For modders starting a new Tiberian Sun mod, it is not required, but highly recommended that you begin with installing the TS Client. The new file structure directly exposes the most critical INI and MIX files of the game, meaning that you don't need to download any special tools for most basic modding.

Features of the Tiberian Sun Client:

List of bugs fixed from original Tiberian Sun and Firestorm:

* This client is not compatible with the official CnCNet client hosted on cncnet.org, but you can play with other players that also use this client.

To install the Tiberian Sun Client, simply extract the files contained in the download into a new, unique directory. This Tiberian Sun package is stand-alone and does not require the base game to function.

For modders with programming experience

If you're a programmer and wish to modify the client, the C# code is open-source at Github.com. Feel free to fork it and do whatever changes you want. We only have a request that if you release a public mod that uses the client, you credit Rampastring of Dawn of the Tiberium Age (the mod that the client software was originally made for).

The hacks and bugfixes written in x86 ASM and C for the Tiberian Sun game executable (Game.exe) are also open-source at Github.com

As most of you have surely noticed, Dawn of the Tiberium Age and Twisted Insurrection got large updates last autumn that also included an entirely new client. However, this side-project of ours was left with the old, by-now horribly outdated client for a long time. Some of you have even been asking for an update in the comment sections. Today the situation has finally changed; the Tiberian Sun Client package has been updated to use the latest, same technology that DTA and TI use. 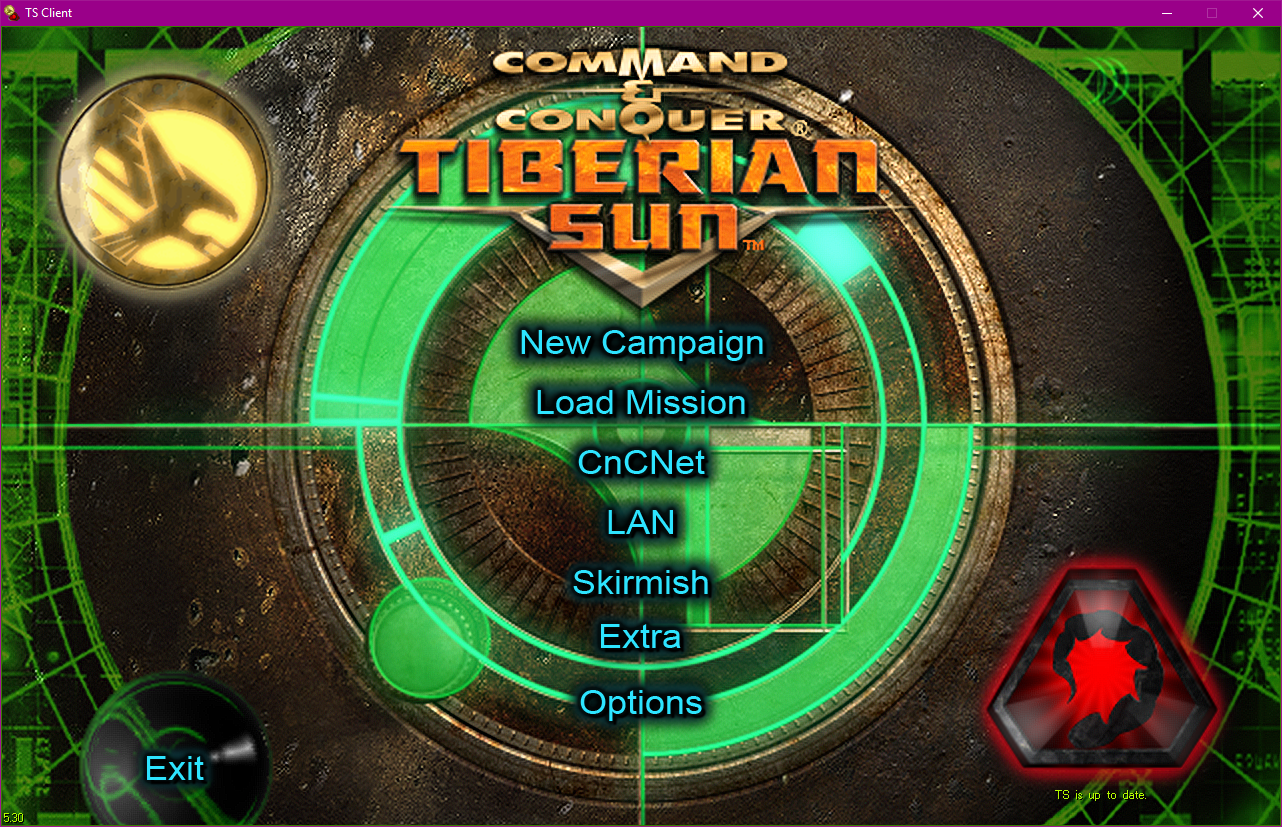 If you want singleplayer campaign videos and want to save yourself some bandwidth, you can keep the video MIX files (MIX\Expand01/02/03.mix) from the old version, download the video-less version of the new client, and then move the video MIX files from the old version to the MIX\ directory that resides inside of the new version's directory. You'll also have to rename the files from Expand01/02/03.mix to Movies01/02/03.mix, respectively. 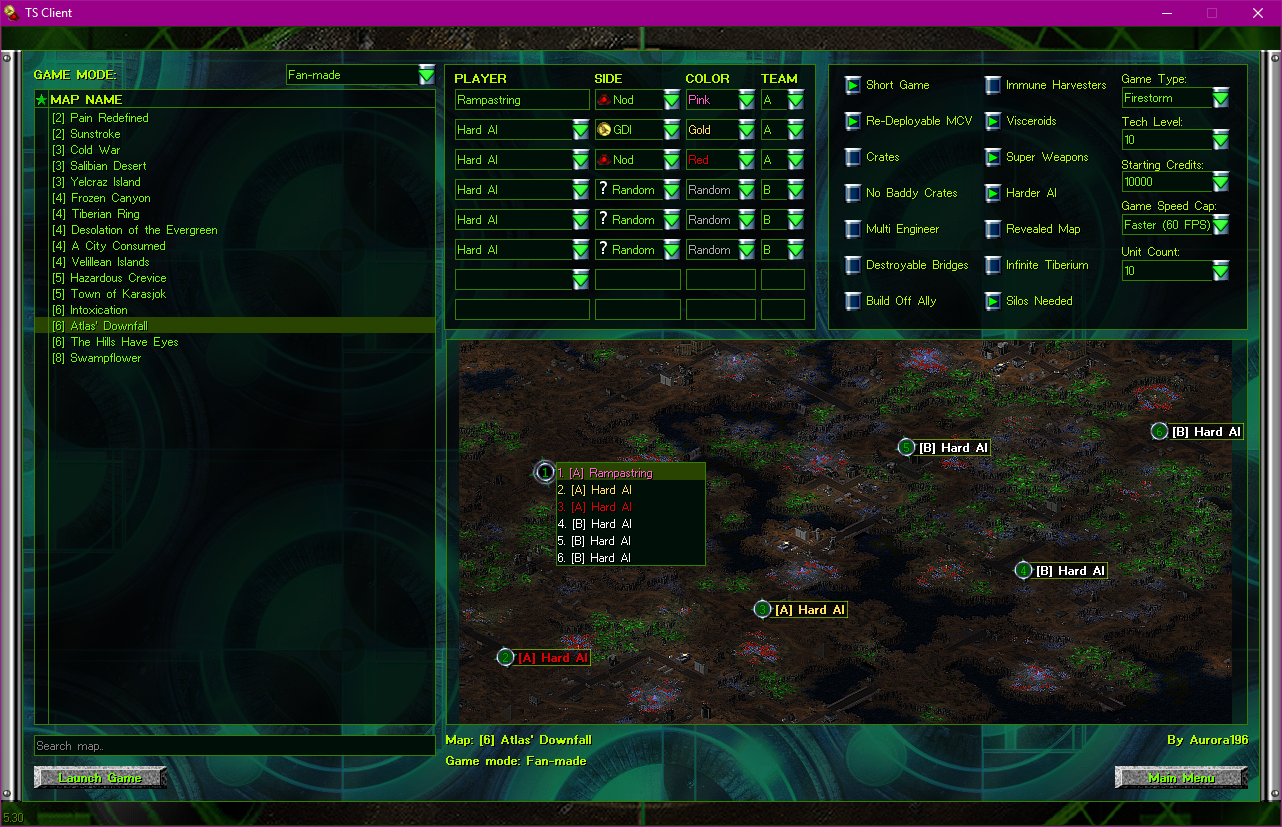 A lot has changed since the old 4.08 version of the client. We don't have a detailed change-log available, however. The development of the new client, that has been re-written from scratch, started roughly a year ago and so all other changes have also accumulated over the year, and in the process we didn't keep track of every single small change that has been done. I did list some of the more important changes in the changelog, but that's only a fairly small sub-set of what a real changelog would look like. Despite the lack of a changelog the project's aim has stayed consistent though; we've only fixed bugs and extended Tiberian Sun. The original gameplay, including campaigns, remains unchanged from Tiberian Sun with the exception of bug-fixes.

With this release I'll also take the opportunity to announce that the client was made open-source a while ago. You can find its C# source code on GitHub at Github.com

In addition to the client, the bug-fixes and feature extensions to the original Tiberian Sun Game.exe file by the CnCNet team have been made open source. The code is available at Github.com. Unless you're very skilled in x86 Assembly language, C/C++ and reverse-engineering, the code is probably not going to be much of use for you however. The repository also currently lacks a few changes that I made for this package's Game.exe; I'll push the changes to the repository within the next few weeks.

With the new spawner and client, it's unlikely that there's all that much to fix or improve in this project anymore. But if something that can be fixed or improved with a reasonably low amount of work is found, we'll update the build as usual. Until then, have fun, commanders!

Lots of work has been done since the release of Version 0.6.5 and we are already nearing our next polished version. Check out the update for more information...

We are thrilled to announce that the man himself, Frank Klepacki, has once again contributed to our original soundtrack. Check it out!

Since the release of 0.6, we've had some major improvements done to the mod and engine overall, check out the update for more information!

Post DTA 1.15 progress and a peek at a few things to come

Several updates have been released since the release of version 1.15 of DTA and we're still going strong. Out of the large number of additions, changes...

The full version of Tiberian Sun + Client version 6.0, including single-player campaign videos. To install, simply extract the ZIP file into an empty...

The full version of Tiberian Sun + Client version 5.30, including single-player campaign videos. To install, simply extract the ZIP file into an empty...

This is the full version of Tiberian Sun, including Rampastring's client.

This is the full version of Tiberian Sun, including Rampastring's client.

Is it possible to introduce an additional setting into the skirmish mode, such as the "smooth development" mode, which works like in the last missions of the campaigns, when the entire map is not available at first, and then "new territories are opened"?
That is, in stage 1 of the game, only a small area of ​​the map around the starting point is available to players, where there is enough space to build a base and collect resources, after a period of time, in stage 2, a larger area of ​​the map (their base + neutral territory) becomes available to players, players can fight on neutral territory, but cannot enter the territory of an enemy base. At stage 3, the entire map is available to players.

In addition to the mentioned EMT, the mobile military factory does not function, instead of assembling it selects a collection point (you can decompose it but not assemble it)
Also, the firestorm does not fully work. It does not shield projectiles, any weapon can shoot through it.

How do you start the Firestorm expansion pack? It automatically starts the regular game with no option to start Firestorm.

They're merged. When you go to New Campaign you can select missions from either TS, Firestorm or the demo and in Skirmish and Multiplayer you can select either Tiberian Sun or Firestorm under Game Mode.

Can you make a YR version with campaign?

I have created a map on here but how do you publish it so I can play with friends on it?

Rated 9/10 because it is a simple yet flawless project that everyone new to the field of modding should look at. I kept it one point out of 10 because it's, unfortunatelly, still quite incomplete.