In which level-building continues; a surrounding view is (likely) done; interior furnishings are made; a minor collision issue is fixed; and a level-exit is added.

This week's screenshot shows a view out to the distant horizon of the new level, level six. Far in the distance are a line of mountains; to the right of that the green grassland fades to yellow, and amidst this stands the city of Tenereth, from which our protagonist most recently came. 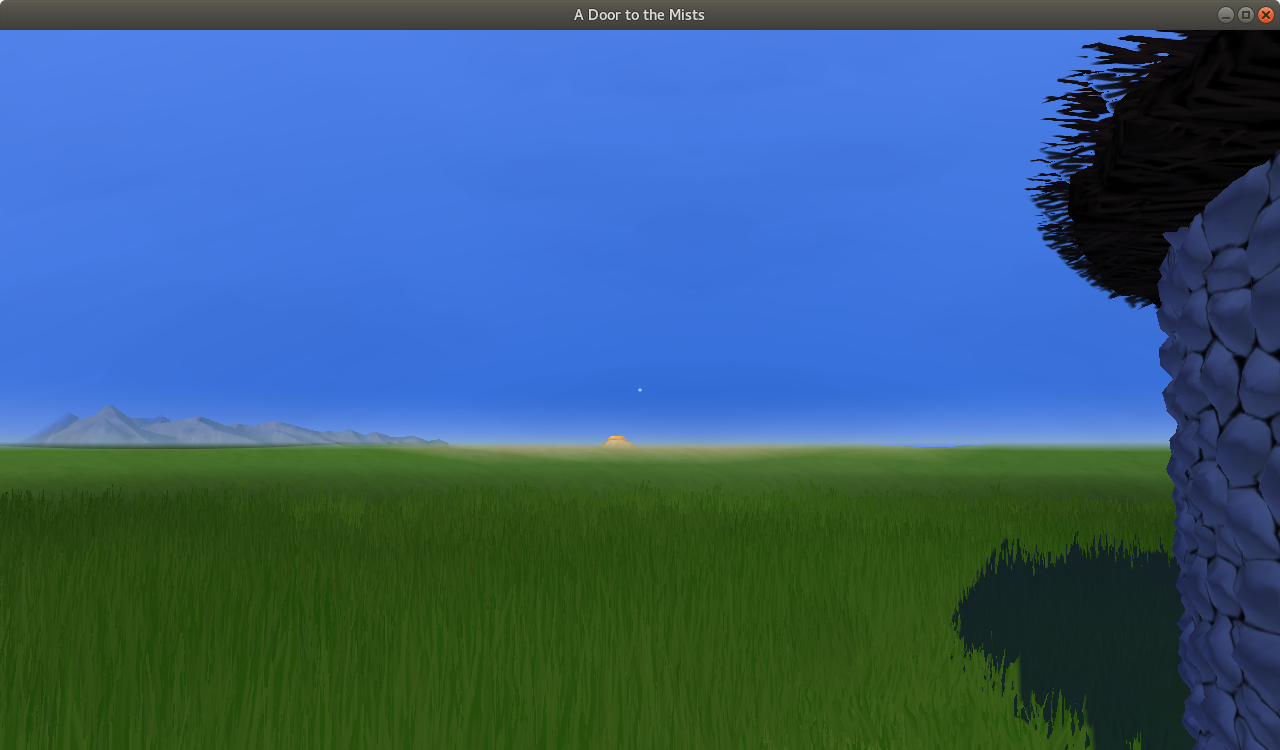 Once again, the week just past was given primarily to the building of level six:

And the biggest portion of that level-building went into the level's surrounding view.

Where such a view was included in previous levels--those being the prologue and level one--a significant portion of the view was separate from the geometry that immediately surrounded the level. Specifically, it was composed of a sort of vertically-rising ring around the level, vertex-painted to represent the various features of the view. This worked well enough in those levels, I feel.

And indeed, I intended to do the same for this level--you can see the all-but-raw version of it as a grey surrounding "wall" in the screenshots of last week's blog post.

However, I found that in this case it was a little awkward to make it quite match up with the nearer geometry.

So I dropped it: in this level, all of the view is included in that nearer geometry.

Doing so did incur some tricky bits; and indeed, I ended up extending the relevant shaders somewhat, and making a separate variation in one case.

And I believe that it works! Despite the view-geometry only really extending a little way, it now appears, I feel, to stretch to the edge of the world, fading into the distant haze. ^_^

In the first screenshot above we see the view in one direction; here then is the view in another, showing the land rising into low hills: 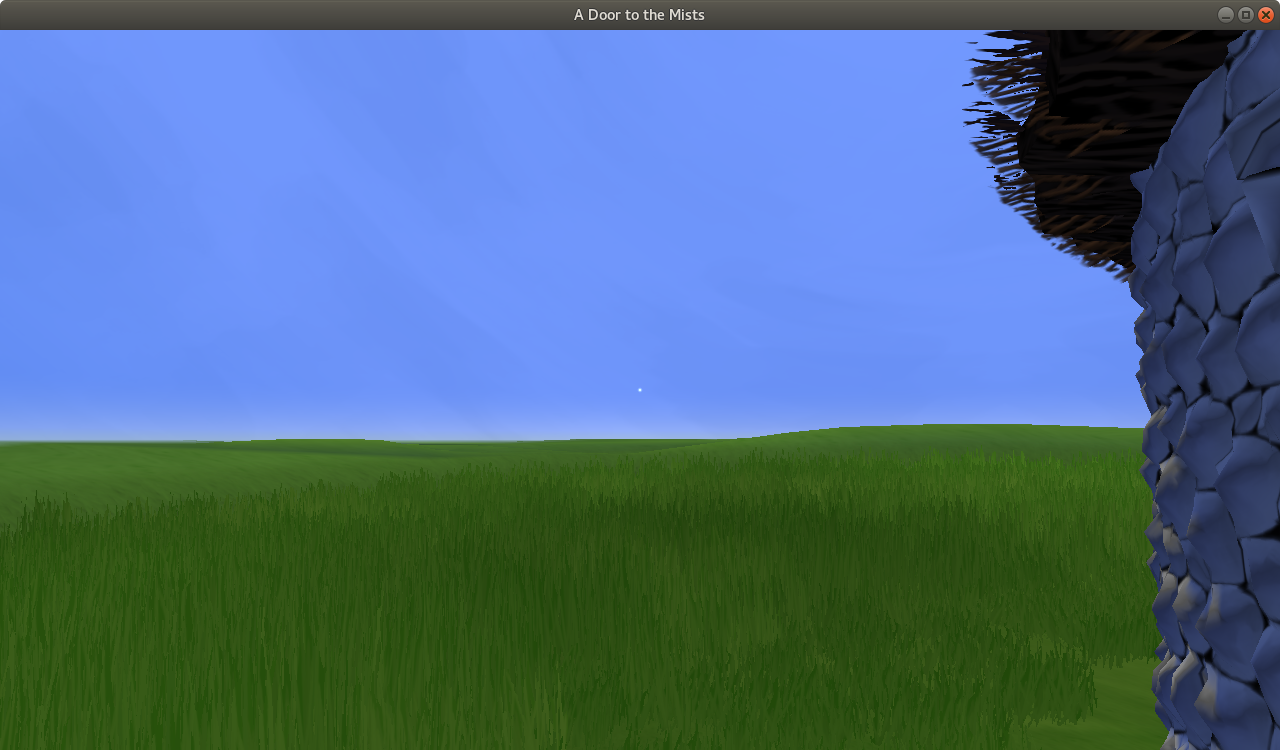 With the view pretty much done, I think, I moved on to the interior of the little building that is the main of this area.

The furnishings here are very simple: just a straightforward table, and a set of basic shelves. The table holds little of great interest. The shelves... well, don't hold much of interest yet. ;)

(That said, I didn't say that said furnishings are all that this area will contain... ;) )

This work is largely done, I think, save for a few touch-ups, and for the contents of those shelves. 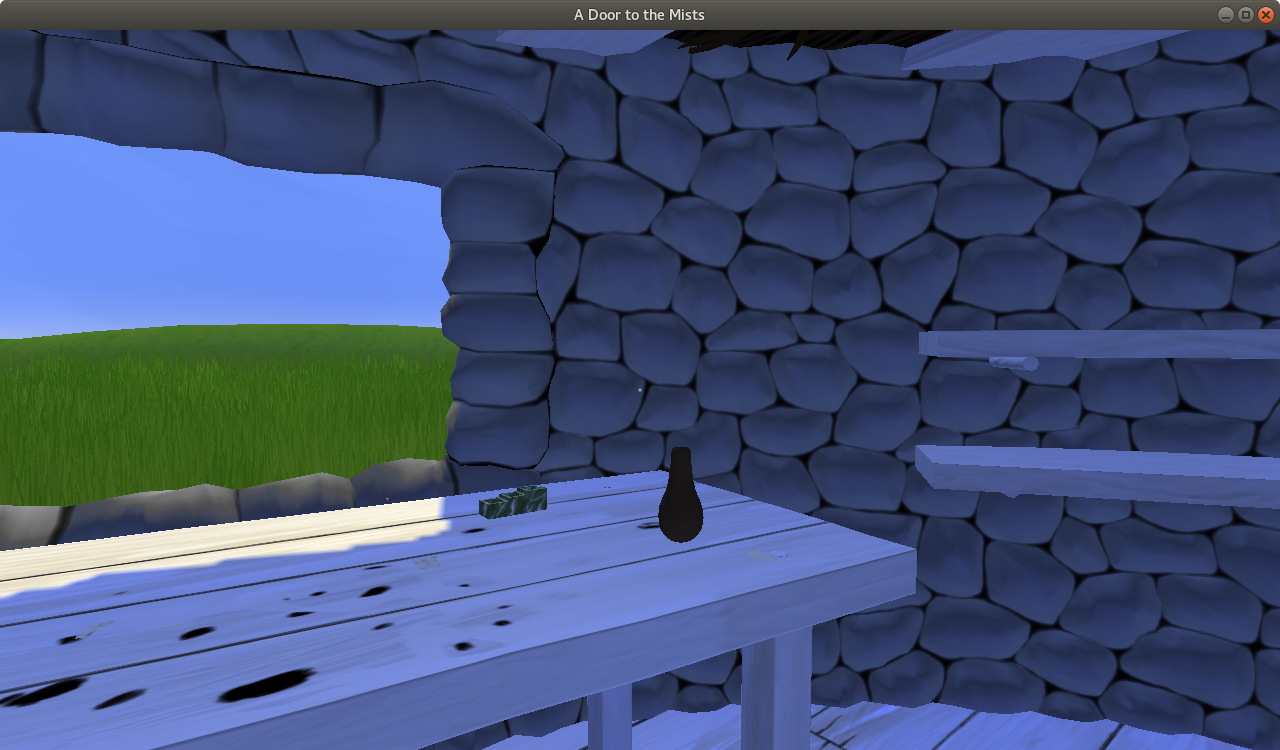 I also discovered and fixed an issue with the floor-collider of the building--collision geometry and scaling factors don't mix well (in this physics engine, at least)!

And finally, I've added a start to the exit-object for the level. This takes the form of a cylinder surrounding the central building, and both allows the player to leave for the next level and prevents them from wandering into the surrounding grassland. None of the specific logic for this exit is yet in place, but the thing itself is there.