The Team from Tiberian Sun Rising would like to wish everyone a Merry Christmas, hope you had a fantastic Christmas and got plenty of neat presents & time among family. This update is a little different given the journey that was taken on the Tiberium Refineries Development we choose to highlight its evolution & the story behind it from our very own Concept Artist, D14810: 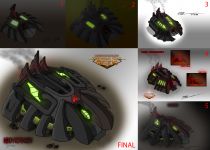 The Brotherhood of Nod has started constructing new Tiberium Refineries with the advancements in Tiberium Refinement Techniques and technologies since the First Tiberium War. The Nod Engineer in charge of the development, here is an excerpt from his Journal on the journey of designing the Nod Tiberium Refinery detailing the evolution of its design.

Someone wrote: TSR was looking for new concept artists which I quickly applied for, in hope of working together with people on a mod for C&C, which I have a great passion for. Being a part of the TSR team means a whole lot to me. I had only just joined the team a couple of weeks earlier when I was asked to make a concept for the NOD refinery.My drawing skills has greatly improved through the process of these concepts, which is quite noticeable if you compare the first concepts with the last ones. All in all I have learned much, and had a lot of fun as well.

As I where assigned to try and make a concept for the NOD refinery, I started to look through all the NOD renders from Tiberian Sun to get deeper into their design. I also played the game a couple of hours to try and catch a better view at NOD as a faction and their whole atmosphere. Even though my skills at that time where limited, I thought it where important to try and implement every aspect to get the design right.

With the very first concept I tried get it to look as much NOD as I could. The NOD obelisk and the NOD temple is some of the best examples of original NOD design in my opinion, so I tried to implement a bit of their design values to the refinery I where drawing. 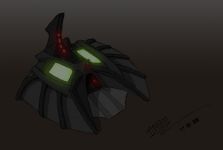 I tried to go with a more advanced design for the second concept. The design itself has three spires at the back and a wider build. Adding pipes to the structure also gave it a more industrial look which suits a refinery. 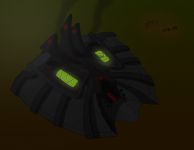 The third design became very unlike the first two. I kept the spire at the back, which in my opinion symbolizes NOD. I also kept the round edges on the front, but made the whole build a lot tighter with boxy edges. At this point I felt I had improved a lot at doing concept but fact was that the design didn't suit NOD well, so a version 4 was immediately put in progress. 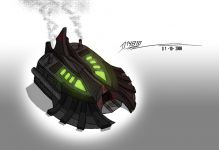 I got a lot of useful feedback that I tried to implement into the fourth design. I took it back to having three spires, again because it made the building feel like it belonged to NOD. I focused on going in details with every aspect of the building. It still has a quite boxy look, but also has a few new industrial looking features. I made a version 4.2 because of feedback about whether the smoke pipes should be in the middle of the building or in the spires. Even though a lot attention where put into each detail, the building all in all where not sufficiently comparable other NOD designs. 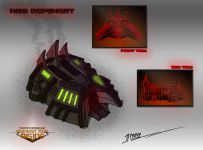 For the fifth design I went back to basics. I played the game over and over again as when I bought it back in 1999. One night I stayed up till 5 am drawing and drawing on the new design. I went with a whole new design, but with a few elements from the earlier concepts. I made a large pit under the building which holds a lot of refining equipment and machinery, with the building itself having "arms" on the ground around it. The building itself became quite large and evil looking. Feedback suggested that this design where just too "awesome", and a final version would be necessary. 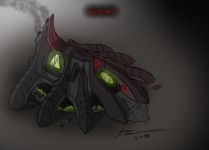 A lot of good feedback from the fifth concept suggested that the final version would be good with elements from the previous concepts I've made. I took the side-parts from version 2, the roof and building size from version 4 and the front-part from version 5. The final concept could easily have been done with some nifty Photoshop cutting, but I decided to build the design up from the very ground again. I mostly focused on having the so called legs looking right while still matching the roof and the front. I kept the pit, since it would be a visual treat for the player to be seeing the mechanics. I made three different color schemes to see what would fit the building best and add the most NOD factor. 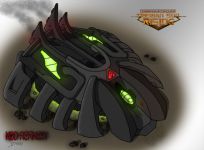 It's important to try and have all the different aspects in mind when doing concept such as this. Exactly that was the hard part about making the refinery. It always felt like there was something missing in the concepts one way or an other. Often I didn't realize this at first, but good feedback from other team members greatly helped to find the missing links. I personally think that 6 tries to get the design right is much, but if that's what it takes to get it right, then it's definitely worth it in my opinion. It's a mod of great quality, so having some things take extra time, is not wasted time at all.

Overall I am very happy with outcome of this process and I hope I'm not the only one who thinks it was worth it. Even though it has been long and sometimes quite a puzzle, it has been fun, and I have learned a whole lot.

nice i like all of the layouts they look badasss

those are some nice concepts right there :)

5th looks best. last one has no features that makes it look "refinery."

Very good work, I must say though, That I do like the 5th one the best.
But whatever you go with will be very epic.

Based on feedback so far, we might make a few little adjustments to the final, but it'll look even better once modelled & textured ;).

You are a great concept artist! you guys are making the best TS mod Ever! keep it up and keep injoying your work!