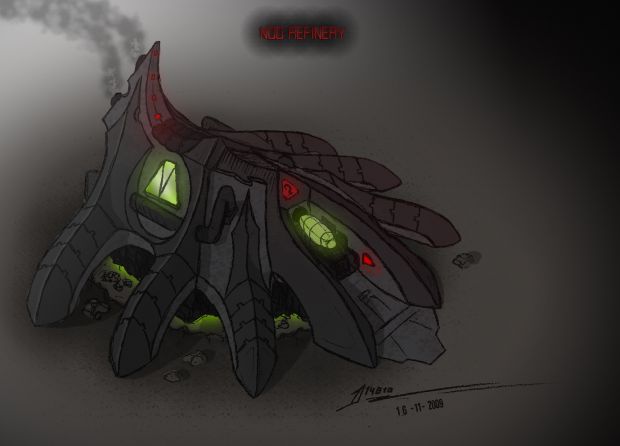 I prefer this one personally.

Yes, this one is the best.

Reason we didn't use this one is it has similarities to the Temple of Nod, and outclass's it in coolness. Which the Temple of Nod should be the most Awe inspiring structure on Nod so it was toned back a bit. And elements from all Refinery Designs were used in the final design.

aaaaugh...you should have gone for 5th, in spite of the reason you already stated.

This concept was better detailed/shaded/colored is the main reason it looks better. By the time the final is modelled and skinned you'll be in love with it.

For the fifth design I went back to basics. I played the game over and over again as when I bought it back in 1999. One night I stayed up till 5 am drawing and drawing on the new design. I went with a whole new design, but with a few elements from the earlier concepts. I made a large pit under the building which holds a lot of refining equipment and machinery, with the building itself having "arms" on the ground around it. The building itself became quite large and evil looking. Feedback suggested that this design where just too "awesome", and a final version would be necessary. -D14810