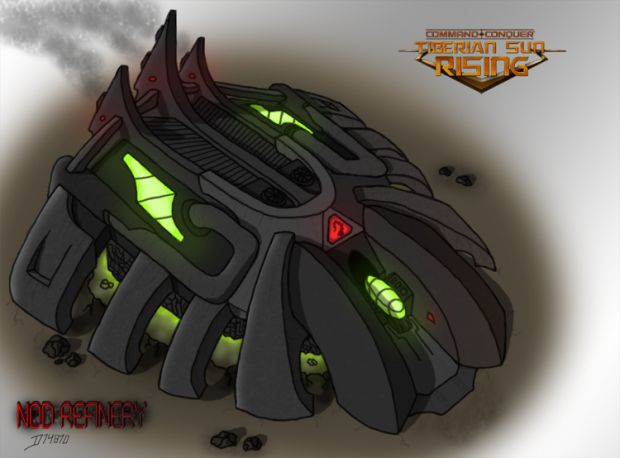 where the harvester comes to drop out the Tiberium?

I have one guess, at the back...or am I just dumb not to see where the harvester goes...?

I absolutley love your concepts, great work. The forth design really caught my eye, and imo I think that was the best one you did and it represented what Nod is all about. This final design on the other hand looks very beefy, thats more of a GDI style. However you know your work best and im rather impressed with this.

Credits to D14810 on our team, he's the author of this concept all of the Nod Refinery ones infact.

A lot of good feedback from the fifth concept suggested that the final version would be good with elements from the previous concepts I've made. I took the side-parts from version 2, the roof and building size from version 4 and the front-part from version 5. The final concept could easily have been done with some nifty Photoshop cutting, but I decided to build the design up from the very ground again. I mostly focused on having the so called legs looking right while still matching the roof and the front. I kept the pit, since it would be a visual treat for the player to be seeing the mechanics. I made three different color schemes to see what would fit the building best and add the most NOD factor. -D14810