Tiberian Sun Rising is a total conversion modification for Command & Conquer 3: Tiberium Wars, which see's the return of the Global Defense Initiative and the Brotherhood of Nod battling it out during the the Second Tiberum War! retelling Tiberian Sun like never before.

A Whole New Tiberian Sun!
Not just a remake, but Tiberian Sun Rising is the next evolution of Tiberian Sun! It's time you saw the future, while you still have human eyes! Having been redesigned from the ground up to include all the things you love from Tiberian Sun, with new features, abilities, units and gameplay better than ever. We take the mindset that this is the first time Tiberian Sun is being made as an original game as a design concept/mindset for our development.

This mod will include the additions made in the expansion Firestorm as well they will make a return with a new spin. This mod promise's to do a lot and we'll be bringing back the thing's you love from Tiberian Sun-like. Stealth technology, Real Tiberium, Subtterain Units the Firestorm Defense system and more!

Battle the Elements!
One of the most exciting feature's we'll be including is a dynamic growing Tiberium environment which mutates the battlefield as it spreads! You could start on a map with not much tiberium at all, and finish the battle with Vein Holes, Ion Storms and more all occurring! So watch out!

Join our new Official Discord Server for Tiberian Sun Rising!
Thank you so much for your support in voting us into the Top 100 Mods for 2019! Apologies for a slight delay in getting this update out. We've been working round the clock since our previous update on something special for you all pulling some pretty late hours. While we continue to work hard on this special surprise we wanted to bring you some more of what we've been working on for Tiberian Sun Rising. Today we'll be taking a look at the Cyborg Commando we previously showed our new concept design for our take on the Cyborg Commando here in an earlier update. Now in this update, ts been brought to reality by the incredibly talented "Arfa" who brought this to concept to life. We've also got our first look at the Cyborg Reaper finally in-game! A GDI Amphibious Carrier had an interesting encounter with a new unidentified vehicle of Nod design an image has been reconstructed from the Amphibious Carriers black box recorder that was damaged in the fight. What's quite alarming is how quickly the Amphibious Carrier seemed to have been destroyed.

A reminder that you need to vote again if you would like us to win MOTY 2019, after making it into the Top 100 this is the 2nd Phase of Voting, if you'd like to support us for Mod of the Year please make sure to vote again for us. VOTE HERE 24 hours remain. 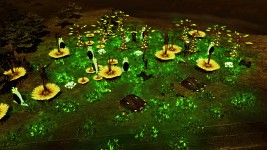 They will know fear! The Cyborg Commando Ingame!

The newest model of the Cyborg Commando mechanised combat skin has proven extremely effective in field tests. The Plasma Cannon adapted from the advancements made from the Banshee Prototype and working from the Tacitus. It is savagely powerful ripping through the toughest steel armour and boiling the flesh of its victims. If that wasn't enough the wrist-mounted flame thrower on its offhand makes short work of infantry that gets up close and allows the Plasma Cannon to focus on armoured targets. The Cyborg Commando is truly a terrifying sight to behold burning through GDI Titan' Mech's like butter. 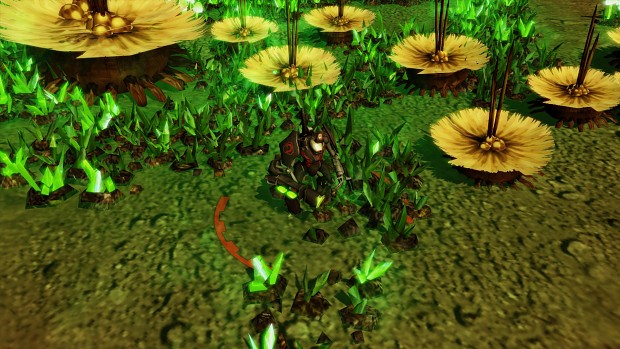 "I can smell their fear" 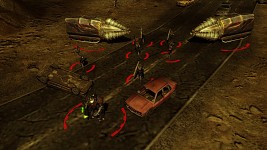 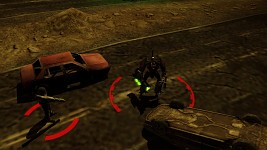 A Culling is at Hand Human! The Cyborg Reaper

Datalog: I took the initiative of creating a new class of Cyborg to utilise for my own purposes. Behold my Children! I call it the "Reaper" the Cyborg Reaper utilises a new Mechanised weapon platform of my own design. To increase a cyborgs speed and ability to traverse more difficult terrain with ease. But also so heavier weapons could be attached without slowing the Reaper down. Armaments I've equipped the Cyborg Reaper with twin Multi-Missile launchers and packed in a Web Launcher to immobilise enemy infantry. 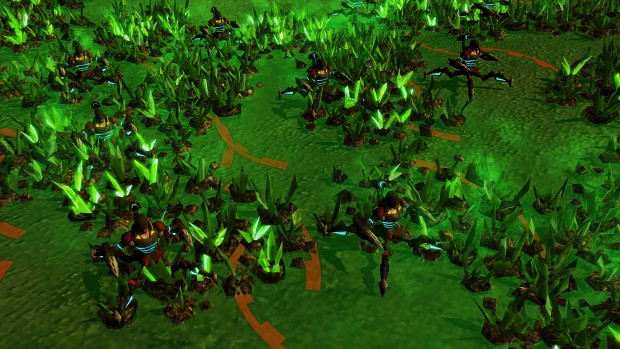 With demand for Cyborg troops increasing for the Brotherhood of Nod supply has not been meeting demand. I sent out Cyborg Reaper teams to harvest mutant vermin and humans for their organic components. They will be turned into superior cybernetic creations. As I have orchestrated from the beginning. The Cyborg Reapers have proven far more effective than previous methods of gathering humans for Cyborg Processing and has reduced both mortality rates and escape drastically. 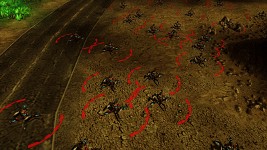 We've interviewed a Shiner with an interesting report while suffering from deep trauma. He is the 5th such report from a member of the Forgotten. He claims to have encountered what he calls a "Reaper" that they came two by two, rings of blue and took his entire village. "They were webbed up by this strange spiderweb-like material they have and I watched in horror as they took everyone!". This is the 5th such village their entire mutant inhabitants just disappeared and forgotten.

GDI's General Soloman claims the reports of "Reapers" are a Shiner myth.

When we pressed the GDI Defense Council for further comment on the situation we had the following response.

"Ah yes "Reapers" an army of spiderlike Cyborgs allegedly waiting in Tiberium Red Zones, we have dismissed that claim"

The GDI doesn't seem to be taking the issue seriously but it is true that there isn't one shred of evidence to back up the claims of these Forgotten Shiners. Is this a just a tall tale the shiners version of the boogeyman? Or is this a new terror of the night? You decide, that's it for W3N news tonight! 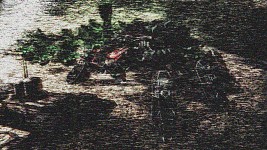 Our sources within the Brotherhood haven't mentioned or revealed any intelligence on whatever this is. Is this a new kind of Terror weapon? Some kind of advanced weapons platform? We can only speculate, for now, the Brotherhood of Nod's technology continues to advance at a rapid pace with unexpected developments. What is Nod's secret? We'll provide extra guard patrols on the next amphibious carrier we send out we need to gather some more intel on this new Nod unit.

Tiberian Sun Rising - Got a present for ya! Discord Server and GDI Commando

Tiberian Sun Rising continues our march on the road to deliver you a beta version. We now have a Discord server! In this update, we'd like to introduce...

We made the Top 100! Vote for us again to be the Top Unreleased Mod for 2018! Support the Tiberium Transformation of the planet and our species!!! Today...

Tiberian Sun Rising - "The World is Transforming Itself"

Transformation is here! The world is transforming itself, into an Eden a paradise awaiting the birth of a new race! Watch as Tiberium spreads and mutates...

In this update, we are looking for some 3D Artists to join our team, Level Designers and 3D Animators. We have to show you Automatic Gates, the Cyborg...

As a thank you to all our fans and supporters we present to you a collection of exclusive TSR avatars for your use.

[TSR Soundtrack] Secrets of the Scrin

Currently I'm satisfying my needs for Tiberium in Rimworld with the TibRim mod. That mod is also a work in progress and with many bugs, but it's also something available for everyone to try at their own risk.
And not too long ago, the guys behind Renegade X announced they were working on Renegade X Firestorm. A tiberian sun add-on for Renegade X.

Coming back to this mod, the very first published info of Tiberian Sun Rising what I could find was released in 2006, that was 14 years ago. And also from my understanding, nothing but screenshots and concept art has been released in that amount of time.

I can imagine it's much more difficult to have team of modders than individual people as coordinating, people leaving the project and life in general can slow things down
I must congratulate and respect the mod team for not giving up on or cancelling the project to this point. However, 14 years IS a long time. One and a half decades have passed since the announcement of this mod and to this day nothing has been released to people to try for themselves (as far as I know).
There aren't plenty of other Tiberium mods out there, but those that exists are quite good. Have fun with those, I highly recommend it. Or play the remastered versions of Command & Conquer and Red Alert, that is also an option.

I do wish to apologieze if I sound a bit negative, but what can I say after 14 years? That amount of time can really change your perception of things. After 14 years I personally no longer see the point of this mod to continue its development nor waiting for it.

But of course, I could be gravely mistaken. This mod could turn out to be great if it ever sees the light of day. But to continue waiting for that day isn't worth it, life is too short. As mentioned before, there are other fully playable Tiberium related mods out there, play those instead. Don't wait for this.

Have a wonderful day everyone, including the mod team.

I check in on this mod maybe 2 or 3 times a year purely out of curiosity at this point. I have been following it since 2006/2007 and I honestly gave up hope of trying it long ago as well. At this point, with the success that the CNC remaster has been getting I'm kind of hoping that they give Tib Sun the same kind of treatment. I think that is a more likely outcome than seeing this mod complete at this point.

hmm soon we will get renegade Firestorm too... u know? the mod/game that everyone waited for SO MANY years! is finally happening!!!
so any beta release yet?.... (plz give an answer which doesnt make me feel like a fool xD)

It would be cool if you used the TS installer for TS:R, which would set the mood for the mod, but is it too much work?

You're not the only one my friend.

Well i hope to be able to play Tiberian Sun Rising, before the end of the world, but it seem that will not the case

No, we're looking good to be done before the world ends (so far). While the current situation is pretty stressful we are still working on things towards release.

They've already released half life 3(Half life Alyx) and haven't released a beta yet. Lol

I mean, they only advanced the story by about five or ten seconds.