Experience Erebor, the greatest kingdom in Middle-earth, a new map coming in the next release of The Age of the Ring alongside the mighty Dwarves. The beauty of this fortress is legendary, take a dive into the literature and research that inspired it, learn more about the features exclusive to this map.

Posted by MattTheLegoman on Jun 1st, 2018

Dark fills the room, and your fireplace dies down as shadows are lost; still, the Dwarves play on. And suddenly first one and then another begin to sing as they play, deep-throated singing of the Dwarves in the deep places of their ancient homes.

The world was young, the mountains green,

No stain yet on the Moon was seen,

No words were laid on stream or stone

When Durin woke and walked alone. 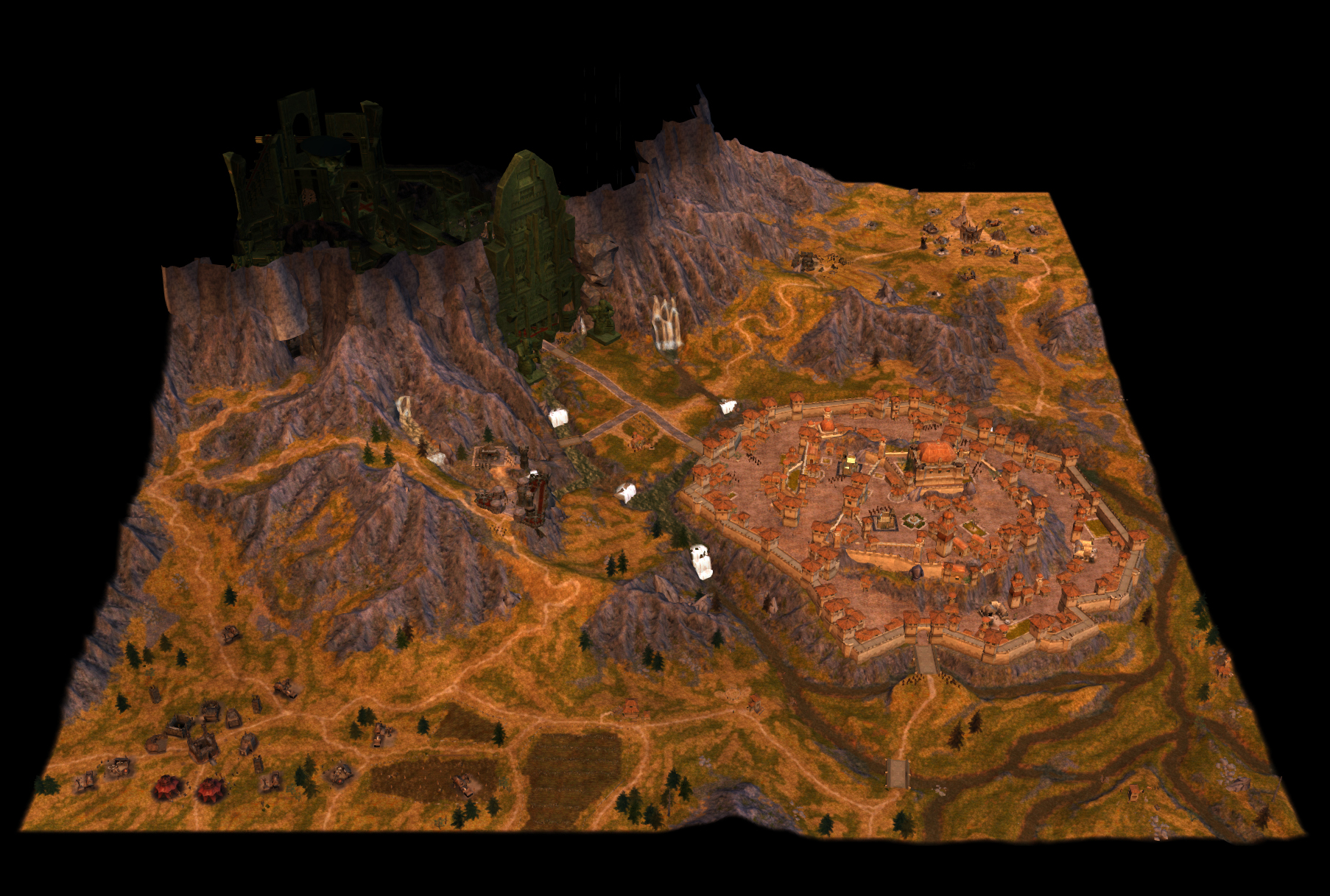 Their story began long ago, deprived of Gundabad, most sacred of the Dwarf Holds and fleeing from Dwarrowdelf, oldest of the Dwarf Holds. Gundabad had been defiled by Orcs in the Second Age; afterwards, an ancient terror filled the halls of Khazad-dûm and during the Third Age, Durin VI was slain, refugees spoke of fire wreathed in shadow.

The world is grey, the mountains old,

The forge's fire is ashen-cold;

No harp is wrung, no hammer falls:

The darkness dwells in Durin's halls;

A people homeless, Durin's Folk became estranged from kin, scattering across Wilderland; seeking new homes in small, distant outposts (1). King Thráin I settled beyond Mirkwood, in an ancient mining colony in a lonely mountain far away, where he sought to build his kingdom. The diaspora had caused his people to become fractured, and soon the throne removed to the rich Grey Mountains.

The wind was on the withered heath,

But in the forest stirred no leaf:

In new mountain holds, the Dwarves believed their excess of wealth was safe, but cold winds blew from the north, a plague of dragons descended. In the Wars of the Dwarves and Dragons (2), mansion after mansion they fell to ruin. King Thror, unable to unite his people, wide and distant were they, removed what little gold remained and reestablished the throne at the Lonely Mountain.

The Dwarves of yore made mighty spells,

In hollow halls beneath the fells 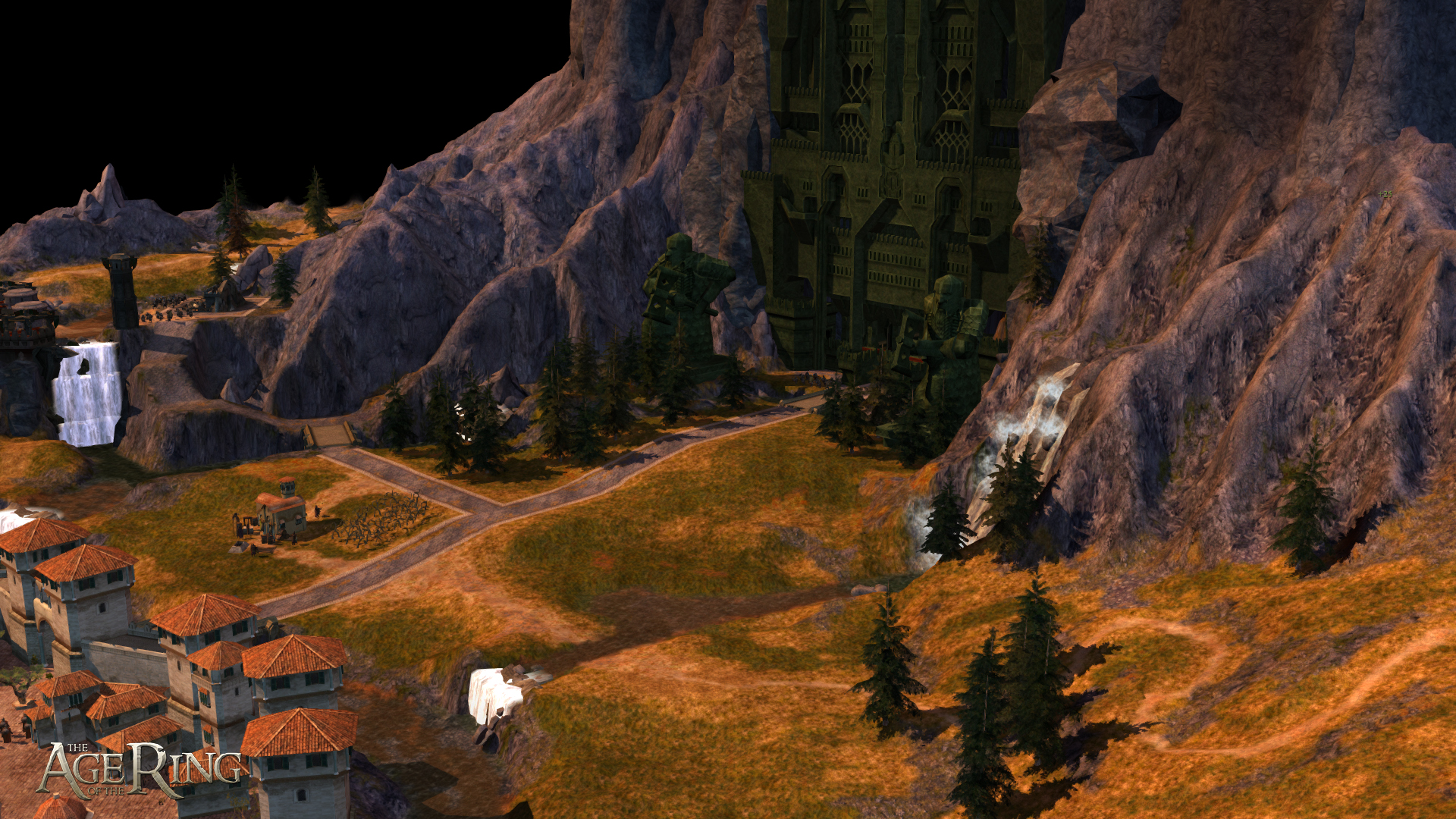 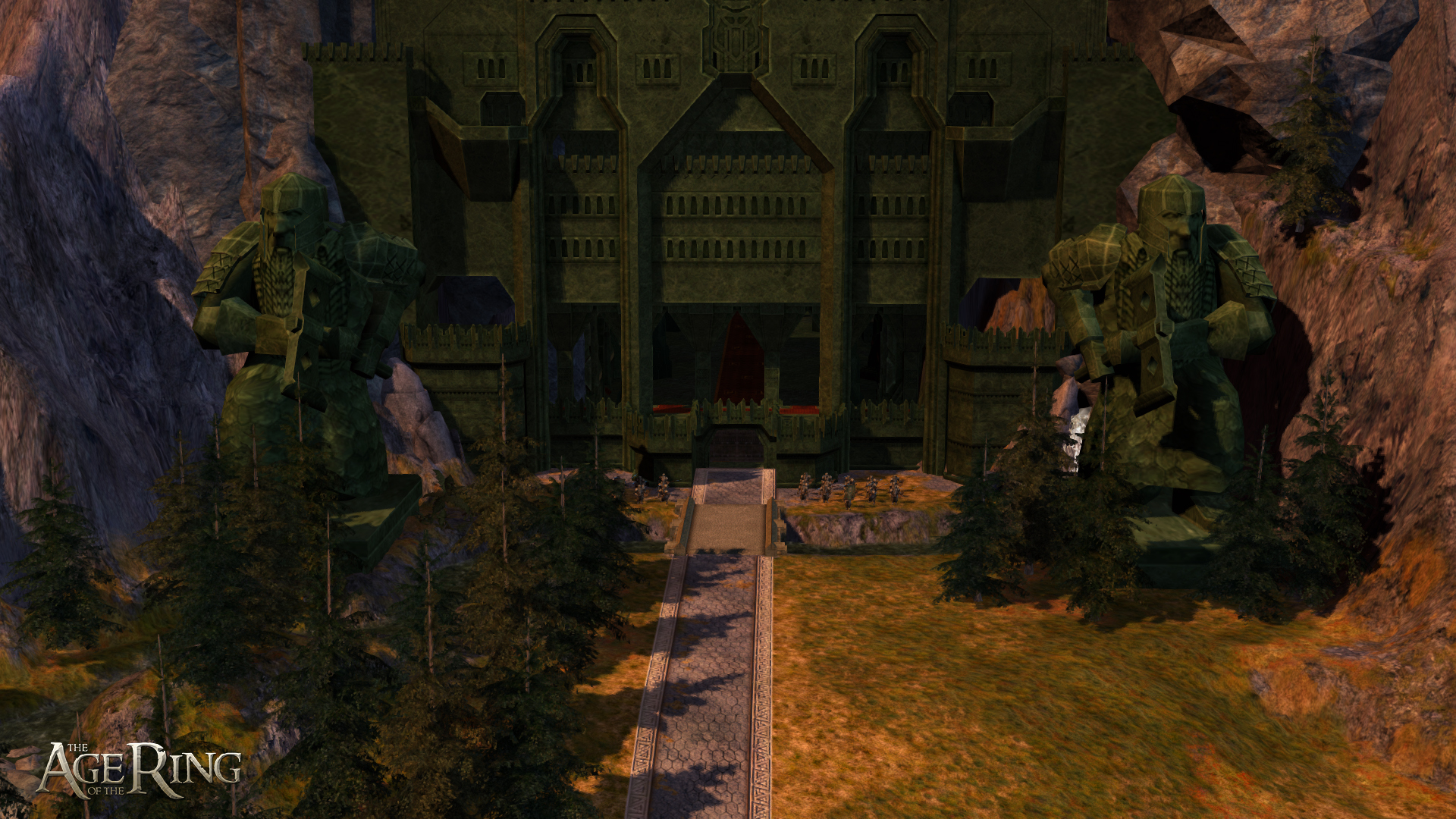 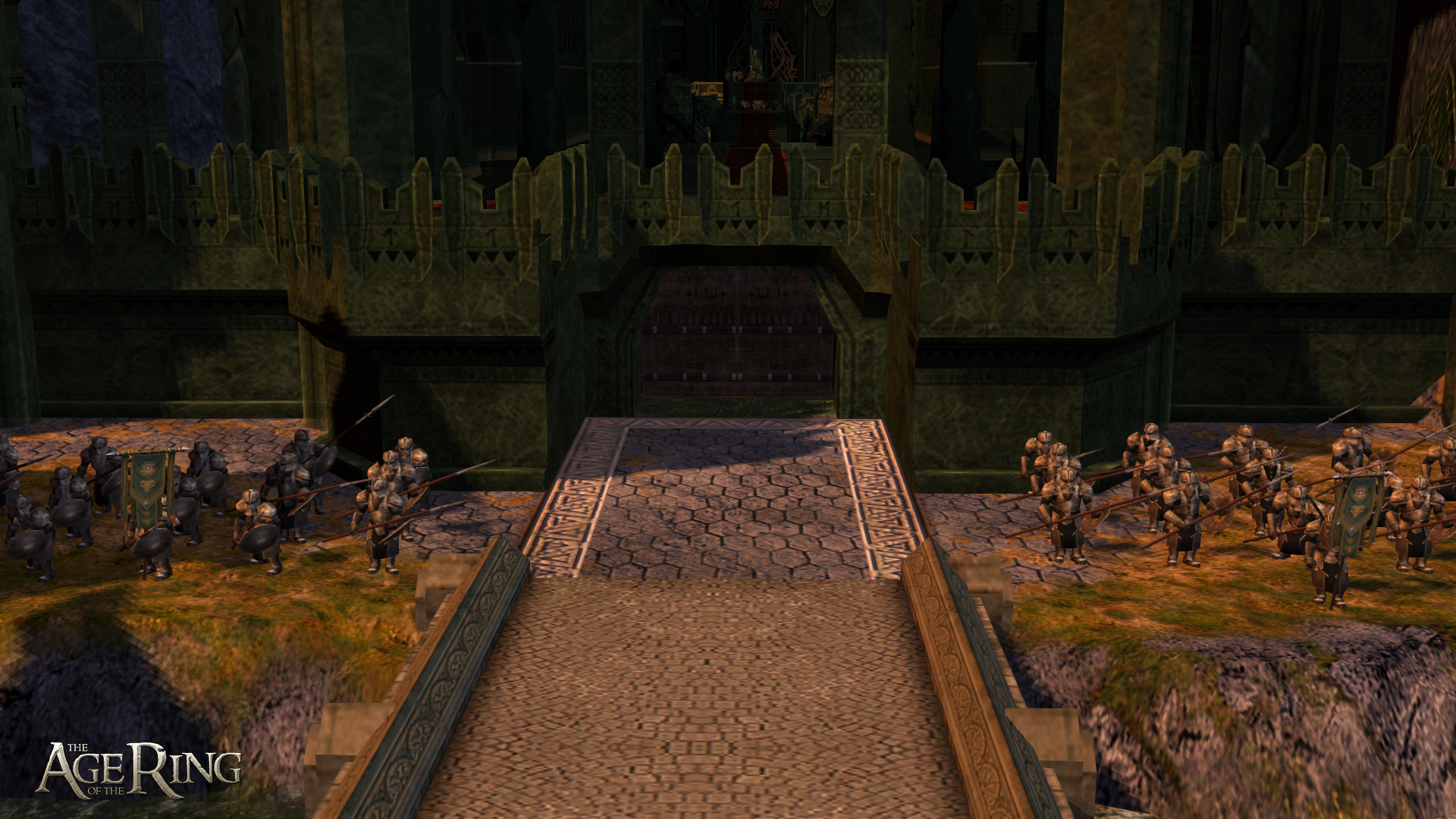 The Lonely Mountain dominates the eastern lands of Rhovanion, its dark head three and a half kilometres tall, rising from valleys of pine forests. Its body, formed like a star, six ridges stretched far into fertile grasslands watered by high mountain springs.

Goblets they carved there for themselves

And harps of gold; where no man delves

There lay they long, and many a song

Was sung unheard by men or elves. 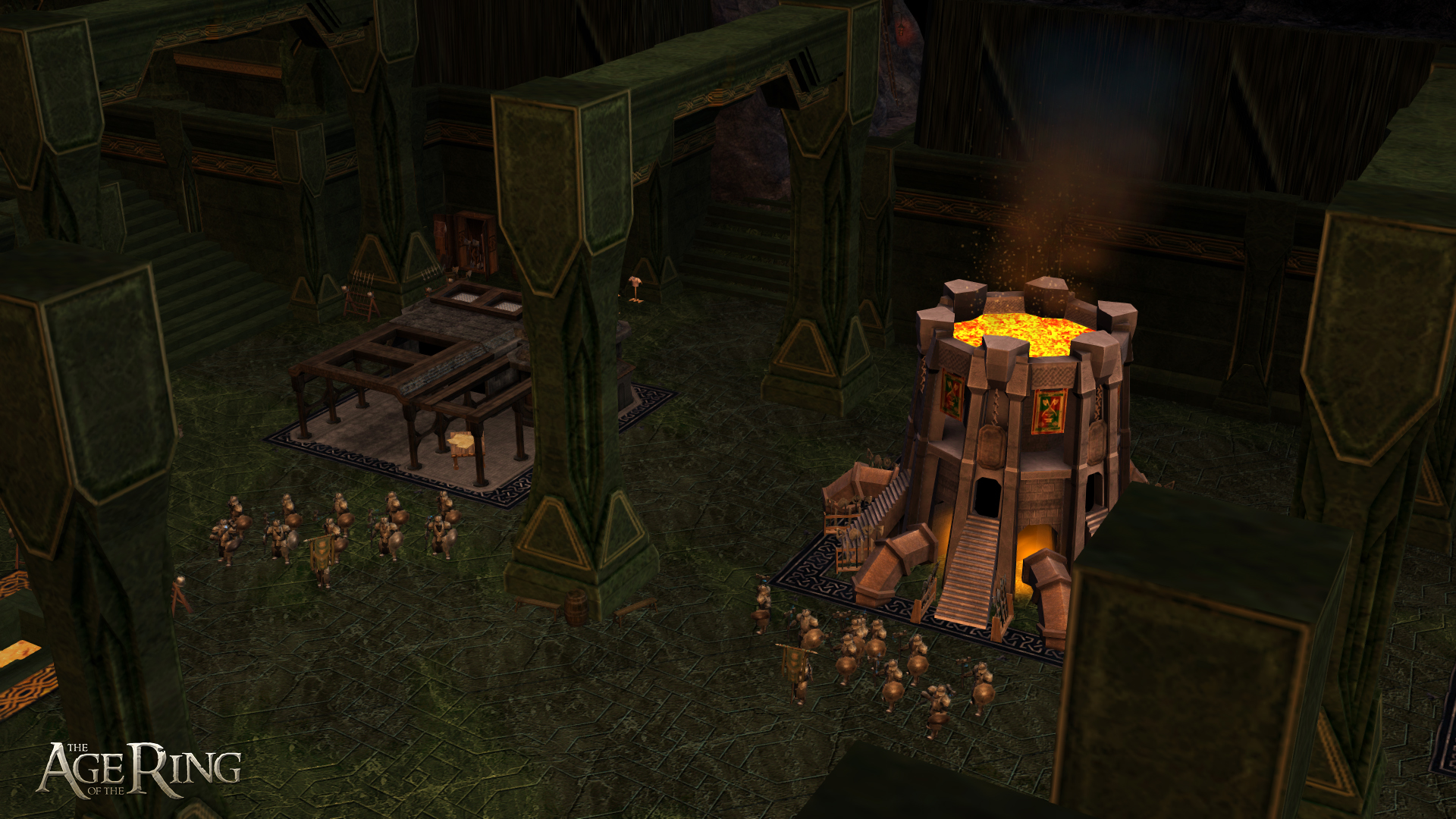 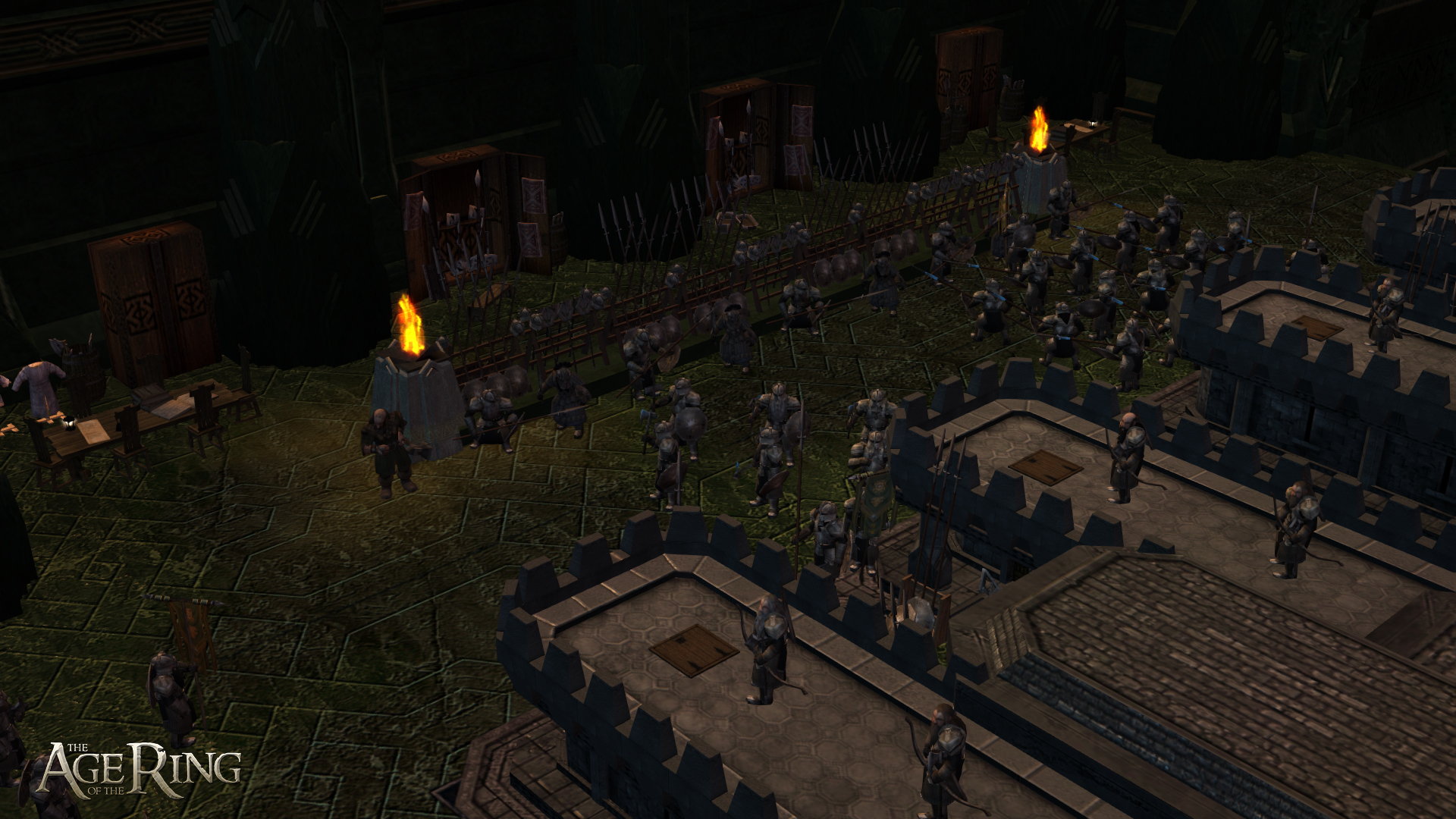 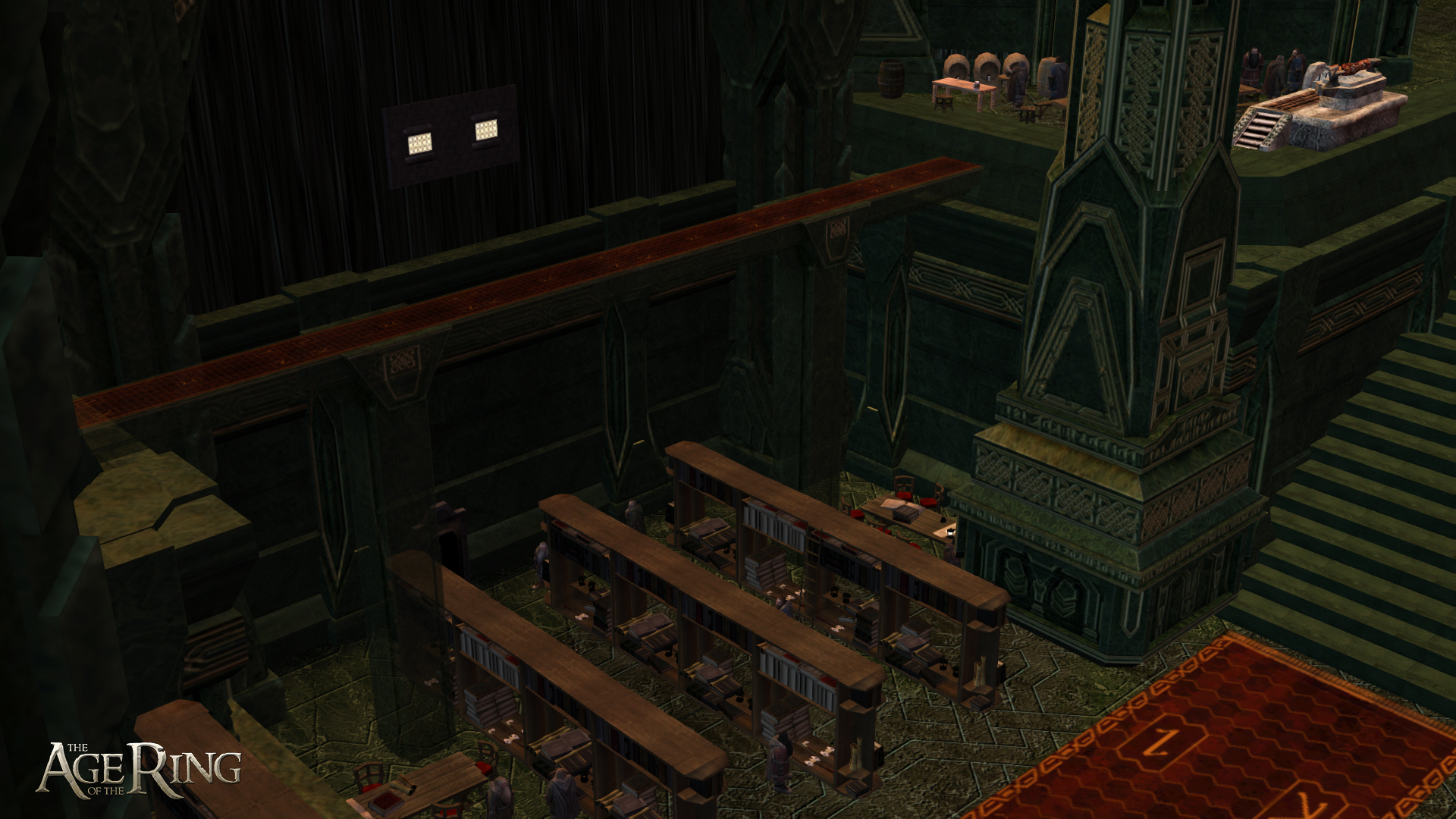 Erebor became the greatest kingdom in Middle-earth. Stronghold of Thror, King under the Mountain, now the mightiest of the Dwarf Lords. The beauty of this fortress city was legendary. Its wealth lay in the great seams of gold quartz running like rivers through jade marble. And may the heart of the mountain, the Arkenstone, unite all Dwarves in defence of this Dwarf Hold.

Her fate unknown, the Arkenstone

What was stolen, must be returned 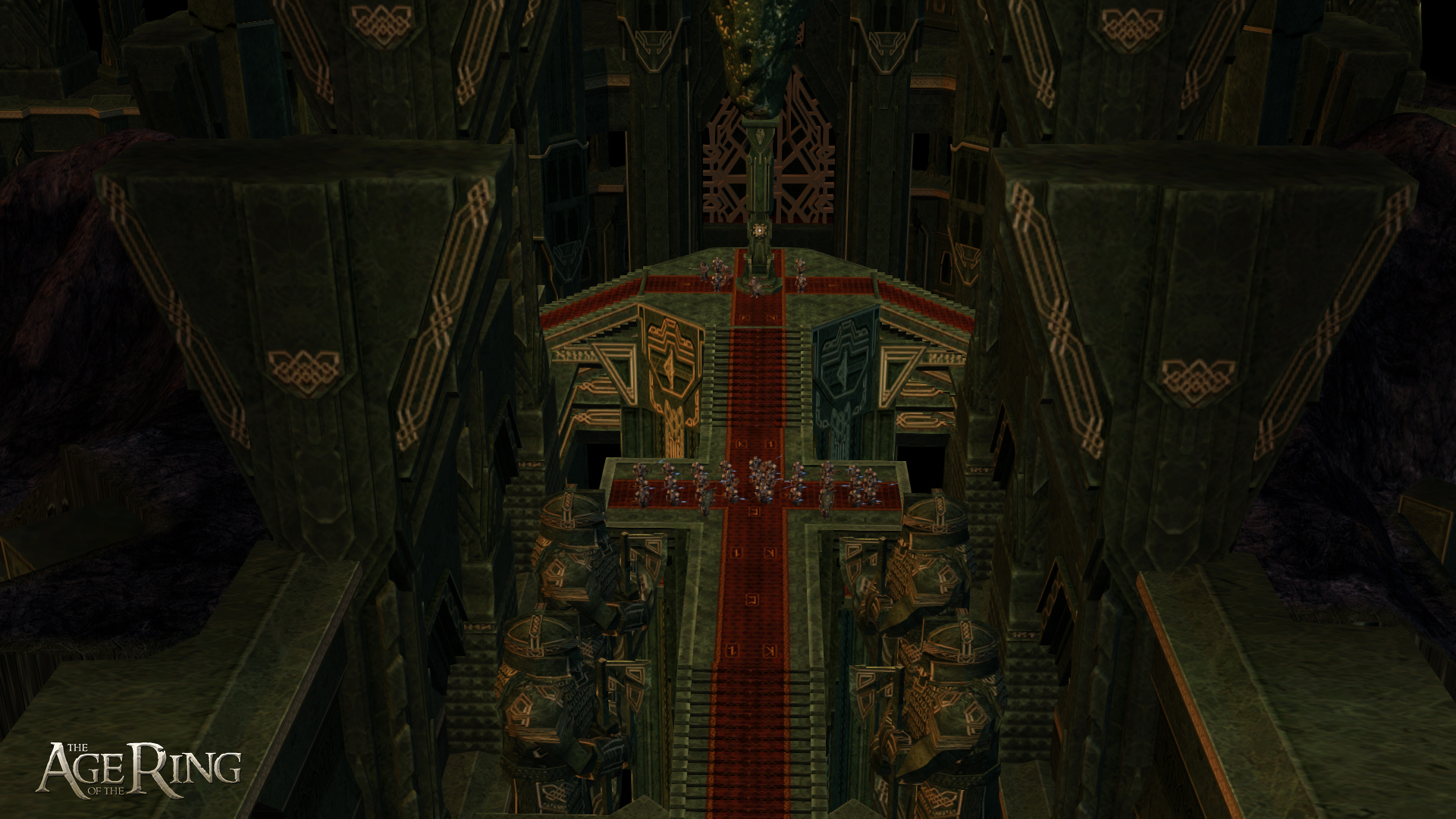 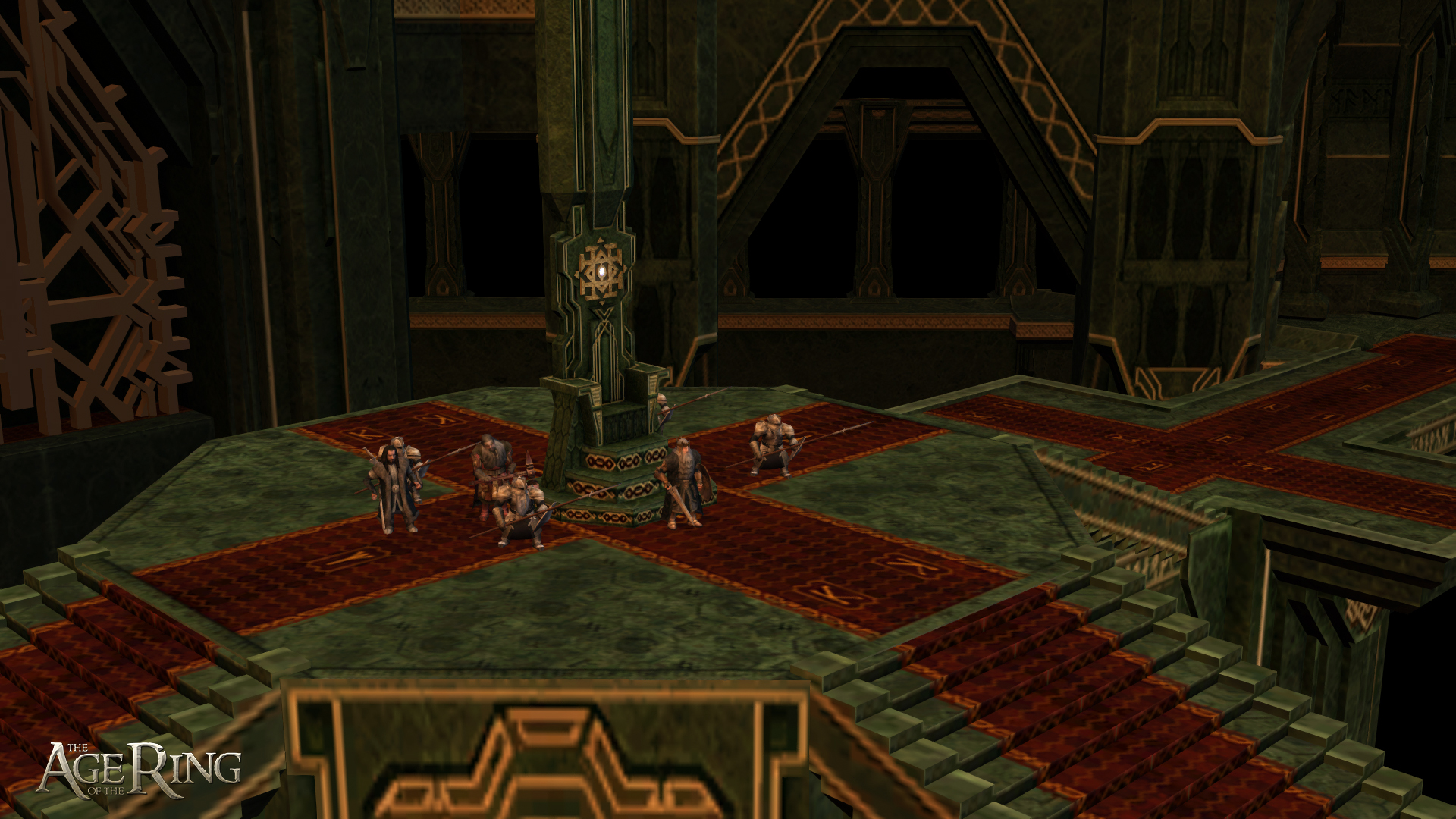 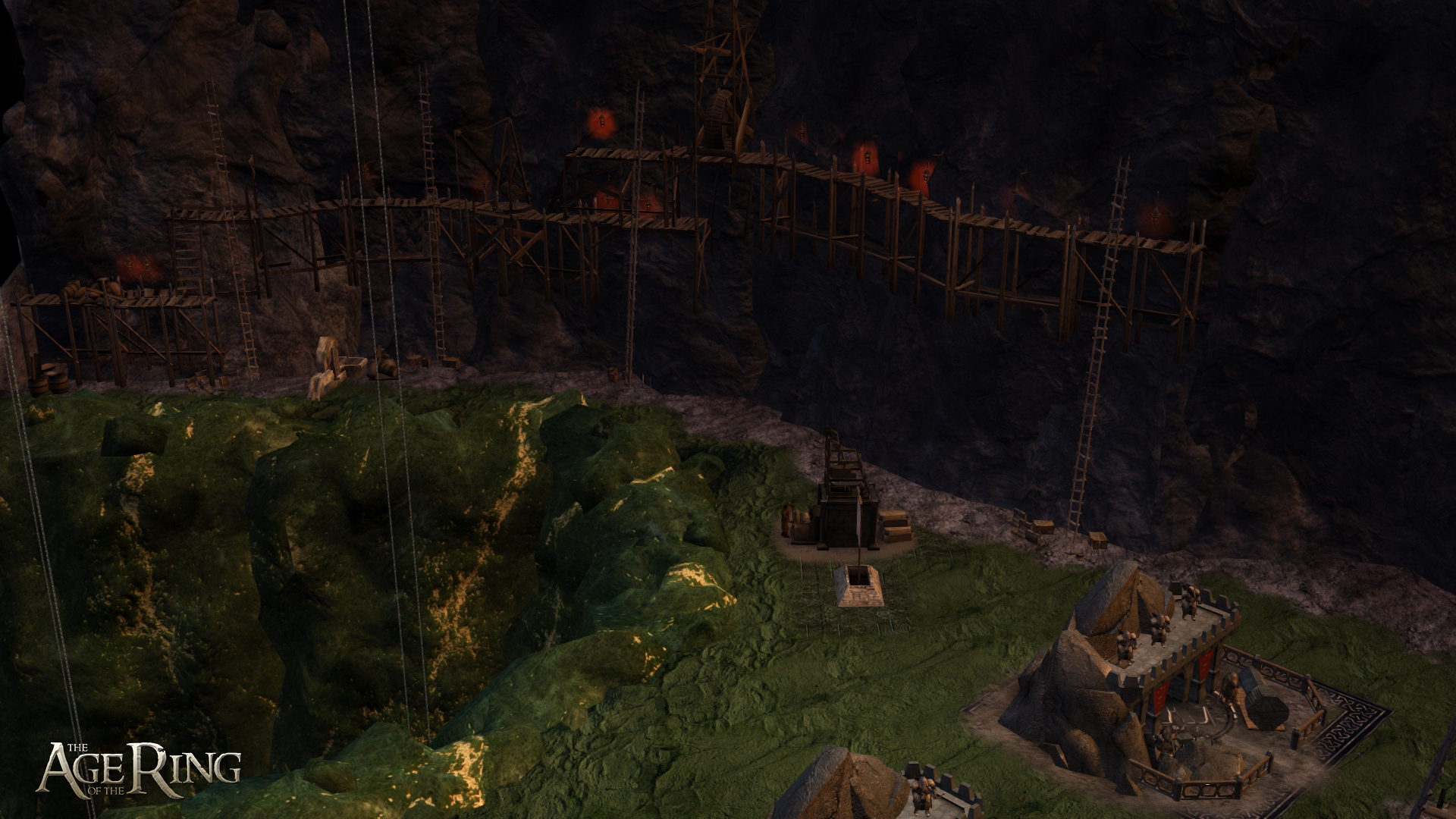 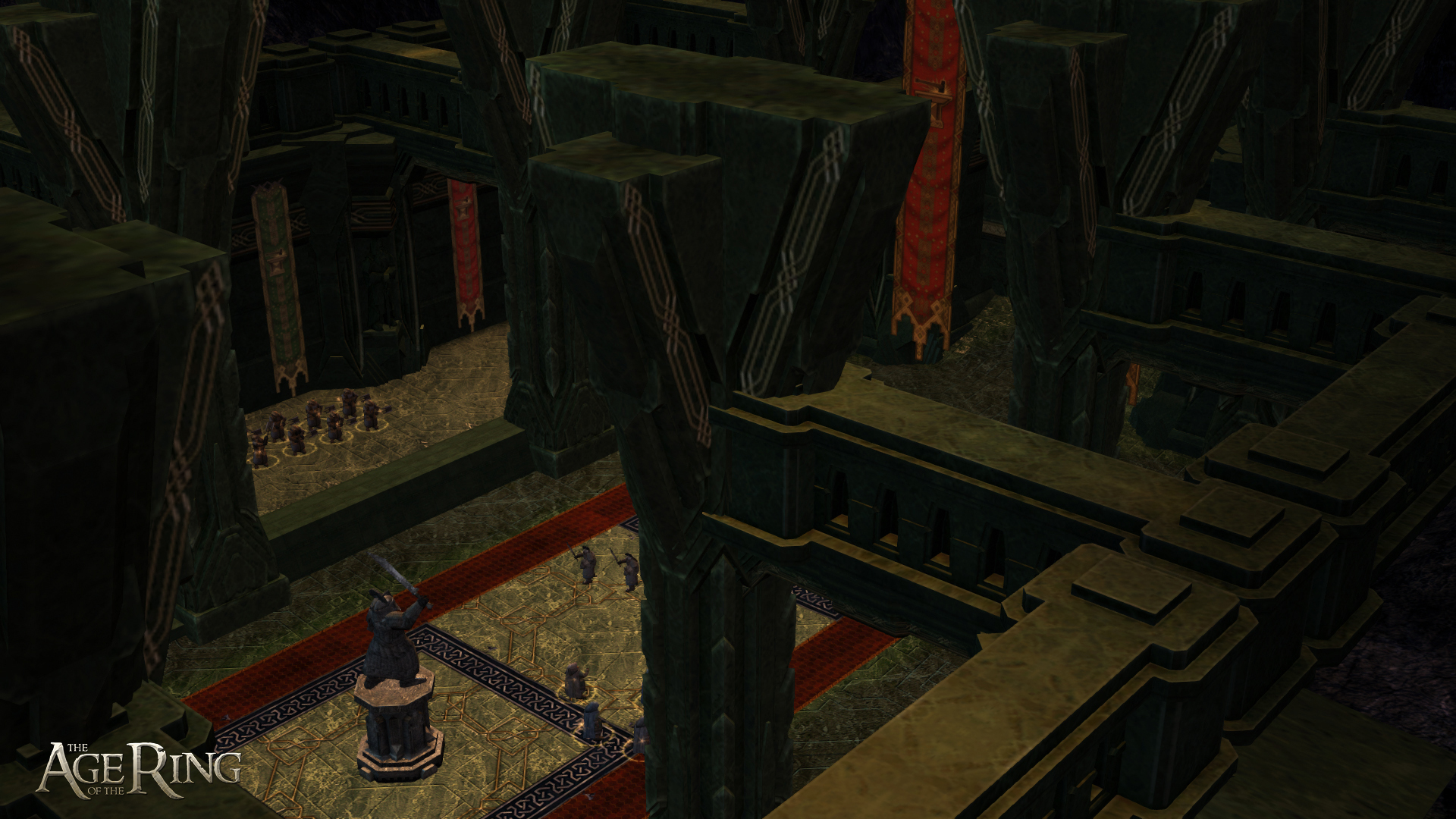 With wealth and generosity, Thror traded for elite mannish archers who settled in the merry town of Dale, a booming centre of trade and craft. Thror built high watchtowers on surrounding hills and made a lasting friendship with ravens who would bring him news. 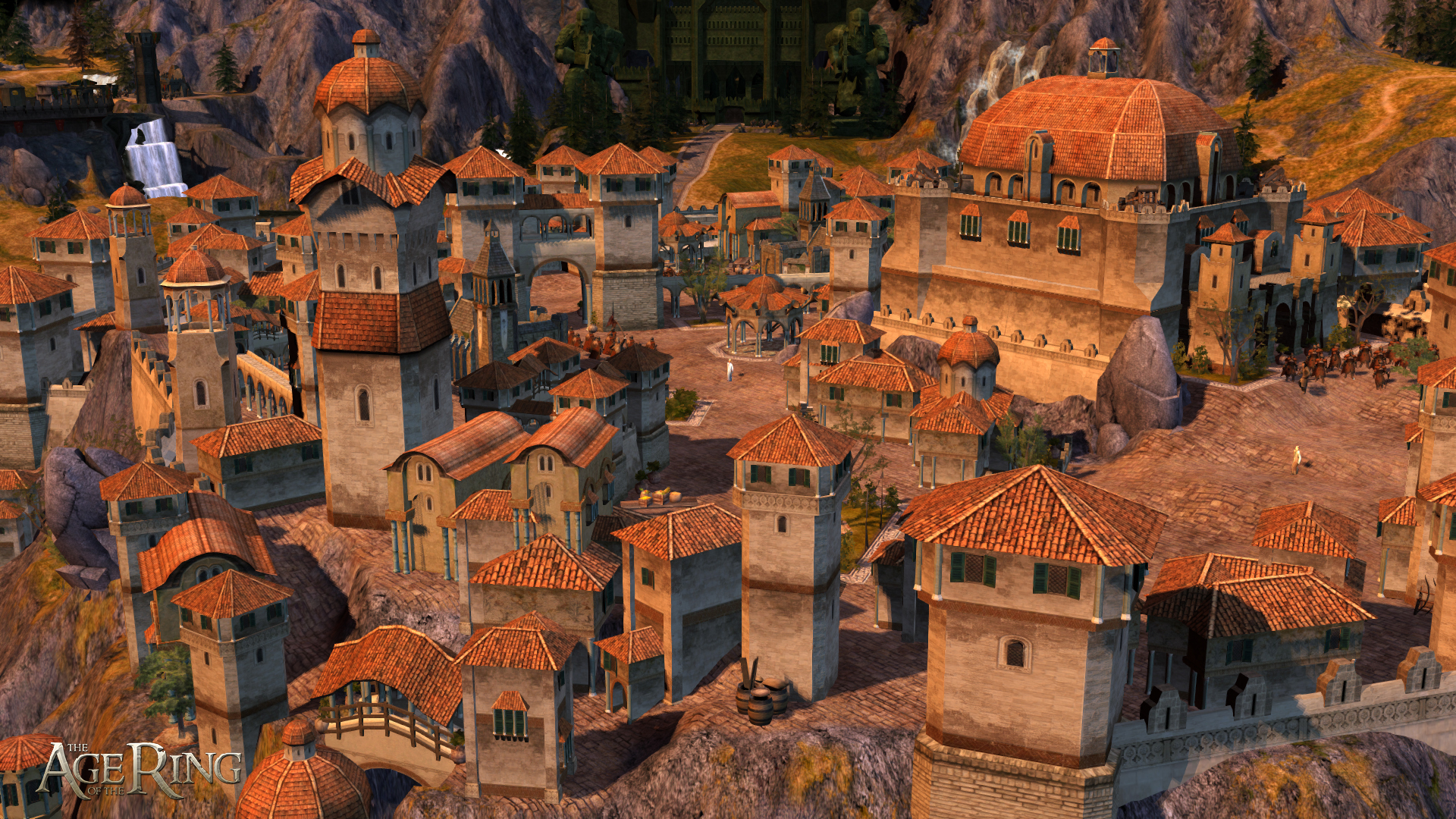 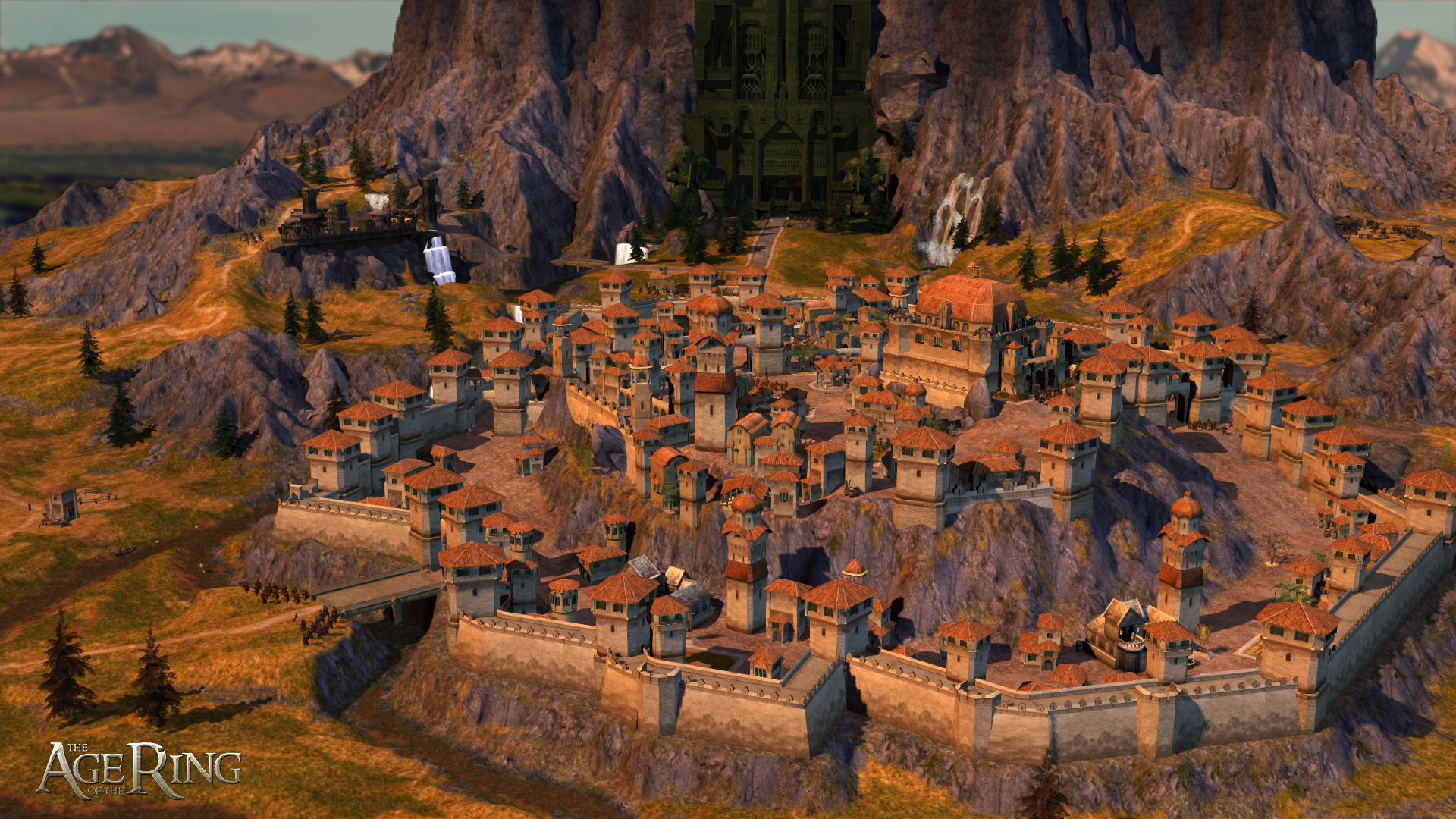 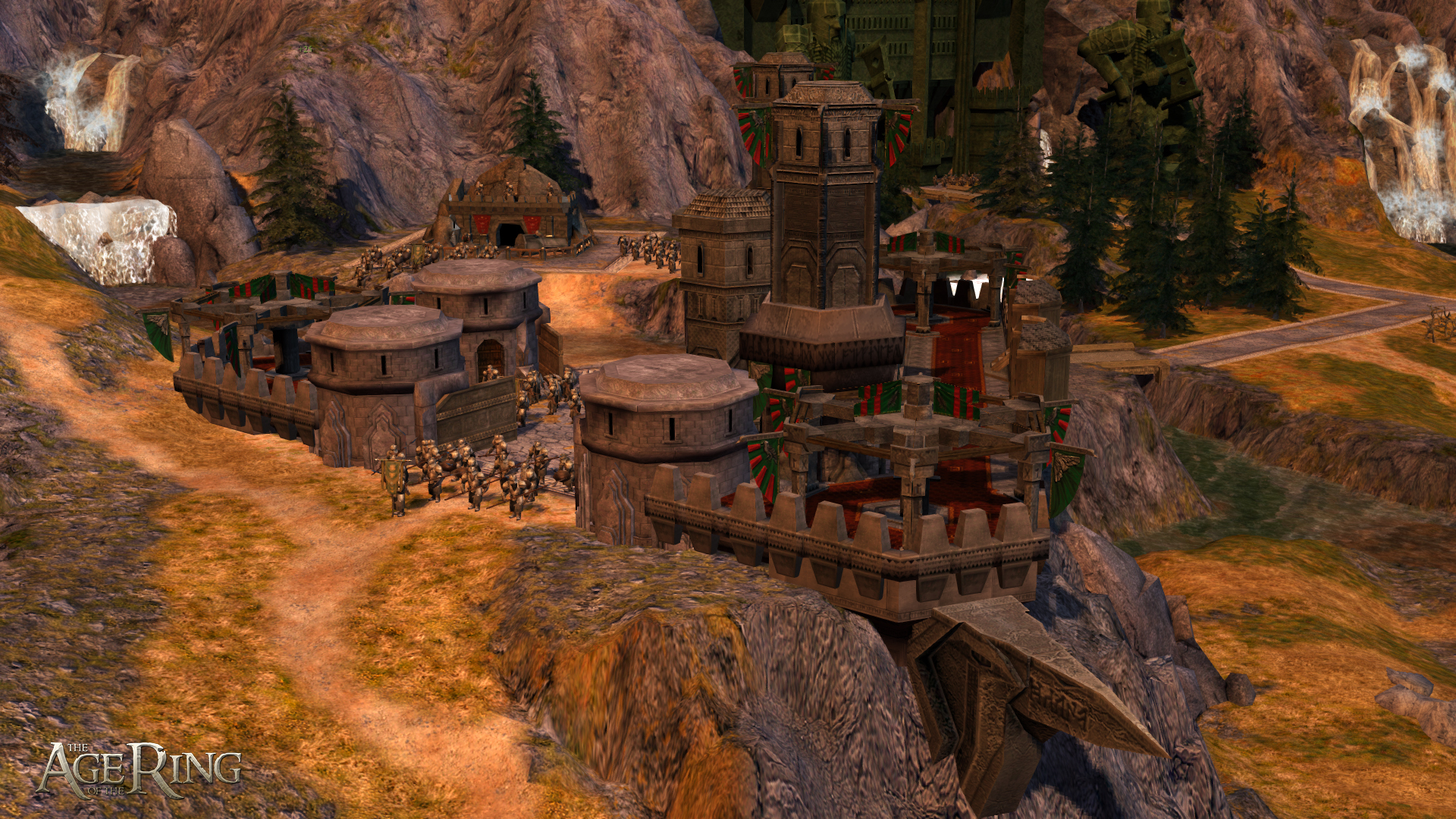 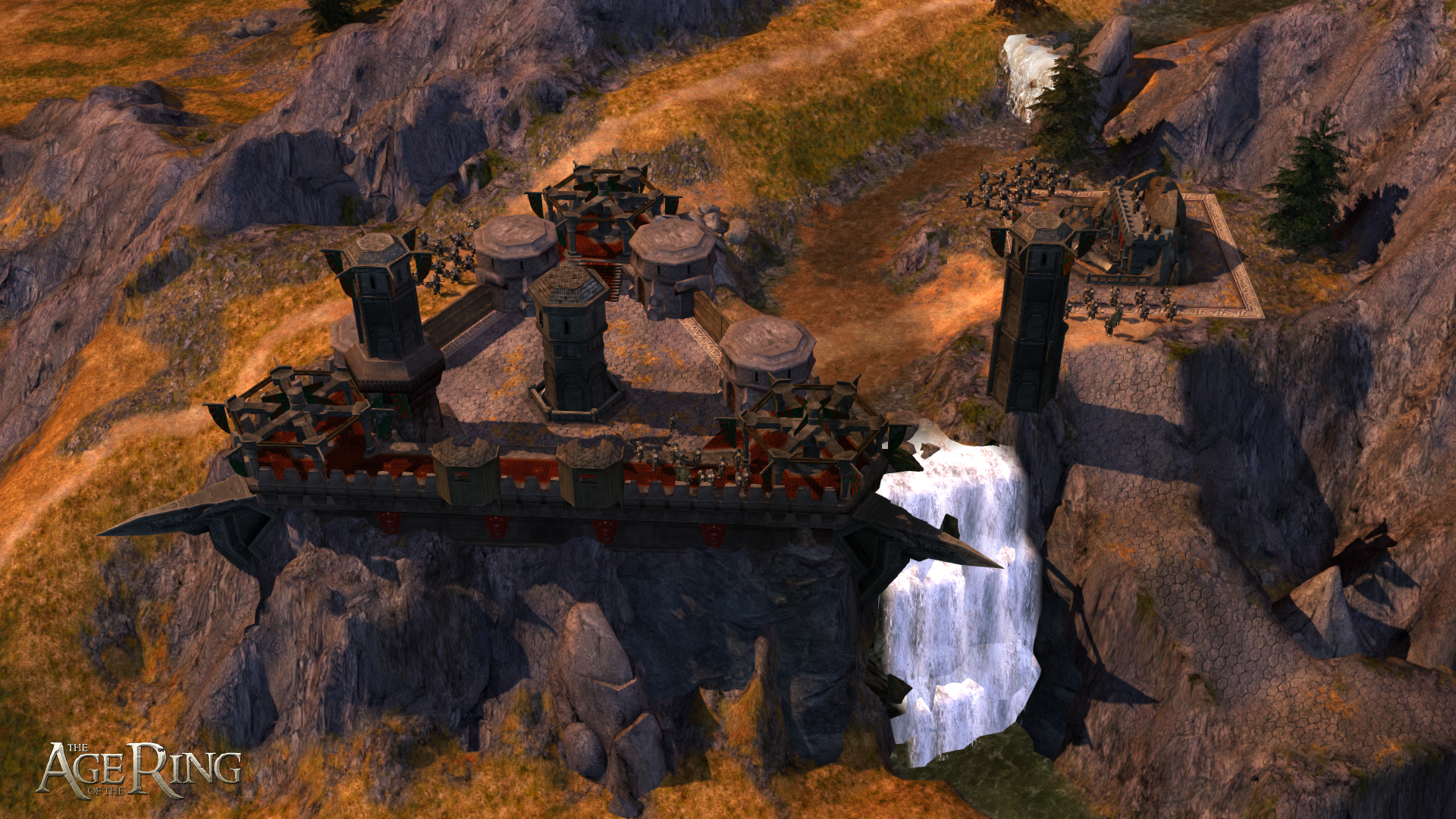 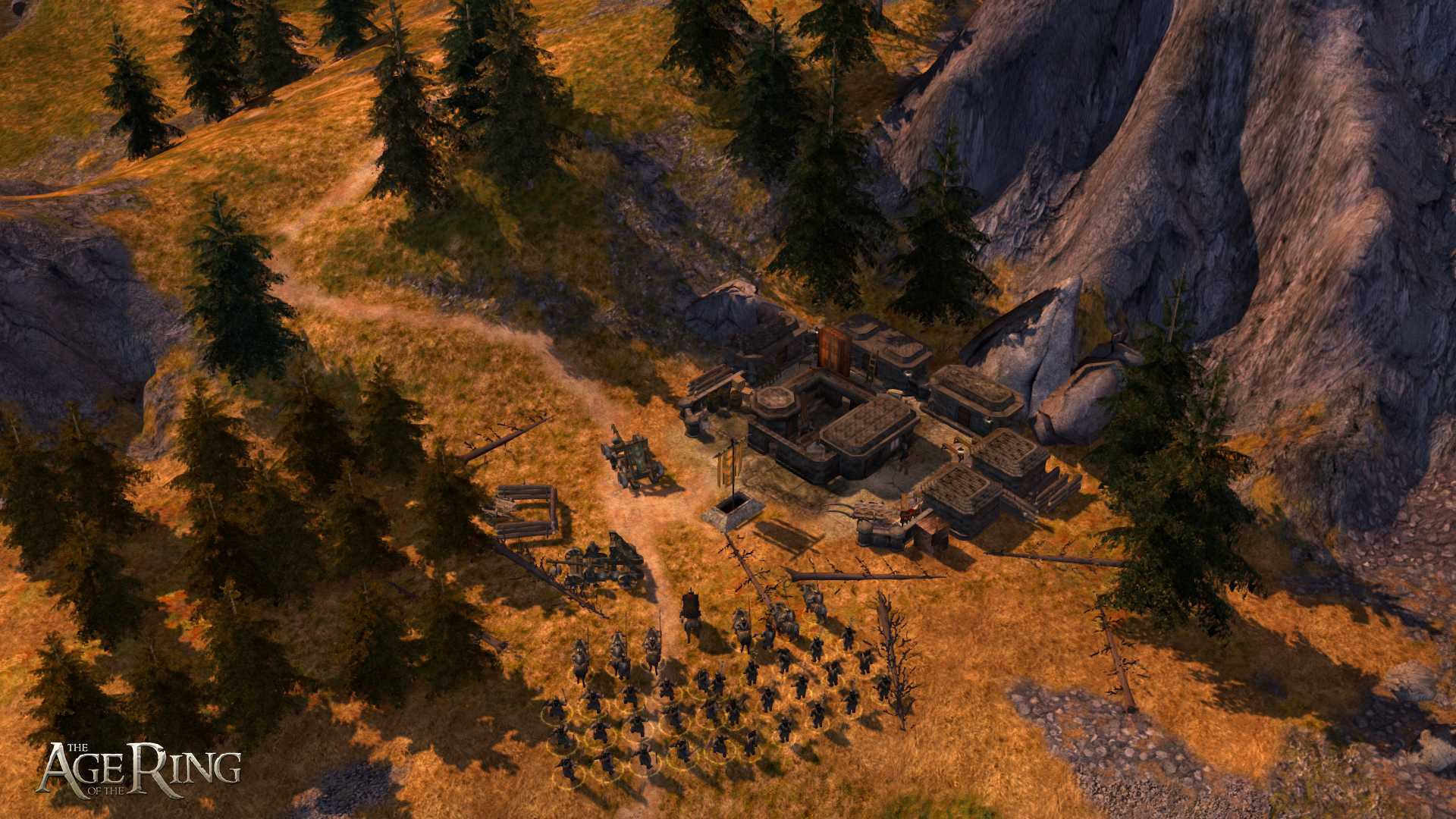 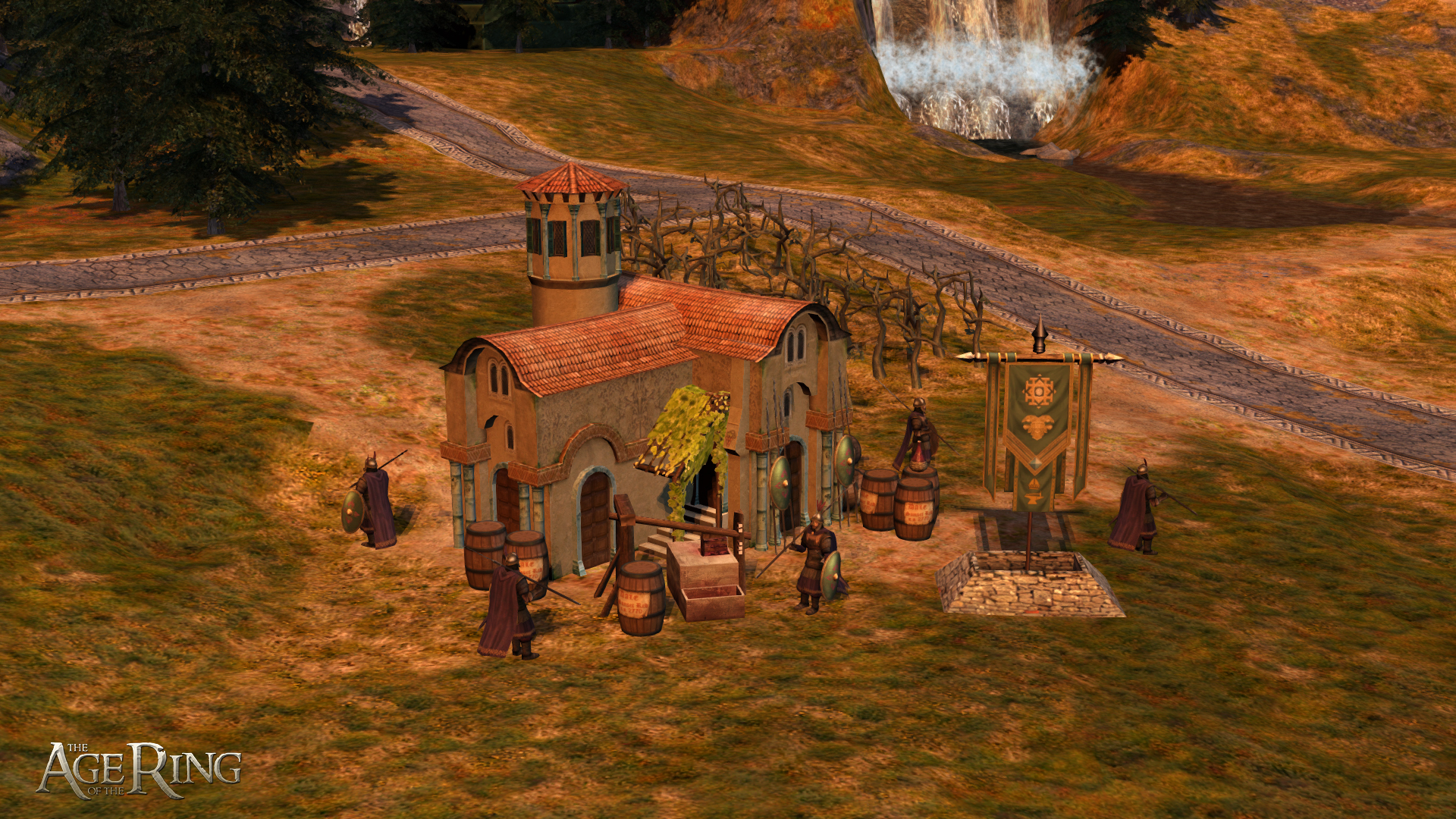 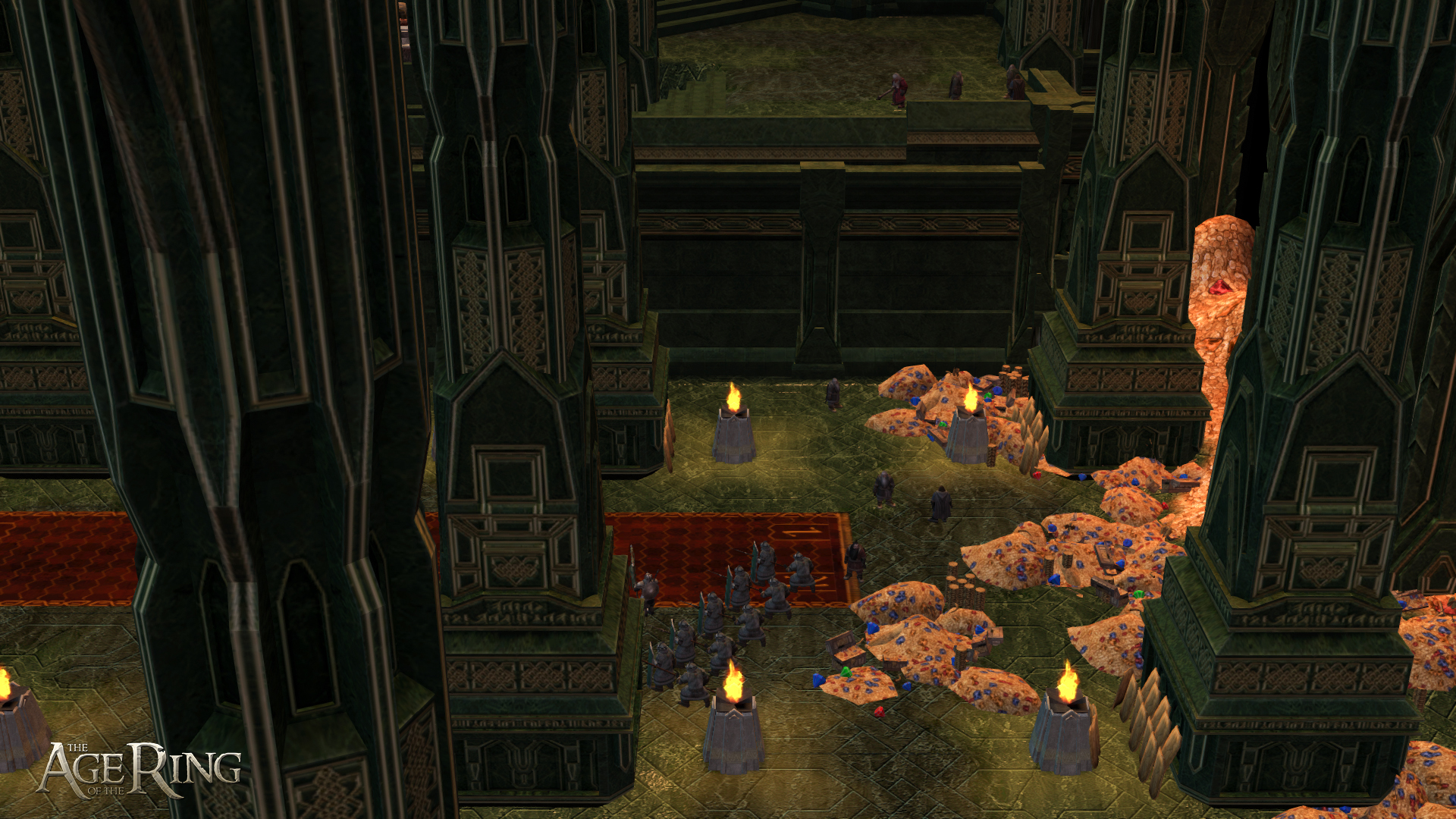 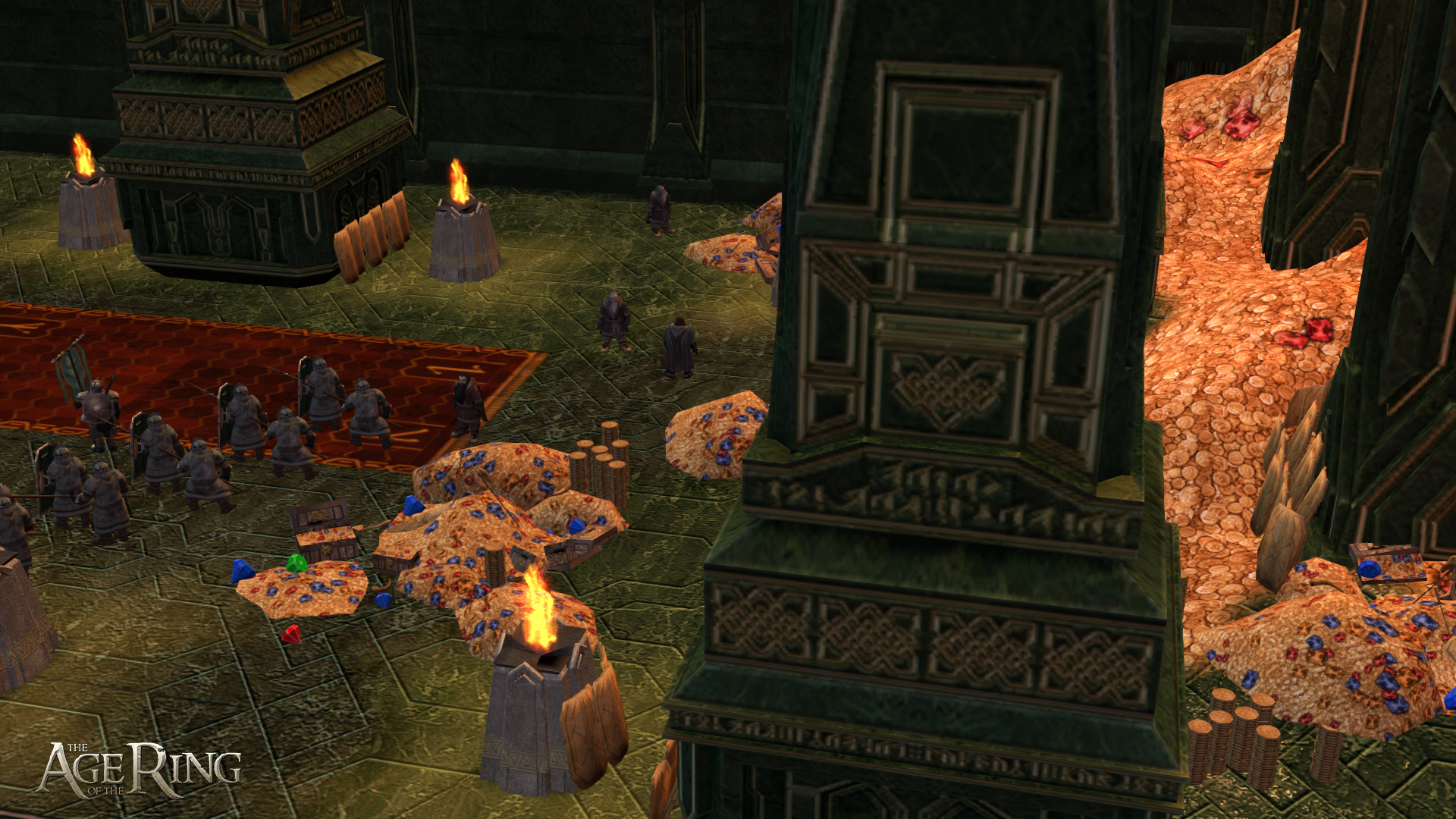 A sickness of the mind grew on Thror, becoming possessive of his hoarded gold. The tale of vast hoards of treasure undoubtedly reached the Withered Heath, where the greediest and strongest of dragons soon took flight towards Erebor.

The pines were roaring on the height,

The winds were moaning in the night. 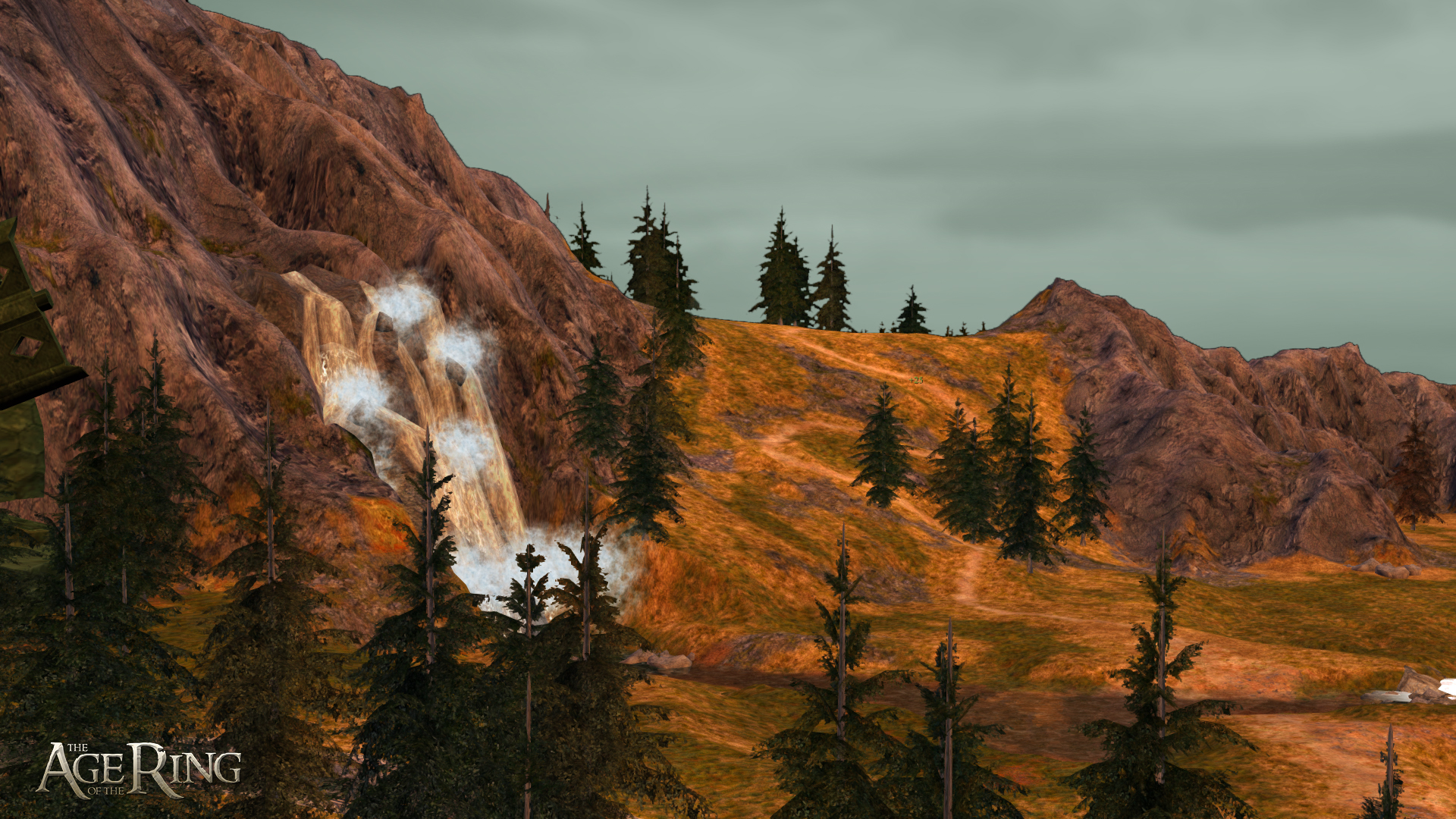 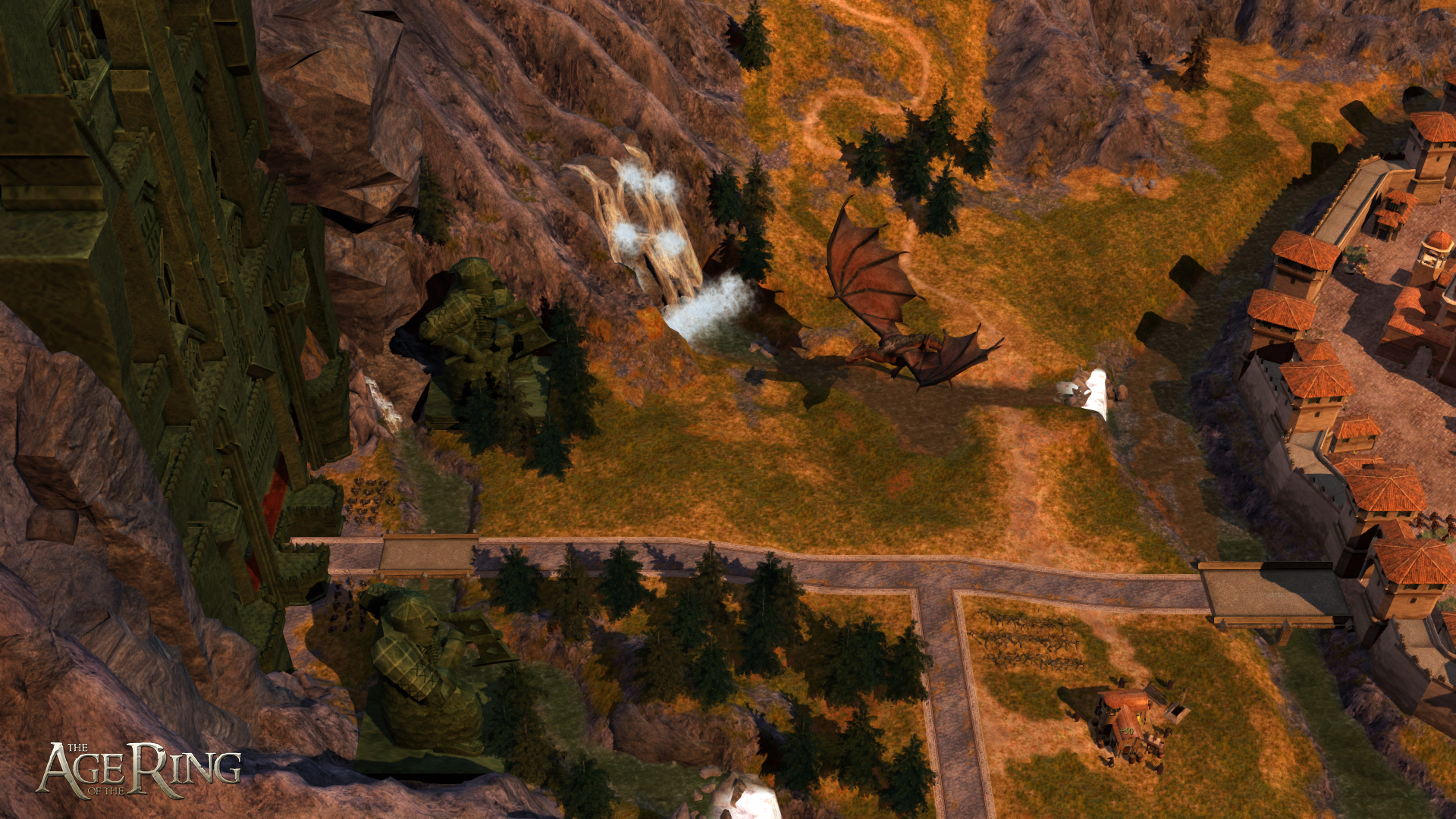 Experience Erebor, the Lonely Mountain, a new map for The Age of the Ring.

Notes on the Text

1. These outposts are to the north and east of Moria in the ranges of the Misty Mountains and the Grey Mountains.

2. In these wars the Dwarves employed the nearby Northmen, kin and ancestors of the Rohirrim to aid in protection.

Map, new Erebor 3d art and article by Matt Alexi. Erebor Gate Statues by NewErr. Dale 3d art by Mathijs. Many thanks to the rest of the AotR team for art, scripts and code.

Simply amazing Matt. Hands down the best map in bfme history. I can imagin how many houres and how much effort you have put into it. You did great!

I spent a month of Sundays on it. Literally the start of December and still going.

Wow, that's absolutely amazing. Thank you for the absolute unit of an effort you've been putting into this, for yourself and all of us!

Are you still working on the map? Keep doing, pls ^^

A monumental achievement in the BFME modding scene!

Thanks Mathijs, couldn't have done it without AotR.

OMG OMG OMG!! This is wondeful! Beautiful buildings, colours and the Throne of Erebor! Thanks for that much work!

this is super love the dwarves :D

It's really fabulous work guys! This map is kind of summary of every step you make for this incredible great mod.

Can't wait for the next update. I wish the team all the best and endurance in next challenges! ;)

I can't wait to lay siege to it, it'll look even better with the red eye painted everywhere in dwarven blood <3

We should thank your parents for your existence! :D xD
Dwarf lovers surely should!
Amazing job Matt!
P.S. Next map, Mount Gundabad before fall. :)

Sorry, the mod's name is Age of the Ring
Ps. Unless you mean Gundabad before autumn. That would be possible.

I've told this to my parents and there were bemused and confused.

I'm still working on Erebor, and once it's finished I've got several more projects. ;)

What are the dimensions of the map

I see, that makes sense. How many players are there?

There are three players, with the option of more when the map is included in WotR mode and the campaign in the future.

This is like a Total War map. Amazing work!

You can tell when I mod is done with passion. Splendid job on this guys!

applause to work. a lot of effort, very beautiful.

That looks beautiful!!!
I cant find the right words to say a great that looks like!!!
Great work!!
I hope we can play it soon.

It's a dream come true...
The map looks astonishing !

Thanks a lot for this masterpiece !

I wonder if someone will make a winter version with the city in ruins...

Campaign variations are planned but they won't be seen for a while.

The only thing I see in this map is love, love,
a lot of love for The Lord of the Rings, Thanks AOTR TEAM ;)

Very well done Matt and incredibly accurate and down to detail on the map itself and props. This is a new step up for BFME!

What a beauty is this ?

uh-huh. So will the Dorwinion units be better than base units (i.e. Lamedon Men) or will they be more similar to the more elite units (i.e. Anorien units)

Special thanks to Ulo for post-publication fixes to the text, and a fantastic chat about grammar! =D

the only thing I see, maybe to improve, is the road to raven hills.
a little simple
greetings very good job

You are right, I keep on looking at it and thinking the same. When Ravenhill was first planned I had staircase objects as the ramp, but these were very glitchy, so I've settled for something that works better. But I'm still considering creative ways to make it look better. Thanks for the improvement suggestion Dennisl. ;)

One quick question, out of sheer curiosity. Do you plan on updating all of the city maps like this? And do you plan on making the AI able to play on this maps in the way that makes sense? I mean, Minas Tirith, Helm's Deep, etc.
Not that I'm expecting because it's probably pretty hard to do, so... yeah. No offense here or something.

We'd like to create more fortress maps, they do take a long time.

The AI attacks the Erebor fortress, you may want to try it on Brutal. I haven't started testing if they can occupy the base and build structures, I doubt that will be in the next release.

Oh sure, I'm more concerned about AI attacking than defending, don't really care about the second one. I know they take so I'm not like pushing, just, like I said, curious for your plans. Well then, wish you all good, you are doing a great mod, both visually and gameplay wise. <3

Personally, I cannot defeat them while testing the map on Medium difficulty.

When will this map be available?

Hey Guys sorry to Bother you, But I've been trying to run this Map for a bit and for some reason or another it keeps on crashing. I even uninstalled the Age of the Ring mod and Reinstalled but after so long into a match it suddenly crashes claiming a bunch of errors one of them being memory. not sure what the problem is as I havent had any issue until this map. though i recently tried installing Edain to try out as well with no success prior to my issue, do to mounting issues which i;m sure i could fix but seemed like a big hassle. I fully uninstalled the Edain mod and disabled it before hand. So I don't think that's the issue. double checked everthing as far as patches making sure the right ones were selected, and like I said the rest of the game seems to work fine. just not this Awesome map. i really want to play it as it is beautiful and I know it takes a lot of work to make something so. please help me solve my crashing issue, if you know what might be causing it or have had any similar problems yourself. Thank you in advance.