For today's update we would like to focus on "Tram", one of several maps currently in development. This full sized NS2 map will ship with the Alpha, so those players who have pre-ordered the game will soon will be roaming its atmospheric hallways and fighting intense battles in its beautifully detailed areas.

For today's update we would like to focus on "Tram", one of several maps currently in development. This full sized NS2 map will ship with the Alpha, so those players who have pre-ordered the game will soon will be roaming its atmospheric hallways and fighting intense battles in its beautifully detailed areas. 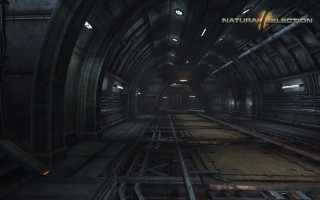 The history of development on the Tram map has not always been smooth. As the first NS2 map, it was begun long before the Editor Tools were done and before the majority of environment assets had been created. The map's core theme of a large tram tunnel running like a spine though the map, connecting the starting bases, has remained the same, but due to changes in the engine, tools, game design, and even mappers, most of the early work on it had to be scrapped.

We decided to shift focus to some smaller, faster deathmatch style maps (Range 1 and 2), that we could use for testing purposes and left Tram to sit for a bit. Then, impressed by the work we'd seen being done with the editor tools on the forums by Michael "Olmy" Schouten, we invited him to join the team to put his talents to use on the Tram map. In January of this year the map was rebooted from scratch, and in Michael's capable hands it has rapidly become a visually impressive NS2 map that we feel will showcase NS2 gameplay at its best.

The use of the tram tunnel as a design theme not only provides a unique visual distinction for this map, but also serves as a primary route that allows players to easily navigate from one start base to the other, with most of the important areas accessible directly off of the tunnel. We are putting a lot of effort into making maps in NS2 user friendly, not by eliminating complexity, but rather dividing them up into large and memorable landmark themed rooms with obvious primary connecting routes. This will allow new players to be able to jump into a game and not get frustrated by getting lost in a maze of similar looking hallways, and yet still allows players to discover and learn all of the secondary routes on repeat playing.

In developing the map we started with a very high level 2D layout, to establish a general flow, and the number of key resource and tech points we wanted to have on this map. 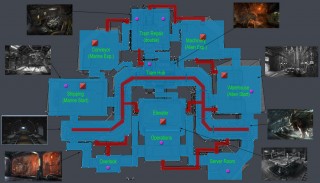 Each of the internal maps in development are meant to represent a different section or level of a single giant mining and refining facility, with corresponding room/area themes. As can be seen in the layout names, Tram is meant to be the part of the facility in charge of packing, storing, and shipping.

Once the layout was finalized, we moved into whats called the greybox phase, where the entire map is quickly blocked out in 3D in the level editor, with no textures or props. Further changes to the layout are made at this stage, and can be done quickly due to the simplicity of the map construction. Then, in stages, textures and props and basic lighting are added, refinements are made as necessary, and with each pass the map gets more and more polished. It is a lot of work, and never really finished, so it's likely the tram map will continue to be tweaked and polished right up until NS2 is released (and even after!). 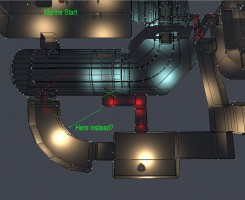 Concept art is key to establishing a visual identity and look for a map, and is used by the environment artists to create textures and props. It also helps to jump start ideas for the mapper, and even quick rough sketches such as this one can be enough for a skilled mapper to translate into a fully realized room. 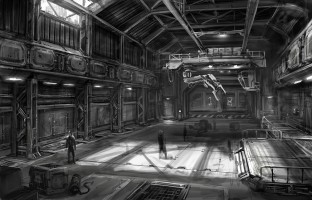 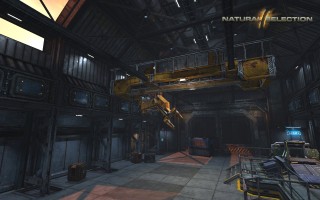 As you can see, in some cases the translation from concept to in game can be almost identical, as with with the Alien Start cargo storage room. 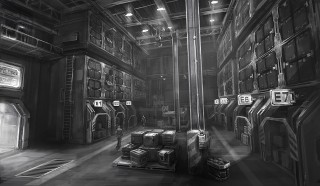 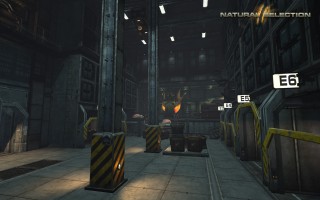 In other cases, such as with this tram repair room area below, the final version can diverge from the concept quite a bit. The concept was instrumental in developing a theme, and used to create many of the props necessary to flesh out the area, but when the room was first built to match, the repair pit area became problematic from a visual and gameplay stand point. It was reworked a few times, and Michael added some distinct visual flourishes such as the angled pillars which really help to contain the focus on the landmark props, and added a nice detailed architectural element to the room. 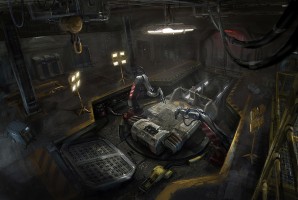 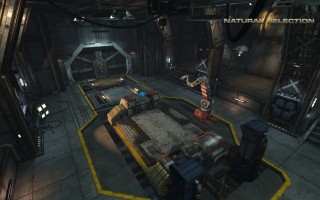 We hope you've enjoyed this sneak peek at the Tram map, as well as the behind the scenes look into the map making process. 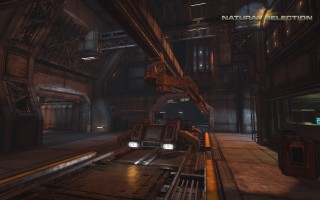 I rather liked this news article. I would like to see more articles about the level design process in the future. The tram map looks like it'll be a classic NS2 map that will be played often.

Loving how the before/after is, and loving that its all gonna be one map. Amazing.

Superb atmosphere.
All in one map, awesome!

That's so great!
It's going to be so awesome playing NS2!

Looks good. The overall Design of this game is more refined than that of some AAA titles. Nothing too original visually (in environments), but there is enough originality in the gameplay.

I'm a little bit concerned, because last time (2 weeks ago) I ran the game, I had some sound (loop) glitches, the wooden targets didn't load and the engine still stutters and feels somehow fragile to me, as if I could put a fist through every wall.

I hope a lot of things get optimized, because Natural Selection 2 draws more resources at the moment than e.g. Just Cause 2 does. Looking forward to the Alpha, though! I hope I'll be playing this map.

i want the alpha released so bad =(

>This full sized NS2 map will ship with the Alpha, so those players who have pre-ordered the game will soon will be roaming its atmospheric hallways and fighting intense battles in its beautifully detailed areas.

is this hinting at the alpha being soon?

Looking really great guys, cant wait!
I have one question though, I apologize if you have already answered this earlier but will there be bots you can play against while offline or when laning with friends? Regardless, NS2 will be badass to play anyway!