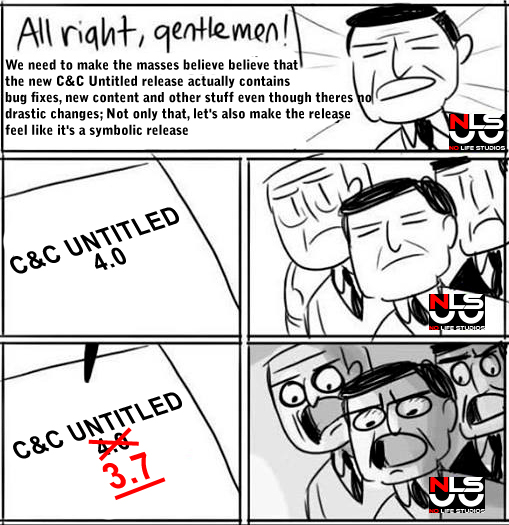 art (c) to hiimdaisy modified for ccu use

Alright, kidding aside, let's get serious:

First off, happy 2017 to all our loyal fans that had been patiently following us throughout the years and second, we have an announcement to you all so listen up; As you've all known, C&C Untitled is now, more or less, being developed for over 11 years and throughout the years, long gone are the simple years and these past few years, the dev team's lives is now getting hit by the reality of real-life, shifting interests and other boring adult issues which pretty much translates to having a lot less time or motivation for our hobbies, in this case, developing C&C Untitled.

Not only that, it doesn't help either that we've been having manpower issues as well, especially in regards to scripting a working AI and proper multiplayer testing and so, we'll going to be direct to admit that the AI performance in this version is extremely if not downright lackluster (and might not even work) at best and gameplay balance might have some oddities here and there and not as refined like the previous versions.

So what does this mean? Simple, this 2017 release would mean the very very, very LAST big release for C&C Untitled; Infact, this release was supposed to be 'version 4.0' that we've been hinting for over a year already, but with shifting interests and real-life issues catching up, we've decided to release it as-is while it's still at the internal version of 'V3.7' instead of dragging the development even further;

So, ladies, gents, animu weebs, filthy furries and other minorities, as promised

we present this to all of you, the release of C&C Untitled v3.7: 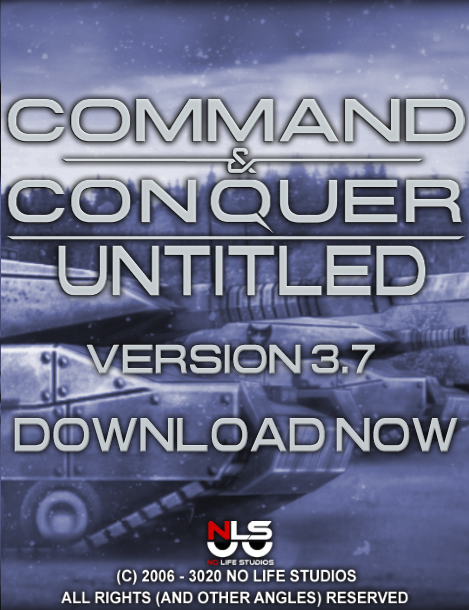 HOW TO INSTALL:
Just extract the content of this rar file in a clean ZH directory and you're good to go.
Uninstalling the mod is just the reverse of this procedure.

ADDITIONAL NOTES:
Considering this is pretty much the final release, this version will be provided as-is and no further direct active support will be done; however, since the development might still continue behind the scenes, we will still be accepting bug reports; So, if you have any bugs, issues or whatever, feel free to go to the following links:

Also, do make sure that, before installing the mod, your copy of Zerohour is properly installed and is patched to version 1.4. Not only that, since this mod has a severely broken AI system, we highly recommend it playing with your friends via either C&C Online or GameRanger.

CLOSING MESSAGE:
That being said - thank you for all your support during our many years of ups and downs in modding and don't worry, the development of C&C Untitled might still continue in the back end of things and throughout, we might still release patches here and there; but overall, this marks the end of C&C Untitled doing big full version releases like we used to do.

just go to the following links:

Also not forgetting the major shoutouts as well to the following due to their contribution to this release:
Sato-kun of Condition Zero mod
Stalker of Operation:Firestorm mod
GDIZOCOM of Project: Tomahawk storm mod
...and the rest of the NLS and SWR crew.

Also, thank you for voting and even make us reach the top 100 in last-year's MOTY 2016, it means alot us and thank you for enjoying our work. Overall, hope you all understand and have a happy new year to you all.
-NLS Team Signing out

We wish you the best on future endeavors

Thanks for the C&C EA never gave us

Thank you for this mod, for your dedication, and for the time you spent on it.
Best wishes for your future projects, being modding or anything that you'll be into.

Dear,NLS, I have a guy who can gladly help you with an AI, his name is Mizo_ROTR and he did hell of a job with an AI for ROTR mod (it really kicks ***!).
I've contacted him and he needs your permission + exact specs of what he needs to do.

We know who Mizo is, and while we appreciate the thought, in the future, please do not ask other people for favors on our behalf. If we need their help, we will ask them ourselves.

oh man, I'm so sorry , yeah
My bad, just want this mod to become one of the best (to my mind it is already, on par with ROTR), but it needs a little tweak, exactly an AI and Mizo is a solution,at least he can provide a pretty good opponent.
Maybe you can still contact him?
He awaits your agreement and then he can help you with an AI (needed to ask you or any stuff member first, but I was so happy and then kinda upset cuz AI is braindead and then I thought about Mizo and his work on ROTR).

Honestly, I don't see a reason as to why you'd refuse a generous offer of free will, all you guys would have to do is just repackage the whole mod with the new AI that Mizo would create and re-upload it. But I'm sure you already know that, just saying. :)

That may be true if Mizo himself was the one who posted here, but he wasn't.

The thing is, as I've said earlier, we know Mizo, and I personally have chatted with him multiple times, and that's why I know he's currently very busy with ROTR and probably won't be available to work for other mods for a while.

It's nice to see our fans thinking of ways to help us, but we've thinking about how to solve our problems for a much longer time, and know a lot more about it than you, so just leave it to us.

Hm, I'll track this mod and await further news on AI. Unfortortunetly I was never one for PvP (Not saying your mod suck, that'd be stupid).

As soon as I don't have so much on my plate, I'll provide something.

Oh of course, I completely understand that modders have lives and do what they feel they should/want to. It's a badass mod, keep up the awesome work!

So, this means that there will be no updates for C&C untitled? or will you guys continue once those real life issues are a bit solved?

Is there a way to play a mission with the mod installed?

Hello Creator of this Mod,
How to run this game coz everything start with !CCU? Does it come with .bat or any exe file to run?

Just extract the files to your main ZH folder, then start the game as normal.

Remember to back up your ZH folder just in case. Also, you can't install multiple mods in the same folder.