After releasing AotR 3.0 (and 3.1) in the summer of 2018, the team set out to deliver the next faction: Rivendell, along with a reworked War of the Ring mode. The intention was to release it about 6 months later, in early 2019. That didn't happen: our team had begun to grow, and so did our ambitions.

But then part of the team went rogue and started hammering out Rohan, which before long reached a level of completion that surpassed what we'd managed to do for Rivendell. So the decision was made to release two factions, a little later than Rivendell was planned to be released.

Then our man Fudge kicked our campaign into gear, and seeing what he was producing, we decided to invest as much time and effort as we could into it. Testing of 4.0 started in February of 2019, and continued into hours before the release on August 10th.

In the end, AotR 4.0 became much bigger than we had anticipated, and we'd like to thank everyone involved in the process for their time and dedication. The development team, the testers, the voice actors. It was a blast to work together with you all and deliver the biggest release of our project yet.

And thank you to all of our fans and players! Your feedback has been massively positive and encouraging!

We have been hard at work at developing patch 4.1, which will be out very soon. Patch 4.1 contains a looong list of bug fixes and balance changes, as well as a number of new maps! 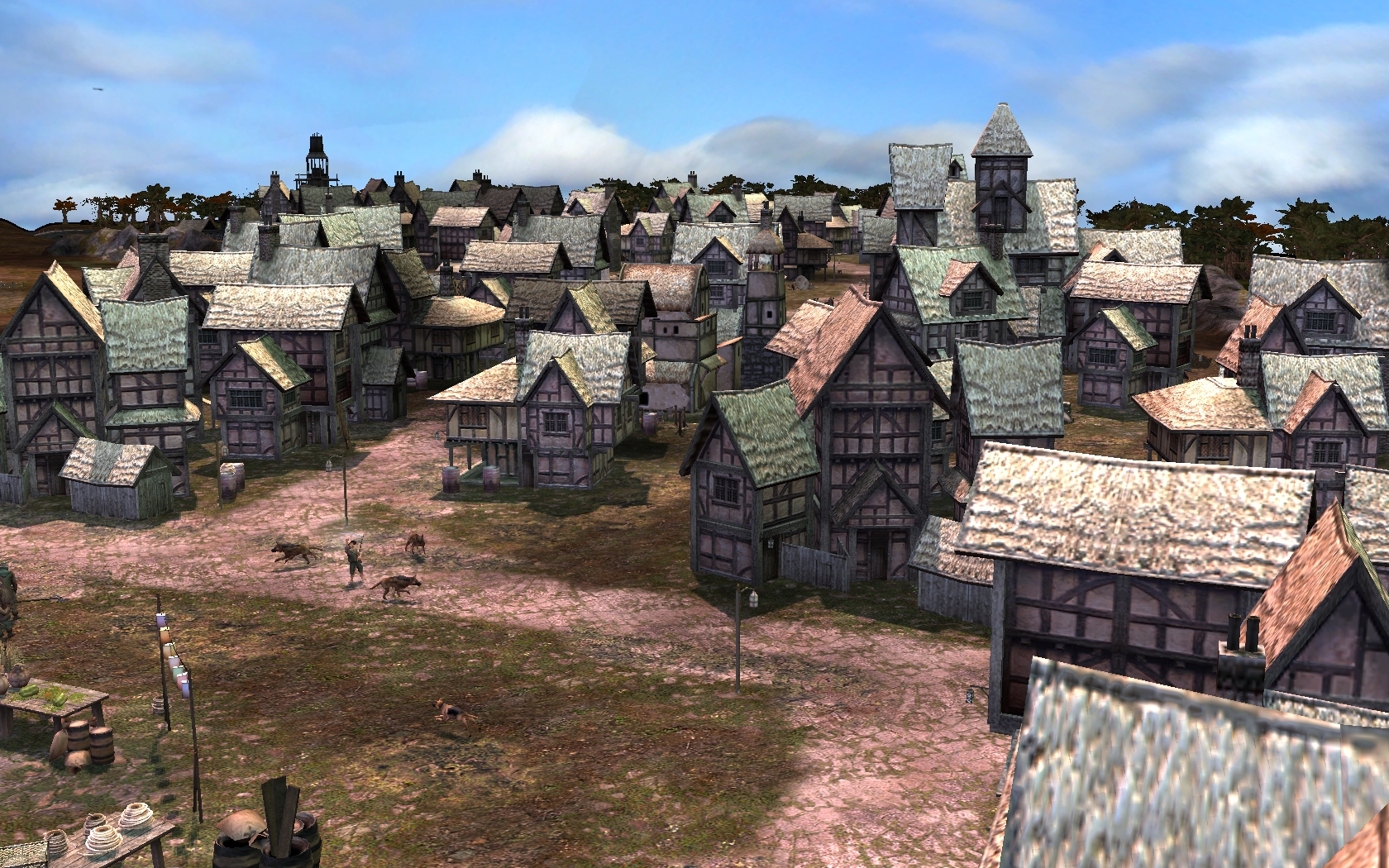 Archet, a small town in Bree-land, by Fjodor

Dunfearn, a quaint area in Dunland, by Fudge

Red Desert of Khand, by MattTheLegoman 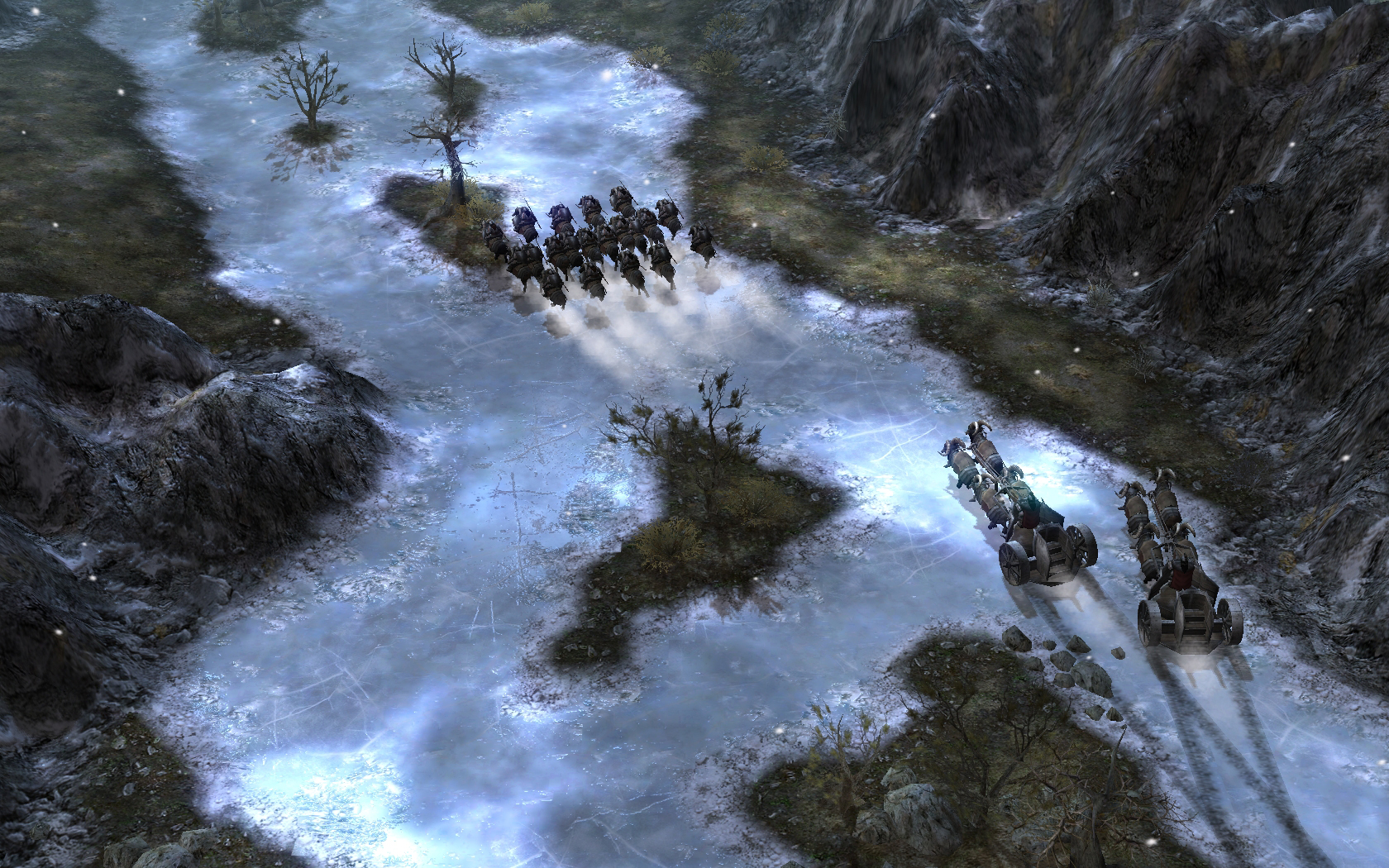 We're working on 4.1's final touches right now. Expect a release before the end of the year.

What's next after that?

Glad you asked. Ever since we released 3.1, a dark and terrible power has been slowly settling into its malicious shape... Dol Guldur is going to be our next evil faction, with unique decay and undeath mechanics that have not been seen before in Battle for Middle-earth. 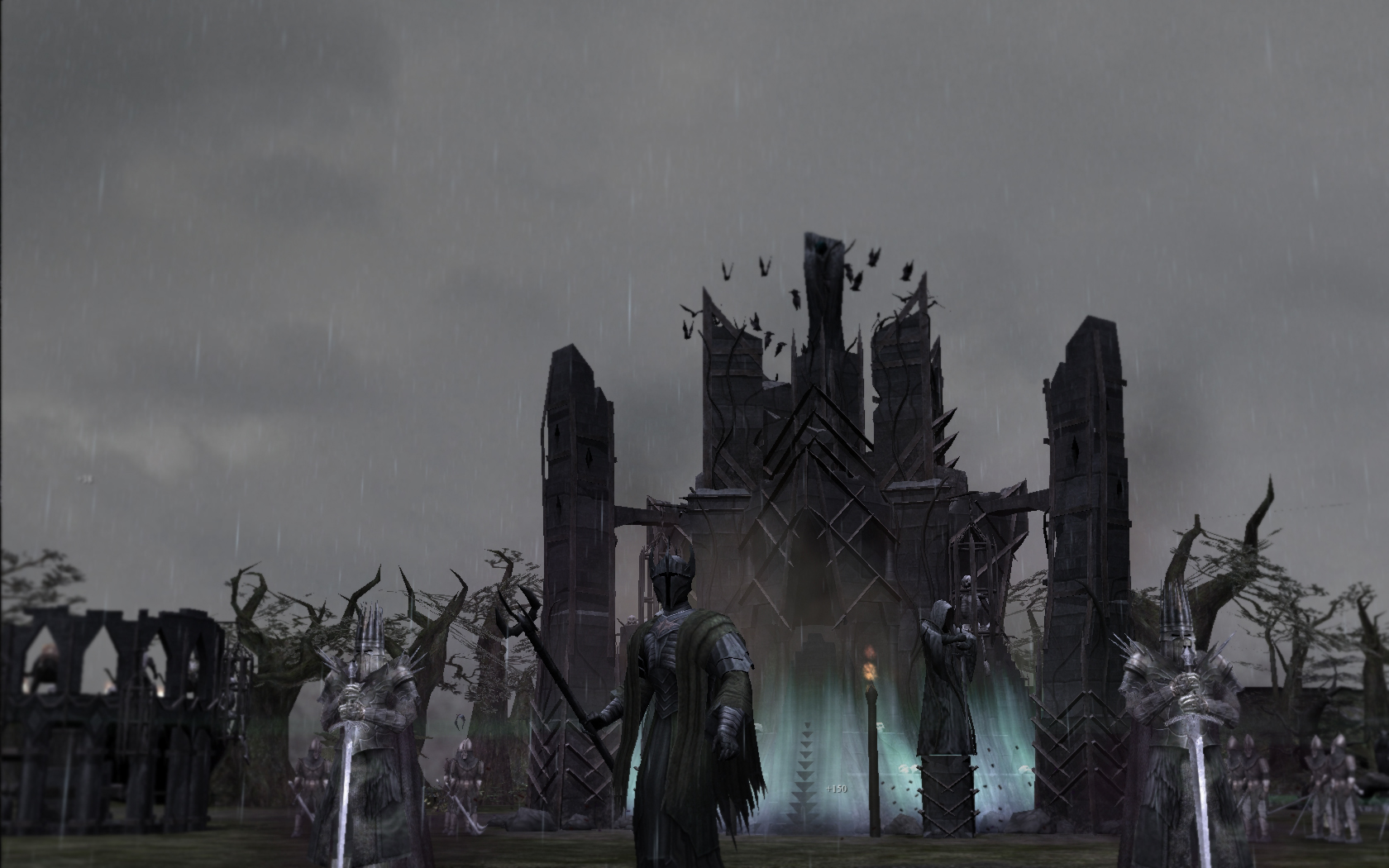 Dol Guldur is designed as a forward-base-spam faction, with cheap, one-use builders (Shades) that can be recruited from the fortress as well as Dol Guldur's Ruinous Towers - cheap, quickly built forward towers that counteract Slow Decay, the damage-over-time effect that Dol Guldur's living units suffer from. 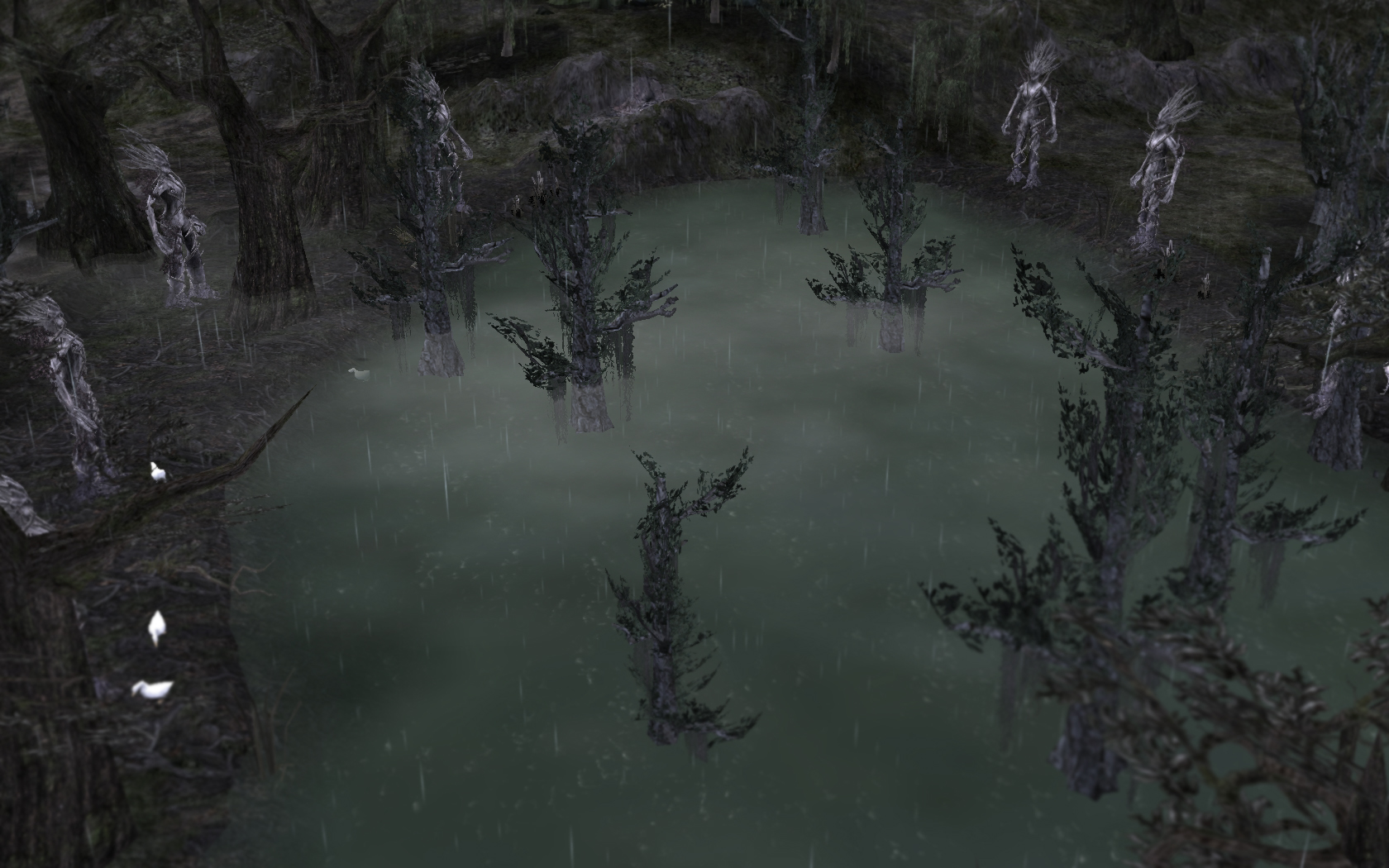 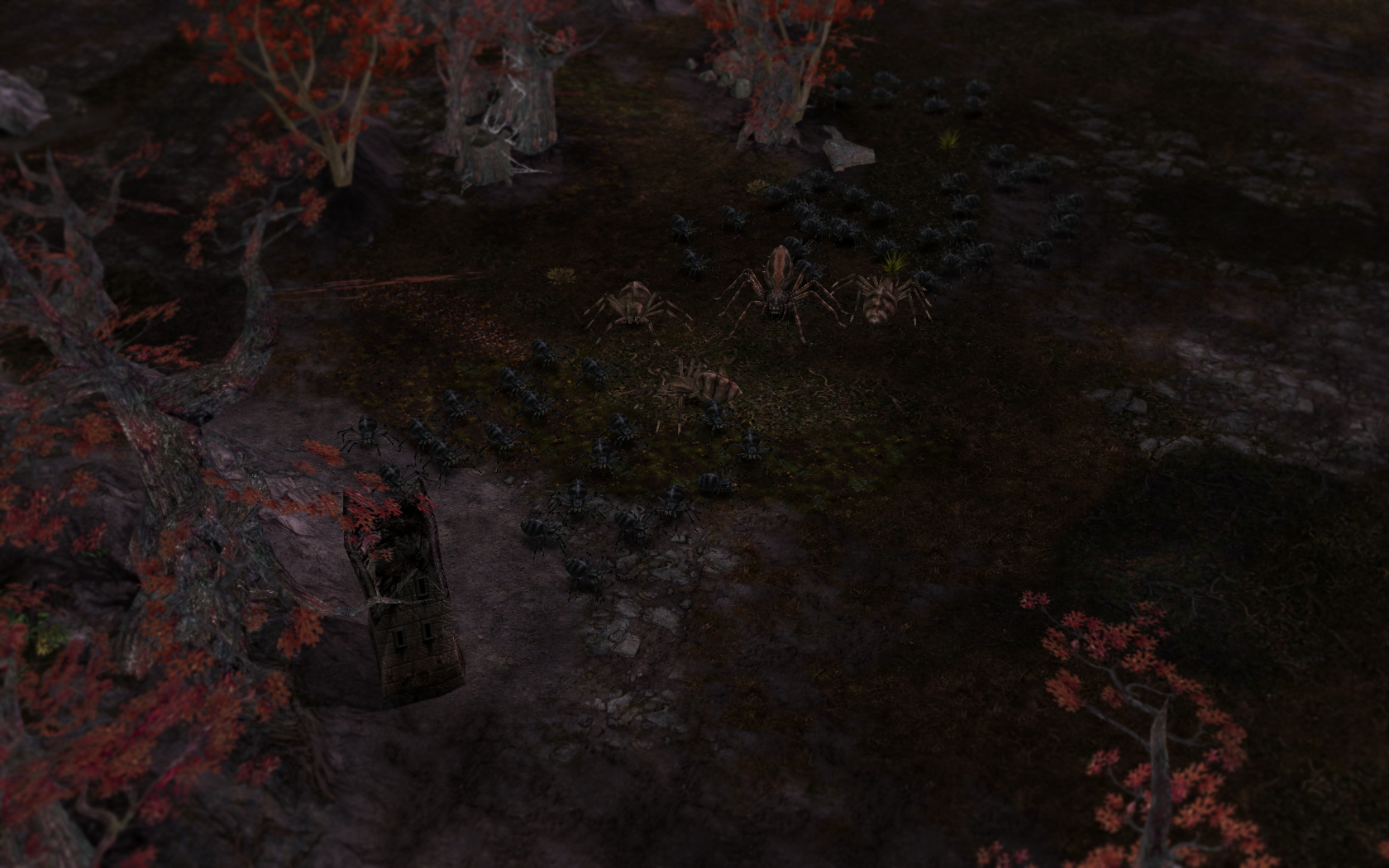 Dol Guldur possesses various means to corrupt and bring back both enemy and friendly units as ravenous undead. These Risen Dead are similar in power to other factions' elites (Uruk-hai, Anórien Soldiers), have several special powers, and have the ability to regenerate their health and horde quickly if left alone. 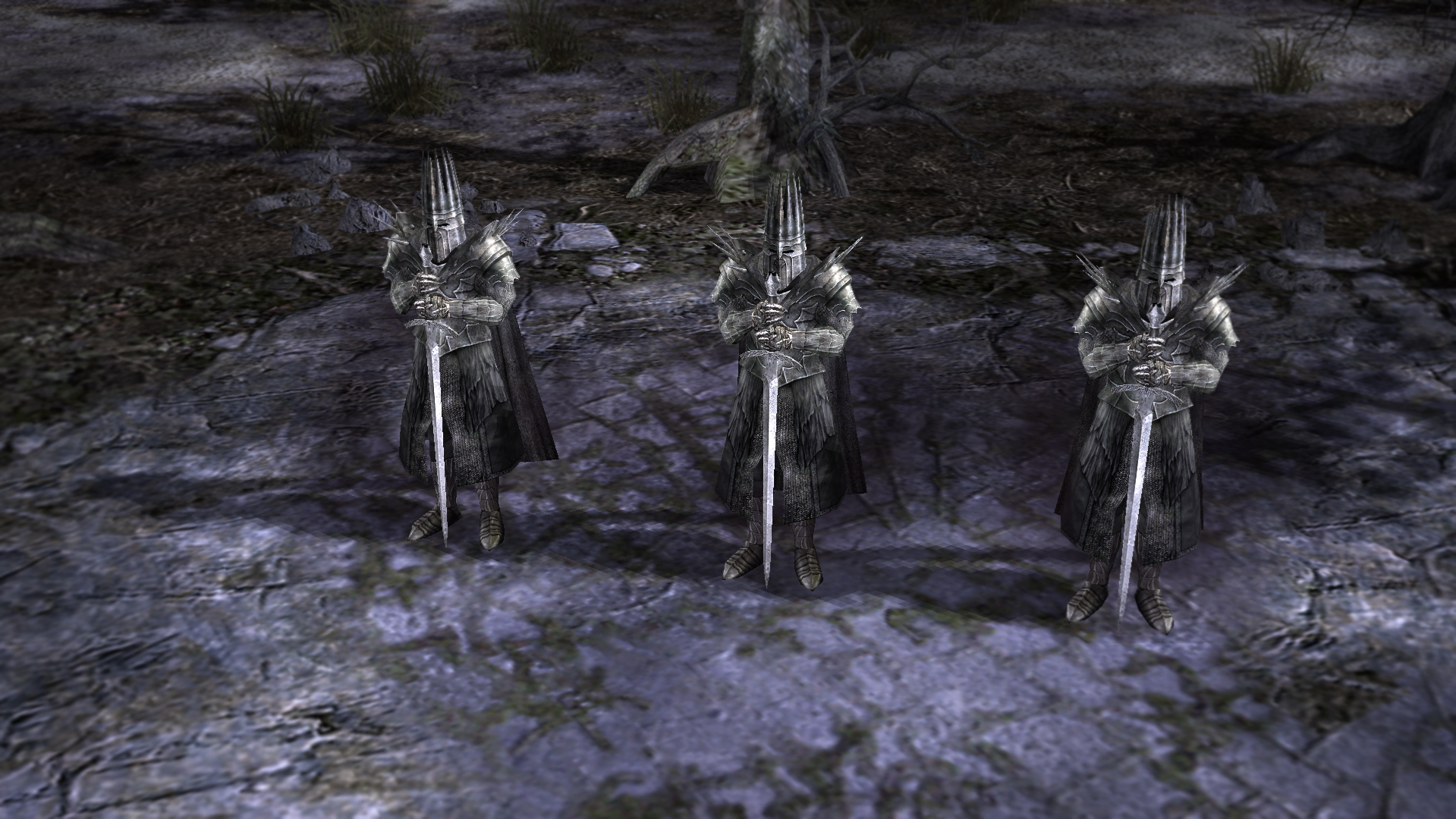 For a full overview of what is coming in Dol Guldur, we refer you to our public faction plan!

So, about that Age of the Ring campaign... you doing any more?

Yes. The response to our original campaign has been amazing, so we're going to do our best to deliver more. Work is already underway. 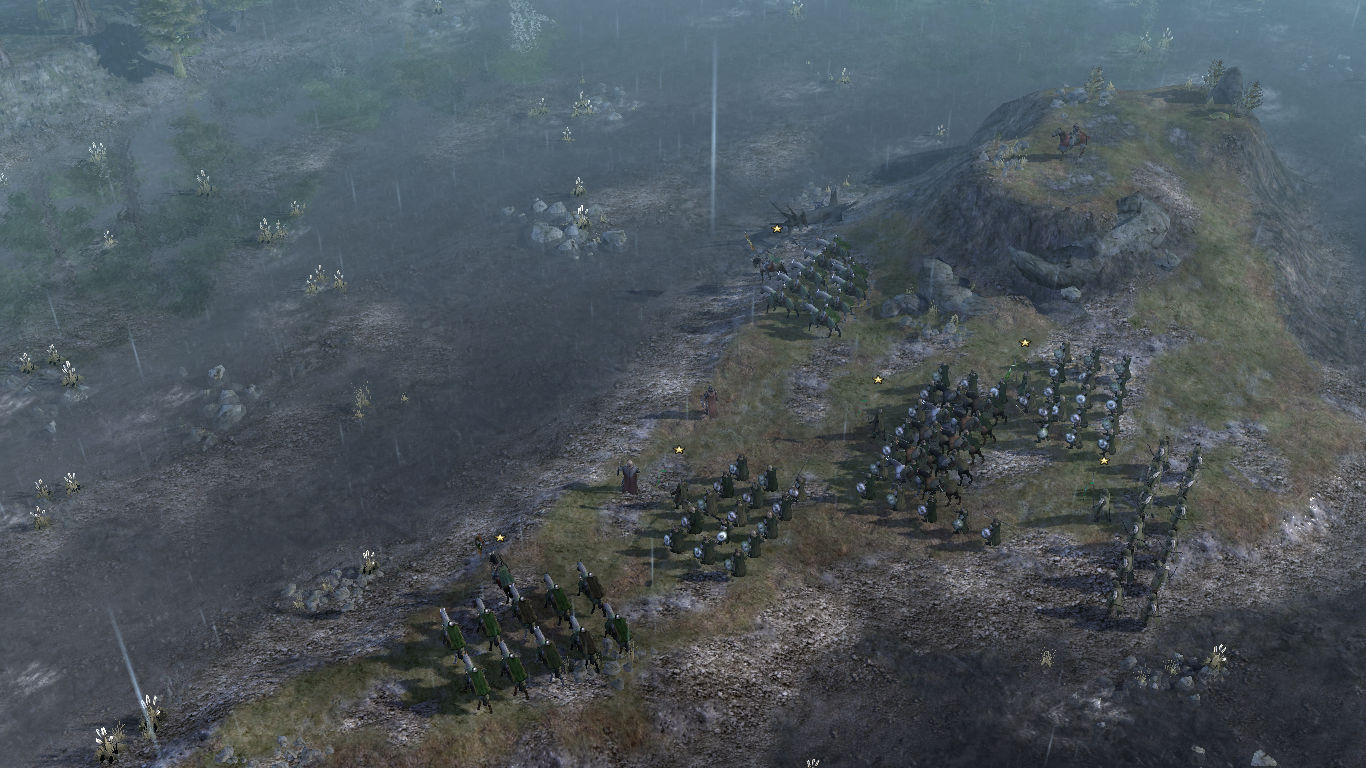 Well, that's about it!

Remember: The Mod of the Year awards are underway!

Lend us your vote!

Really awesome that next patch is more than balance and bugfixes. I am excited to play BFME2 campaign again with the AOTR models, really happy that you made this effort.
The Dol Guldur screenshots are neat and scary at the same time, hyped for this faction.

I really enjoyed this update, thanks for keeping us always posted :) You can feel the reciprocal love with your fan base

Sounds very promising! :)
I hope that you guys add the option to play with custom heroes in skirmish with Rohan and Rivendell (at least for me they were not available).

OdoProudfoot When? While setting up the skirmish, I can select all villains for evil factions, and good heroes for any good factions, except for Rohan and Rivendell, where I can only select " - " and "Random" (but that does nothing).

It's weird. Took me forever to figure it out. On the skirmish setup screen, open the dropdown menu that lists the custom heroes next to Rohan or Rivendell. Then click on one of the greyed-out names. It does nothing but then if you type the first letter of their name, it will select them. Repeat the process if you have multiple heroes with names that begin with the same letter.

Wow really great stuff, can't wait to see more! Are some of these new maps going to be implemented in WOTR sometime in the future or am I putting the cart before the horse here? :p

Cool! looking forward to it. Btw, is just me or is the dol guldur faction kind of tiny? I feel like it doesn't have a lot of different units? Any more ones coming than those set out in the plan?

Hello there, how are you ?

I just discovered this mod on last week and i reinstall this game immediately on my pc for testing this.
The result is just amazing :
-The short campaign is really nice !
- The map hazards is just a big idea never imagine for this game before and i love it !
- The maps, but the maps and the maps ..... Excellent work !!! A great mention to Erebor, i fall of my chair when i see this !!!
- I take so much pleasure to try the new factions.
- The expansion of war of the ring is just... nice ! (This is my prefer mode on this game). The vanilla mode was so short and your expansion change this.

Just a little but very little, little, little negative comment for your mod : The IA. She's so stupid but very stupid (in normal mode) ! On the beginning of a game, she's attacking your buildings immediately with only one or 2 poor units . Yesterday, she's sendind Aragorn alone (yes, alone) to attack my big fortress (Mordor Faction), so hero or not Aragorn was killed on 3 seconds :( She's ignoring your units even she's in superiority when she's near buildings even when your attack her ...

Except IA problems (please notify to me if this problem came from me or not), i like your mod and continue to work on this mod please, please, please :)

From France with love :)

1. There are two campaigns in AotR 4.0 (three in AotR 4.1), The Fellowship of the Ring campaign is about as long as the Good Campaign in BfME 2.

2. We're glad that you enjoy the map hazards, we love what they add to the atmosphere of the environment.

3. Thanks, I 3d modeled and mapped the movie-version of Erebor. AotR 4.1 will have three unique Erebor maps in total (two fortress maps and one campaign map). ;D

5. WotR mode is improved in AotR 4.1, so if you run into a bug or crash then please sit tight, it will be fixed soon.

6. It's called AI, Artificial Intelligence. If you'd like to make a suggestion or bug report then please visit our official forums. Forums.revora.net

Try the game on Brutal if you don't mind. ;)

map where the Fortress of pelargir breaks the landscape, I have units running across the sky, the contour needs to be finalized)
Archet, a small town in Breeland, near Fiodor
this map has a slightly cropped river)
add water)
very, it is a pity that you not will make modelki nazgulov from screen version of the hobbit, very would like Khamula see with horns and Mace( suppose 1 and higher of ordinary Rob, 5 and higher of your option with mask and 10 and higher of option with horns and Mace)
and the have evil factions no almost transformations with levels there is no
the company has been reworked a lot, I really liked it, it was great to see new models in the game that will not be added to the game soon)
well done!
Ah Yes, The map of Rivendell fortress, still bridges break and units can not pass through them, as well as on the map of Erebor in the Dale of the main gate

When is ROTWK HD going to be released?