XHL/XDM is a great modding platform (like SoHL), not only for singleplayer, but for all game types. Check out videos to see some of the features.

What is never enough? Chicks, bucks, FPS? Umm, no. Testing of course! 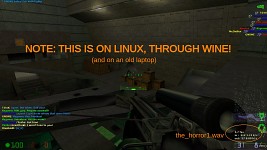 Test it on Linux, they said. Use the force, they said. So I did. Terrible, terrible it is! But it's WINE :D
Ok, Linux by itself is not guilty, probably. And also I didn't run HL/XDM natively. The main thing is - old APU. I don't have any other, sorry :D

Now, some good news: LLAPb (don't read that in latin) made a huge attempt in porting z-bots (cs-bots?) to HL/XDM. And they work! To some extent. Well, they move, that is. And shoot. And lag. They eat so much CPU that oughtta be careful to not to burn your house down. Most likely, the problem lies within navigation algorithm, but it's not easy to track down, provided it's completely new foreign code all around. Also, I made some minor fixes and a little addition: now model/character.txt may specify custom voice pitch so you don't have to duplicate voice packs just for that.

See ya! I hope you learned something.

A new upcoming Capture-the-flag map for your viewing pleasure!

Hello there! We're here to say that, well... XDM continues! Remember the map DM_Vault? Let's say, it wasn't meant to be complete the way it was released...

The game is ready, so are the sources. But where can they be found?

how i add the death sounds to work on this mod? a lot of hl1 original sound files was not there inside the folders of this mod, like the barney,hgrunt pain/death sounds etc... that beep sound when you die don't happen on this mod i tried messing around trying to put new death sounds on this mod but without sucess, i added the originals pain/death sounds that was not present in the folder of this mod i messed with sentences.txt added new lines for medical HEV_DEAD0 HEV_DEAD1 2 3 4 etc... to have more variety instead of only that annoying medical beeps i replaced the ''HEV_DEAD0 fvox/beep beep, beep beep, beep, beep, flatline'' and ''HEV_DEAD1 fvox/beep beep, beep beep, beep, flatline'' for
HEV_DEAD1 player/pl_death1 HEV_DEAD2 player/pl_death2 to play my custom death sounds but doesn't play anything inside the game the type of the files are .wav i even edited these custom sounds on audacity to make it equal to the original .wav files with 88kbps i even tried to do the volume stuff near the command line like (v100)? is that correct? i don't know if that part ''// SPEECH SYSTEM SENTENCES'' inside sentences.txt have anything to do with the volume of the death sounds not playing it but i added (v100) and after i tried (s100 v100) (assuming ''s'' is start and ''v'' is volume) so i got it like this HEV_DEAD1 player/pl_death1 (v100) and after all these steps still not working what i am missing?

There've been a bit of bug-fix progress and also another former HL modder tried to port some modern CS bots to XDM.

Really great mod. Im enjoying the new voiced players. One issue I found with the CTF_Face map though is that whenever you mark a flag with the waypoint system all that team's bots just run around their own flag and never attack. I know you probably dont do any dev work on the mod anymore but any suggestions to fix this?

Is this compatible with steam?

Yes. At least it should be. :D

Lel. I Idk why. But there's unprecached model in this mod.
Host_Error: PF_precache_model_I: 'models/w_weaponbox.mdl' Precache can only be done in spawn functions. Why is this unprecahed in dll?

In which case does this happen? Does it crash the game? XDM should only need this model if Weapon Drop policy is set to "All". Or when someone places weaponboxes on a map.