Is a global modification for GTA: San Andreas which brings to the game an atmosphere of winter frosts and Christmas holidays.

Most part of the state San Andreas is covered with snow (Bayside city, Angel Pine, Mount Chiliad...); you can see Christmas tree with toys and meet absolutely real Santa Claus (he waiting in the Bayside town near the Christmas tree!); sounds of the winter nature (sounds of the strong wind and snowstorm); winter vegetation (based on modified Project Oblivion 2010HQ); new objects on the location (including snowman); new particle effects; special settings for ENBSeries etc.

Mod is good optimized and has special menu for change ENB settings and low quality textures pack. A lot of bonuses are included.

The first version of Winter Vacation was released in the end of 2010; modification has begun a series of mods, it was followed by Spring Season, Endless Summer and Autumn Sunshine... Version 2.0 is fully redesigned and completes series.

If you are a beginner, just try version with auto installation:

Soon, to the New Year, in the end of December 2013, mod will be released in updated edition.

Mod will be more beautiful, faster and better. Will be fixed some things and enhanced graphics.

Also updated edition of Autumn Sunshine, beautiful and powerful autumn modification, is in the development. This mod also will be released these days, in the end of the month.

News is updated: release delayed to 2014.

News is updated again, 25 July 2014: unfortunately, updated edition is cancelled due to a hard drive crash with all work files.

Most part of the state San Andreas is covered with snow; you can see Christmas tree with toys and meet absolutely real Santa Claus; added sounds of the winter nature (sounds of the strong wind and snowstorm); winter vegetation; new objects on the location (including snowman); improved graphics (new particle effects, using of ENBSeries library with special settings etc).

Originally mod was released in 2011. 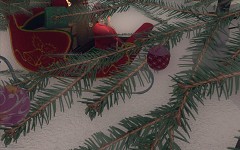 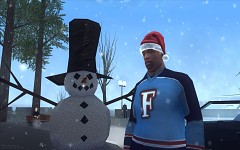 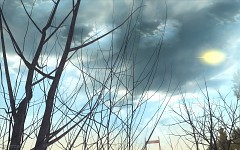 About nuances connected with saving game in Hunter's House.

This is version with automatic installation, recommended for all users. Read description for some details.

This is version with manual installation, recommended for advanced users. Read description for some details.

Special version compatible with SA-MP mod. For single-player use original version. Read description for some details.

Is there a way to get the ENBserie out?

Yo, Gameplay_EN.txt is not in the folder, help!

Go to the Downloads section, select needed version of the mod and download it. For example, here is download link for the version with auto installation: Moddb.com .

If mod was installed correctly, you can find a big part of the state that was covered with snow; other part of the state will look like in late autumn (because snow fell not everywhere, but thanks god it fell!).

I LOVE THIS MOD!But I have a few questions:
How can I toggle the snow falls?
How can I sleep in Journeys (I saw the .cs mod in the cleo folder)
How can I set up tents?
Are those clothes included? :)
Thank you for your work :*

Glad that you liked our modification.

You can toggle falling show by press Ctrl + "+". About Journey - press Shift + Y when you in the car, to install the tent find flat place and press P + Shift; clothes are included to the mod.

Ty :)
For some reason the Gameplay documnet (the English one)isn't there.Maybe I deleted it :P