In mod you can see dynamic falling leaves, and already fallen leaves on the pavement and grass: in squares, forest, on the roads... You can see autumn trees — yellow, orange, red and, sometimes, still green, as always in warm autumn. Fog in the morning and in the evening. Special atmosphere sounds: cawing of crows in the morning and, sometimes, subtle rustling of the wind...

Also in mod is using ENBSeries graphics library that is specially configured for mod (using of palette makes the image more pleasing); with special menu users can easily configure graphics for their computer.

Mod, as it was said, have a lot of gameplay features: wild animals in nature (this feature came to mod from mods-precursors — Spring Season and Endless Summer — but have been improved and expanded; for example, in autumn mod was added a new animal — the coyote, you can find it in the desert; also you can meet two species of wolves, two species of bears, foxes; you can see your friends hunters with their dog and near the farms you can see chickens and roosters); hunting; ability to buy Hunter's House... In the Angel Pine village you can visit the exhibition of biggest vegetables in the state.

Autumn for many people also associated with Halloween. Residents of the state are preparing for this holiday and arrange pumpkins and other festive decorations near their homes. You can dress in Halloween costume and when it considers that it is time to start the holiday, you can set the costumes for residents just in one click with new special menu!

And these — not all features of the mod. Autumn Sunshine offers a wealth of innovations related to the autumn season, and you can spend a lot of wonderful moments with this beautiful mod.

(Read here some details about new and improved content in updated 2014 edition).

You can watch a lot of Autumn Sunshine videos

If you are a beginner, just try version with auto installation:

Autumn Sunshine mod was released in updated edition. This is really global modification for GTA: San Andreas with unprecedented approach to the quality; is the successor of Endless Summer; modification about beautiful time of year — autumn.

I am glad to present you release trailer of the mod.

This is better variant for all users: installation of mod is very easy, you just need select the game folder and click on the button.

This version recommended only for advanced users.

This is special optimized and adapted for compatibility with SA-MP online mod version of Autumn Sunshine. It does not contain lot of features from the main mod.

Whole game will look autumnally! Location was retextured and changed: totally new textures of countryside, Angel Pine, Chiliad mount, Bayside town, El-Quebrados, Fern Ridge, beach in Los Santos, some parks, a lot of roads and different surfaces in cities and other; textures are exclusive for this mod and were made with an accent to the autumn time: grass is other now and there are many — on grass and pavement, roads — fallen leaves. 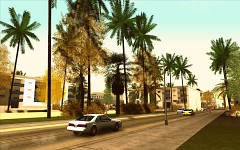 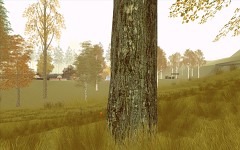 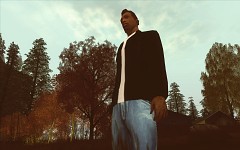 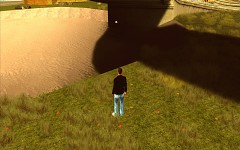 Most of textures are photorealistic and based on the author's photos; using textures from HRT 1.4 — project of full remastered GTA: San Andreas that in the development now (most likely HRT 1.4, when it released, will be fully compatible with Autumn Sunshine; now Autumn Sunshine has compatibility with old-gen HRT Pack 1.3: Enhanced Edition).

Beatific decoration of the mod — are autumn trees with yellow, orange, reddish, and sometimes almost green (as always happens in nature) leaves. Trees are based on heavy modified Project Oblivion 2010HQ mod (in updated edition on trees were added MIP maps — this means that they look smoothed and its textures do not flicker). 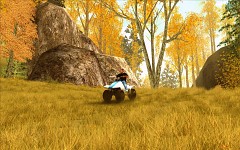 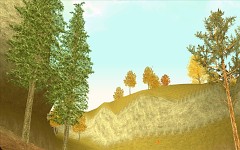 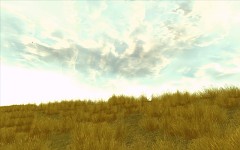 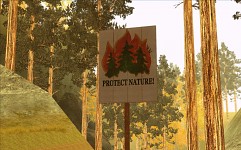 A lot of new objects on location: Hunter's House in the forest (originally first appeared in the Spring Season, in every The Seasons mod it was seriously refined and improved, and in the updated autumn edition it was seriously improved again: now it has windows; were used new materials for model of the house, with help of them roof now is sprinkled with leaves); abandoned well — it has its own history; windmill on the hill beyond the forest; pavilion behind the CJ's house in Angel Pine (you can seat there)... In Angel Pine an exhibition of vegetables is held this autumn. Good chance to look at the giant pumpkins!

In Pershing park now you can see detailed voluminous piles of fallen leaves (this feature was added in updated edition). 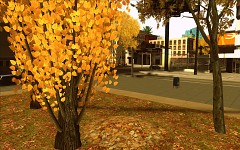 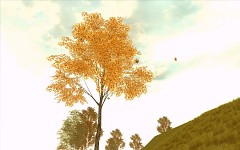 Were made a lot of changes, connected with oncoming on the state Halloween: near the houses were installed pumpkins, added holiday billboards and pictures with Halloween symbolic; in countryside near the houses some people cultivated the pumpkins. 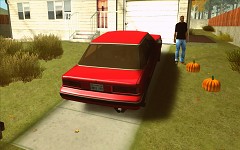 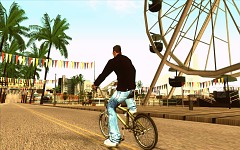 Not only CJ (he can wear special new Halloween costume or one of accessory from new wardrobe), but also peds on the streets can be in Halloween costumes. When you considers that it is time to start the holiday: you can, with using of special menu, enable of disable costumes for state residents! This is a really unique feature that made special for updated edition. 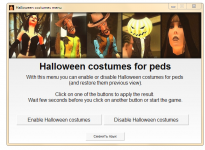 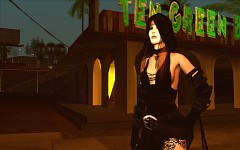 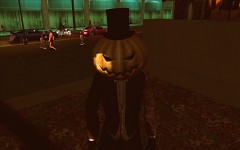 Modification continues the tradition of Spring Season and Endless Summer and allows you go hunting! You meet wolves, bears, foxes in forests and coyotes in desert. (If you do not like hunting — you can just watch for animals but note that almost all of them are extremely dangerous!). You also can hunt with your friends hunters and their dog. 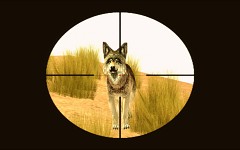 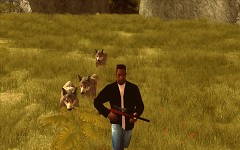 In Autumn Sunshine to animals from previous The Seasons mods was added new one — the coyote.

Special for Autumn Sunshine was created graphic settings menu. With this menu user can configure mod for good performance on any computer and change one of graphic presets. In updated version of Autumn Sunshine user can select even quality of textures! This is unique feature of this mod, that never was made in other mods. 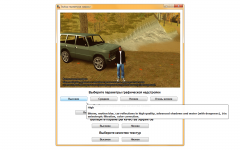 Added atmosphere sounds of autumn nature: you can hear birds singing; cawing of crows in the morning and, sometimes, subtle rustling of the wind... 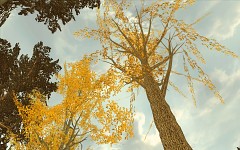 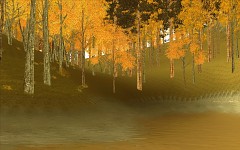 Also: there are several new types of clothing, new weapons — hunter's knife, hunter's rifle and wooden stick, new girls models, some new pedestrians; you can install the tent and sleep there; you can buy the house in Bayside; you can see people sitting around a bonfires in different parts of state; drink in bar on Santa Maria beach; ride in the Ferris Wheel; people will walking in the rain with umbrellas; at several points in the state you’ll find pens with chickens and roosters and will hear a rooster’s scream...

Besides those already mentioned things, in updated edition of Autumn Sunshine were made: pavilion is also sprinkled with leaves; remade a lot of forest and countryside textures; remade observatory textures; added MIP-maps on absolutely all textures in the mod, this optimization helps to improve performance and makes the graphics more pleasant; fixed some glitches; made compatibility with Windows Vista, 7, 8 and new English translation, and a lot of other little changes. (You can read full list of changes in instructions). 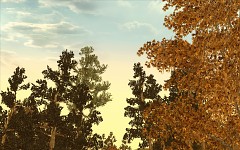 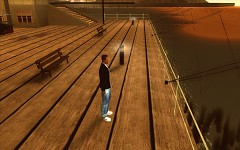 Autumn Sunshine soon will be released in updated edition

About nuances connected with saving game in Hunter's House.

ReadMe from the main version of the mod (version with auto installation). How to install mod, hints and tips, full list of features, list of things that...

Autumn Sunshine with automatic installation (recommended for all users).

Autumn Sunshine with manual installation. (Recommended only for advanced users! For easy and quick installation use version with auto installation).

Special edition of Autumn Sunshine for SA-MP mod. For single-player better use the main version of mod.

I think the same. Thank you!

Wow! It seems perfect! I'll give it a try.

For compatibility with SRT you should download Autumn Sunshine with manual installation. At first, install SRT over the clean game and then Autumn Sunshine. Read instruction for details.

But I did not tested this variant. Write after installation, please, if you want. It will be helpful and for other users.

This year. :) I still can't say exact date. The exact day will be, if I will be sure that mod will be released in time.

Great Mod. Except animals... I got a Crash to Desktop right before "Small town Bank" mission..

Thanks. Did you have crash when you tried to pass mission another time? Very sad to hear about the problems. I have not had a chance to pass the whole game, but in free gameplay I did not see any bugs and crashes. Maybe this is connected with Windows 7 64-bit (SA is an old game), if you use it, or included trees mod, part of mod which I not always can fix. You can try also pass mission in another, clean copy of GTA, and then continue play with mod.

Yes, It crash everytime at the same point when I enter the Red Marker (right before starting. In free gameplay there are no crashes, only random ones, when you play a little longer. And yes, I have Win7 x64... I thought maybe some modders / testers will fix this. Its a great mod. have a nice day and excuse my English :)

Thanks, have a nice day too. :) My English is not ideal. But do you have crashes and in original game? On the off-chance, try the compatibility (with Windows XP) mode.

I`m playing clean original right now and for the moment there is not a single crash. I am not using compatibility mode for now..

Thanks for answer. I do not try to accuse someone, but crash can be connected with Project Oblivion mod, and can be in all mods with PO mod too (or maybe with work on Win 7? I cannot say. Just the original game was not contain ENBSeries etc.), little sad; very interesting to know, with what it is connected and how to solve it, because I can vouch for my files.

And an another variant - you can disable all scripts from mod (move all files from CLEO folder except memory512 to temporary folder) and try to pass mission again. Write me, if will be some results.