If you wish to help, check our recruiting form!

If you like what we're doing, support us on Patreon. Make the mod stronger! Exclusive teasers included.

Memes burning a hole in your pocket? Subscribe to our subreddit!

So, it's decided then. I mean uhhh… Hello! We're henceforth going to start adapting the Warcraft: GoA for CK3. The temporary name we have given it is the Guardians of Azeroth: 2. It will take plenty of time, but we will be posting all the progress just as we did with CK2 GoA.

Though CK3 lacks some features (waiting for the coming DLCs), it has some nice functionality that suits Warcraft very well, like religious confessions due to a huge number of religions and a complex system of their relationships. So, the Wildhammer dwarves and taunka might end up with different confessions of shamanism.

We want to announce that once again we're recruiting people for all positions, these are:

Any kind of experience is welcome, but lack of it shouldn't be a problem if you're active and want to learn. We have guidelines to introduce you to the modding process and GitHub.

Having more people will significantly speed up the development so we're waiting for you.
Apply here now!

Greetings, I’m MW, and it just happened that the one who works on the magic system is me. So, apparently, I must initiate you to the mysteries of whatever I’ve been doing for a year.

Since we decided to base our system of magic on the chronicles, there are 6 Cosmic Forces that we implement: Light, Shadow, Chaos, Order, Life, Death; and 4 elements: Fire, Water, Air, Earth. 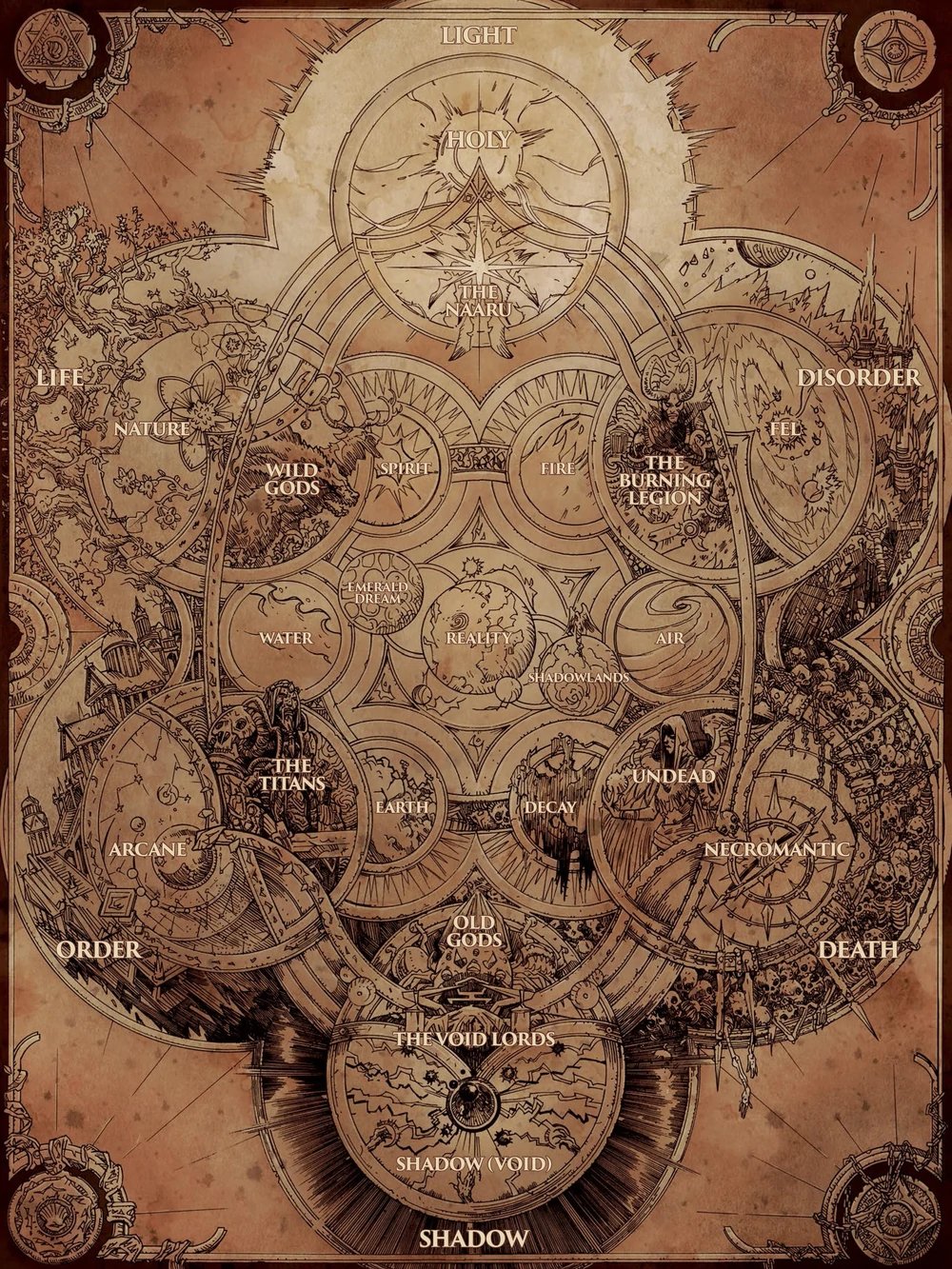 There is neither “Spirit” nor “Decay” among the listed types of magic - they are not separate types of magic, but we will come back to them later - and to how the fifth and the six elements are interacting with the first four.

We plan to make magic lifestyles - one per type of magic. They will be an addition to the vanilla 5 lifestyles, so if you wish to, you can completely ignore all magic and roleplay a ruler, like Terenas, who is neither a warrior nor a mage.

Elemental Magics are used by monks, shamans (dark and not), and even mages. They are pretty straightforward and correspond with 4 elements - Fire Magic, Water Magic, Air Magic and Earth Magic. 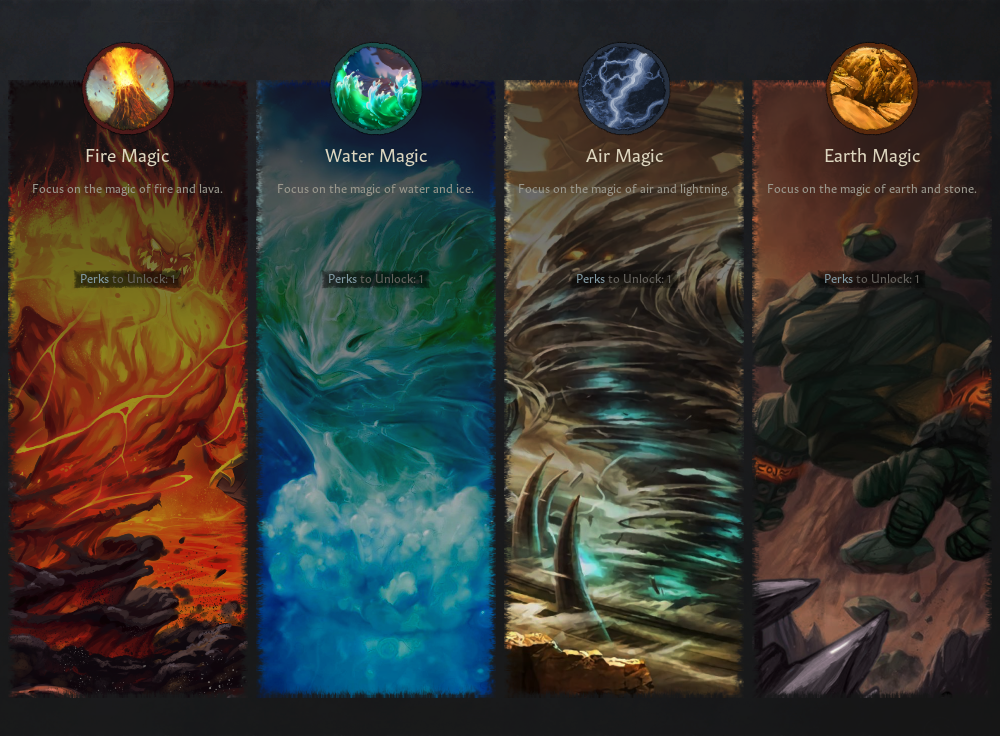 Let's look at them a little bit closer. One of the first things you will notice is that magic lifestyles don’t follow the vanilla pattern of giving character a trait for finishing a perk tree. Instead, the character gets a trait when they unlock a perk in the lifestyle. As the character unlock more lifestyle perks, their traits will be upgraded.

These traits will decide how other characters might perceive them. - I’ll talk about that in detail a bit further.

Perk trees in the new magic lifestyles are too early in the development, thus not ready to be shown yet. However, it also means that if you have an idea for a perk you want us to implement, you can send your idea through this Google Form.

Skipping the perk trees, lets look at the perks itself. We plan that some perks will give access to new Spells, 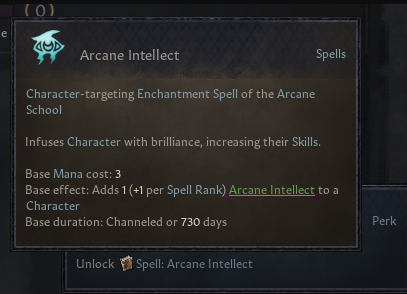 while some others will upgrade already existing perks.

However, you will need Mana to cast them.

In order to use magic, we added a new resource - Mana. You can find its amount, maximum, and monthly regeneration value in the resources HUD or in the character window, when you hover over a character’s mana value.

Perks in magical lifestyles have a side-effect: they increase Maximum Mana. 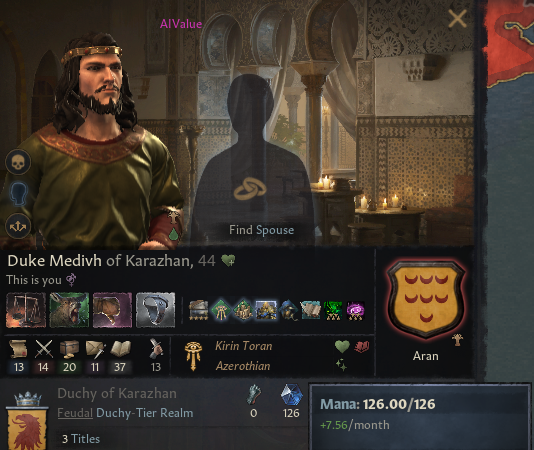 It’s up to you how to spend it - you may spend it on whatever spell you may cast, 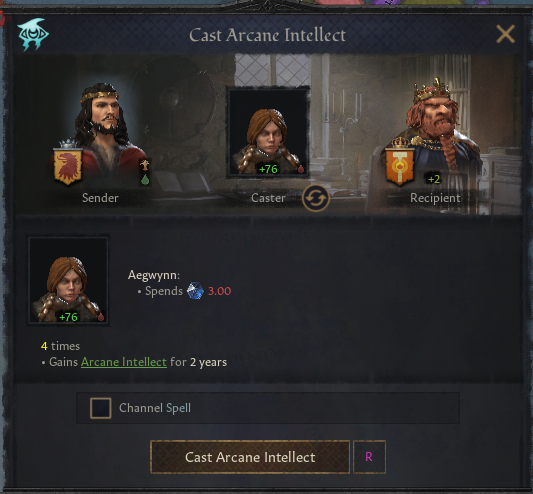 I’m still working on the spellcasting system itself, so it’s one of a couple working spells I can actually show you.

…or don’t spend it at all - also a legitimate strategy, as your character may benefit from unspent mana too. For example, increasing Mana Conductivity may lead the character into receiving more prowess from available mana. 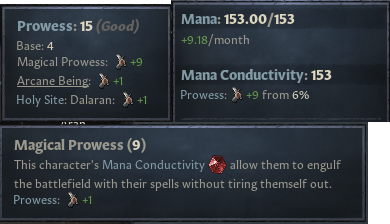 If you are wondering what the Channeling option is - that’s QoL for players who like to cast buffs on characters, but don’t want to renew them every few years. We plan to make Channeling Spells whose effect is active until the caster stops channeling it, or becomes unable to channel it anymore.

Elemental lifestyles deserve another word about them.

They will have a special mechanic to determine a character’s relationship with the elementals.

To show the difference between Spirit and Decay (about which was mentioned briefly with magic schools), we created an Elemental Goodwill mechanic. We plan to use it extensively in elemental magic lifestyles events and spells. The idea behind it is simple - if you are friendly with the elements, your character has high goodwill, which makes them a shaman. A shaman is respected by those who venerate the elements, and use Spirit to commune with the ever raging primordial forces.

Your character prefers to subdue elements instead? It will certainly lower goodwill, making them a dark shaman. Dark shaman is not very liked by those who use Spirit to venerate the elements, but would be respected by those faiths that use Decay to venerate them.

Maybe your character is not too radical in either way, not enslaving nor serving the elements, but instead controlling and regulating these chaotic forces? Then they may become a mage.

Depending on idolising doctrine, actions of (dark) shamans may be viewed as pious or impious. Think twice before asking for help, subjugating, or helping the elements. 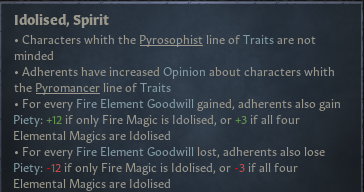 Three traits - one for shamans and monks, one for mages, one for dark shamans

Each faith has magical doctrines that regulate how adherents of the faith look at magic users, and what focuses in magic lifestyles adherents can choose. 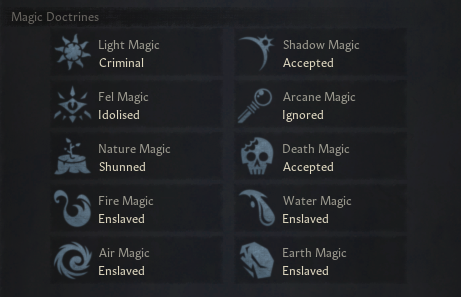 Each cosmic force has its own doctrine with 5 possible variations.

I’ll make a quick remark about ones that are very similar to vanilla criminal doctrines:

About the other two… 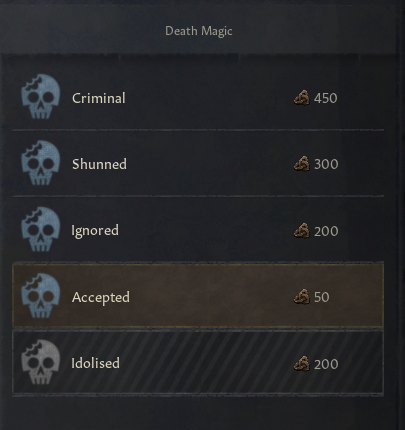 Ignored, a faith with that doctrine variant doesn't see anything extremely shameful in practicing that type of magic, but also doesn't value it. Characters without prior experience or outside help will find it very difficult to start learning it, as they will have no default access to focus in this magic lifestyle. However, if they manage to learn how to wield that magic, adherents from this faith wouldn't mind that. 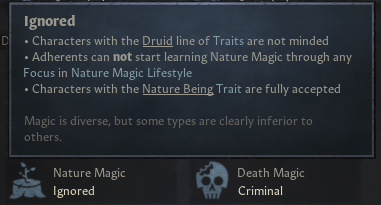 Idolising maybe would not raise the mages to the rank of the divine, but it’ll at least give them some respect from the masses. The higher their magical trait level is - the more respect they gain. A faith can have only one Idolised cosmic force, but elements are a bit different in that matter… 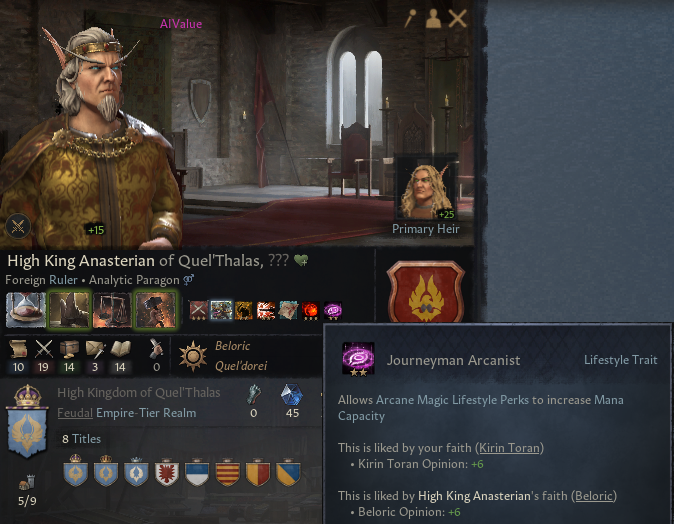 Each elemental force has their own doctrine with 8 possible variations. Accepting doctrine is divided into 3 new ones: Controlled, Harmonized, and Enslaved. Idolizing into 2: Idolised, Spirit and Idolised, Decay. 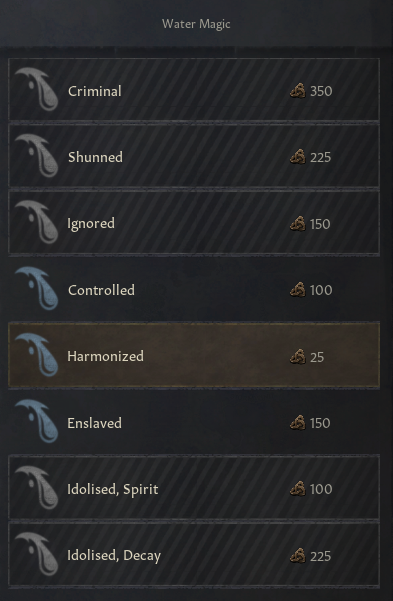 Two variations of idolised magic - Spirit and Decay - represent faith’s opinion for interaction with the elements - as we already talked about Elemental Goodwill earlier.

Unlike with the cosmic forces, you can have one or four idolised elemental magics.

For example, those who serve Ragnaros or Theradras could have only one idolised magic. 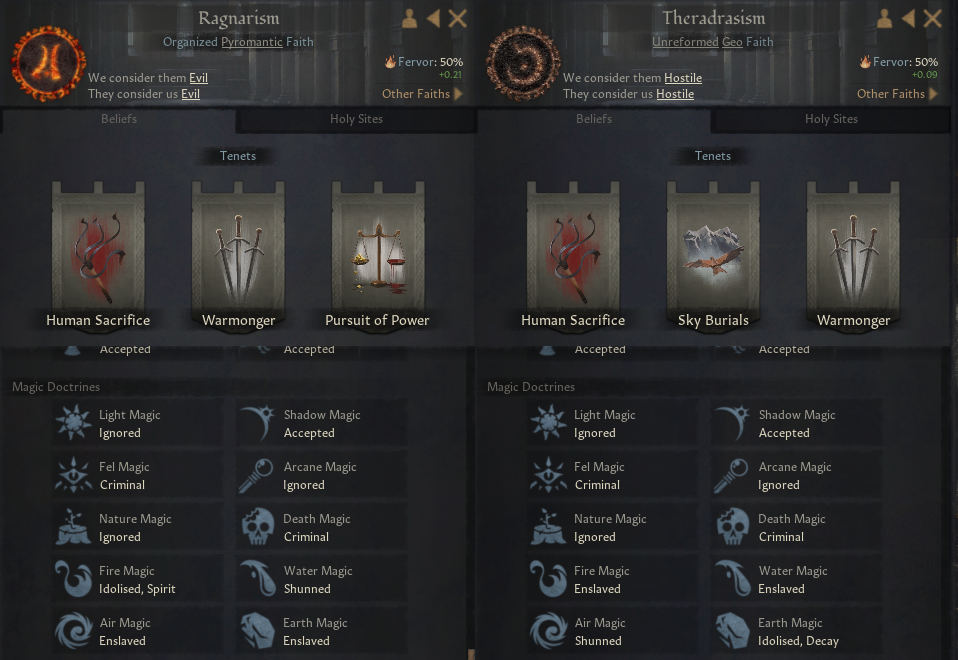 While taunkas and orcs venerate all the elements. 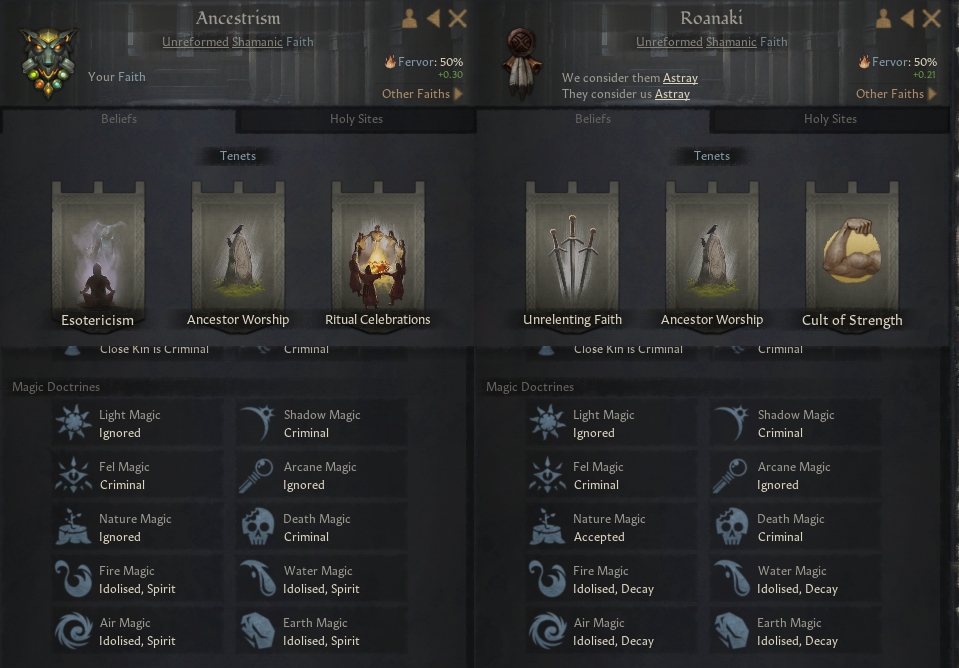 Let’s look at three elemental doctrines that the accepted doctrines were divided into:

We have a lot of plans, for now we added 8 new traits, 6 of which are congenital, to represent sorcerers - mages gifted from birth, in contrast to wizards that need to learn how to wield magic. Aside from a small bonus to learning magic a bit faster, sorcerers will receive a large pool of mana, increased mana regeneration, and bonus to Mana Conductivity for prowess conversion to represent their innate battle spells. 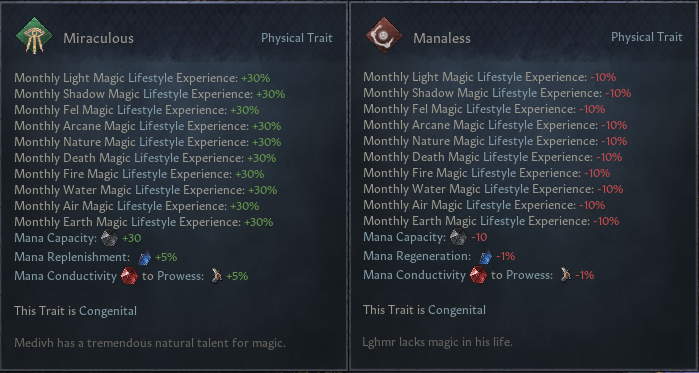 That's all for today! We will keep designing magic lifestyles, adding new spells so we can show our progress later. As always, if you have any feedback, feel free to share it. If you like what we're doing, consider supporting us on Patreon. If you have free time and wish to bring the release closer, we would like to Recruit you. Thanks for reading and thank you for your continued support! Until next time! 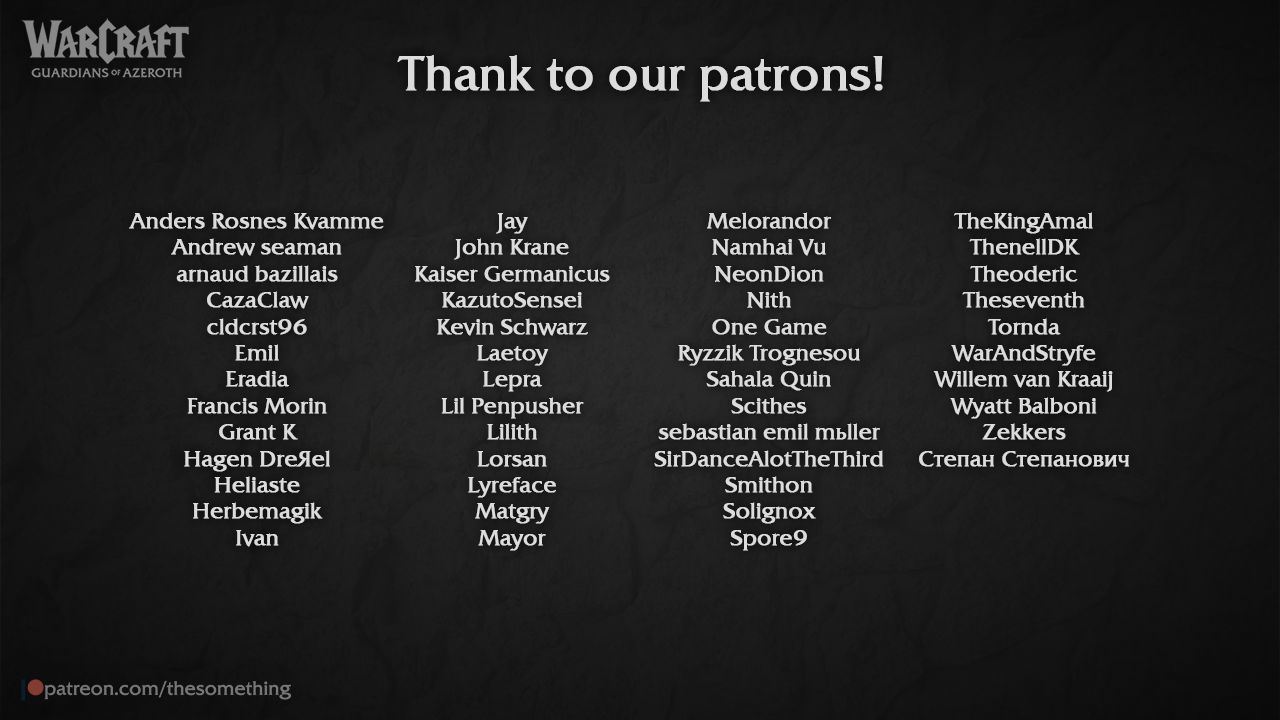 Hello! In today's developer diary, we will show Arthas' expedition storyline, Frostmourne, and its unique mechanics.

Hello! Thanks to Paradox, we have gotten our hands on the upcoming Royal Court DLC.

Hello! In today's developer diary, we will break down the Scourge: the Lich King's features, Plague, and Scourge men-at-arms.

Seeing all the appreciation, support, and excitement surrounding our hard work is enough to give us that extra push to keep working to make this mod the...

Nice work! Will there have new model for soldier? The vanilla game of CK3 only has less different model of soldier on map. I hope elf ranger, undead knight and human caster will have different model.

Will see. It's not a priority for our 3D artists, we focus on characters so far.