Last Alliance: TW is overhaul mod to Shogun 2. This mod base on stories from Tolkien's books, concretely on wars Dúnedain and Elves against Sauron at the end of the Second Age. This still WIP, but is avaiable alpha with playable prologue campaign ^^ In final version will be two campaigns: Akallabêth and Last Alliance War.

There are no release dates for future updates. Don't ask about this and don't predict release date.

Campaign will be expanded (new lands and factions) in next patches. Link to roadmap is above.

After finish this will be prepared Last Alliance War campaign with a bit different campaign map.

If the download is slow, open the mirror server list and select a server from your region.

During this year, Last Alliance received a lot of content. Many new units, models, balance changes and much more. I think that's pretty good progress even if there have been some major and minor problems along the way. So I thought it would be good to summarise it in one article.
The summary will not be chronological. I want to summarise the changes by category rather than the time in which they were introduced.

Glory of Númenor and Lindon

Númenor was the first faction to appear in the mod and has been almost untouched since its release. And Lindon, to be brutally honest, was released in a pretty poor version. So I set myself the goal of refreshing these two factions.

In the case of Númenor, I have improved or remade most of the models and textures. As a result, I have made the Númenor army look incomparably better than before. In addition, I didn’t just stop there. Númenor got quite a few new units (like Venturers, Marines or regional Andunie Archers), as well as a new unique hero - Isildur.
This is still not the end of the work on Númenor, but you can already watch the glory of their army! 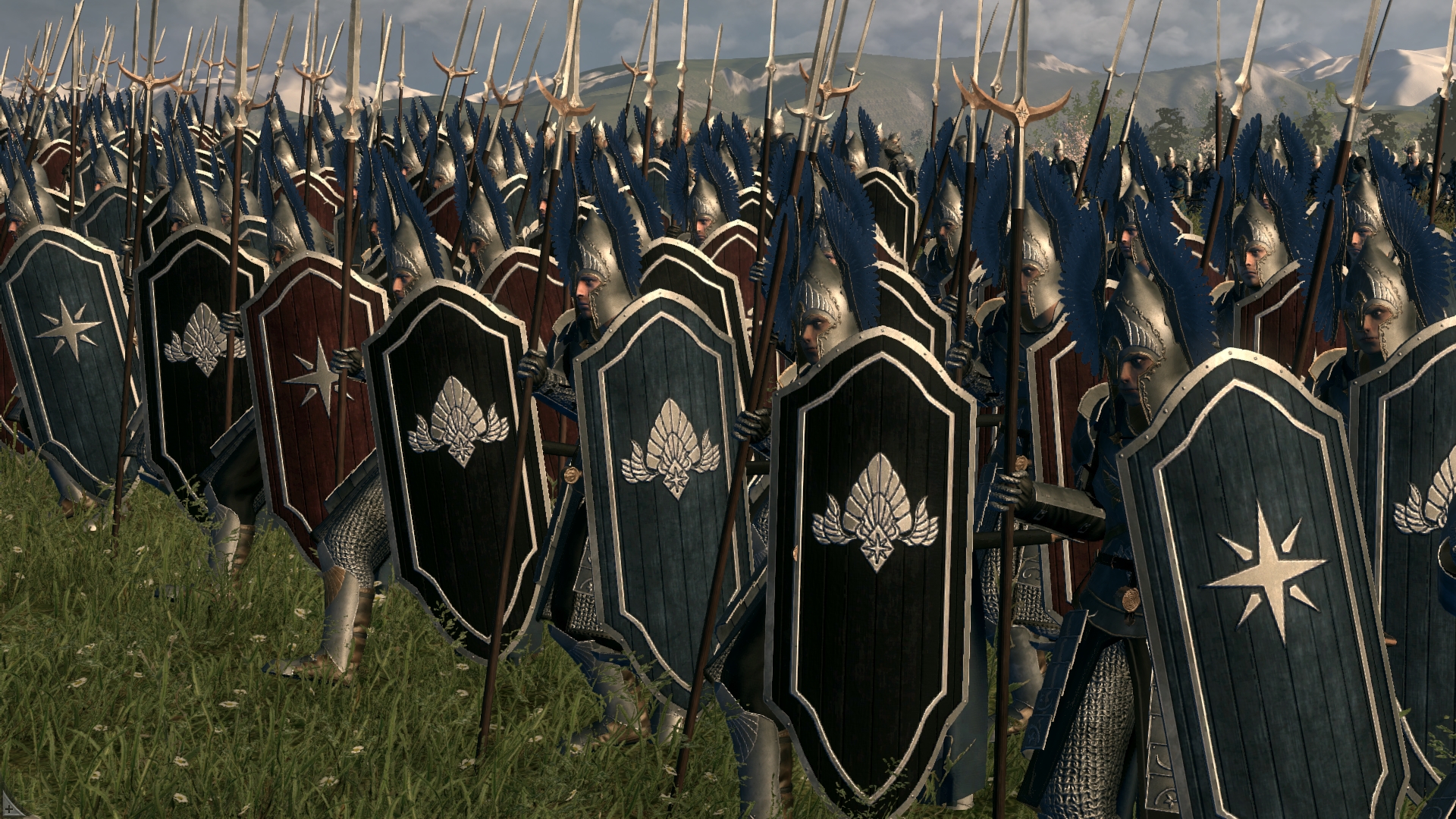 In the case of Lindon, their army suffered from a lack of Sindar units. So I have ensured that now the Sindars are represented by more units than just the Falathrim living on the coast. At their side, specially regional forces like the Guard of Mithlond and the Blacksmiths of Eregion also entered the battlefield.
The Noldor units in the base roster have also been improved. In addition to the most visible change in the form of a colour change of armour, they also received many new models, as well as a refresh of the existing pieces of equipment. 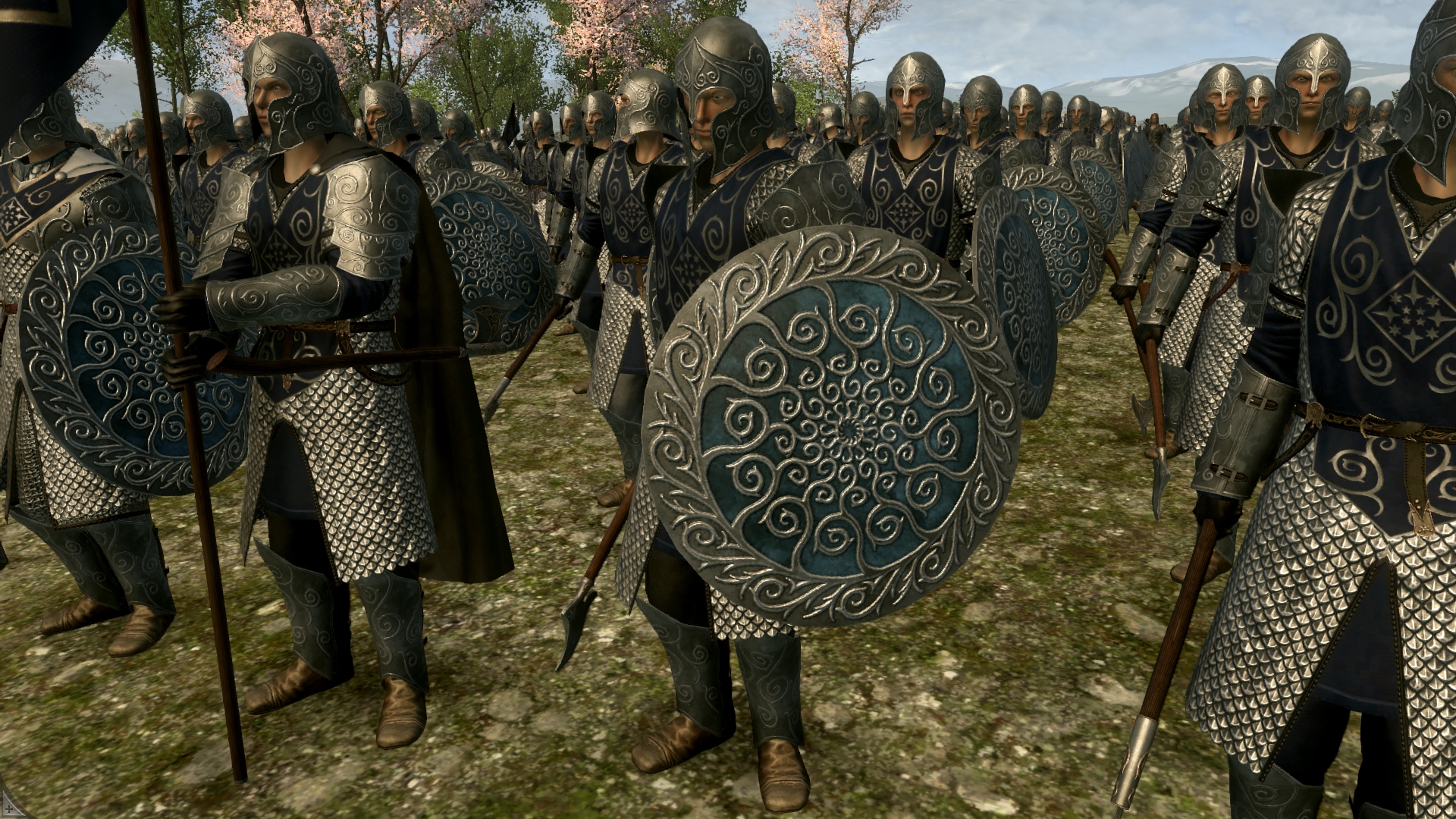 One of the most anticipated elements of the mod was Mordor (Okay, honestly, all factions seem to be highly anticipated, even the small wildmen factions). 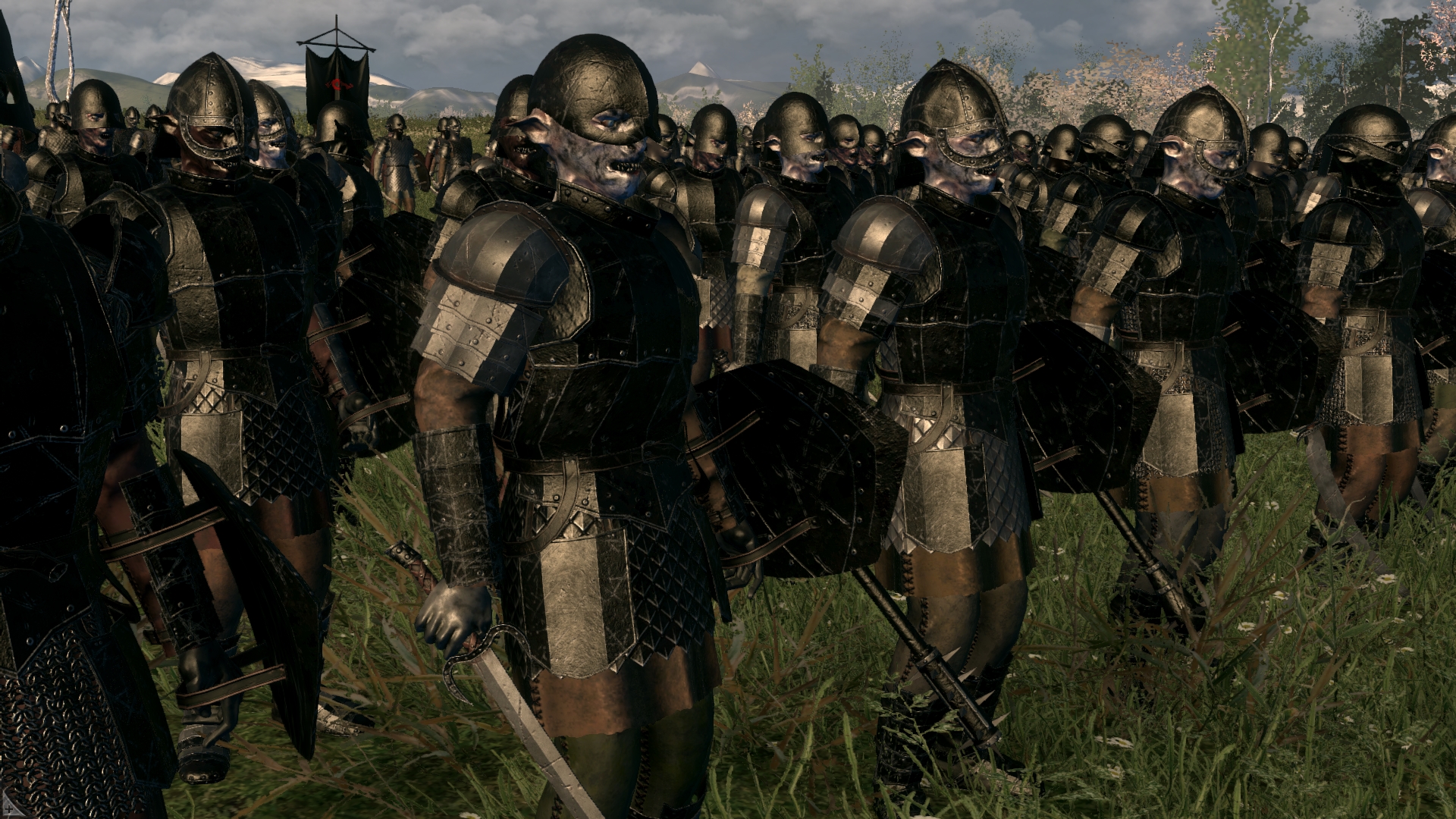 Despite some problems with the mod in the first half of the year I finally started working on it in September and before the end of November you could lead hordes of orcs to conquer Middle-earth.
At the head of these hordes stand Sauron (also known at the time as Annatar), having at his service the Nine Nazgûls, fallen rulers of men, enslaved to the will of the One Ring. The forces of Mordor are supported by depraved Black Numenoreans who years ago, along with three Numenorean lords, were tempted by promises of power. 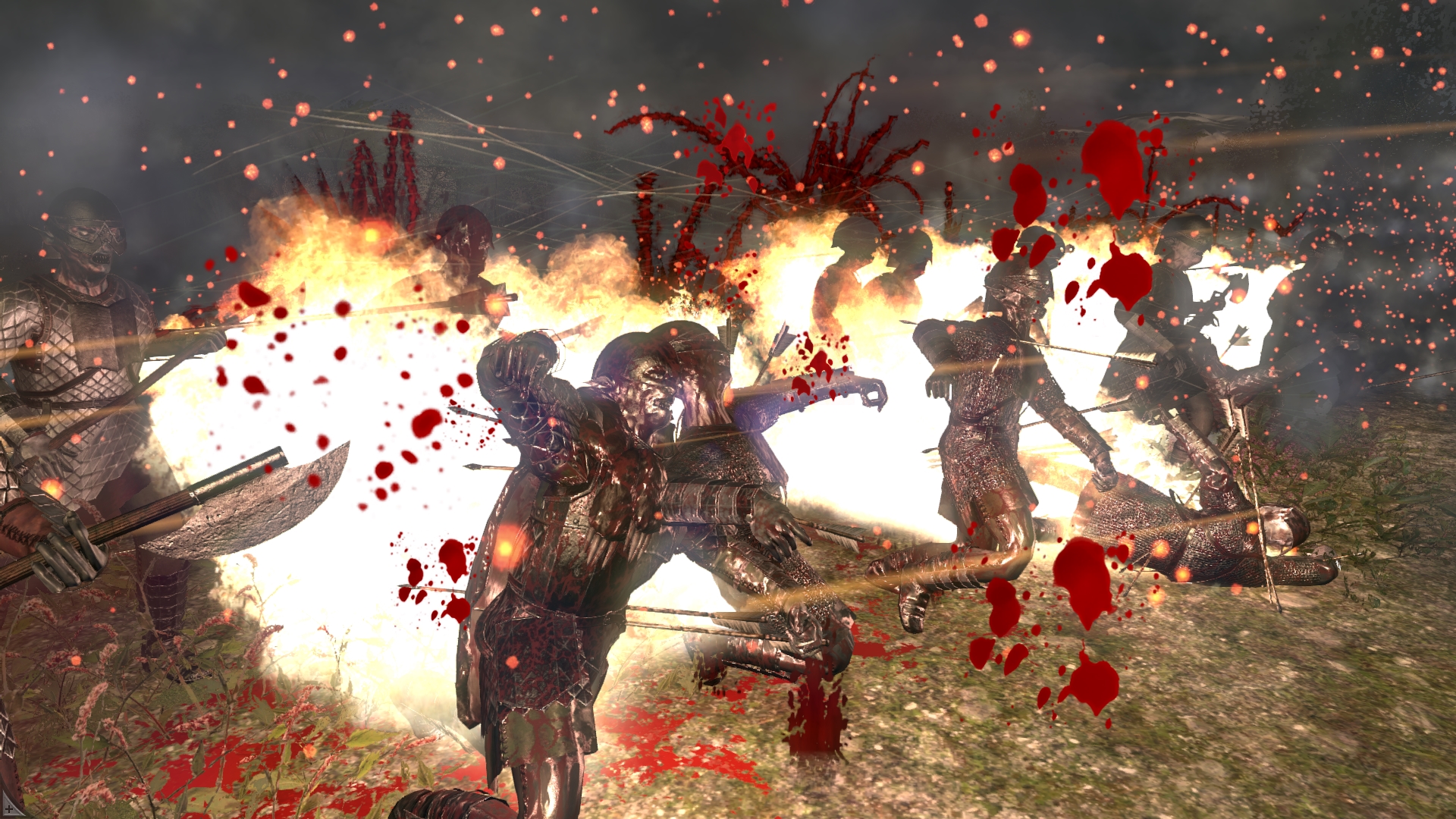 For now, the orc army is only the basis for the planned content, but it is already enough to burn Middle-earth.

Okay, let us be honest. Previously, building effects were very simple which led to managing our territories being... boring. This year we decided to change that and started work on rebuilding the effects of the buildings. We have added many new effects for existing buildings (such as food consumption or dirt caused by industrial buildings).
And even if it is still not finished I think the gameplay now is much more interesting and enjoyable. I hope we can improve it even more in the future.

The building cards have also been improved. In previous versions some of them were made by Vain and Mareon (Númenor), some were borrowed from Finix working on MK 1212 (Harad) and some were made by me (Lindon)... and some were missing altogether. It was inconsistent in style and unreadable on top of that. Since I'm not very good at drawing buildings at the moment, I've decided to introduce simpler building cards, which will still be legible and still pretty, and most of all I'll be able to prepare them fairly quickly.

In addition, several other changes have been carried out. For example, Numenor finally got a military technology tree and several improvements have been made to existing technology trees. I've also decided to add more trade goods like fish, beer or elven instruments (which required changes in the interface code). 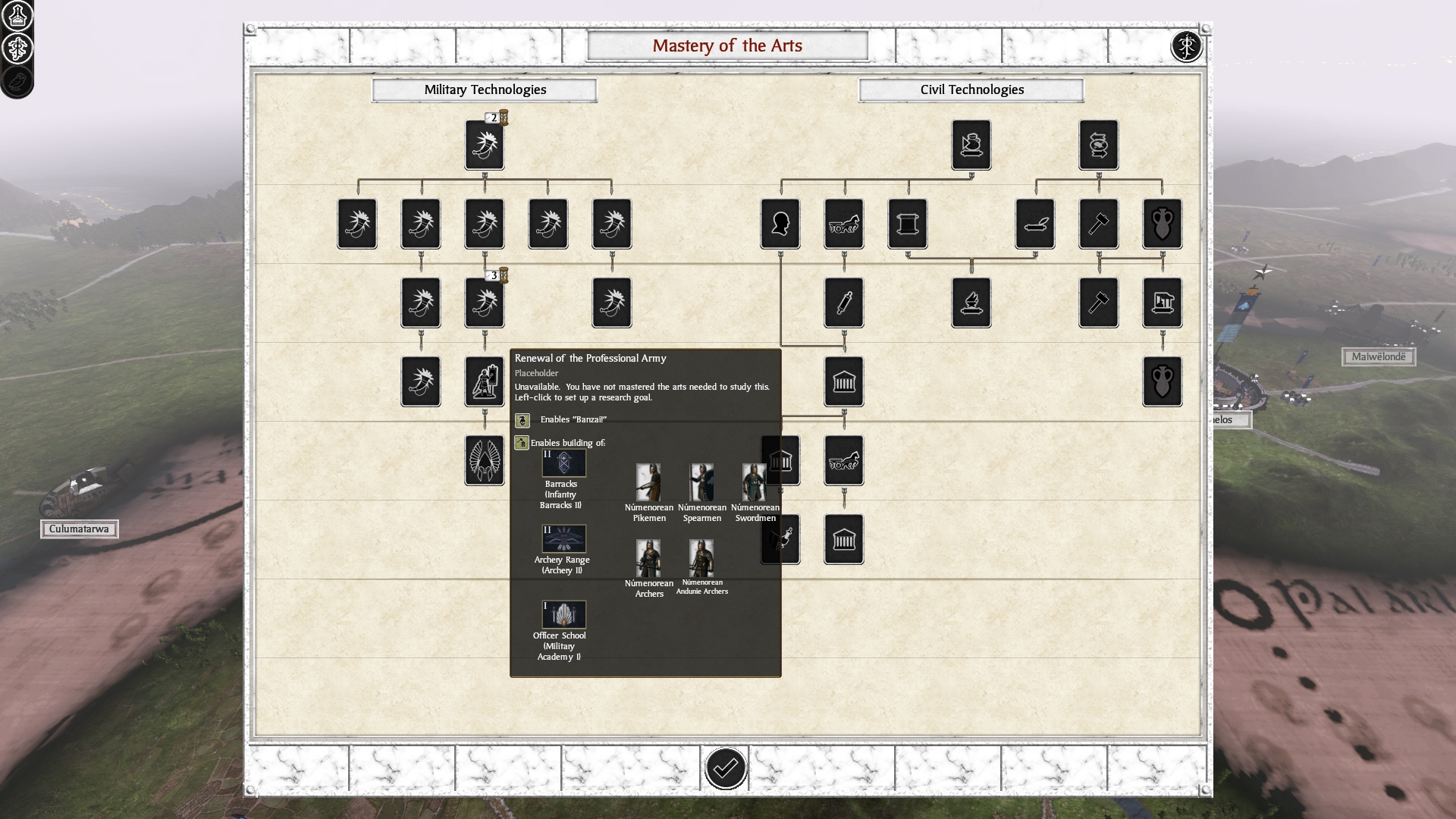 Since version 0.1.5 I have been getting occasional requests to move Numenor closer to Middle-earth. I was against it because I wanted to keep the map as lore-friendly as possible. However, I finally decided to do so because of a bug in the Shogun engine causing the game to not render settlement models if they were too far from the centre of the map. And even though this area of "visible settlements" is still much larger than, say, the Rome II campaign map, I decided there was no point in wasting so much space on the sea. 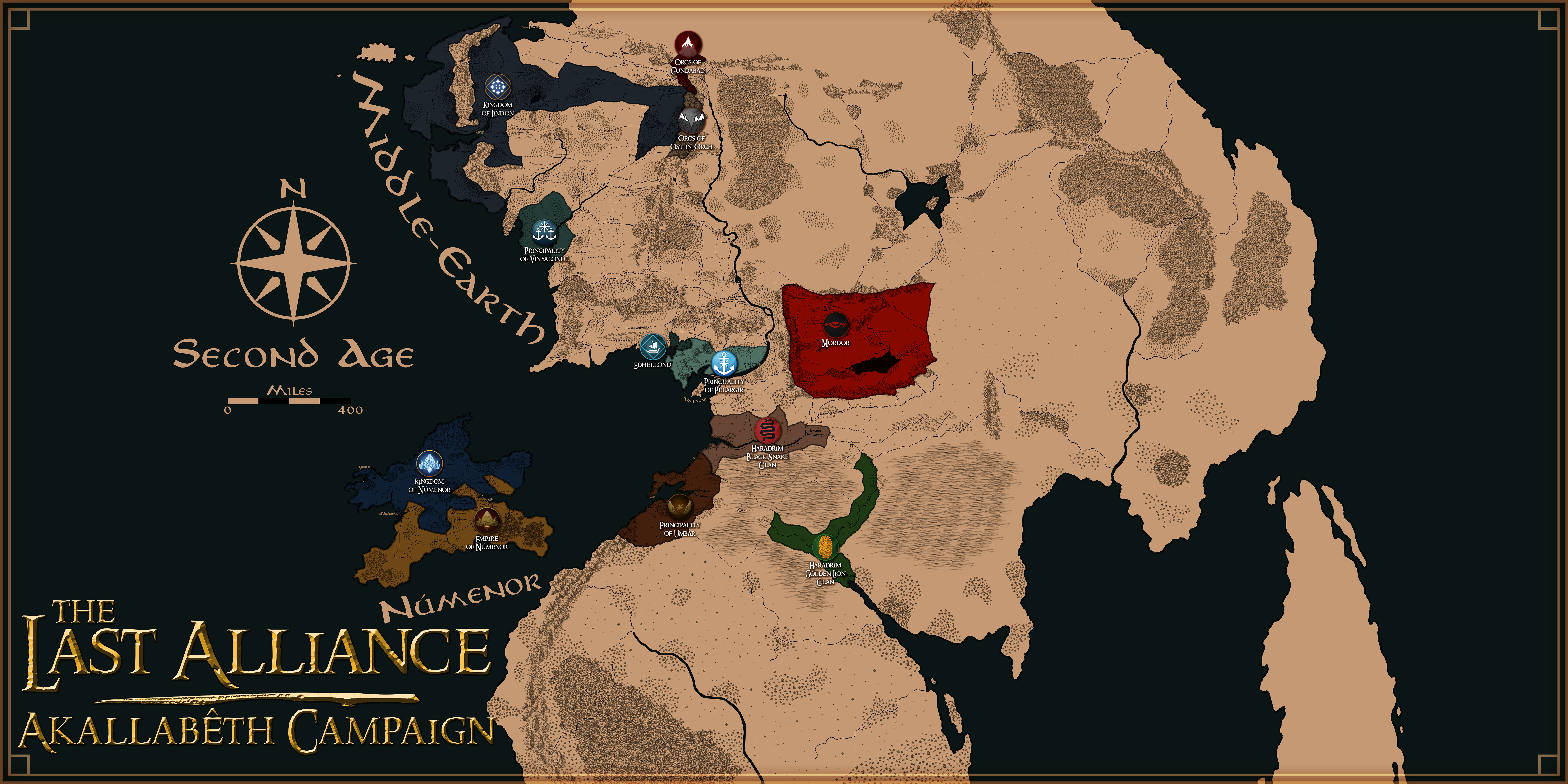 So in version 0.2.5 Numenor has been moved much closer to Middle-earth. In addition I made some other changes as well, added some new settlements in Gondor and Harad, and improved the visual side of the map so it looks much better than before. 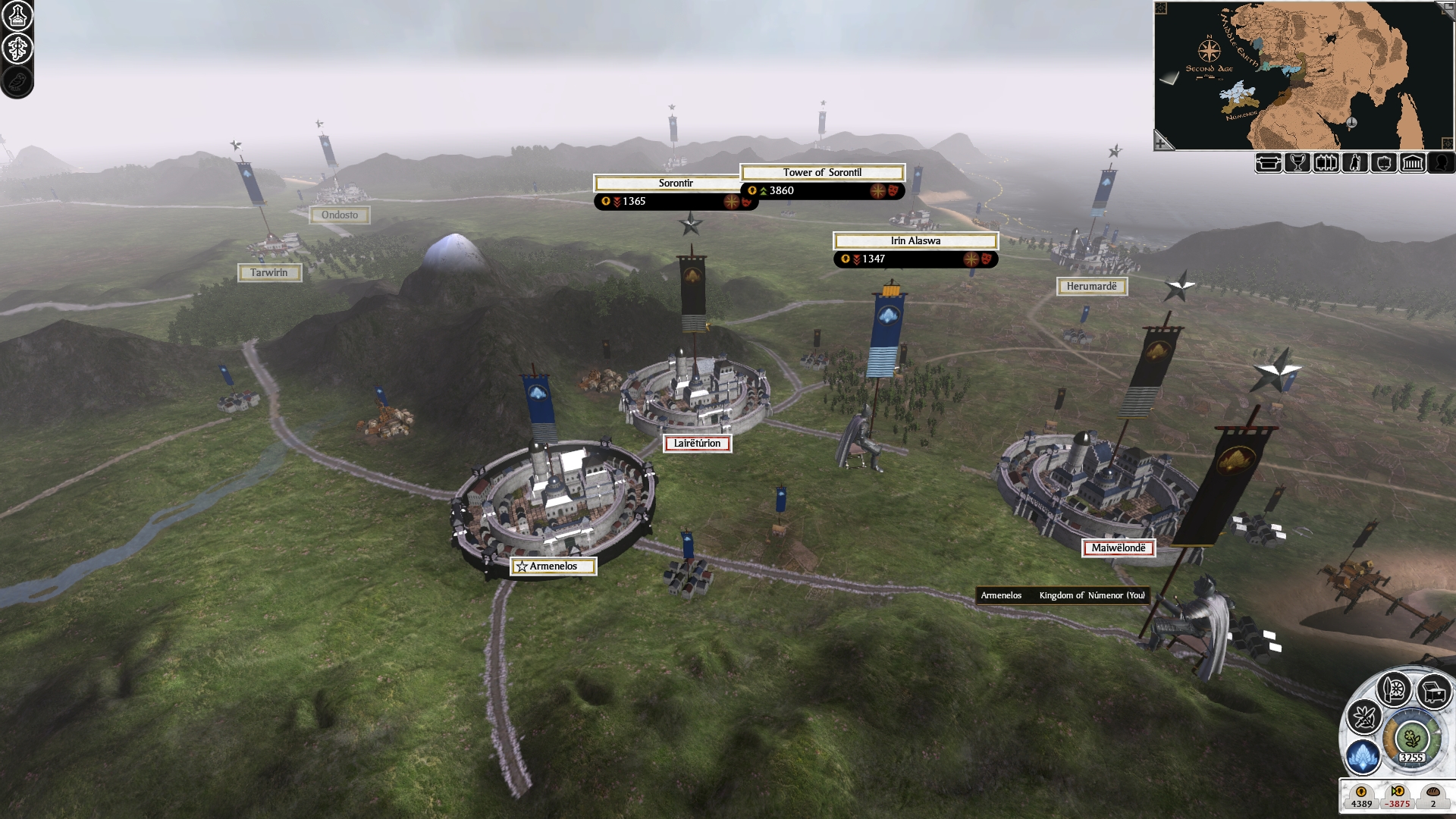 Of course, new lands have also been added along with new factions. The campaign map has been expanded to include Mordor, Angmar and the Misty Mountains.

Currently I'm working on introducing dwarves from Khazad-Dûm into the mod. Of course you can also expect more gameplay improvements and more content for existing factions. For example in the upcoming patch we want to rebalance Harad units, which are currently too far away from other factions which makes them unplayable in multiplayer. 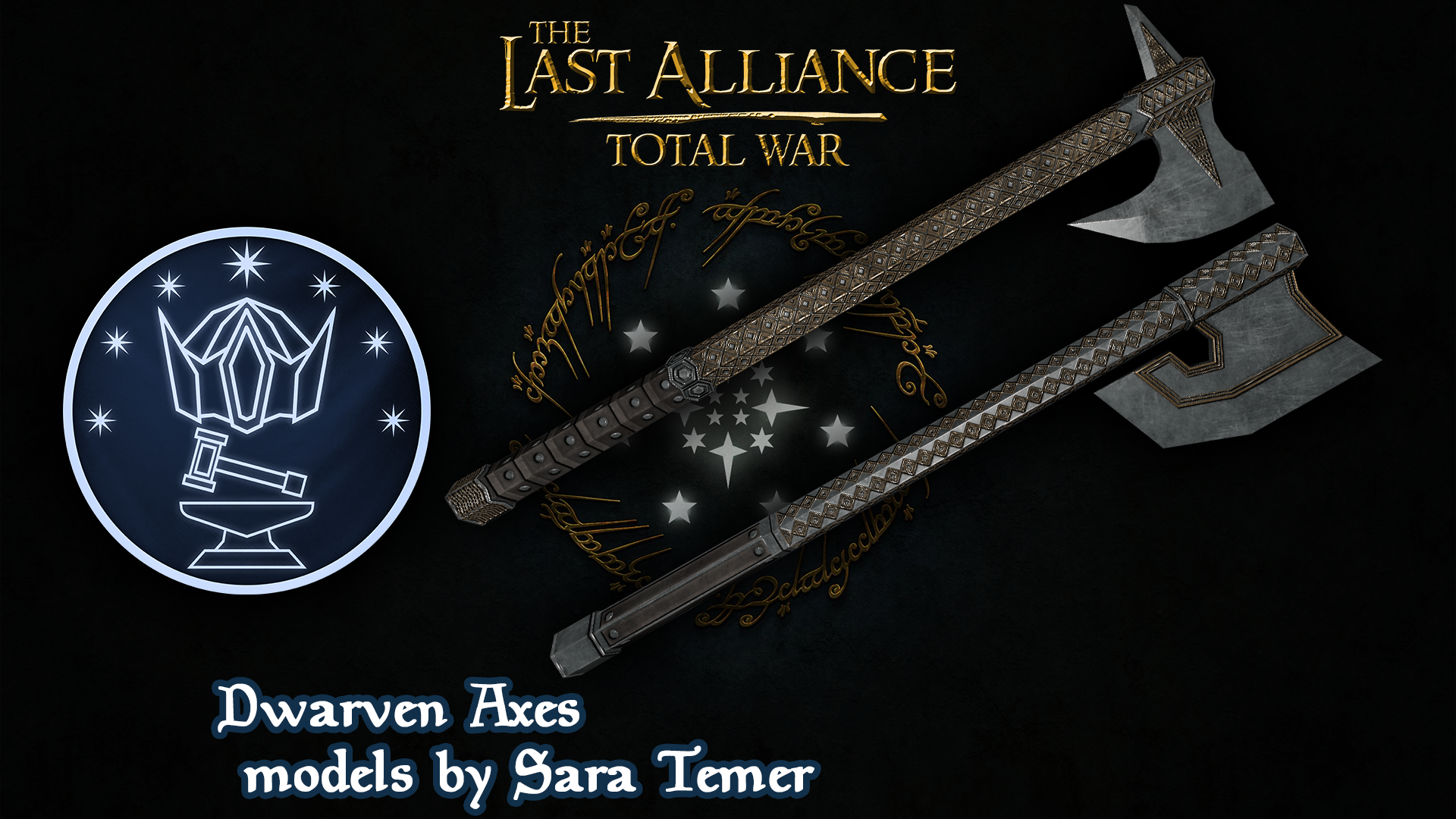 Anyway, I hope you enjoy the changes made over the course of this year at Last Alliance, and I hope next year brings even more progress.
See you next time!

Small hotfix for Alpha v0.2.5 - Read more to see information about this patch.

Orcs crawled out of their dens. The King of Kings begins his conquest of Middle-Earth. Read more to see informations about this version ^^

Hotfix for Alpha v0.2.1 - Read more to see information about this patch.

Important hotfix for Alpha v0.2.1 - Read more to see information about this patch

Any updates on whether the original Japanese castles / temples / settlements (battle maps) can be changed? For immersion. I know that it's time-consuming if at all doable, but maybe it would be something worth focusing on? Sadly, I can't mod at all, otherwise I would love to give it a try.

Okay, let's see how many things is in order to add to mod, next let's see how large is development team. And now tell me where I can find time to work on damn siege maps?
Even now often I'm working literaly whole days almost without rest to prepare next patches and you demand from me to find time to additional work? Really?

Playing as the Kingdom of Numenor:

I have the same problem here its siege battles for me, location is numeros and the settlements you start off as umbar

Numeros? Okay, I will check this settlement

Siege Battle? Land battle? Which place? You know, your description of problem says completely nothing.

when I ended the turn, it was AI turned and they started the move and attack a few of the cities(not just one place). it showed AI sieging your cities, and I was completely outnumbered so I want to do "fight the battle on the battlefield". After I clicked on it, it started loading and then crashed in the middle of it.

Sorry, I hope this is helpful?

Isn't, because still you didn't say name of city/cities on which you had crash xD

The first happened was at Laireturion, and then again at Herumarde after that.

this is the same me. I was forced to sign up to make more comments lol.

Anyway, I just want to say thank you and sorry for being a pain in the butt since this is my first time reporting and new in this mod. BUT, this is a great mod tho I absolutely love everything about this.

A brave team modding the best engine that CA has ever produced! Already making strifes with working shields and other assets previously tought imposible to be modded into Shogun 2! Keep going Last Alliance team!