This is my version of Ultimate mod, with for now overall fixed version that i can assure you works with the 3.04 version. Along with some edited and modified features such as new countries, fixed country flags, governments and several small modified and added decisions also events. The contents in this mod is heavily borrowed from other mods, notably HPM, HFM, CWE, CoE, AoE, NWO, several Ultimate mod sub-mods, etc. So if you're the creator of these mods, let me tell you that the credits belong to you as well. This mod is the solution if you ever feel so unlucky that every Ultimate mod isn't working too well for you :) 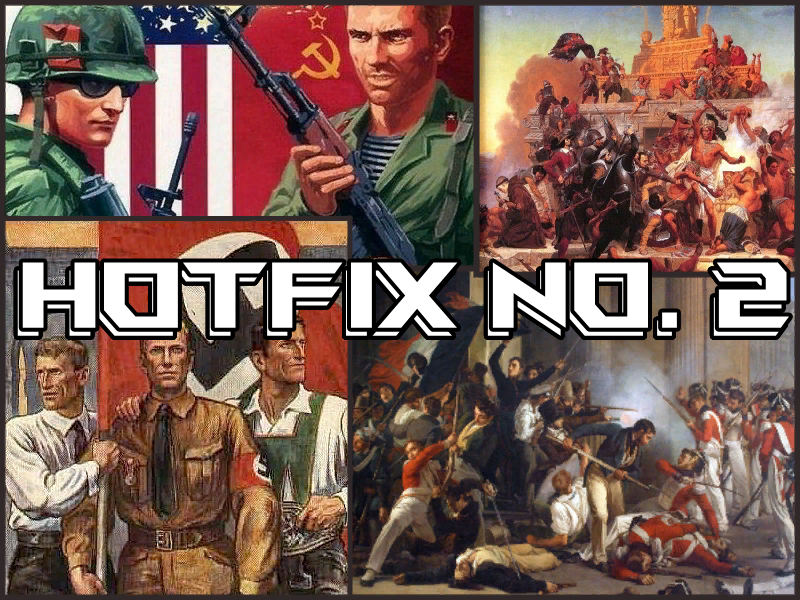 Alright New Hotfix out, just to save time i'll just post only the notable changelog here. Rest of it can be found in the description for Hotfix 0.8 No.2.

I can't promise much about the crashes nor the remaining buggy flavour events and decisions that are still there, most of it are leftovers from the original Ultimate mod, and its quite tiresome checking and then applying correct fixes to each of it but i have plans after this to keep updating the 0.8 version with hotfix and patches until i get a satisfying stable release and from there release a new version.

Parts of the difficulties is that i currently haven't made a developer build for the mod either on Github so its quite tiresome to update things and then add it in some small incremental package. And parts of the reason why the following changelog won't be as detailed considering i forgot some of the changes i made over the course of months i've been working on it so pardon me. If you have reports please also sent me the save files of your campaign it can help me identify and fix the problems quicker.

I still need feedbacks so i said it again if you want to report problems please also sent me the save files. i can identify the problems much quicker if you do so.

Possible update for the mod with more possibilities for more features

Ultimate Ultimatum mod is my version of Ultimate mod that try to resurrect the mod and giving hope to people who miss to play it or struggled to install...

Hotfix Ultimate Ultimatum for 0.8 No.2

Hotfix Ultimate Ultimatum for 0.8 No.1

Hotfixes and small patches include more localizations and several decisions fixes for 0.8

This file fixes the teutonic heritage (brandenburg_prussia3) event so that you won't lose the game anymore when clicking the third descision in the Brandenburg...

Ultimate Ultimatum version 0.8, extract and copy the files to the mod folder in Victoria 2. This is a pretty big update, so previous version must be uninstalled...

This is the file for Ultimate Ultimatum mod, copy it to the mod folder in Victoria 2.

Guys, I need some help
I am playing as the Soviet Union, started into the inter war period and I am currently at the 60s. Evertime, the game just start the "soviet chaw" event and I turn into a democracy, instantaneously. And this is ******* me off, because it is part of my strategy to continue as the soviet union and use the install communism war justification, everytime this happens I use the event 60000 cheat to go back to a communist dictatorship, but a minute later, the democracy event happens again. Anyone would know how to stop this event from happening? I would be so grateful

It used to work fine, but now that I've reinstalled it, I can't get past the 20th of November 1619. I tried switching nations, checking the logs, but nothing has helped me solve this issue. I got around it by using the console to go straight to the 21st of November, hopefully nothing broke
Still love the mod, apart from that !

This is the reason why i never played this amazing mod. To much users talk about this bug, and i don't want to invest 10hours and than have a bug, where i can no longer play.

This bug has existed in the Ultimate mod for absolutely ages, ever since it's first release and it's been carried over into EVERY, SINGLE, REMAKE of the mod. I've probably spent more hours trying to find that bug than I have sleeping. It only happens some games, usually around 1630s, but it can happen seemingly at any point before the original start date of 1830s. Latest it has happened for me is like 1740s.

Damn that sucks, I really wanted to do a game that would last longer than vanilla, but at least I know it's something that probably won't be solved, thanks !

A well needed update to a Victoria classic, But I think a few things are still missing, first of all, why can't all of the Thirteen Colonies different colonies be playable, second off, some scenarios do not have releasable colonies, Like Spain can't release Mexico or France can't release Quebec, Heck many former colonies in the Americas and Oceania are not playable. But these are fixable.

Napoleon Agrees the the Frankfurt Proposals Victoria 2: Heart of Darkness