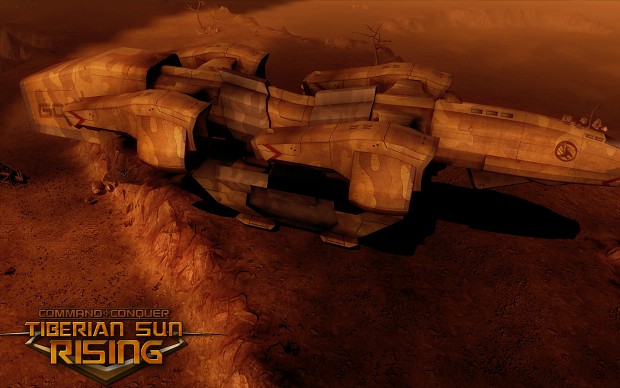 I liked the scale, this one actually looks it can carry a sizable force.

The comment below is not? get your facts strait.

there's no words for it, the dropship is sooo cool! and the scale is magnificent!

Words are not enough...

I can't bellive that this mod for TW

Global Peace will Prevail with this Baby!

That's some cool work right there!

please tell us that we can use this baby!
PLEASE!
I cannot wait to build such a thing, fill it with titans and drop it off near an enemy Nod base unsuspected

Would it really be 'unsuspected'? hahaha I could see that thing coming a mile away... Just saying. :)

Actually because this aircraft fly's so high *always imagined this thing Stratosphere capable* it allows it to travel anywhere in the world in very very short times *compared to traditional air travel*. And also landing/falling from that high up straight down. Which is what makes this a very effective unit for dropping a small army anywhere in the world but allow's GDI a rapid response to any global situation.

To the ground force's it'd just be this massive Shadow that suddenly appears seemingly out of nowhere, you look up and there's your Dropship.

So can you put units in the dropship, then send it up and call upon it when in need?

I especially like the texture/camouflage...hope it might find its way onto other GDI units at some point ^^

Well reason why this asset is clearly the best looking GDI Asset.

Is its one of the few GDI Asset's designed/created for the C&C3 version of Tiberian Sun Rising. Much of GDI was ported over from the Generals build, alot of Nod was created for the C&C3 build only some ported from Generals (Devils Tongue). Same goes for the Jumpjet Trooper he was made for C&C3 TSR hence he looks awesomer :) then our older infantry assets.

Once the remaining Asset's are completed we'll revisit older ones and give them a revamp :). But any revamps wont hold back a release they'll be incremental patch's most likely after release. Unless we have time before release while finishing Nod & Tiberium.

epic is not enough to describe this

I noticed something on the Animation: In Tiberian Sun, the engines tilt down 90 degrees, like those on an Osprey, while here they only tilt a little :/

Yeah, this is simply because the design doesn't actually allow tilting the engines very far - while this isn't much of a problem in the low-res TS-Voxel, it is quite noticeable on our 3D model.
In TSR, the Dropship not only has the main engines, it also has countless maneuvering thrusters integrated into its hull. If you look at the descending animation you might notice that the entire body tilts backwards - this is because it is using its nose-mounted thrusters to lessen the momentum. Truth be told, we simply don't have an awesome'ish looking PFX yet for the thrusters.

true, still, I'd make the engines tilt just a bit more, it looks weird with those huge engines facing directly backward, and it actually slowing down.

lol i first saw this picture i thought wat a retarded building...then..O________O

This better not have a Cheesy OX-35 transport voice. . . it needs something more epic. :P

Awesome! This is huge!

What size is your texture map?

2048X2048, due to there only being One on map at any one time per player. *Assuming 8 players all played GDI and landed a Dropship at sametime*. This wouldn't likely affect performance much. I think this and possibly the crashed Scrin Ship in the campaign be only things I can think of off the top of my head that will have a 2048 map in TS Rising.

We'll do further testing to make sure, but runs beautifully so far even on a low end machine I tested on.

2048x2048 textures work just nicely, I tried it several times. The Specular map and Normal-map could be cut down to 1024x1024 without affecting the visual quality significantly.

Fair point - I have found that EA's texture maps are far to small anyways, and that 1024x1024 for buildings and 512x512 for vehicles works much nicer.

this is stunning view!! and the previous too!!