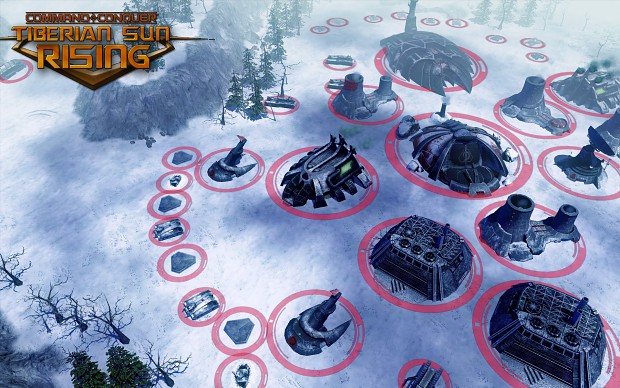 That's just an 'outpost'?
I'd love to see what passes for a base.

Hah! Me also! Who heard of Outposts having TON's :P

Well mabye not an Outpost I was just trying to think of a name for a Screenshot I hadn't used yet ok! :)

Are you going to redo or make your own maps to fit the TS type maps, Because I would love if you did the map cityscape from Firestorm, or the night of the mutants map.

It looks very cool. But a question: Are those "rings" always present even if you dont select said unit or structure? Because if you ask me, I'll be honest: It looks horrible.

Yeah I'm not really a fan either, however I think that's what goes for remap in this mod so I guess it will always be present. I'd much rather just have the house colour in the units/structures TBH... maybe in a more original way like using flags or lights instead of just plain colour.

Needs to be more transperant, or do you want the ability to turn it on/off or do you think it should only show for selected/mouseover objects? Let us know, the idea behind it though is an Augmented Reality Interface (ARI) which EVA and CABAL render onto the battlefield view. Infact Nod and GDI will have their own unique ARI (depending on who you are playing as). For the moment they are the same but that will be changing soon. Also ARI will provide other useful info which we haven't gotten to implementing yet.

They look good, but I'd say maybe 10-20% more transparency would be nice.

Im not sure how much control you have over the rings, but if there is a way to make them show for units all the time, but only show for structures (that you own) when you roll over/select them, that would be cool IMO.

But if you manage to make the ability to toggle them on/off then that would solve any problems anyone has with them i think.

I think you should make buildings only show it when selected or if possible when the mouse cursor is over them, while units should have it all the time

how would u know if someone captured one of your buildings? *would defiantly need some sort of indicator upon capture if rings on structures arn't always on.

I think it would be fine with a high transparency when not selected... if you can please put up a pick to show how transparency would look... it would make it easier for people to decide whats best...

my kingdom for some orca bombers!

I always loved the shape of those factories.

The Brotherhood of Nod has been venturing further out of their normal region's recently. GDI will need to respond to this growing threat.