The Wheels of Lull 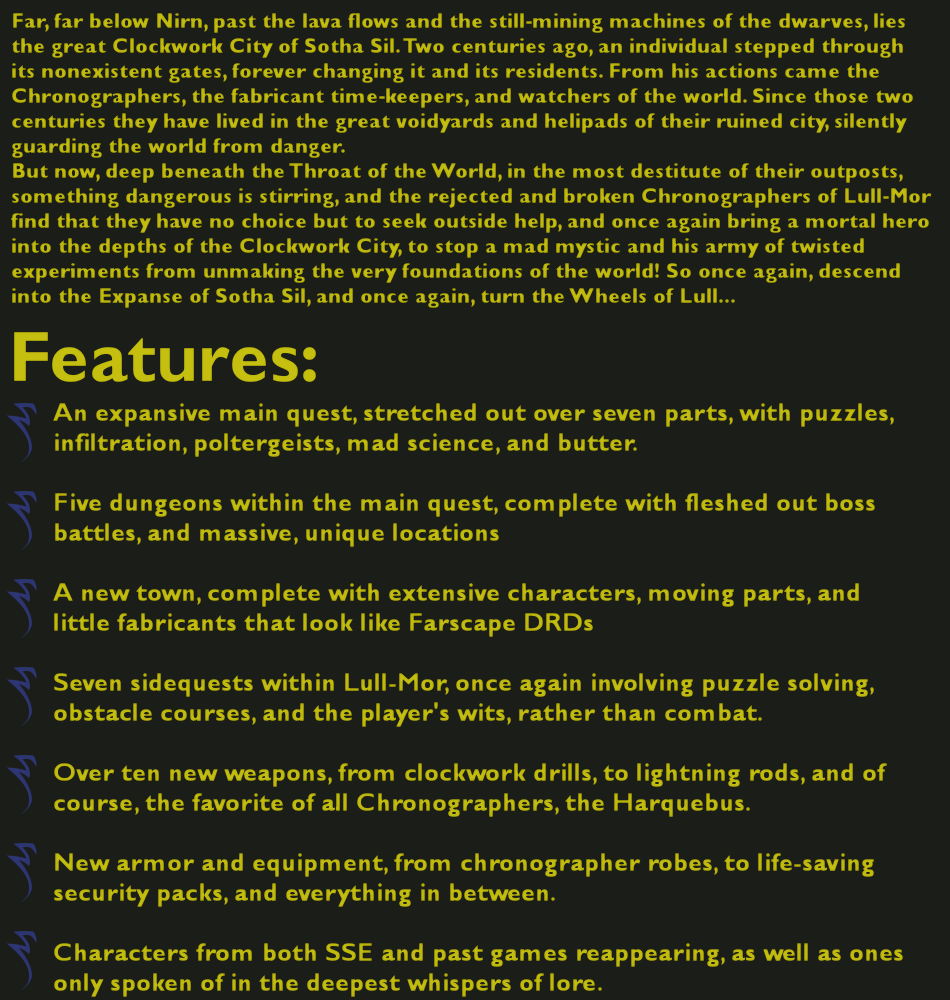 Thanks for voting and helping The Wheels of Lull on it's quest to become the 2021 Mod of the Year. You are now in with a chance to score some free games from our #modlove collection. Help this mod secure more votes by embedding the widget (or link) we have included below on your favorite sites.

Wheels of Lull: The final stretch

We're almost there folks! Just moments ago, Wheels of Lull's main quest was finalized and scripted. What does this mean? Well, it means while it's not polished, it certainly is playable. There's still much to be done though! WoL doesn't just have a main quest, but a nice multitude of in-depth sidequests, which will take you both into the workings of the Clockwork City, and to places like the depths of the oceans.
In the next few days, we'll be doing the following:
-Scripting sidequests
-Polishing sidequests
-Polishing the main quest
-Debugging and tweaking all these aspects
-Releasing to testers
-Integrating voice files.

Ideally we'd like to get it out next month, which may certainly happen. Then again, it might not. Time is funny that way.

Our voice cast for Wheels of Lull has now been chosen!

So you're probably wondering where this project is at right now, and where it's going. Well, let me inform you. With words.

Patch 2.0 is out! Some of this changes behaviors of scripts, I'd recommend to the people who did have obvious issues to probably reinstall. I couldn't...

A walkthrough for Wheels of Lull's main quest. This doesn't cover sidequests, but does give an overview of Lull-Mor.

This fixes issues if you're one of the people who keep getting caught in Numinar's barrier. Though if this is happening, you have much bigger problems.

The patch only version of Wheels of Lull 1.2, encompasses all previous patches as well.

Fixes multiple bugs and typos, as well as the issues with the chronographer robes + the harquebuses

A patch only version of 1.11, which fixes the Rod of Ohm flying off into oblivion.

So.... I accidentally disabled the boss dude in the foundry when I was about to fight him,(Was trying to get my stupid follower out of the way, since I was extremely tired with her)and now I can't get it back and I think it kind of broke the quest line for me. Is there anything I can do with out starting over?

the lullian shield doesn't do it's epicness for me, after bashing masscroft for thousands of times everytime only falling back an inch, I only once made him go ballistic, the same goes for the guards and the golem, is there a way to fix this? Love the rest of the mod though, dialogue, plot and the amount of custom meshes that all fit in perfectly is amazing!

Try power bashing (done by holding down the bash button)

Thanks a lot for this mod.

What is the "washermer"? For translate.

Duh, it's a portmanteau of the words washerman + mer

How to defeat masscroft ?help me please !

Instead of posting this on every possible site, why not be patient?

Because I try for two days all possible technique to kill Masscroft, but nothing works

Single Player
Tags
Embed Buttons
Link to The Wheels of Lull by selecting a button and using the embed code provided more...