Gordon Freeman was transported moments after his "interview" near one of the lost research facilities within Black Mesa.

An unknown faction have seized the area with the scientists taken hostage. No negotiations have take place, and the Military themselves are getting desperate to the point of planning an airstrike to destroy the building in its entirety.

What seems to be a random terrorist attack may mark the start of a horrifying journey beyond time and space.

Remod is a mod for The Timeline Trilogy that tries to bring :

Remod already includes the Timeline files, so you don't need to need to install the older version, just install this one on your HL installation and you're good to go!

Installation is simple, simply extract all 3 folders that is inside the .7z into your Half-Life installation folder (Where hl.exe is located, NOT inside any of the other folder such as "valve" or "valve_hd")"

There should now be "valve" and "timeline", "timeline2", and "darkness" inside you Half-Life installation folder along with any other mod/steam-related folders you may have inside.

Restart Steam, all of the Timeline Remod entries should be inside the Games list.

If that doesn't work somehow, create a shortcut of hl.exe, open it's Properties, add " -game timeline" to the end of the target bar.

Example would be "C:\Program Files\Steam\steamapps\common\Half-Life\hl.exe -game timeline", changing them as you see fit.

Beyond Time and Computer Meltdowns

Well, here it is guys, a Remod done after the lighting bolt that actually did struck my old computer, basically frying everything inside it. Thankfully, my dad came to the rescue and borrowed me his office computer, and now here we are, with another Remod.

Timeline is one of the mods that i play back in the day, and you can definitely imagine what it was like back then. Everyone was so busy going around Black Mesa and modern space sci-fi stuff when suddenly, BOOM!

Nazis and time travel got into the mix. 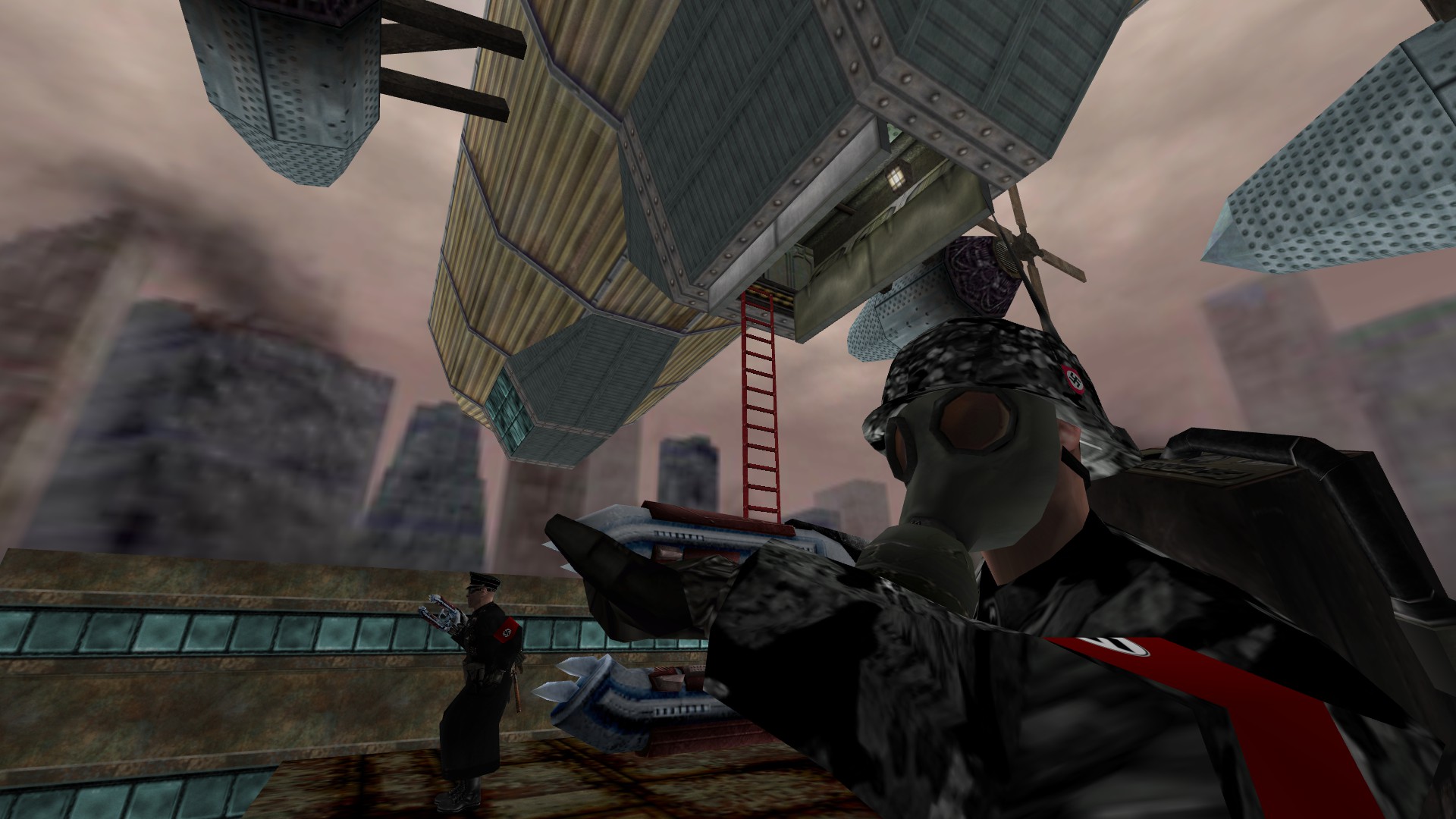 Just the premise itself already impressed me, time travelling Nazis screw up time around the Half-Life universe and it's up to our ol' Gordon and his trusty crowbar to put a wrench in their plans and screw over the Third Reich!

Of course, a premise isn't going to go well without a good execution, and Ross did deliver for a good bit. 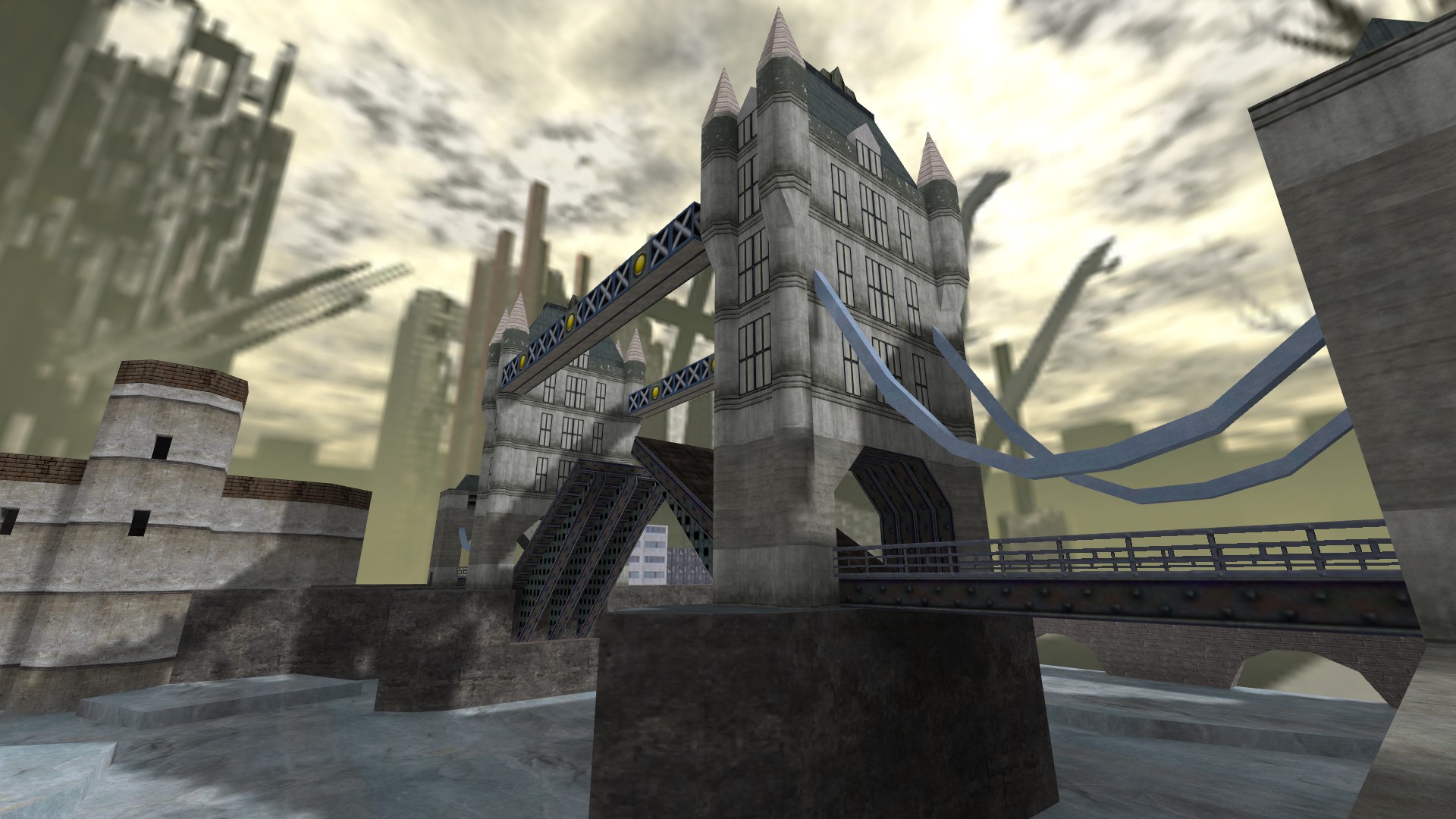 The set pieces were awesome and diverse, first you start in 1944, then Egypt, then Rome, then the Civil War, London during the Ice Age alternate timeline, and a lot more too after that. The Timeline series has moments that got me just wowing at the more worked on areas.

Combat was a bit tricky due to the limited supplies, the enemies were plenty, and your supplies aren't.
Playing the mod on Hard really tested my skills, and i even had to do other things to take out enemies with little loss on my side (the vehicles of T2/T3 comes to mind, and i actually succeeded in using TRIPMINES of all things to get rid of the Assassins).

The brushing is not too bad either, it even got better as the maps go on.

I'm glad too that Ross didn't just stick with one idea and overuse it, he used the time hub thing in the first part, have the second be going around an alternate snowy Ice Age-y timeline where everything's changed for the worst, and fused the two in the final part. 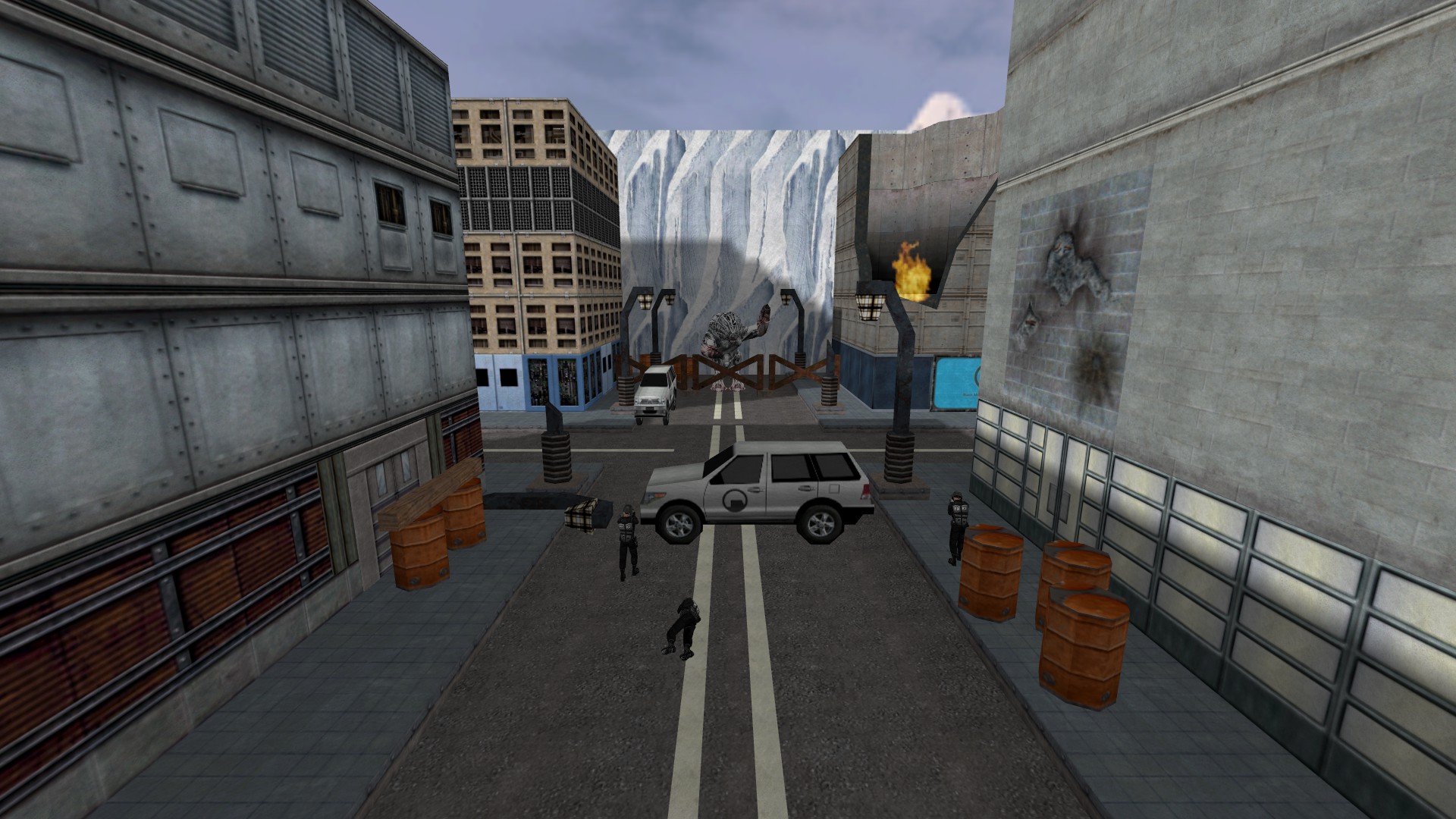 Though unfortunately, the mod is also flawed in some places.

Some of the level design can get a bit bland with the repeating long hallways/corridors, some parts were a bit silly (tanker surrounded by invisible walls in T3, anyone?), and the spinning thing in T1's final cutscene was horrible for my head.

The combat was fun, but at times it gets REALLY STUPID for some reason, too many HGrunt grenadiers at times and HOLY HELL the respawning enemy bits were numerous and frustrating as heck.

The way to go can get a bit confusing here and there, backtracking for keycards and switches that opens a door/area 10 miles away was not fun, and i ended consulting a walkthrough when i got stuck a couple of times, i won't blame you if you did either, a ceiling covered by an electrical wire or uncolored keycard/door hunting is not something i'd like to progress with.

And don't get me started on some of the "escort" missions, the one on T2's space ship was tedious due to how the scientist keep getting stopped by the level geometry and you had to go back and forth to get him on that damn escape capsule. 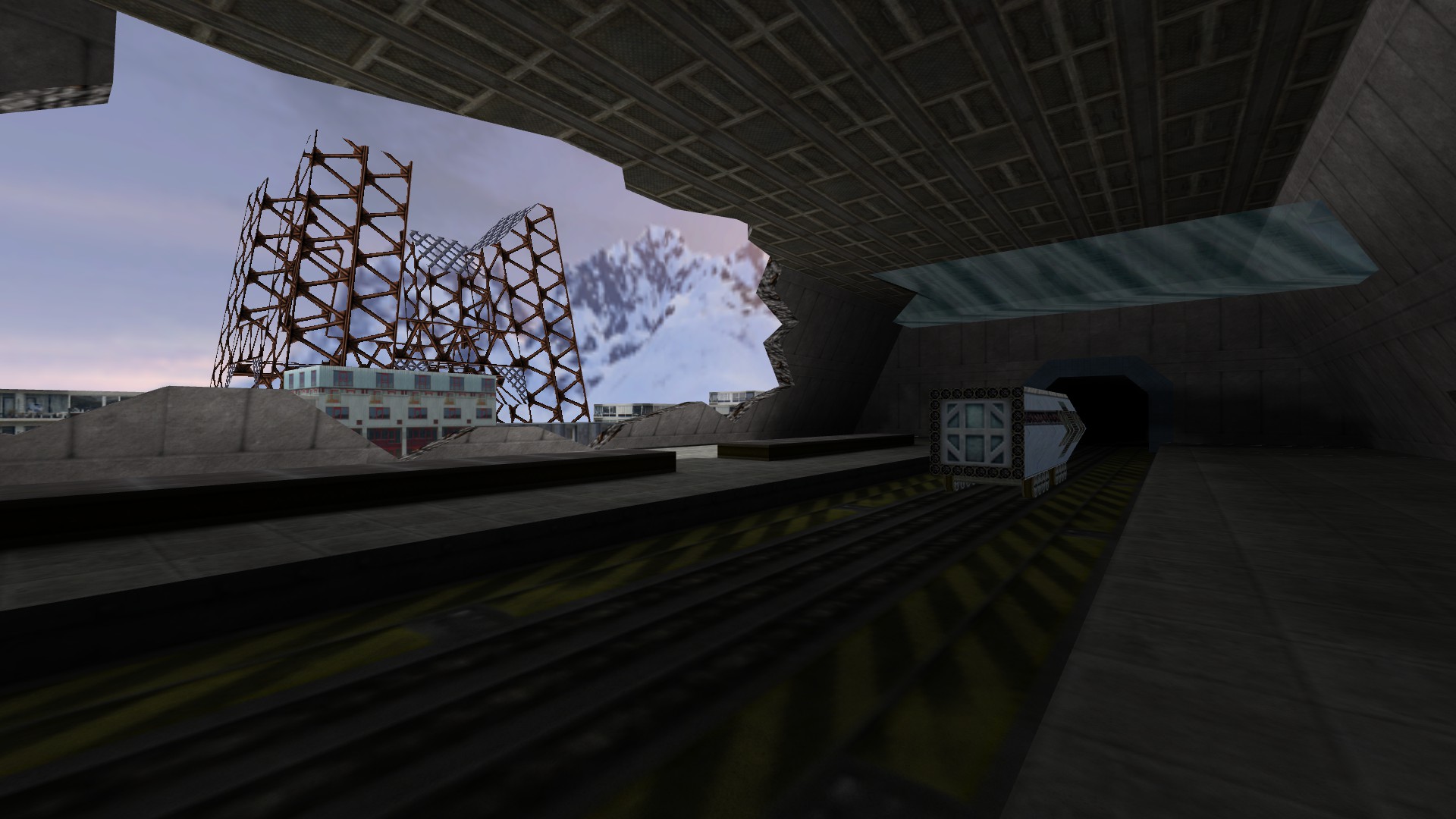 Thankfully, the positives outnumber the negatives, and i'm still pretty happy after finishing it (that ending was brilliant, btw).

So yeah, figured i'd do a Remod and add stuff that could work here and there.
Adding tiered-ish weapons for each one was the first thing i did, no more MP5SDs/SPASs for the entire series.
The Nazis now carry modernized WW2 weapons in T1, actual modern weapons in T2, and straight out futuristic doesn't-make-sense weapons in T3.

Barneys in T2 is replaced with cops (though everyone should ignore the final barney in T2 that turned into blue barney in T3, call it time paradox or secret agent disguise or something).

Added simple detail texturing for everything, sound alterations here and there, actual German sentences for the HGrunt lines, custom materials to make snow sound snowy, and a bit more things here and there.

Hopefully, you all can enjoy it as i have.

1.1c release of Timeline Remod. This Remod already includes the original files, so you don't have to install anything else. Enjoy!

A lot of people seems to be suffering some issues regarding custom coding, Which Timeline 1 and Timeline 2 does not have for compatibility reasons. Hopefully...

I remember that happening in the original mod too, on that exact same ramp. Initially it worked without any problem, then suddenly, it kept happening every time, and finally, it just stopped crashing forever. Now I understand why, it couldn't crash anymore since Valve got rid of D3D.

Maybe I don't understand, but this mod is boring. Bad level design too.

For whatever reason, timeline 2 won't start after I chose new game. The first and the third work fine.

Resolution is all messed up Nazi soldier models doesn't work. They look like LQ hl1 soldiers

Started part 2, but have run into an issue that has me stumped. Got well into it in my first session, but the next day the game refuses to open any of the save points in the 'load game' screen. No error message pops up, but nothing happens no matter how long I wait. So it looks like I will have to shelve this for now.

i was able to play this mod before but after the recent update for half life i can't launch it, my save didnt work, starting a new game doesn't work, it just crashes the game. idk what's going on or how to fix this

Hello, I'm sorry, this is a publication three years ago. but I have a problem with "TIME LINE 2" comes in and everything, but it stays stuck in the intro. with a black screen, I was playing "PROLOGO". I wanted to know if you know how to fix it?