Nihilanth's death may have stopped the portals from overwhelming Earth, but the battle on Black Mesa still continues.

The Xenians, the Black Mesa Personnel, and the Military continues their struggle for survival, each holding themselves out and fortifying their positions with whatever they can get.

Jennifer Freeman, once tasked to deliver important documents to important people, now finds herself being hunted down for the information she carries, the train she took now stranded in the middle of a warzone, the faint sound of an apache and an attack bomber getting louder and closer.

It'll take quite the skills to get out of this predicament, if nothing else, some real luck.


Remod is a HD mod for The Real that brings :

Remod already includes The Real, so you don't need to need to install the older version, just install this one on your HL installation and you're good to go!

Installation is simple, simply extract the real folder that is inside the .7z into your Half-Life installation folder (Where hl.exe is located, NOT inside any of the other folder such as "valve" or "valve_hd")"

There should now be a "real" folder inside you Half-Life installation folder along with any other mod/steam-related folders you may have inside.

Restart Steam, The Real | Remod should be inside the Games list.

Where do I start with this mod? 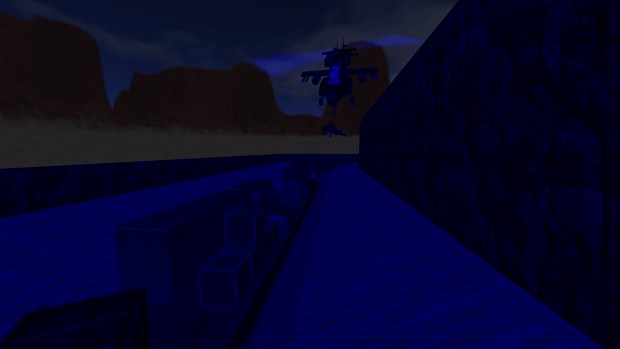 I think it's kinda obvious why I never finished this before when one takes a look at what the original did to the skill config files. Easy to say, whoever decided to make the headcrabs of all enemies instakill you must have been either a sadist or a masochist (headcrabs are a plenty in this mod, which adds to the pain), it doesn't help that the other enemies are given the same treatment as well, doing ridiculously high damage to you while you desperately pelt away with your pistol from far away hoping you don't get killed, and that's not mentioning the new enemies yet.

Perhaps some people find this fun, but I certainly didn't. 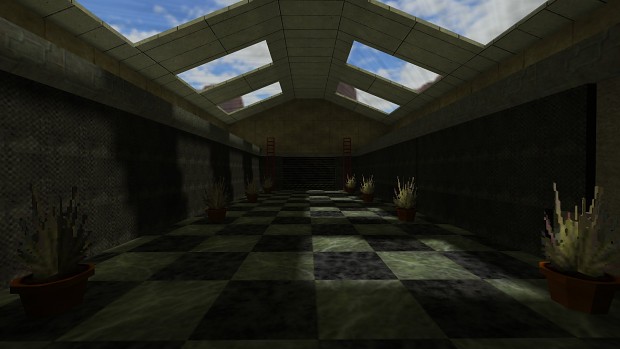 It doesn't help that the level design itself is not that great, about average overall, a lot of boxy areas here and there, there's the occasional broken geometries that can get you killed randomly (the fans in the vents of real02, for example), the tons of non-sensical ambushes that would've been unforgiving on the original difficulties, mandatory drops that require health, switches and breakables that are almost impossible to find (the switches in real27 and headcrab15).

What about that sudden car crash that is real12-13?
A map entirely made from non-imaginative boxy glass (could've used some abstract structures, but nope, just boxy glass) and another that forces you to fight invisible enemies.
Yes, invisible enemies that can instakill you.

No, sod off, The Real, I'm done playing with your broken configs, I straight out resetted them back to classic HL/OP4 settings when I cracked here and finally felt comfort fighting enemies again (somewhat).

The maps are kinda improved in the sequel, but the skill setting, nonsense ambushes, and invisible enemies are still there, so, sod off still. 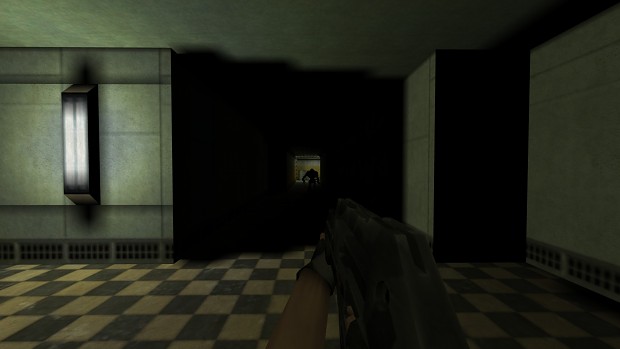 The story that the mod author tried to give was not at all intelligible, the broken grammar probably helped at some point.

There was no story at all in Real 1, aside from the usual escape from Black Mesa thing.

Real 2 though, was just stupid, when Real 2 started, we were just done with defeating the 4 gargantuas, saw a bunch of the new headcrabs, saw a guy getting killed by a headcrab, and that was it. There was absolutely nothing in the mod itself to indicate what's up with the whole headcrab-stuck-on-Earth-but-Xenians-mistake-for-prisoner-so-they-attack-humans "story", no scenes to set it up, no "translated" alien words that would say why, no ingame story-by-environment stuff, nothing.

Well, there's the text scroll in the end, but I think most people wouldn't even reach that or be too busy feeling relief from the massive pain this mod was to notice.

I guess I shouldn't be too hard on the "story", since I'm sure it's just nothing more than background stuff to explain what is basically a set of random maps, it does detract from the experience though when the thing said and the thing happening does not correlate with each other in the slightest aside from location names.

Even Doom made sense, and all they used was text dumps at the end of their episodes. 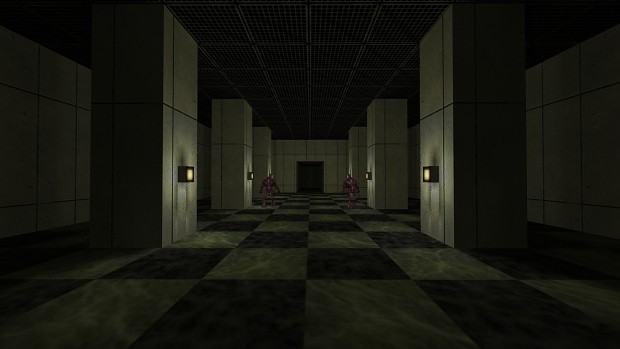 What about the new stuff?

Let me start with the bad, some of the new weapons introduced served to pretty much make your base weapons useless, the Fiveseven shoots as fast as the Glock's alt-fire while being as accurate as its prim-fire (also having double damage), the M4A1 and the P90 is better in every way to the MP5 if not for the grenade launcher, they all share ammo too, the Glock/Fiveseven/MP5/M4A1/P90 all share 9mm ammo, I might have accepted the new weapons being more powerful than the base weapons if they're using uncommon ammo, but nope, 9mms for all.

Same thing too for the snipers, turns the crossbow redundant, it's even funnier when the second sniper you get was made useless by the first when you know the damages for both (SG550 had 75 damage, M40A1 had 350), the firerate and ammo mag increase does not help the ridiculous accuracy and power drop.

I also need to mention the fact that the original author probably did not have the slightest bit of knowledge on how to modify the models outside of changing their textures in HLMV when making this mod, resulting in inconsistent hand meshes from OP4 hands/CS hands/Gunman hands.

Real 2's new weapons have their own little broken stuff as well (deagle not having separate reloading states), but they're kinda alright.
The quad shotgun idea is great to combat the new ridiculous headcrabs (catching those bastards midair with 4 point blank shells is always satisfying), the M41A is an odd choice, but acceptable, and the plasmagun itself (in the short time of one map that you use them) is a nice weapon to use. 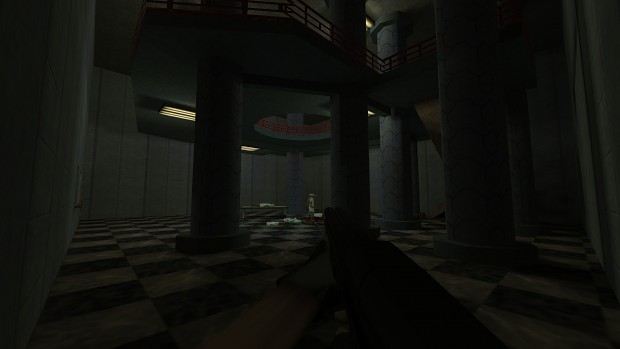 The new enemies? Yea, they're not fun to fight at all.

Let's start with the headcrabs, the new headcrabs you'll be seeing are headcrabs that turns so fast you can't catch them with a crowbar/knife without getting damaged yourself (their turning state probably got removed or something), all of them.

The freezing headcrabs and the zombie barneys blinds you when attacking, the blindness effects lasts WAY too long for comfort, and they blind you even when they're attacking something else, so if an NPC or a corpse stands in the way when they attack, even if they didn't get you, you'll still get blinded anyway, which is a death sentence when one of them sneaks up on you with the amount of time you spent flinging around that flimsy knife blindly.

There's also a new alien slave, that might as well be carrying a lightning minigun for how fast they can zap you, yes, even faster than normal slaves on Hard.
They also instakill you. Because of course the mod author is a psycho.

You know what's even funnier, the final boss, the Gonarch, is broken. She won't attack me at all, most likely caused by the level design since I tried playing c4a2 in the mod itself and it ran fine, I had to add respawning alien controllers there just to make it the slightest bit climactic. 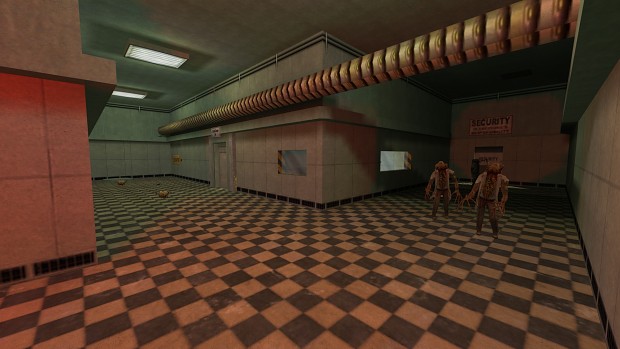 I tried my best in fixing things here and there, adding some things of my own.
To list them all here including their reasoning would probably just overbloat this article, and I think my little review of the mod already suffices for that purpose.

Hopefully with the remod, this mod can be more enjoyed than hated.
Thank you for reading.

1.0 release of The Real | Remod. This Remod already includes the original files, so you don't have to install anything else. Enjoy!