More info about features you can see here.

And don't forget check our other mods!

FAQ and what you need to do if mod doesn't work 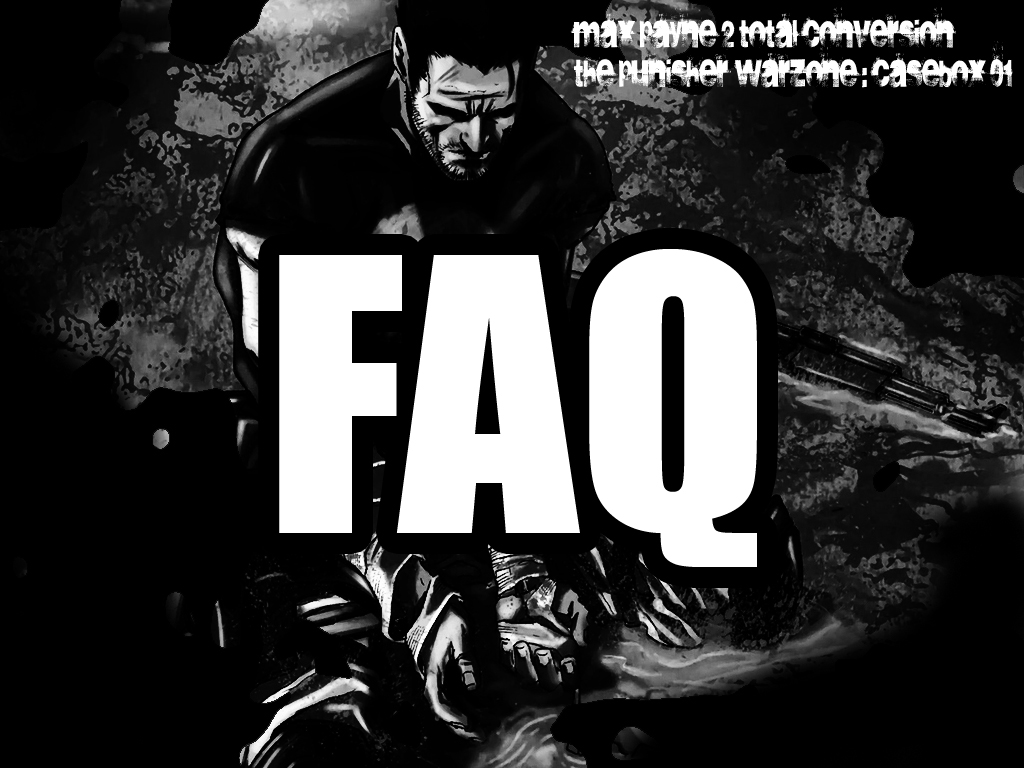 Be sure that your max payne 2 have no "data" folder. With data-folder mods just work incorrect or doesn't work at all. Or maybe your version (we can't see all local-versions of game) use anothe arhive names, thats why weapon patch works incorrect.

If you game have another ras-files or data-folder, just try to install original english-version of game (english steam-version works pretty good)

Or try to re-install Weapon Patch
If don't work even that, just delete "data\database'weapons" folder from MP2_Data.ras (use RasMaker2 to repack it)

Just set all graphic-options to maximum.

3) Only for mp2m version;
Exception in engineInit:HUDMode: Following subtitles are too wide (screen space limit 380)

Play with parametrs " -developer -developerkeys"
For steam-version it's looks like this: 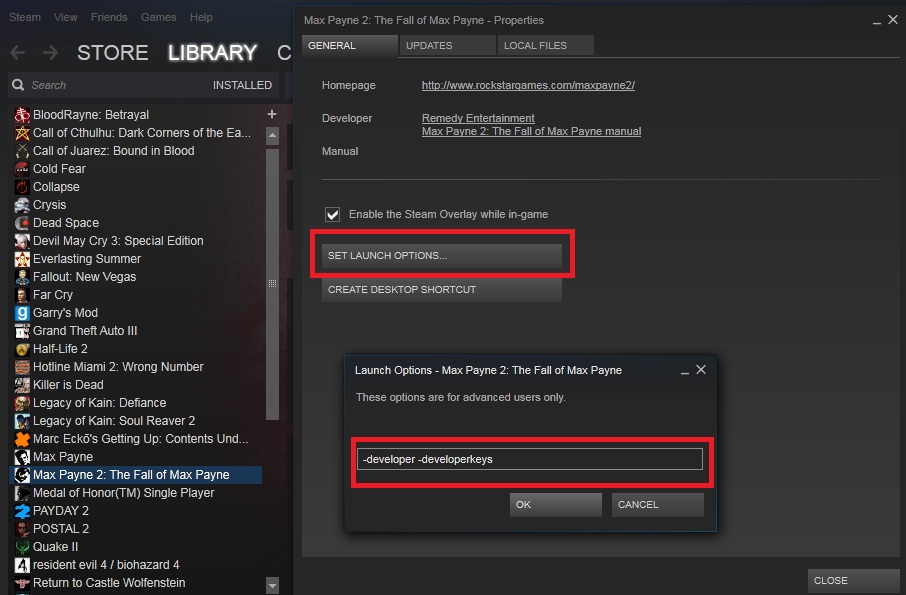 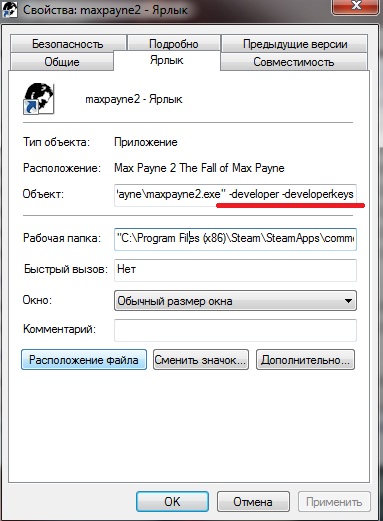 Info about new version of mod. Time to make some punishment.

The Punisher-WarZone: CaseBox 01 standalone version EXECUTIONER EDITION. No need to install original game to play this mod. Just unpack wherever you want...

The Punisher-WarZone: CaseBox 01 standalone version. It's not need install or original game. Just unpack wherever you want and run bat-file to play.

Punisher WarZone mod BETA, not release. If someone play it, comments please.

To the creator of the mod, you're a big hypocrite, the mod looks really promising on the screenshot but once in game this game is stripping everything good from max payne 2 and adds really dumb sh*t, you claim you won't give players an option to turn off the attrocious screen shake because of "realism", yet you add this huge crosshair in the middle of the screen and make enemies bullet sponges (same as the punisher), where's the realism? only where you want it to be? what's realistic about enemies taking 50 shotgun shells to the head (every mini-boss fight) or a huge guy struggling with a 9mm recoil? (also the fact almost every weapon can be shot as a full auto if you hold fire) let's not even talk about the music choices.

Only good thing about this mod is the big middle finger to cheaters.
And maybe the punisher playermodels, they're pretty well done but that's where the upsides of this mod end.

You need to lower your ego buddy, not everyone has to play the game in the exact way you want them to (not talkin about cheaters tho)

>>You need to lower your ego buddy, not everyone has to play the game in the exact way you want them to

Nice logic (not really). It's like to say to Remedy "Sam Lake, you need to lower your ego buddy, not everyone has to play the game in the exact way you want them to".

Why not? You're just saying stupid things just because you're a casual player which can't defeat enemies on higher difficulty levels than "Press LMB to win" as I can see while reading your text.

BTW: "also the fact almost every weapon can be shot as a full auto if you hold fire"

So you find it ok that in the original Max Payne 2 without mods you can do this too? Nice to see the double standards. This is the proof that you're just angry to this mod due to you can't play it normal like other people and you just wanted the "easy" walkthrough.

Also even the opposite approach to difficulty would be much better and fitting to this punisher themed mod, why not make everyone die in 1-2 shots? the protagonist too, make gunplay extremely fast and punishing, instead of turning Max Payne/Punisher game into a really bad roll dodge simulator

The true is, you didn't say how make THIS mod better. You say how to make a totally different mod.

well as i said, the mod itself looks great, but the gameplay is what kills it, maybe thats just me but when i see the word realism i expect realism not throwing logs under the player's legs so you can say it's "difficult"

Anyways i'm not hating on the mod, just the gameplay choices, still, props to the team for the hard work and the models/textures/animations

It's ok that you don't like gameplay. It's strange that you blame it because you expect something different.

Higher difficulty does not mean attrocious screen shake + enemies taking 20 mags to the face, it's not dificult at all the thing is i came here to play max payne 2 not dark souls russian edition where you have to roll dodge for 20 min and get epilepsy,

Also the thing with full auto, in the original game it wasn't so painful because the guns fired slower and there wasn't this screen shake,

And again no it's not difficult, i finished all max payne games on highest diff + did the challenges on 2, your mod is not difficult it's literally just the cheap mmo rpg approach where you make enemies bullet sponges and add dumb annoyances to the player, and the thing is no one will say that to sam lake because his game is playable + he added multiple difficulties

And last thing, my argument about the enemies being bullet sponges is not because i want a "press lmb to win" game, it's because AntiEvil multiple times outraged in the comments saying "muh realism" on why he won't add or backing up why he added a feature, while this mod is literally the least realistic thing to happen to Max Payne 2, even the vanilla experience has more to do with realism than his mod,

> i came here to play max payne 2 not dark souls russian edition
For Max Payne 2 expirience, play vanilla mp2-game, and next time READ feautre-list before download something. Cause now you sounds like a crying baby "Your Cyberpunk2077 is ****, becuse I want GTA, and this game - not GTA". Lol.

"it's because AntiEvil multiple times outraged in the comments saying "muh realism" on why he won't add or backing up why he added a feature, while this mod is literally the least realistic thing to happen to Max Payne 2"
Oh, it's good, that I remember WHAT I write here. And I write here "Realistic shooting". When you shoot - you see gun recoil, and this is realistic. Any problems?

"not everyone has to play the game in the exact way you want them to"
They can play the original game or other mods.

Yea that's exactly why i posted this review, so others don't have to make the same mistake as i did and get this mod in high hopes when in reality it's dogshit

So, basically, you're saying you didn't even read the description with additional info about this mod? You just saw some screenshots and imagined a non-existent game. That's not the problem of the mod or the creators. It was your problem that you expected something without reading basic provisions of this project.

When does it say anything about bullet sponge enemies in the description/features?
Also when i read camera shake i didn't expect earth errupting under my legs after a gunshot lol

"Bullet sponge enemies" - bosses and use armor-suits.
You can read in features "New ballistics" and "New weapon characteristics". So... Enemy without armor die very-fast.

Also you can read here about:
"Player health much lower"
"When player damages camera shakes and you see blood on screen"
and even "On player shooting camera shakes". WOW! You can know about the features before downloading, if you read feature-list!

I have never complained about lower player health or any of that, only about HOW MUCH the camera shakes, it's almost like experiencing and earthquake

So shoot in short bursts and use slowmotion, to camera shakes less. It's not the mod, where you can just hold LMB and move forward.