The Last Stand is an addon project for the Sins of a Solar Empire, aiming to provide additional and original content, depth and challenge to the game, including three new races, new gameplay elements and tactical gadgets such as mines, interdiction abilities, deployable starbases, new ship classes and more.

Of all the Xin ship breeds, it is the Chimera motherships which perhaps present the greatest threat to undefended but populated worlds. Although it does not sport the fantastic firepower of an Emperor battlecruiser, or the immensely strong armor coating of a Tyrant battleship, the mere presence of a Chimera in a theatre of war can none the less often turn the tide of battles. 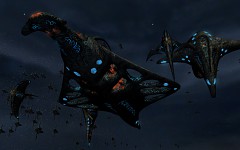 A Chimera mothership in the middle of a Xin Battle Group

The primary purpose of a Chimera is to seed new worlds for the Xin. For that purpose it can grow specialized pods in the bioform vats located throughout the vessel, and release them into the atmosphere of a planet once all defenses have been taken care of.
However, even if the planet is inhabited, the Chimera can still claim it for the Xin. But in that case, instead of seeding a desolate world with new lifeforms, the seeding pods release specialized organisms custom-tailored to wipe out existing eco-chains and reform them to better serve Xin purposes.

In other words, instead of scorching the surface of a planet like a Sovereign planetary assault ship would do, the Chimera can effectively create a Mass Extinction Event by introducing extremely aggressive agents into a world's biosphere. This process, however, takes longer to complete than simply glassing the planet, although once started it is difficult, if not impossible to stop, even if the Chimera is chased away or destroyed in the meantime. 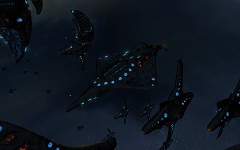 Although poorly armed, the Chimera is fairly well shielded.

In combat, the Chimera fares considerably poorer than more dedicated ships; it is not designed for front-line duty. Its primary weaponry consists of quad guided plasma ejectors located behind the "head" - like most Xin ships sporting these, the Chimera can attack targets both to the front and to the sides, although the low firing speed and number of ejector ports means it will be at a disadvantage against more combat-ready ships.
In addition, the Chimera can also release periodic swarms of gestated proto-drones; small, larvae-like creatures which are meant to one day become full sized Xin drones. These creatures still do possess the ability to move on their own, and can utilize their rudimentary weapon apparatuses to attack targets by latching onto their hull or blasting their shields point-blank range. 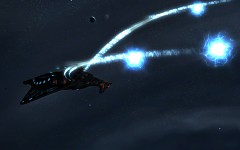 Last but not least, the Chimera can release clouds of specialized spores through the cracks in its outer layers of armor and skin. These spores can then be ingested by other Xin vessels, whereupon they can perform various maintenance tasks, providing rapid regeneration of damaged Xin ships and even being metabolized for a quick boost in energy replenishment.

Presenting the Warmaster, a sentient capital ship capable of coordinating entire fleets of Xin ships as well as nailing down enemy fleets all by itself.

Featuring detailed exposition of the Scout, Assault and Siege drones employed by the Xin to seriously wreck space whales.

A fresh issue of The New Frontiersman, bringing you news from the galaxy and beyond!

The latest iteration of the dynamic combat system which will be employed by Last Stand, this mini-mod standalone enables the feature on vanilla game versions...

The latest iteration of the dynamic combat system which will be employed by Last Stand, this mini-mod standalone enables the feature on vanilla game versions...

This latest version of the popular mini-mod adds completely new explosion effects for all three existing factions, plus a reworked and optimized particle...

The updated version of the Volumetric mod, this issue contains Entrenchment compatible version, new starbase and mine explosions, an improved fragmentation...

This mod enables fighter physics and behavior for larger ships, enabling ships handling characteristics to come into play beside their defense/attack...

A summary of the events leading up to the gameworld setting in the Last Stand mod. Lore heavy, gots picturz.

Great would be turned out mod

it sucks so bad that this mod is dead, I remember it being so freaking interesting and every new model was fan freaking tastic.

I hope he comes back one day and brings with him a team.

I would love to be able to download some of his outstanding models to give them a test run and see the amount of work he has put into this mod.

I agree with Firefly081, look at the story in Sins of a Solar Empire: Rebellion, specifically that the factions are becoming weak by fracturing, and the line "Their outcast may be our salvation, esspecially if the warning's true..." the story this mod holds connects to said story, a developer of Sins of a Solar Empire, might've seen this, hired Mansh00ter, to get his skills and the mod's story, a huge Xin invasion, encroaching on the entire Galaxy sounds like something that was "warned" about, this might all be some scheme to advance the story line of Sins in a new stand-alone Expansion... but, this is a wild guess, but a hopeful one...

manshooter does do mods for X3 and other games

I gotta wonder, maybe stardock picked up mansh00ter and hired him to make another expansion because this mod looked so amazing. It'd explain why no one has heard from him in a while ^_^

The mod is still alive: Mansh00ter posted in mod's thread on the official Sins forum.

Fall of Sol Sins of a Solar Empire

Nickzz22 Sins of a Solar Empire

Wrath Of The Advent Graphic/Balance MOD!!! Sins of a Solar Empire