Here is a look atthe new uniforms and units cards for Soviet Russia. 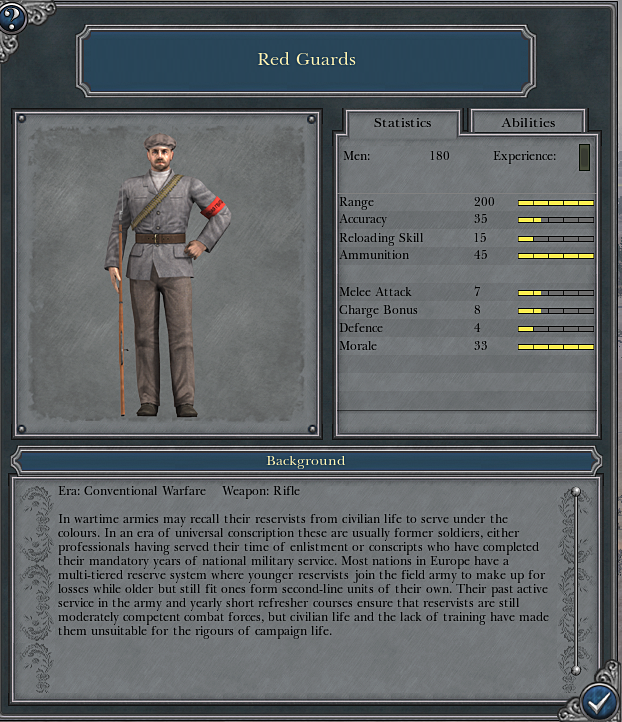 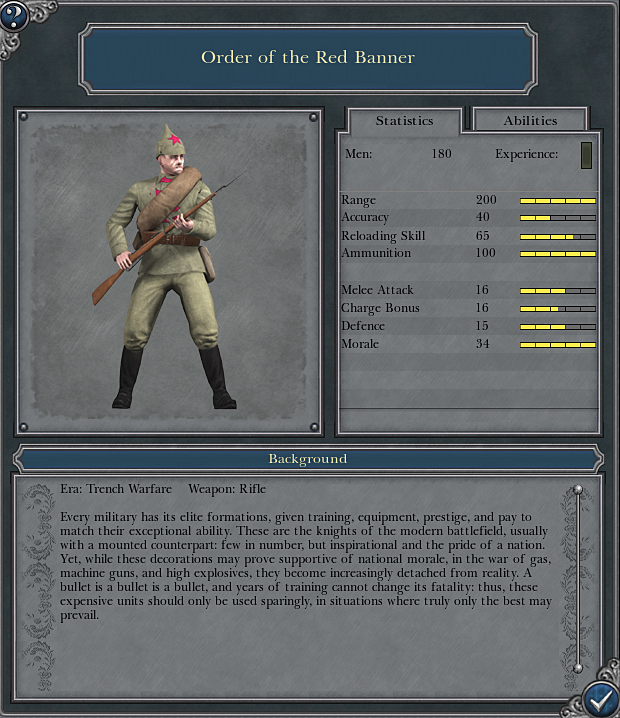 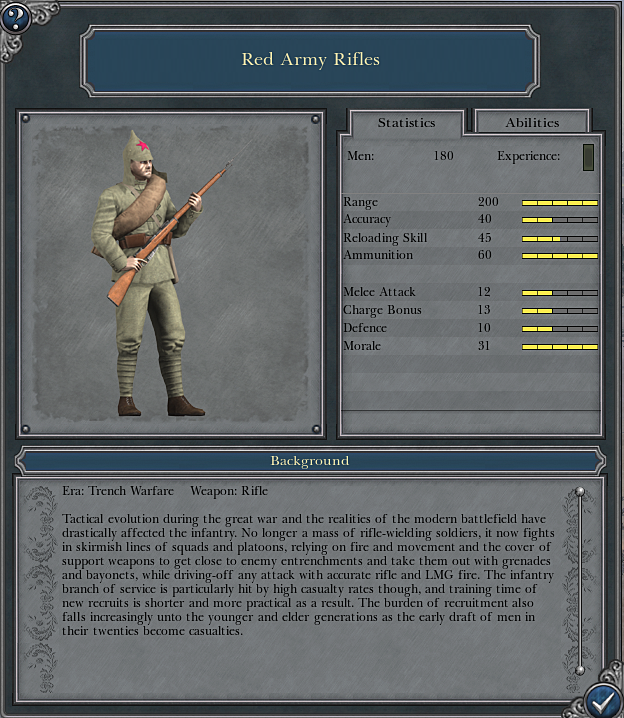 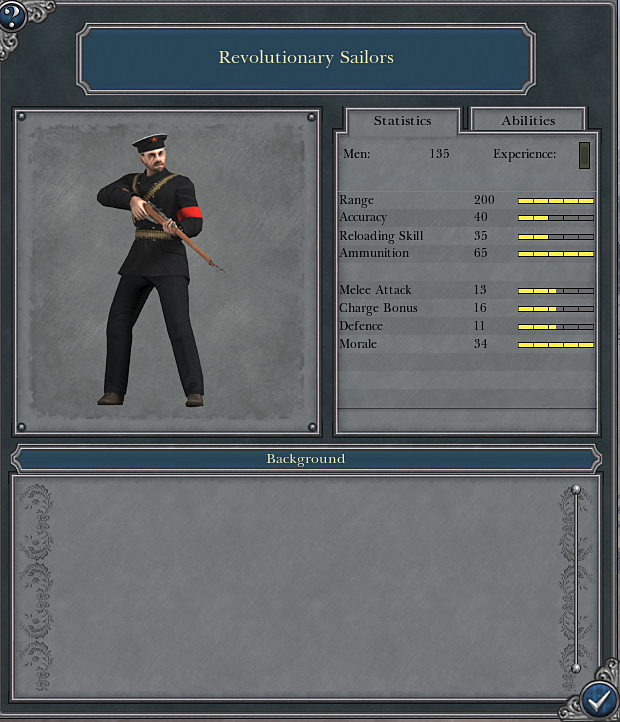 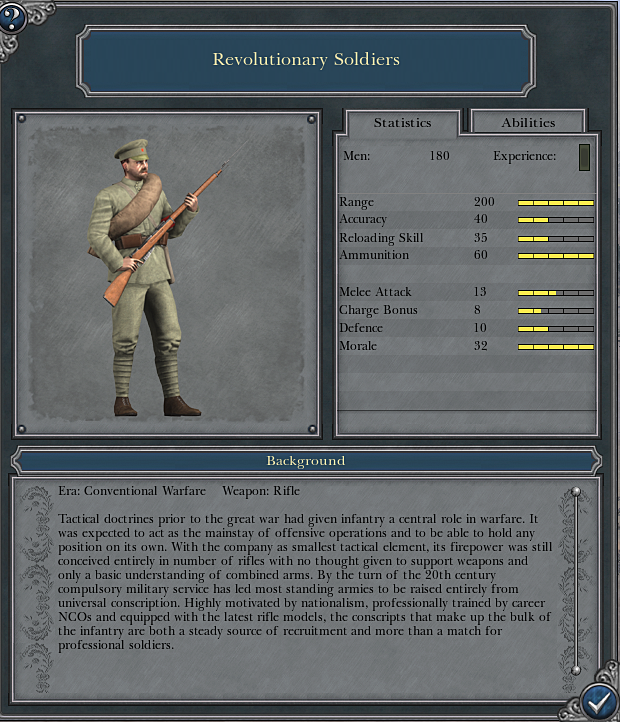 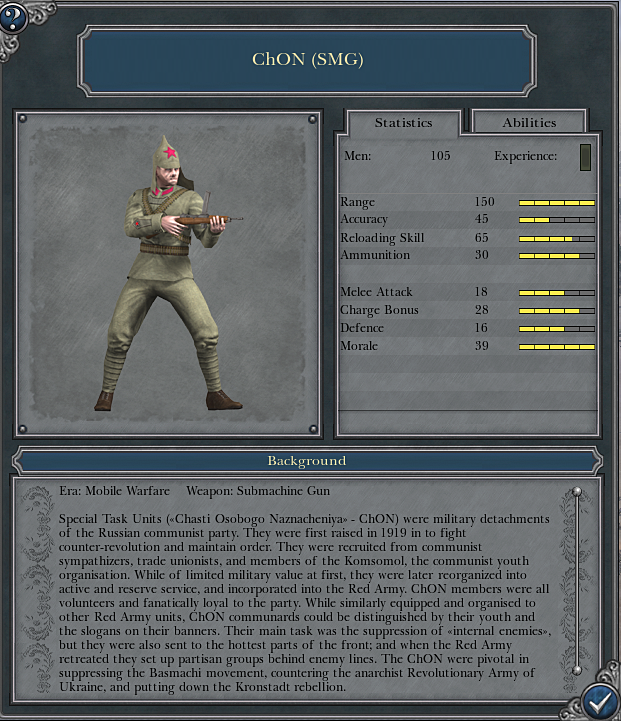 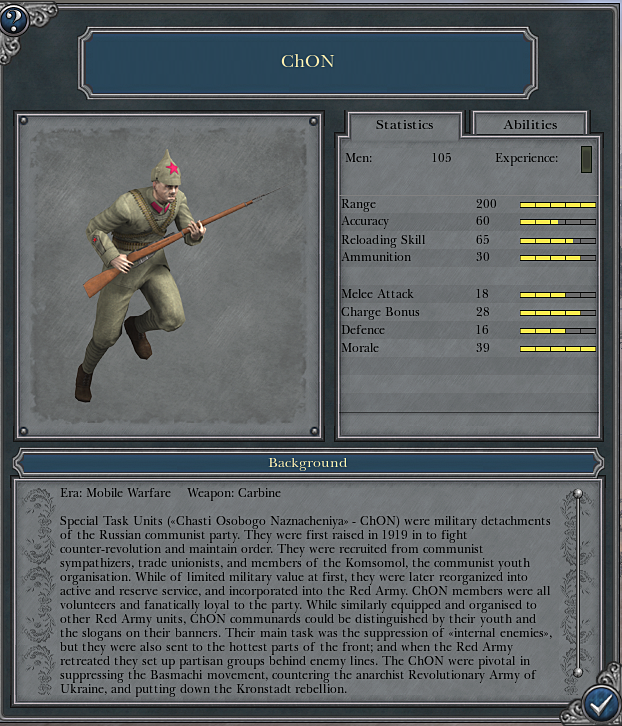 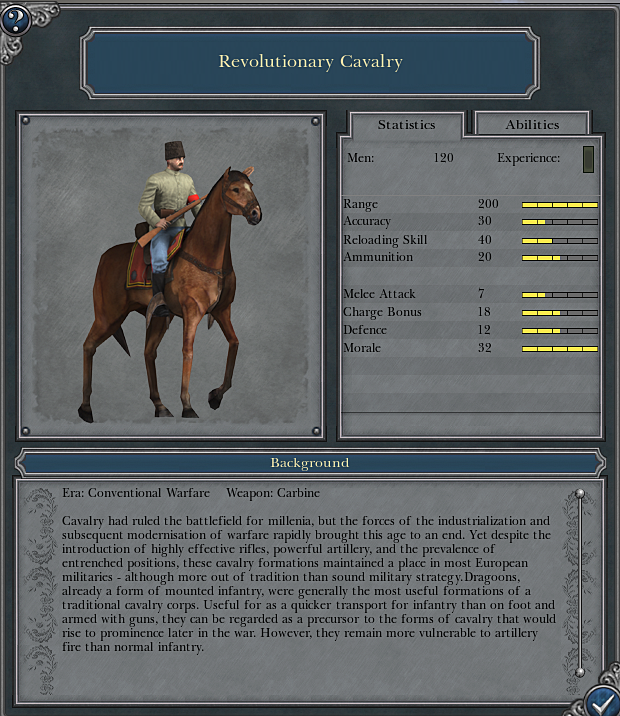 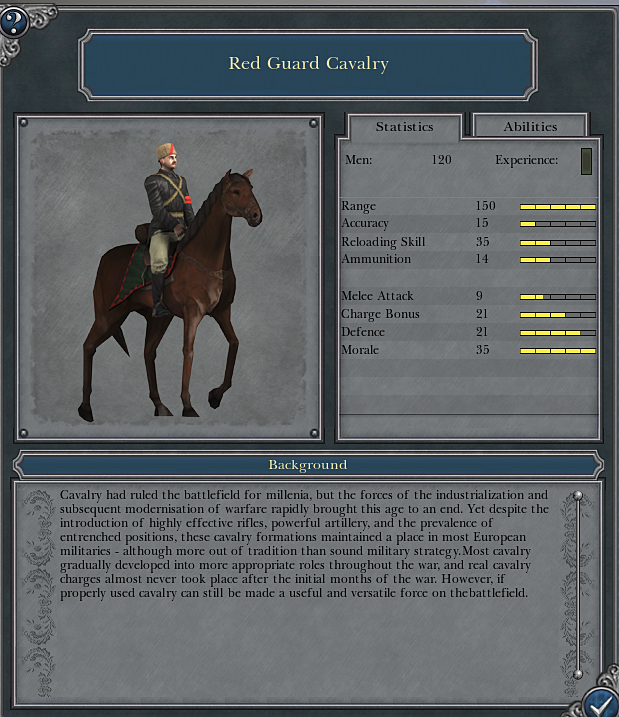 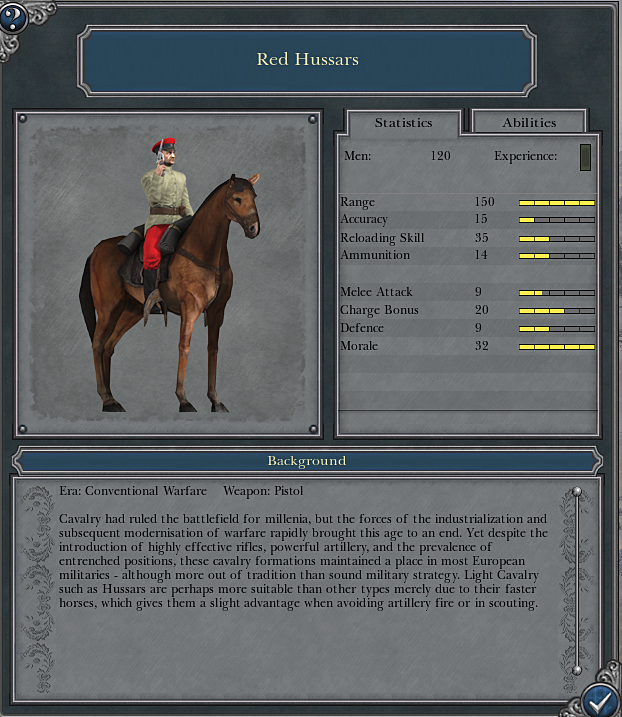 We have added Soviet Russia as its own faction on the custom battle screen. 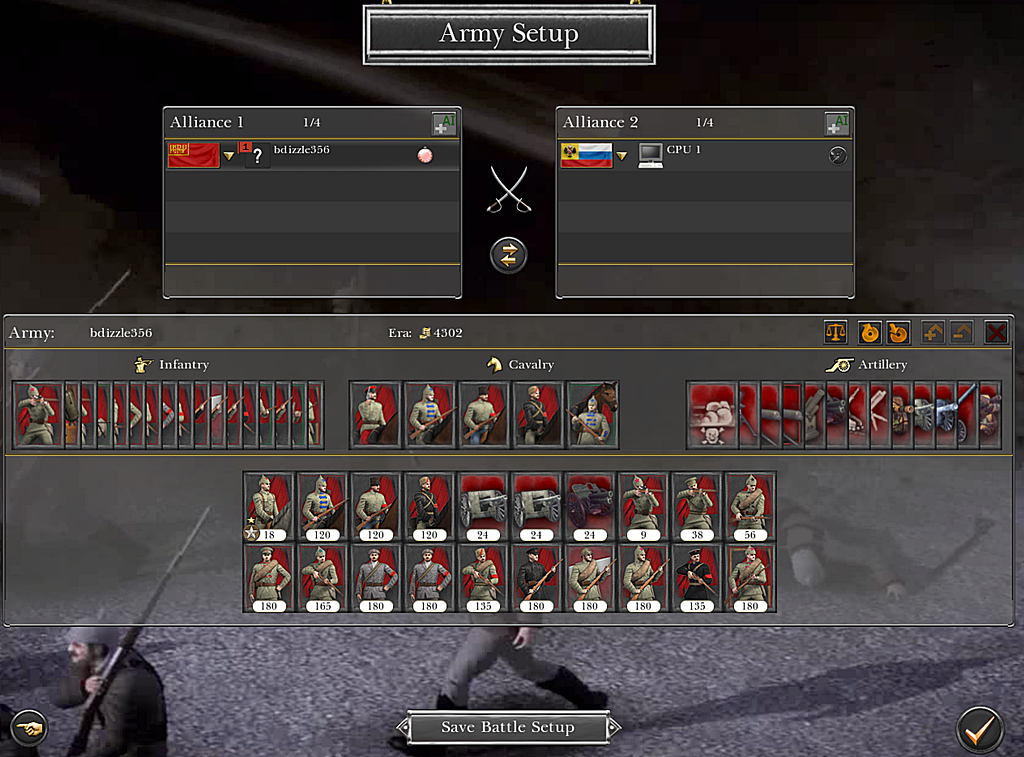 We have added 2 revolutions to Russia via scripts. The first one is the February Revolution which causes 2 turns of extremely high unrest then stops. On its own this wont lead to a full revolution unless you already have some unrest in any of your regions. The next revolution is the October Revolution, this time the unrest doesnt turn off which results in a full blown revolution and collapse of the Russian Empire. The main reason this second revolution has no off switch is once the revolution happens one of the emergent factions is White Russia so if we allowed the player to remain as the Russian Empire they would be battling against White Russia which would be very odd to say the least.

Cannot wait to see these updates released. By far my favorite mod, in one of my favorite games, done by people clearly dedicated to their craft

B-but you can still play as White Russia after the revolution, right?

White Russian is not playable because they are an emergent faction.

So there's no choice but to play as the reds now? Aww.
Ah well, looks good anyway.

You play as Russian Empire and then when the revolution happens you play as Soviet Russia.

Yeah, but there is no, like, choosing sides in this? You can't play against Soviet Russia as any kind of non-Soviet Russia? I'm real sorry if I'm getting annoying, just wanted to clear this up.

You can choose Imperial Russia but the unrest will never stop unless you side with the rebels and become Soviet Russia.

I have never seen someone so irrationally against a video game faction that they just keep asking to not play as them eeven though it is completely optional in the first place.

Not sure why you'd get such an impression. I'm not particularly against them, just asking about the options.

Unless it's not tied to the oct. 1917 and is actually preventable. Railroading it like this isn't the best solution, imo.

Will White Russian troops receive their distinct uniforms? For example, Kornilov,Drozdov,Markov,Alexeyev "colour" regiments? Some of these were issued British uniforms with volunteer insignia.

This is lovely! I hate communists, but this is glorious because of the memes! Is Italia next?

No one asked you lol

when will the update release，i cannot wait any more

I love the more paramilitary-looking units. The leather coats, the hats, the little armbands- I'm not sure what it is about them, but I love them.

will white Russians have some special units once the rebellion occurs?

Looks really cool, when are we able to try it out? are you accept beta testers?

Great work! One question. What kind of unit is located first in the second row? In leather jacket, 180 soldiers.

Finally a chance to kill some commie bastards

Finally a chance to use soviet to kill some caplist dogs

But can you add cossacks to the roster? Soviets seems like does not have lancer unit at all.

Hey!
Is it possible to change The emigrant faction Latvia to Estonia?
Historically Estonia had a much larger impact on the war than Latvia. If you look at the Estonian independence war map, then you can see that they almost reached Petrograd and almost took Riga. Plus Latvia didn't really exist then. They were occupied by the Landeswere and the bolsheviks. I hope you will take my suggestion into consideration.
Have a nice day!

How important they were historically in the region was not factored into this decision.

Just finished listening to Dan Carlin's Blueprint for Armageddon for the second time through, and I cannot express enough how excited I am for this MOD. Two questions (of course), is there any release window for v6.0 and are there any screen shots of the naval unit models?

You have no idea how excited I am to play this when it comes out! One quick question though: Will the Soviet and/or White Russians/Imperial Russia have tanks? Either through captured Western/German tanks or some of the domestic tanks like the Tsar Tank or Vezdekhod?

Russia doesn't get tanks in the update. We may reconsider this at some point depending on balancing issues.

Is the mod alive?

during quarantine spended you time for this mod ? pls advise

thank you guys, this mod is awesome

Since you're doing the Russian Civil War, is there a possibility you would create an Irish faction for the 1916 Rising and Irish War of Independence?

A quick question will you add the czechoslovak legion as a faction kind of deal to the russian civil war? If i remember corectly they played a pretty important role during it (controlled major cities and the spinal cord of railroad). They also were the only organised fighting group on the start of the revolution.

Greetings to the developers from Russia. I just want to say that the unit "Red hussar" is complete nonsense. There was no such thing. And according to the Russian Empire, the plastuns have the wrong clothes

I second that, it would be sick to be able to continue playing as Russia and wipe the communist rebels out to win.