The Great War 1918 is a WW1 modification for Company of Heroes, focusing on the last year of the First World War. Currently it features the British Expeditionary Force and the German Empire as opposing factions; however new nations will be brought over time, such as France and Austria-Hungary. The mod focuses on a realistic and accurate representation of warfare in 1918 while keeping a balanced and enjoyable gameplay.

Experience the great operations of the last year of the Great War as Germany breaks through the Western Front in the Spring Offensive; as the Entente, liberate France and Belgium in the Hundred Days offensive. Look forward to heavy artillery strikes and the infamous gas attacks. Trenches will provide vital cover for infantry while tanks will roll over the battlefield and instil fear into the enemy.

Features:
- a WW1 total conversion of Company of Heroes
- two factions: the German Imperial Army and the British Expeditionary Force
- a balanced gameplay focused on the particularities of the Great War, with trenches, poison gas and melee
- new models and textures, including tanks, planes, buildings, weapons and soldiers
- new units, abilities and commander trees that faithfully reflect the tactics adopted in 1918
- new maps featuring the elaborate trench systems of the Great War
- skirmish mode both in single and multiplayer
- a no pop-cap skirmish mode called "Grand Offensive"
- a fully integrated Cheat Mode (not available in multiplayer).
- full translations in German, Spanish, Polish, Russian, French, Italian and Chinese

As promised in the previous news update, here is the second part of the French unit preview.

Sapeurs
By 1918 the traditional tasks of the engineer corps had been largely overtaken by infantry pioneers. Instead the "Génie militaire" became specialised units in charge of tasks requiring a high level of expertise, like battlefield demolitions, gas, mine warfare... and Flamethrowers. 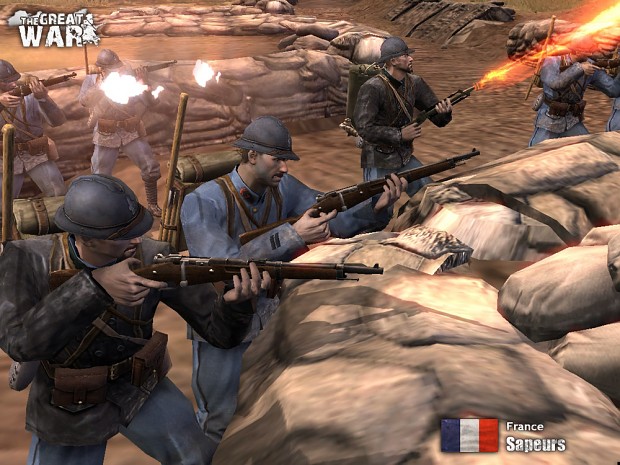 The organisation of French flamethrower units was a mirror image of their German opponents, down to their first commander being a fireman. To be effective the flamethrower needed good planning and support firepower. This required units that were specially trained for the task and given a good deal of autonomy when planning assaults.


Renault FT
Model by B-Dizl, skin by don_Durandal
While the French arguably designed the worst tank models of WW1, they also came up with the very best. The Renault FT was a revolutionary step in tank design, with a layout that can be seen even in modern tanks. The fully rotating turret made the addition of multiple weapons unnecessary, and the separated engine compartment at the back meant the crew wouldn't be incapacitated by engine fumes like in other WW1 models.
While the FT was a latecomer to the battlefield, only seeing action for the first time in May 1918, by the end of the war more FTs had been built than all other WW1 tank models together. 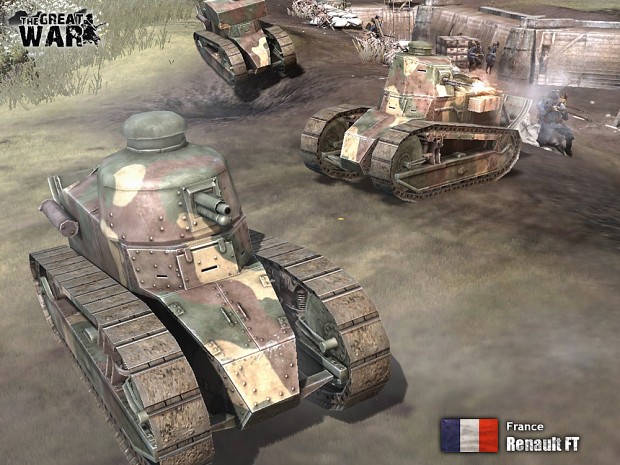 The main variations were a machinegun tank armed with a Hotchkiss model 1914 and a gun tank with a SA18 37mm rapid-fire cannon. The later could fire a variety of shells, including HE, canister and armour-piercing.


Renault FT TSF
The lack of portable radios in WW1 made communications difficult. Wireless sets were available, but these were usually cumbersome and fragile, required a conspicuous antenna, and as such were ill-adapted to the battlefield especially when on the move.
The "signal" or "TSF" (wireless) version of the Renault FT was a solution to that problem. The turret was replaced with a fixed casemate hosting a wireless set, an operator and an observer. While it required the tank to be set up to properly deploy the antenna, this gave French tank units a much-needed means of communications, especially in the mobile conditions of the 1918 battlefield. 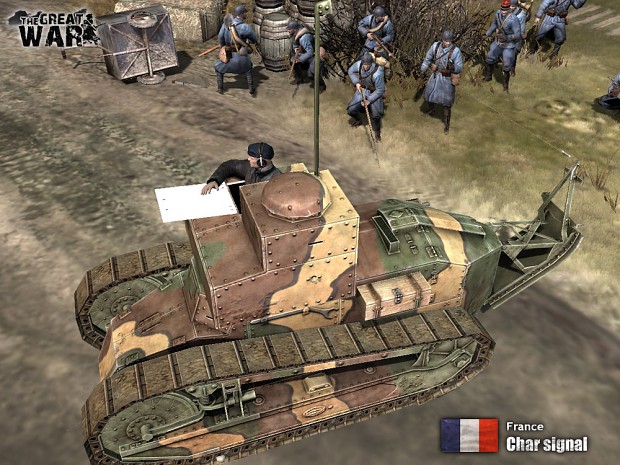 Tireur d'élite
The French Army was slow in understanding the advantage of properly trained and equipped snipers in trench warfare. It wasn't until 1916 that scoped rifles started being distributed to frontline units, and snipping was left to individual initiative. 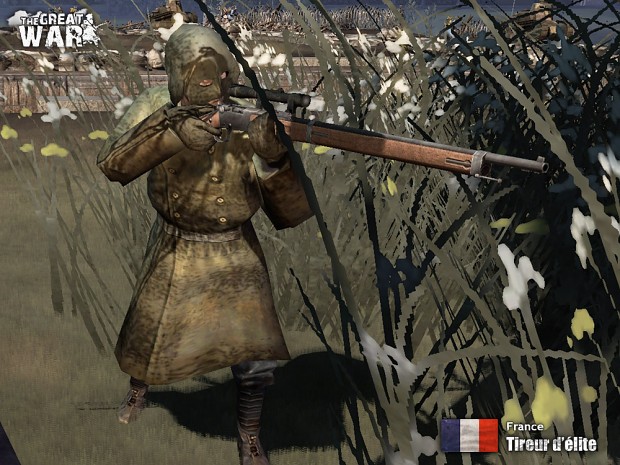 WW1 was the birth of modern military camouflage, from artillery to tanks, fortifications and individual or groups of soldiers. In the French Army, universal conscription had brought various artists and artisans under the colours. Their skills were quickly put to use and vast army workshops were set up to test and paint camouflage patterns, create dummies for deception and observation, and create new means of avoiding detection such as camouflage nets and clothing.
One of such items was the "frog" suit (named in reference to the spotted skin of the common frog, not for culinary reasons). It covered the whole body, with a masked hood for the head and gloves for the hands. It was distributed to observers and raiders.


Canon de 105 mle 1913 Schneider
Model by Regulator, skin by don_Durandal
The pre-war reliance of the French Army on their excellent 75mm field gun meant that when war broke out it was almost bereft of modern medium and heavy artillery models. The 105 L (for "105mm Long") had been acquired in small numbers back in 1913, and soon a massive order was made for more guns. It had long range, good accuracy and an excellent rate of fire, and more importantly its heavy shell was more suitable for taking out fortified emplacements than the 75mm field gun. 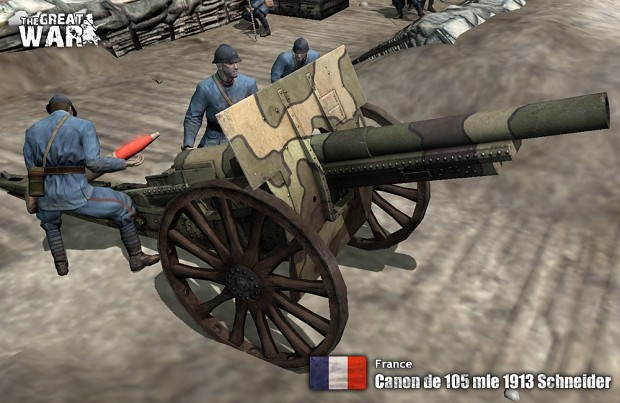 Grenadiers d'élite
For all armies, raiding parties became a fixture of trench warfare once the Western Front settled down into stalemate, and the French were no exception. At first these "groupes francs" were organised on an ad-hoc fashion, but it wasn't long before formal regulations were set up for raising and training such units. Commanders also realised that it was more effective to seek volunteers for these tasks; the thrill of action, the promise of special advantages (such as more leaves and no chores) and the lure of loot meant that there was rarely a shortage of such men. 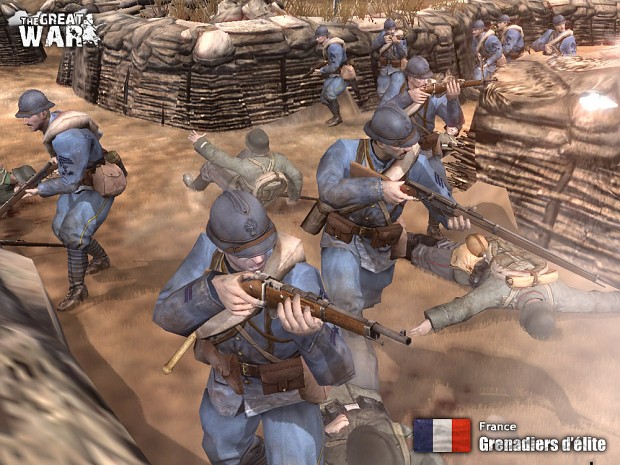 A big turning point came in 1917 when General Nivelle was nominated commander-in-chief of the French Army. He envisioned whole battalions of raiders organised along the lines of German stormtroops. The existence of these units of "Grenadiers d'élite", as they were designated, was short-lived however. Nivelle's successor, General Pétain, felt that placing all the best elements in the same units would weaken the rest of the army, and ordered the battalions disbanded and the men sent back to their old units.
Nevertheless the usefulness of such units meant that they remained in existence on a semi-official basis in most infantry regiments of the French Army. When the front become mobile again after the 1918 German Spring offensive their task was widened to assault and reconnaissance.

Models by The_Soldier, Cireva and don_Durandal unless specified otherwise.
Textures by don_Durandal
Special thanks to B-Dizl of the NTW:TGW mod for the Renault FT and Lebel rifle models, and Regulator of Battlefield 1918 for the 105L.

It's hard to preview them through images, but gameplay and sounds are also being worked on. Dzierzan has been creating realistic weapon sounds for the mod. General WVPM has joined the team as a coder.

A first preview at some of the units for our next upcomming faction: the WW1 French Army.

Here's version 1.2, the third release of The Great War 1918 - a WW1 modification for Company of Heroes.

The French Army will be a new faction for The Great War 1918, a WW1 mod for Company of Heroes 1. It will feature new units, new vehicles and its own set...

Here's version 1.1, the second release of The Great War 1918 - a WW1 modification for Company of Heroes.

This file contains the full version of The Great War 1918 v1.2 in a self-extracting archive. It will extract all the files needed to play the modification...

This file contains the full version of The Great War 1918 v1.1 in a self-extracting archive. It will extract all the files needed to play the modification...

This file contains the full version of The Great War 1918 v1.0 in a self-extracting archive. It will extract all the files needed to play the modification...

Woa... Theres hope for the french yet? This is the best news in like 3 years!

I myself am starting to lose hope a bit now. Not heard anything in some time :(

Nuh-uh. No sir. I refuse to give up. CoH2 doesnt let people mod it so this is the only place for proper total conversions. They wont take this from me.

We just gotta hold out hope, the mod for napoleon is done so maybe there will be a return

The 6.0 version of total war napoleon has released

It has and it is brilliant. Hopefully now we will see Don and the team return after a well deserved break from releasing the napoleon mod!

I am constantly having issues with trenches. A lot of times soldiers get stuck inside and can't get out even if I put ladders. Does anyone know how to avoid this? Thanks

build ladders. or download the WVPM version. (There are also canadians)

bruhh how can you play the canadians?