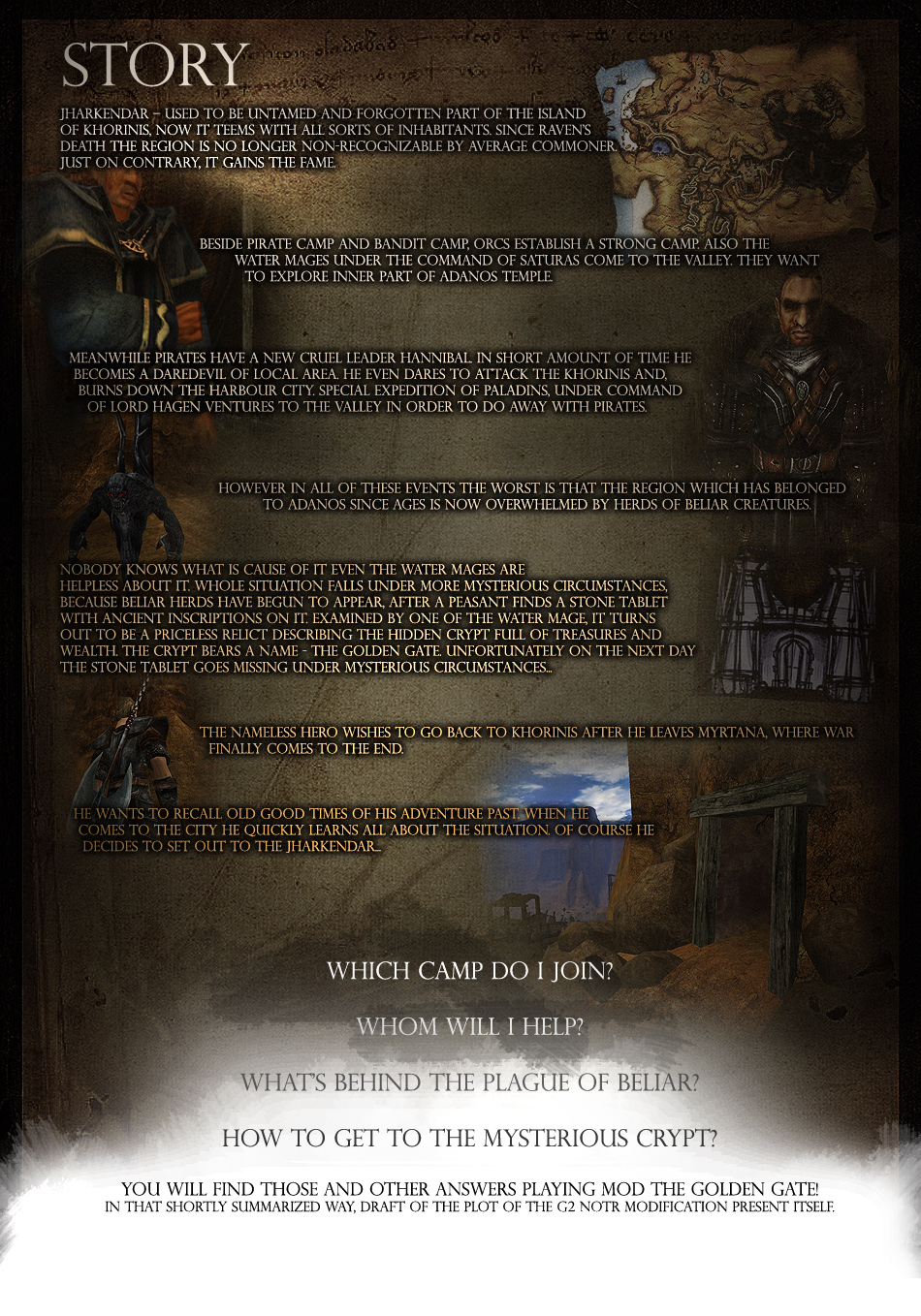 What will modification offer us?

- changed Jharkendar as well as a new huge world

- a lot of new NPCs and quests

- possibility of joining four guilds (The Paladins, The Pirates, The Orcs, The Water Mages)

- possibility of meeting our old friends from Gothic 1 and 2

Release of the Golden Gate

In this mod we play as the Nameless Hero who leaves Myrtana, where the war was finally over, to get back to Khorinis to recall the good old times of his adventures. When he finally arrives to the town, he learns that something strange is happening in Jharkendar: the Paladins want get rid of the pirates but also, there's the threat of a plague sent by Beliar. Of course, the Hero decides to go there and restore some order...

Please visit our site and here you can find Polish solution (it can be translated with the google translator).

Finally we have finished translation into English and now we start testing it. So the mod in English will be released soon. Be ready to enter the Golden...

The Golden Gate is being forged in our modder smithy, meanwhile we prepared a short trailer which shows next changes in graphic and general design of...

New graphic in the Golden Gate

Today we want to present next new materials from the Golden Gate modification.

In this mod we play as the Nameless Hero who leaves Myrtana, where the war was finally over, to get back to Khorinis to recall the good old times of his...

1. i have problem finding this plant (Ordinary Mantis) quest by the water mage for fortunos elixir to teleport back to valley of mines old camp castle...

2. i choose the orc camp.. i complete all quest except to that (food recipe), and become mercenary.. then varek leader of the orc camp wants me to spy on the pirate camp to know what hannibal planning to do.. hannibal new leader of pirates(the one who hang my buddy greg) i got his side and he want me to spy in the orc camp... i tell the orc leader all hannibals plan. hannibal will attacked anytime as soon as i know what orc camp planning. (but i wont, im in the good side). varek called help by lord hagen to start the first attack on the pirates. but they wont attack until i know about the tablet... the problem is i cant find (Argos). the one who found the tablet and sell it to christian..

3.someone stole the tablet from christian the water mage in the paladin camp.. he wants me to find the man named (Argos) to ask some question.. i coudnt find him..

i want to complete all side quest.. someone help me?

How to complete Pallos' Nightmare quest? I found the dead body and talked to Pallos, but I have no clue how to proceed.

There are two things you need to find, a body named Ruten, and a bloody axe.

Starting from the Water Mage camp you go to the left until you pass the big tree on your right, then go right until you come to the edge of the water, next to the wall there should be blood stains and a body.

To find the axe you travel through the Swamp teleport and it is behind you (turn 180° degrees) inside a bush, next to the wall and the big tree.

sir can you help me where i can find a ordinary mantis plant and.. and argos

Im sorry for bringing myself here again, but there is a problem.

Im having problems with appolos's quest with the nightmares he having, i cannot find a thing in this damn swamp. and it's also a problem since it's one of the main story quests and it seems nothing works.

im having problems with the mercenary baliar cult quest with chaktur. I don't know what the heck to do with the trap he set up on me, I always die while digging the cross.. help

i hope u still playing,, dont dig. dont trust him. dont agree to what he say,,run to the camp report him to varek..and the quest beliar's cult will be completed..

Well, i already figure it out and everything is alright.

Does anyone know how to become a pirate??

u need to join the other camps.. and if become one of them.. they will give the task to spy on the pirate camp.. u need 5000gold entrance fee. or talk to alligator jack he will have a quest for u he will give u 2000gold. ihope it help to someone playing this present 2019..

you cant come inside the even you have pirate uniform on.. unless you pay the fee from borys

you need a pirate uniform and put it on.

Great mod, offers many hours of fun, old friends, new friends, new textures, friendly orcs and bandits, new weapons, armors and many more.. BUT there are a few bugs and, for my taste, too many searching quests + the game is insanely hard in the beginning. It also has quite dissapointing ending, in the good way! Becouse I was dissapointed, that it had to end :D Yet, I had so much fun, but also was raging hard sometimes :D I really recommend this mod to someone, who want some nostalgia, wants to meet…

Karibik - Caribbean Stories Gothic II - The Night of the Raven

Uriziel Gothic II - The Night of the Raven

Yet Another Unofficial Patch Gothic II - The Night of the Raven

Grzesznicy PL Gothic II - The Night of the Raven