This mod will add an Elven Faction to your Battle for Middle-Earth game while also making various changes to the other factions. New heroes include Galadriel, Elrond, Haldir, Gamling, and Gothmog; Spearmen of the Havens, Mirkwood Scouts, and Riders of Rivendell are among the new units. A few changes will be made to the campaign for the initial release, with greater plans for later versions. While this mod will not add anything terribly revolutionary in terms of gameplay, it does offer some of the most high-quality skins you'll find in any Battle for Middle-Earth mod. The Elves will also offer new strategies for cavalry, stealth, and sieges. 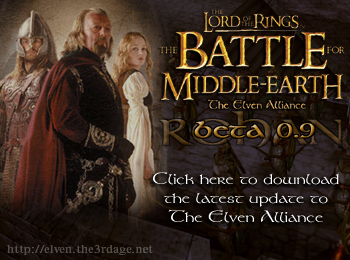 Where now the horse and the rider. Where is the horn that was blowing.

Here it is, the latest version of The Elven Alliance. This update features the many changes made to Rohan since the last release, as well as all the new models and skins for other factions featured in updates. A full list of additions, changes, fixes, and bugs can be found here.

A few things of note:

-you do NOT need the original release installed to install the update
-if you already have the original installed, this will replace the older version
-PLEASE read through the installer. It includes Installation Troubleshooting as well as important terms of use information
-if you're still having problems after reading everything included in the installer, make a post in the forums, and I'll do my best to help you out

"We come to honour that allegiance" It's finally here. After nearly 17 months in developement, you can finally download a playable version...

This is your chance to be part of one of the most anticipated mods for Battle for Middle-Earth! All you need to do is record yourself doing the voice...

After a long and unexplained absense, I'm back with the first trailer for the Elven Alliance mod for the Battle for Middle-Earth. Furthermore, I...

Beta Has Been Released!

Beta for the Elven Alliance has been released! Make sure to check out the official site to find out how to apply. Take note that there is no direct download...

An exclusive Elven Alliance trailer made just for the 2006 ModDB Mod of the Year Awards.

Here's the latest version of The Elven Alliance. A complete list of changes can be found here: A few things of note: - you do NOT need the original...

The Elven Alliance beta. If you have had installation problems, this is a new installer and should work fine. Sorry for any inconveniences.

The first official trailer for the Elven Alliance mod.

in French , where is it

Splut up the elves other wise its boring

those this work for single playar?

Kings of the West Battle for Middle-earth

The War for Arnor Battle for Middle-earth