The Deluge is a modification which brings us into the cruel and bloody wars of the 17th century. You'll be given an opportunity to play as a various characters of those conflicts: you can choose between 7 different factions and a lot of different, historically accurate troops.

In The Deluge you'll find huge amount of changes and enchantments made to gameplay. We added tons of new features - some are big, some are quite small - many of which are unique and you'll not find them anywhere else.

Invasion rules are simple - group of players gather in one team and try to defend their position against hordes of enemy bots, surviving as long as possible. This will require a lot of team play and planning.
Galleon Wars will let you to take part in epic naval battles, where you and your teammates will try to sunk enemy ship(s).
Squad Leaders is perfect for those, who like commanding their own groups of soldiers, giving them orders and leading them to battle.
Last Man Standing is a fight with only one victor. This mode combined with additional map scripts and tools, which we made available for map makers, can give you an ultimate "Battle Royale"/"Hunger Games" experience.

One of many aspects which make our mod unique comparing to other M&B mods is a professional soundtrack, that was written exclusively for The Deluge by talented Sławomir Jabłoński. New music fits “the feel” of the mod perfectly and sometimes it’ll even give you the creeps. 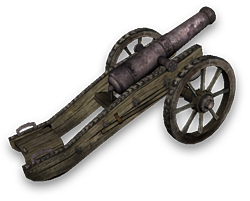 "The Deluge" introduces advanced cannon system. It supports different cannon types of various power and range, which can be loaded with two kinds of ammunition - cannonballs, grapeshots and canisters. Cannonballs are useful when engaging enemies at long range and for environment destruction. Grapeshots are useless for long-distance combat and do little damage to structures, however, due to firing multiple projectiles and their wide spread, they are really deadly at close range. One shot of that type can take down a whole group of enemies.

Cannon system in "The Deluge", even if technically quite complicated, was being written with simplicity in mind. It meant to be as much user-friendly and as much fun to use, as possible. 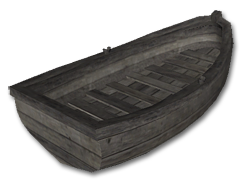 In "The Deluge" boats are fully controlled by players. Literally, you can sail wherever you want... as long as you'll stay on the water, of course. ;) Be aware though, since people in boats can be an easy pray for enemy sharpshooters or even artillery. Well placed cannon shot can sink a boat along with all the men on-board.

Ferries are much safer to take and can make good defensive positions sometimes. They're not as mobile as boats and their movement is limited by ropes, so they can sail only in two directions - from one river/lake bank to another. 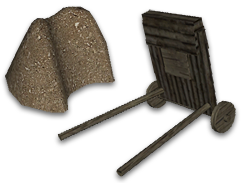 While weak in direct combat, engineer can be the guardian angel to his team-mates. Thanks to his unique abilities to repair, dig and build (and destroy) stuff, he can decide the fate of the battle. He can construct wheeled shields, which can be pushed towards the enemy and protect friendly troops from enemy fire. He can repair broken cannons, he can easily destroy enemy wooden structures with his powerful axe. He can also use his shovel to dig up some heaps, build small pallisades or 'chevaux de frise' which can be used as a provisional cover. 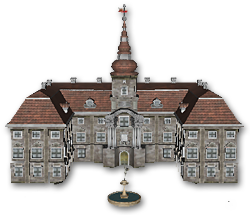 Action of "The Deluge" takes place in quite different setting than Warband. Therefore, you can expect to see a lot of new structures created for the mod. The feel of the world need to be changed, so it would look much more like XVII century. "The Deluge" graphic artists made many new models, to make this possible and to bring this XVII century vision to life. 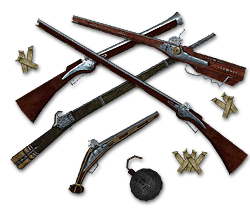 In "The Deluge" mod you'll find many different types of blackpowder weapons used in that history period. We bring you not only muskets, arquebuses, puffers and pistols, but also unique weaponry, such as deadly blunderbusses (which fire multiple projectiles at once), double barreled guns and some combined weapons, like sword-pistols for example.

Blackpowder weapons wouldn't be so fun to use if there were no good sound and visual effects related to it. Therefore in "The Deluge" mod you'll see a lot of new particle effects related to bullet hits and gunshots, all this supported by new sound samples. Firearm battles never have been such spectacular in M&B, trust me.

And if you're not feeling like shooting at your enemy, you can throw some stuff at them. Get a hand on few grenades and send a whole group of your enemies at once straight to theirs maker. 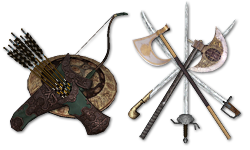 Shortly speaking, in "The Deluge" mod you'll find tons of new stuff, which can be used to kill your enemies in the way you like. Long and short, big and small, pointy, blunt and sharp, heavy and light, melee and ranged... We have swords, sabres, stocks, yatagans, daggers, all kinds of new bows and arrows, axes, military picks, maces, spears, lances, pikes, bardishes, bills... et caetera, et caetera. There's plenty of that, just check it out. 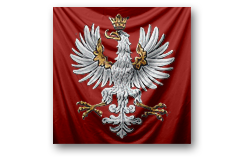 Heraldry was very important in XVII century Europe, so in "The Deluge" mod we greatly expanded it's meaning. We replaced all Warband banners with new, historically accurate ones. We heavily modified Native code, to add advanced heraldry support and improve it's visual in-game quality.

In "The Deluge" mod you will be able to play each multiplayer map in different weather conditions, at different times of the day (and night) and during different seasons. Not only visual effect will change, but it will also require a change to your tactics.

Weather, time and season can be changed by an admin or by a poll accepted by majority.

World in "The Deluge" is no longer static. You'll notice that environment around you responds to current weather conditions and animate according to wind strength. This will apply not only to flora, but also to other things, like banners, tents or even window curtains.

Those are just few of features our mod has to offer. Download, check them all out by yourself... and meet us on the battlefield. ;)

The Deluge version 1.010 is finally here. It took some time and a hell lot of work, but we finally made it.
Full list of changes can be viewed here - changelog @ Steam Workshop 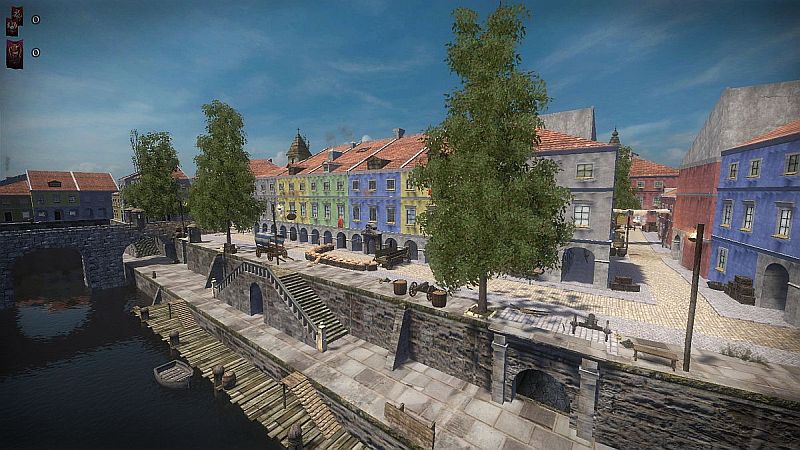 Next "The Deluge" patch can be clearly seen on the horizon!

Next The Deluge patch coming soon

There wasn't much going on around lately. But it's all about to change...

The Deluge 0.552 patch have been released.Check list of changes for more details.

The Deluge 0.5 has been released. Our servers are up and running, our website is also ready.

The 0.83 patch fixes many critical bugs and adds some cool new stuff. Read the description for full list of changes.

This mod also could've also been developed into something WAY better than Blood and Gold Caribbean. So much potential here. MP is a clusterfuck. Warband needs some serious well fleshed-out 17th/18th century mods.

i agree (i liked Blood and Gold Caribbean)

anyways, there was alot of potential

i had a talk with someone in the forums

although sadly they're still not in the mod

however thankfully the Bannerlord mod,

The Deluge With Fire and Sword

How do i fire the mini cannon? when i load it with the cannon ball or any ammo its says that its the wrong type

Its so hilarious, even after all these years people still complain about no single player while at the same time the mods servers have been empty for like 2 years cause they have been taken over by polish puberty gangs making the servers loiter grounds for their members to troll and harass people, including the admins and polish clans, and no ones complaining.

You fellows, update that ding dong already... dammit i saw the guts of your files, you were planning on adding france and spain and even had Loads of clothing ready but gave up midway....

and what about Denmark-Norway
they can be different by including kalthoff repeaters
and Dutch and German Landsknechts, and maybe half armors

also give the turks their yataghan swords back

where are the half armors for the mercenary pikemen of Sweden ? (i know this isn't the 1500s anymore but still)

and also i want Three Quarters Armors, plate gauntlets and Armet Helmets for the HRE Heavy Cuirassiers
(in the 0.552 version the description of the swedish cuirassiers said they wore Three Quarters armor and armet helmets)

I wish this mod had singleplayer. That would've been fun to have this experience without having to get interrupted by other players.

that is all i ask for in this mod

Multiplayer & Co-op
Tags
Embed Buttons
Link to The Deluge by selecting a button and using the embed code provided more...