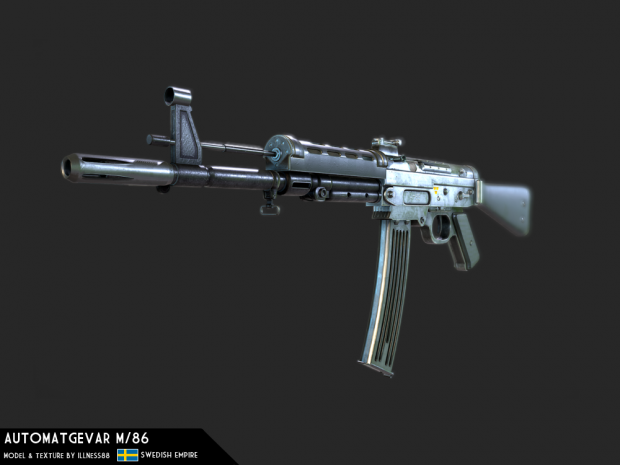 This is really awesome, dude! I like it! :D

“The Automatgevär m/86 is a Swedish automatic rifle developed and designed by Swedish gunsmith Stefan Augustinsson in the 1980s. A prototype version known Ag(P) m/82 proved to be very successful in trials as well as seeing very limited use in the short border war with Denmark in 1983. Following the Ag(P) m/82’s initial success and the eventual development of the m/86 in 1986, the Swedish Imperial Army ordered it in bulk to be the new standard issue service rifle. The Ag m/86 saw widespread service against Russian-led Coalition forces during the Second Great Northern War.”

Will be the main weapon used by the Swedish rifleman class. The rifleman replaces the original bf2 specops class, and are just basic soldiers with no real specialities, unless you count their powerful assault rifles, in the case of the Swedes, the Ag m/86.

[A full render can be viewed here: Skfb.ly ]