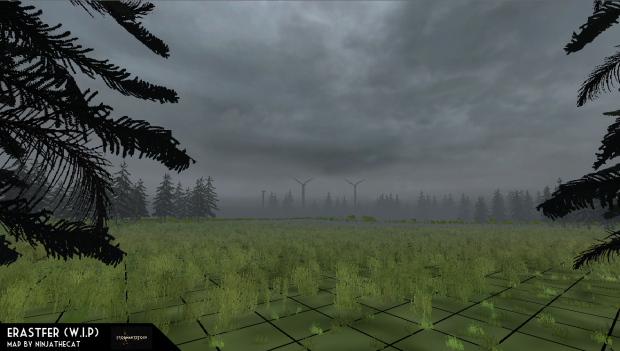 Another image of the work in progress map "Erastfer" taken in the Bf2 editor. Things may seem sparse or disappear in the distance but this is due to view distancing, there is more beyond that can't be seen. These images aren't of the highest quality.

'The Livonian Offensive was a major part of the inital Russian offensive into Swedish territory. Striking from the southern end of Lake Peipus, it was the aim of the Russian 6th Army under the command of Vladislav Ryzhkov, a veteran commander of the Russo-Japanese Wars, to capture the area south of the major city of Dorpat. After securing the city of Marienburg, the 6th Army began their push northwards towards Dorpat. Unexpectedly, Swedish forces were encountered well dug-in at the small town of Erastfer, around 30 miles from Marienburg in the south and another 30 miles from Dorpat to the north. Fighting in and around the town was fierce, but eventually, the Russians overcame the Swedish defenses and made a break out for Dorpat. The Battle of Erastfer marked the beginning of the end for the mobile warfare that was commonplace during the early phase of the war.'