For more than ten years Star Wars: Rogue Squadron 3D, which became a Star Wars arcade game classics, was a source of inspiration for many and many fans. Unfortunately unlike some other Star Wars games there is not any tool available which would let fan community to expand the game by developing additional levels and modifications. But lots of work has been done already for understanding the game data structures and the ultimate goal is to make new Rogue Squadron addons a reality. FOR ALL QUESTIONS/COMMUNICATIONS PLEASE USE THE FORUM.

The petition asking LucasArts and Factor 5 to make the Star Wars: Rogue Squadron 3D level editor available to the fan community has been started in March 2009. After more than a year we have hit the bar of 200 signatures today. Factor 5 has been passing through dramatic decline which left its US office closed and many unfinished project canned. Recent news about president of LucasArts leaving the company cast a shadow on hopes for a Rogue Squadron revival project similar to highly successful Monkey Ireland Special Editions series. 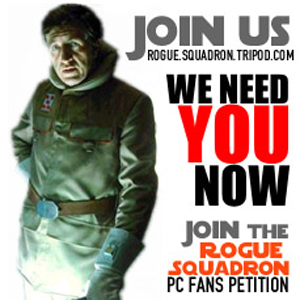 In September 2009 there was some correspondence with a game developer from White Harvest regarding our petition. What that person said about Rogue Squadron was that "...LucasArts owns all rights, assets and tools to all Rogue Squadron games, and are the only ones who can authorize this. I'm glad that you're still enjoying the old Rogue Squadron,... but I doubt that anybody will ever release the tools. It's actually quite a bit of work, and the interest isn't big enough (not unless the number of petitioners reaches 5 or 6 digits). Regardless, the request would most likely have to go through LEC."

Our last year call for joining forces to develop Star Wars: Rogue Squadron 3D Editor by ourselves was not a success to put it mildly. But there were few interesting ideas floating around e.g. using an existing engine/game to start a Rogue Squadron mod/total conversion project. What do you think about it? Which engine/game is the best for such a project? Would you be interested in joining it?

Unfortunately this was not much of a positive news, but it is encouraging to see that there are so many devoted Star Wars: Rogue Squadron fans around. Nevertheless a message with updates on petition is to be sent to LucasArts with a hope that this might result in their positive decision.

For more than ten years Star Wars: Rogue Squadron 3D was a source of inspiration for many and many Star Wars fans. But unlike some other PC games there...

Using this small utility you can easily explore the structure of .DAT and Bundle. data files, also with the same easiness extract any resource from these...

hello :) i know this is pretty old and i wont be suprised if its not active anymore but y not right, i can say for sure theres a lot of people myself included who'd have signed the petition had we known, though i do agree that a conversion mod or remake has a better chance. ive been searchin a lot lately for star wars mods which is how i came across this, theres just not enough good star wars games, i mean granted the old ones are really good, but newer one's would be nice, and on more than one era too! in a way im both new and familiar with mods, im no good at making them but ive been gettin into them more. im actually downloading the galactic warfare mod for cod 4 modern warfare right now and before that i was doin KoTOR 1 and 2 but i stopped once the site i got my mods from changed. but a remake or conversion for this based on the space battles is one I REALLY look forward to, ive always loved the space ships and space battles in star wars more than any other part. so yeah his is my first ever time posting my thoughts, sry if it seems a bit awkward lol just felt like i should start, also sry if anything i typed goes against a forum posting rule or 2, im really new to this

Also wouldn't that be cool if Rogue Squadron ever had a multiplayer battle? We can battle ourselves out with any vehicle or craft. That would be awesome.

I hope you guys are still on that Rogue Leader 3D. Can't wait to play the Battle of Endor and the Strike at the Core level on a PC version. It'll be exciting for me.

I always wish somebody modded the game to let you play as Tie Droids because ever since I was little I wanted to play as them and even Tie Bombers.

We have the right to recreate Rogue Squadron with new graphics ? The idea would be added a multi and take back missions to the campaign mode ?

This was the idea of the last call back in 2010. As you can see unfortunately, we did not have enthusiastic enough response :)

I see that the petition was created for that Factor 5 give us the level editor, but why wait Factor 5 ?

I do not know much about the creation of the game, but I know that the re-created would be much better now, I think if this was more shared pérition you have had a lot of signatures.

I think trying to find a creator team and proposed to them this project would be a good idea, do not you think?

Well that's one more name bring the total signatures up to 476.

Thanks, Dune02. As you can see with the current voting speed we won't reach any meaningful volume any soon :(