From Single Cell to Galactic God, evolve your creature in a universe of your own creations.

Play through Spore's five evolutionary stages: Cell, Creature, Tribe, Civilization, and Space. Each stage has its own unique style, challenges, and goals. You can play how you choose — start in Cell and nurture one species from humble tidepool organism to intergalactic traveller, or jump straight in and build tribes or civilizations on new planets. What you do with your universe is up to you.

Well BetterSpore 1.5 is finally here! Hope you enjoy and make sure you read the instructions on how to install BetterSpore safely. We apologize for not including the parts we made, however they were not up to our standards, and we will continue to work on them and we will have more info on that soon. 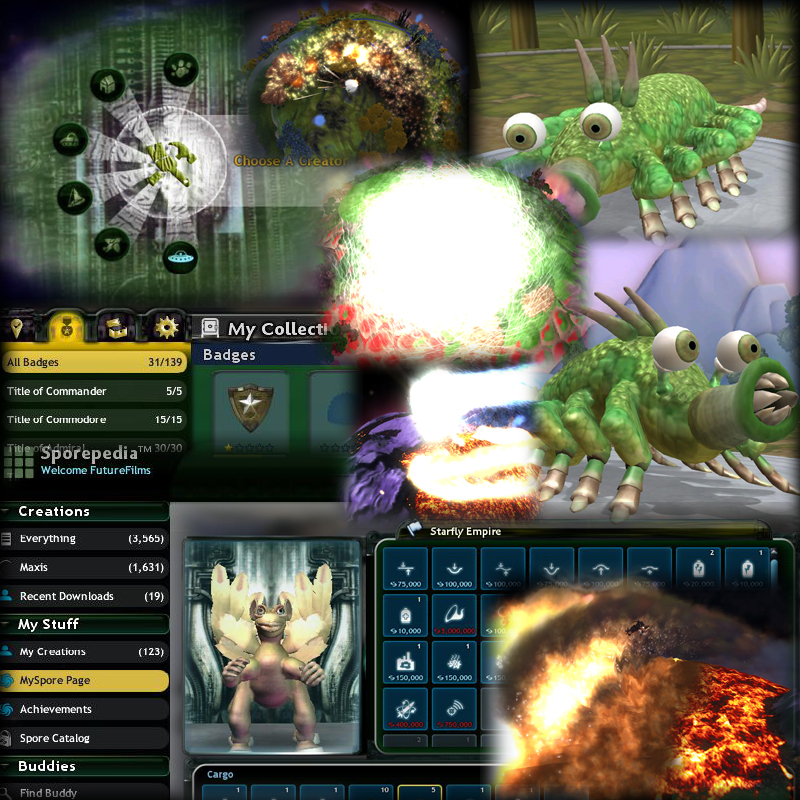 What is BetterSpore?
BetterSpore is a community made mod which improves many aspects of Spore. There are many features in this mod all of which are optional. This is not a Maxis made mod, it is made by the community using SporeMaster, and will be used at your own risk, we describe later on how to minimize problems. We have extensively tested BetterSpore on a variety of spore gaming platforms, and we have reduced out many of the problems. Go to the Bugs page to see all the current know bugs, and to post new ones.


Features
1.5 is a overhaul of the old BetterSpore with many new features, here are the highlights:

For more on these features download and read the Readme.

Mod Links
- SporeMods - The community for modding
- How to install mods
- Sporemaster - Start your own mod today
- The Spore Mod Index - With over 80 mods!
- How to mod spore - basics
- Other modding tutorials
- Better Spore Preview: New Parts

If you found Spore's space stage depressingly empty, its first expansion could be of interest...

Void at Sporemods has released a modding program for spore, in collaboration with others, called SporeMaster. Even though it is only a beta release it...

Spore's Creature Creator has launched and scratches a creative itch many might not have known they had in the first place.

Squirrels! content pack for Spore is available now from the Sporepedia and here at ModDB. A quick installer will be available in 1 day for those having...

This mod allows you to change the walls of your cities in Space stage. The uploader is NOT the original creator of this mod, the mod provided "as is...

A Mod that Makes things Easier in Spore. Including Infinite Staff of Life, and Other Tools and Boosting Damage from Weapons and Weakening Enemy Weapons...

All cell mouths, movement and attacking parts only cost 5 DNA! (eyes still cost 5 DNA, same as before) Now you can have a lot more parts on your cell...

Now how does one install it cuz i didn't get it

Could you please implement something that would Auto place buildings once in the space stage, please. i need to make my super colony, and after 70 some odd planets it's getting pretty ******* annoying laying down all those buildings over and over again. Please sir, or madam, please I implore you. All I want is to take over the universe, and without something along these lines, it's going to take a millennia

You guys should check out Forgotten Spore: Galaxygamestudios.com

It improves the game in so many ways.

Ok here's the link to the latest version since the website layout is confusing for some people: Forums.forgottenspore.com

The page also shows whats been added in this version.

Everything's so confusing, how do I download forgotten spore from that web?

i had a "magian" empire on spore, i had a massive alliance that protected a wormhole that lead directly to the grox, bad thing was... its a two way wormhole, Soo, because the magian empire i would get abducted by groxlings all day!
...but those days are over. (curse you microsoft system restore!)

The first build of spore was nice and when i see the projects in 2006 then i said i want this and after then i look the newest version i was sad to see how they can totally ruin a good idea. The first build was more impressing and had better dinamics and was more realistic. The EA adjusted version maded to 10-12 years olds and every good idea droped coz was too violent and they doesn't liked. The sad is maybe that build complete deleted and cannot take that source to make a real better spore.

This is one of the best games ever created :D