Fleet Operations is a popular skirmish and multiplayer orientated total conversion modification for Activision's real-time strategy game Star Trek Armada II. The project's goal was not only to create a simple "modification" but as total conversion to make Armada II a worthy successor to the second best selling Star Trek game Star Trek: Armada (behind Interplay's Star Trek: 25th Anniversary by a small, but fair margin).

T his patch - most importantly - fixes the frequent, frustrating multiplayer out of sync (OOS) problems, some of which that have been present since the first 3.0.0 release. These issues made playing cooperative AI games online nearly impossible without resulting in a desync and eliminated the possibility to use wormhole-rich multiplayer maps.
We would like to thank everybody profusely who was involved in those long and tedious (but fruitful!) hours of out of sync testing.
The multiplayer Tunngle integration is also fixed, allowing you to immediately jump into the correct Fleet Operations lobby to play online games!
Although this is not the long awaited next version - rest assured, 4.0 is still well on track. These bug fixes are a direct result of work on our next version. 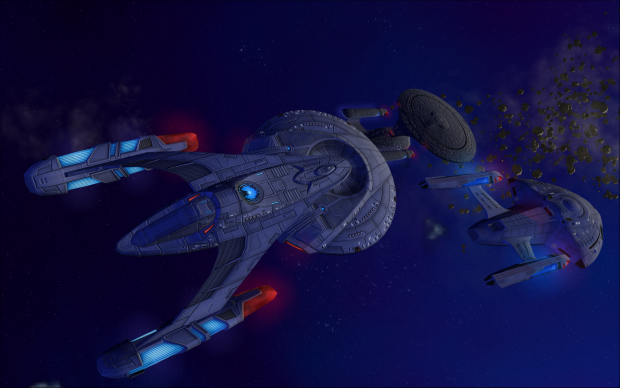 Discover a new Federation specialist vessel in the next version: The Calypso Class, bringing holo-emitters to a new use.

Fleet Operations tries to keep close to the Star Trek shows, especially for graphics and visual effects. Yet, we always had a slight but important issue...

Now after 3 weeks of hard work, here is the next version of Fleet Operations. Introduced in 3.2.0 the Romulans received an upgraded Generix class and...

The next installment of Fleet Operations is now live. After 4 month of development 3.2.0 is here! In this release we focused on smoothing out some features...

3.2.7 is a full install. A previous installation of Fleet Operations or Armada II is NOT required. An incremental patch from earlier versions of Fleet...

3.2.0 is a full install. A previous installation of Fleet Operations or Armada II is NOT required. An incremental patch from earlier versions of Fleet...

3.2.0 is a full install. A previous installation of Fleet Operations or Armada II is NOT required. An incremental patch from earlier versions of Fleet...

3.1.4 is a full install. A previous installation of Fleet Operations or Armada II is NOT required.

Patch 3.1.3 is only compatible with a previous 3.1.x installation. Patching an earlier version (3.0.7 and below) will result in a corrupt installation.

Patch 3.1.1 is only compatible with a previous 3.1.0 installation. Patching an earlier version (3.0.7 and below) results in a corrupt installation.

I cannot get this to work. Ive downloaded multiple online versions of Armada 2 as my original copy died a long time ago but nothing works. Even installing an apparent No Cd patch stops the game from even starting. When i loaded an apparent proper version of armada 2 and load fleet ops it wont play as "You need you own CD"

I doubt we will ever see this nx game they are making. I really like this mod but only a few maps are even fun to play on, resources are too scarce or far between in most of them if you want 4 players or more.

Your mod needs updating a lot cause of the ff:
1. Federation vessels are much weaker than the other races.
2. From the specs you've only included. There are a lot of federation arsenals. Such as 'Sovereign and excelsior class can fire photon torpedoes other than quantum torpedoes'.
3. Federation vessels have the ability to use their deflector dish to fire beams and resonance burst. At longer range since feds don't have artillery ships. How come this is not included in your mod?
4. There's a thing called 'refit' Which allows most federation vessels to upgrade their systems. Why only include officer rank upgrade?

FleetOps in this current iteration will no longer be developed. The team's current focus is creating a whole new engine (which they call NX for now) from which they will proceed further, and nobody on the team is doing anything Armada-related anymore.

Wow !
You guys are here ! This is amazing. I've been playing this since its early days.
How goes the progress ? You promised more races or something like the Noxter , the Iconians but all i found was updates and bug fixes and it's been quite a long time

Kudos and max vote from me for you anyhow !

HI, is there a way to have this Mod Design,+
on other mods or original game ?

can you uplouad maybe the "Grafik" Part only" for high resolution ?

From what I guess guys Fleetops will be no more :(

There will probably not be a 4.0 version of the mod but I heard they are working on a completely new engine for the mod wich might be the version 4.0 after all.

Fleet Ops has an active development team who are constantly working to make sure it has the 5 key elements of a good RTS game: 1. Difficulty: Players with a long history of RTS gaming and elite clicking skills can practice and pull off amazing strategies that are at their level, while new players can still enjoy the game without going crazy. 2. Pace: A small-map game can be over in 10 minutes, while a large team fight can last over an hour without players finding themselves at a stalemate. Individual…