Have you ever wondered why the majority of popular games have some sort of zombie mod for them (Counter-Strike Zombie Mod, TES4: Oblivion 28 days later and so on) and when it comes to everyone's favorite Rome: Total War, Google faints and has nothing sensible to respond to the request Rome Total War Zombie Mod? It is high time to deal with this problem!

We want to create a vision of the zombie Apocalypse on the RTW engine in the ancient period (ye! the Greeks, the Carthaginians and the barbarians against zombies!), to create a good mechanism for the spreading of the zombie-virus, infecting and destroying mankind [not just to add a zombie faction that will be able hire zombies].

The Zombie Apocalypse will be "the same as usual" that means that zombies are stupid-infected-undead brain-eaters, same as in "The Walking Dead" series

Thanks for voting and helping Rome: Total War - Zombie Mod on it's quest to become the 2022 Mod of the Year. You are now in with a chance to score some free games from our #modlove collection. Help this mod secure more votes by embedding the widget (or link) we have included below on your favorite sites.

Wars of the Peloponnesus

This article is created to support the Zombie Mod Beta version that is not yet released. However, everything described in this article is already included in the mod and you will see it in Beta.

What is this all about?

The Zombie mod provides a vision of the zombie Apocalypse on the RTW engine in the ancient period. We have created a good mechanism for the spreading of the zombie-virus, infecting settlements and destroying mankind [not just to add a zombie faction that will be able hire zombies]. This article is devoted to explain this mechanism.

Is the zombie faction playable?

Zombies are stupid human brain eaters. The can not use weapons but may still wear some armor.

Yes, there is a great variety of zombies. Moreover, zombie have some AoS (area of spawn): for example, in Italy you will mostly meet roman peasants & zombied legioneers e.t.c; in the east you will meat zombied sparabara & cataphract cavalrymen e.t.c. Moreover, there are zombie animals like dogs, elephants e.t.c. 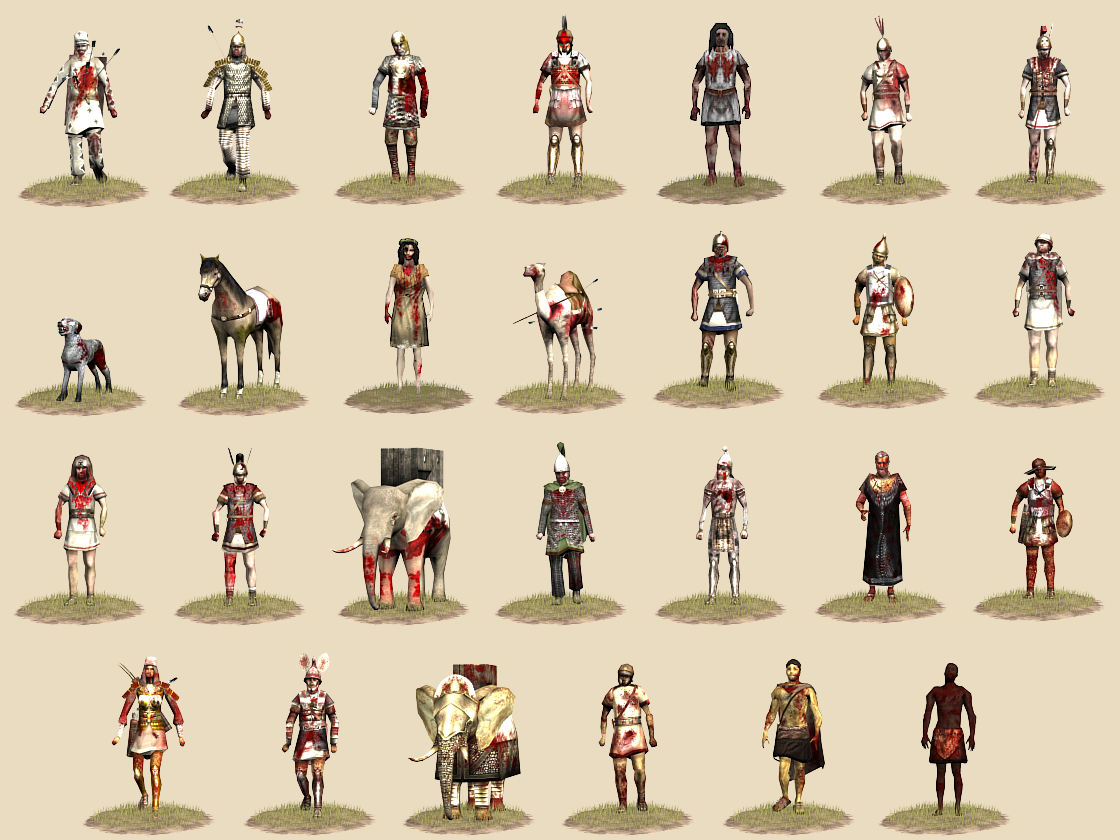 How does the contagion spread?

There are two building in game that are connected to the zombie infection.

This building can and should be demolished as soon as it appears in the settlement.

Settlement gets permanent infestation when zombie capture it (for the first time). This means that region will produce little farming output, trade will go really bad, population health will become low. And, ofcource, public order will be decreased due to the poorness of the region.

This building is permanent and can not be demolished. Do not let zombie capture settlements or will face low income & public order.

There are 4 ways on how does theinfection spreads in game:

When zombie capture the settlement, where the permanent infestation is already exists, nothing happens.

When zombie get close to the settlement (8 cells distance) there is a chance of 100% that settlement gets infected. In this case, Zombie outbreak building will be automatically created and some zombie will spawn near the settlement (depending on its size). To prevent this kind of infestation & zombie spawns, declare martial laws in your settlements (read about martial law below).

Do not forget to demolish the Zombie outbreak building or you will get more zombie spawns.

Each city has a 3% chance to get totally infestated each turn. In this case you will loose the control over your settlement (contagion will own it) and get massive zombie spawn near the settlement.

To prevent your city from getting random infestation declare martial law.

How do I fight the infection?

In the new infected world you are going to face massive zombie crowds. So always keep huge and strong army to defend your borders from zombies.

However, keeping huge armies is not enough to fight the infection. In order to protect your settlements from random infestations, zombie spreading and infected agents you need to declare the martial law in your settlements.

Declaring Martial Law in a settlement has several standart effects:

However, it highly reduces the chances for getting the zombie virus.

You can help us make this mod better

Severals ways on how to help us bringing this awesome mod to life.

Step-by-step guide on how to install the Zombie Mod (on Steam & Non-Steam versions of Rome Total War).

Updated version that includes missing textures! Finally, we have decided to release some version of the Zombie Mod. Installation & gameplay guides ...

Hello, I love your mod!

Two quick questions: Do you plan to add in the Indians of the Mauryan Empire and do you ever want to transfer this mod to Rome: Remastered?

Hoping this mod comes to the remaster, it should hold up performance better with multi-doomstack battles.

Just recently found out about this mod. read that devolpment has stoped.
So not sure if this thread still gets checked by the originaly author.
But i have this weird issiue:
When i load a new campain the loading screen is all fine. but once the campain is loaded the loading screen takes between 1 and 5 min to transfer vagely to the campain view. Moving the mouse has a 20 sec delay, some campain moddels/textures are all over the place while others are just fine.
Im using the steam install and ajusted the launch options but i cant find anyone with a similar issue and/or fix.
if someone has any idea where i could start looking for solving this issue please let me know. dying to play this mod.

okey i got to the point of the campain starting. but it crashes A LOT.
End turn, crash, trying reload autosave, crash, reload autosave again, fine, end turn, crash again. could go on and on with examples of trying difrent things.
would have loved to play this mod, sadly its unplayable. Atleast for me for some reason.

Reinstalled Alexander and the mod but getting a difrent error now:
Generic error
failed to find texture zombie mod/data/model_stat/residences/textures/prometheus_roman_cities.tga

IS this for alexander. It didnt work for vanilla to me :C

I'm constantly crashing for no reason, the Rome Total War has stopped responding thing is the only thing that pops up for me. Sometimes I crash at the second turn sometimes I crash at X amount of turns or I will crash at the loading screen leading to the battle. But when I load the save its not corrupted I can still continue but it's just frustrating to constantly have to reopen the game and reload the save.