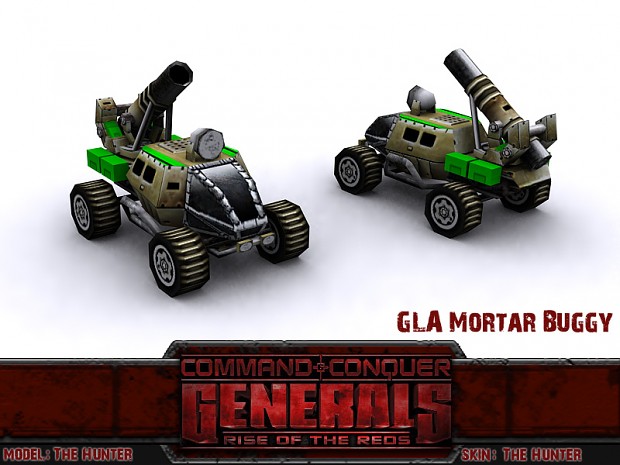 What the lolz? :D i am going to build a lot of these! (do they have really long range?)

Some mods done this already but whole games? Don't think so.
Only game I can recall using this kind of thing is upgraded Pitbull from C&C3.

Greatest idea for the buggy! Looks very nice and detailed, as usual for SWR!

Are you kidding me? This has been used in what? How many mods? MANY. Please SWR, no mortar buggies!

I was reffering to the mechanic of changing between mortar and the rockets...

Oh... Yeah! Wait... switching? Wouldn't it be better if it was an upgrade? Or a general-specific unit?

u love to always complain about everything dont u? xD

Are you gonna say? If you havent noticed, I promote mroe than I complain! From what I have seen of your comments you complain more! Discussion over, want to bash me, downvote my comments or PM me please.

uh.. no u aren't promoting.

Considering SWR has enough resources to make own ideas and models... Mortar buggy is in Contra from the very beginning of the mod.

There were plenty of mods before Contra got there hands on the Mortar buggy. As I said, NOW the discussion is over.

It might not be the most unique idea, but it works. ; )

The execution is different though, as this isn't a standalone unit; it's an alternative fire mode.

heh do it gain salvage update ?

lol, must be Rise of the Reds, quick he doesn't like it bury him under a mountain somewhere!
Honestly I think he's got a point.

you havent tried the mod yet loser! stop complaining if your not sure about what will be the gameplay of this unit mister complainer! so SHUT UP!

Reasoning for the mortar variant is that the shells themselves cannot be intercepted, blocked via PLD, ECM etc.

You will be able to switch between both weapons on the fly and will cater to each situation accordingly.

How can switching 1 weapon to the other possible in seconds?

Especially if they are pretty large? I dont understand it either.

video logic folks it doesn't have to make sense.

how is it possible for a tank to fire once evry 0.25 seconds?in reality it takes ~2 minets to reload if I'm correct

Not entirely. For tank calibres, auto-loaders can reload 10-12 shells per minute. A skilled crewman under favourable conditions could theoretically do a few more. It's still nowhere near as fast as the stuff you see in the game though, and in RL, such stunts are obviously limited by the number of available rounds.

This is different. A tank shooting lasers, or helicopter carrying nukes may not be possible in RL, but is realistic at best. Changing several-tonnes heavy equipment in seconds would require another heavy machinery in factory, which I doubt is an option in the field.

The more logical way would be to make it an upgrade than just switch, like you did with Humvee's MG/TOW. And sorry for this, but even if it would be possible to carry them both, I doubt you can hide that mortar inside, when you need space for driver and engine. You may say "it doesnt matter in video game", but it does, because so far you made things all possible (given there were lasers and small nuke bombs), but this is more like Transformers, who are changing shape and size sometimes.

The idea is good, yes, Buggy sucks in anti-infantry role with its accuracy, but the way it is employed isnt.

You do realise that this might easily be just a heavy infantry mortar? Those things generally clock in at merely a few hundred kilograms, not 'several tons'. If I wanted to nit-pick, I could point out that the entire idea of the Rocket Buggy is unrealistic to begin with; how does that tiny vehicle carry literally -hundreds- of rockets to re-arm the launchers after every single barrage within seconds? It's a video game; please get over it. Your frequent fussing over minor details is getting...tiresome.

The weight is not a problem at all, but more the size of it, how do you want to carry 3-6 rocket launchers AND heavy infantry mortar at once?

"...how do you want to carry 3-6 rocket launchers AND heavy infantry mortar at once?..."

The same way you carry 12 overlords inside a single train car, 3 humvees INSIDE a single chinook, or 27 lava buckets in your pocket VIDEO GAME LOGIC! :D

If you want, you could assume that for in-game purposes it takes several seconds to make the switch, but within the context of the story it takes much longer to do so.

There's no need to fuss over something like this.

Nah, the size is alright, it's just the switching bit

Well, I do see how an animation for this could work, but not the real life deal, but hey who said this had to be real life?

animation idea:
The rocket buggies pods move towards the 'middle line' (line of symmetry whatever) and the one moves to be on top of the other making a cylinder, and voila! you have the mind blowing mortar transformation!

In regards to the tank reloading, have any of you heard of 'vacuum fire?' A teacher I had once was a tank gunner in, first, the M-60A1 Patton, then the M-1A1 Abrams. When they had to eschew precision for volume fire (read 'More Dakka') they would enact vacuum fire where the loader simply jams the rounds into the gun breech and hope he doesn't get his hand caught in the process. It is very dangerous and has resulted in powder casings (the proper term for the shells, btw) getting caught by the breech and jamming the process.

As for the GLA's tanks it could be said that they ghetto rigged a system for rapid fire.

How can buildings be built so quickly? How can all those vehicles fit into a War Factory? It's a video game, just roll with it.

Ballaieyyyyyyyhhh! *misfires and looks around* what the-*BOOM* oooh look did you see the infidels faaaaaacee...it's gone now but did you see his faaaace?

O.o ummmmm well then looks like that wasnt as funny as I intended lol...sorry if i offended anyone

T-shirts for everyone! *Angry Mob cheers*

f**k logic, this is awesome.
at first i didnt like how both GLA artilery used rockets, but this makes the buggy unique.
however, if you guys can make a sistem that makes it more believable and makes it more unique it would be greatly apreciated.

I think that a better idea would be to give this particular unit to a specific sub-faction, but I still love it anyway!

Mortar? Well, not original, but at least it's more plausible than fitting 20+ rockets on a tiny Buggy.

Remember it's only a weapon switch, doesn't permanently outfit the vehicle with it! You can switch back at a cost of some time only.

GLA Buggies have recently become capable of fielding mortar cannons with an ingeniously improvised self-loading mechanism that allows them to adapt to any circumstances at hand. The gunner riding shotgun with the driver is in direct control and requires the assistance of the crude targeting computer to calculate the arc and trajectory of the projectile to ensure optimal accuracy. Samir and Amir, two brothers who operated the same Buggy, took credit for the invention. "Those imperialist Chinese dogs just kept sending more and more waves of infantry at us." Amir commented. "That's right, brother! Sometimes we'd fire a full rocket barrage and kill only one of them at best. But the issue is that hit-and-run guerrilla tactics are supposed to be ammunition-efficient." "So me and Samir here showed up the next day with our beloved mortar. Well, let's say the Chinese have to send their cowardly aircraft at us now. But at least we got rid of the old problem, right...?"

What this means in simple gameplay terms is that GLA Buggies in 1.72 will be able to switch between two fire-modes: The familiar rocket barrage and a mortar which fires single shells at a slower rate. The shells produce greater individual damage with a splash effect on impact, but can't hit moving targets reliably. As such, the Buggies are now able to combat a wider range of ground targets more efficiently if you micro-manage them correctly. Do consider that switching between the two weapons takes several seconds during which the vehicle is unable to defend itself though.