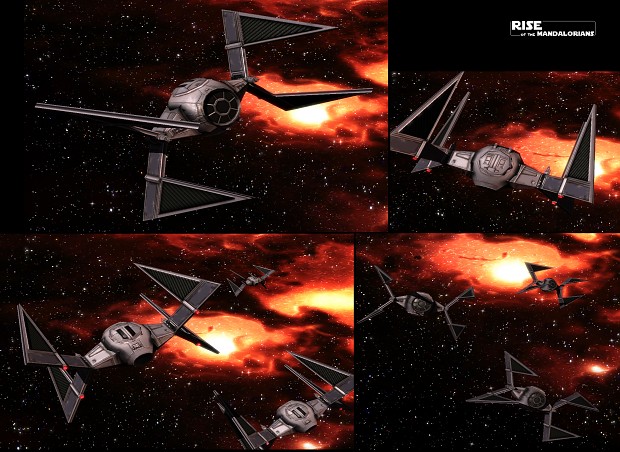 I've always wondered how they're supposed to fit all that hardware into such a small fighter...I suppose, really, the design wasn't made with that in mind.

Anyway, I've always liked the look of the TIE Hunter, fighting a bunch of them in Rebel Strike was always fun.

Well the TIE Hunter is especially puzzling because it's meant to have shields, ions, torps, hyperdrive...the works... And yet it's solar panels are far smaller than any other TIE unit. So where does all the power come from that it would need for it's sleek upgrades?

Made with essence of Superman I guess...

Could be they discovered better batteries or capacitors. Or did indeed improve upon the solar panels. These clearly aren't meant to be expendable, which would explain why the tech didn't transfer to the standard TIE, which is more than expendable (somehow).

Deflector shields aren't so bad, as they did make personal ones that clipped to a belt. (I don't think they made personal hyperdrives. Then again, I'm only a casual fan, so I never really looked into the lore.)

Torps would be a matter of limits, and it looks like there's room for a couple in those triangular things on the sides of the cockpit.

Good points all around and correct. As for hyperdrive, they come in all shapes and sizes depending on class. Smaller classes have lower hyperspace speeds and so forth. I'm entirely unsure what class this TIE might have but given the space restrictions, its likely low class and slow. Its power requirements might also limit it to short hyperspace trips, as opposed to galaxy-wide jumps. Basically, it would just use it in a quick retreat, to jump to the next closest system.

Good point. On another note, the actual ion engines are moved to the wings. Perhaps that left more room for a hyperdrive system (and/or more batteries or something).

Maybe the solar panels only power the engines and the rest comes from an internal batter of some kind? Who knows?

Oohh...didn't think about that. If the panels are efficient enough, maybe anything that the engines don't need is dumped into the internal batteries.

Well, that was actually kinda fun. Even if it's literally just a bunch of theory.

Solar panels or not, TIE-types would need an onboard power supply or they wouldn't be able to operate in deep space where not enough power would reach the panels, so it's likely they all have some kind of onboard reactor.

Those are not solar panels but heat radiators. So they have an onboard reactor.

You have to figure each panel has two sides, so if you added up the total surface area, the panel's are about the same size as the normal TIE/ln

Nice, i'm looking forward to using these. And by the way, how is ground going? We haven't seen much of it recently, anything new?

Well both Imperial Shuttle types have been animated for landing use as well so they were technically both space and land updates :)

Strictly ground-based... I'm working on a model for Kueller and some other heroes. I have finished refining the code and mechanics for the new Lancet and lastly, I am working on some ideas for an artillery replacement for the SPMA Walker...because it's technically a Clone-Wars unit and I don't like it. I've thought about using the Imperial artillery from Galactic Battlegrounds but it's really...boring to look at.

Eeew gross. I hate it. Lol.

So will these be transports for commandos then or just fighters spawned from the escort carrier ?

Their transport unit in GC mode will be the Commando-class Escort Carrier:

These escorts will have one squad of TIE Hunters each, which deploy out of their hangar.

Now, this is only aesthetics but in land battles, several TIE Hunters will swoop down and land, when the actual Commandos themselves are deployed into a reinforcement zone (instead of a Lambda shuttle).

That would interesting to watch, certainly not to my knowledge has that been done in a EAW before and btw Keep winning at this model making business, every picture is just pure visual bliss

Most people don't bother but it's really no different than any other transport type. The only thing is that your landing model has multiple, animated parts but otherwise...the same.

Basically the four TIEs are saved in a single model file, all animated individually. Not sure if that makes sense...

Glad I can get you your fix though.

Edit: Aww now that's funny because when I got the notification that you replied, you said my pics were "visual heroin" but you edited and now the "fix" comment doesn't work. Lol

If there was any imperial fighter I would fly, it would be the Tie Hunter. Fell in love with the fighter when I got to fly it during the Raid on Fondor in Rebel Strike.

Yep, it's a sleek fighter for sure :)

When i see these high quality models i wonder if you are going to redo some of the bigger ships aswell or if that is just too much work. :)

Yep, every ship gets a makeover :)

Ohhh. Thats grand news. :)
If i may make a suggestion it might not be a bad thing to make ships a tiny bit smaller to among other things help with navigation and to have a better overview without resorting to the scroll up function, it might also be an idea to give ships more hardpoints. <shrugs> :)

Ships will be made as close to actual scale as possible...navigation and gameplay in mind :) And yes, more hardpoints with functional turrets when necessary. Trust me...I go big or go home. Lol.

"Go big or go home"? More like "Go big" since you don't seem willing to "go home" until you've revamped everything you can possibly revamp short of making a new game.

And ironically, I do the work all from my home... I'm not sure how to feel anymore. Lol

Now that I'm down replying on other people's comments:

Not sure if I liked this TIE design. Any like I do have for it is definitely colored by how much I like the X-Wing, given the general similarities in appearance.

As per...every other model you've redone...this one also looks rather awesome.

Its not my fave TIE but I do like it. In any case, it does have the Hunter feel; it lives up to its namesake.

This was one of my favorite fighters in Rebel Strike because it could basically do anything lol. Great job on this.

The TIE Hunter was designed sometime prior to the Battle of Endor, for exclusive use by the Storm Commando Corp; an elite branch of Scout Stormtroopers that participate in very risky special operations across the galaxy.

Ferried around by the equally exclusive Commando-class Escort Carrier, these TIEs and the Commandos who fly them are covertly deployed from their carrier behind enemy lines.

Once the TIEs have infiltrated a secure perimeter, either quietly or by force if needed, they enter atmosphere and carry their deadly commando pilots to the surface, to complete the second half of their dangerous missions.

As for specifications, the TIE/Hu was designed to be versatile and to operate independently of a carrier ship when needed. The designs were heavily influenced by the X-wing, making the TIE/Hu the first of it's series to have an s-foil wing system. The TIEs are equipped with shields, hyperdrive units, and enough supplies for several days of loitering in space. With regard for the type of missions it's typically deployed on, the TIE Hunter also comes equipped with two ion cannons in addition to the TIE Fighter standard, dual-laser armament.