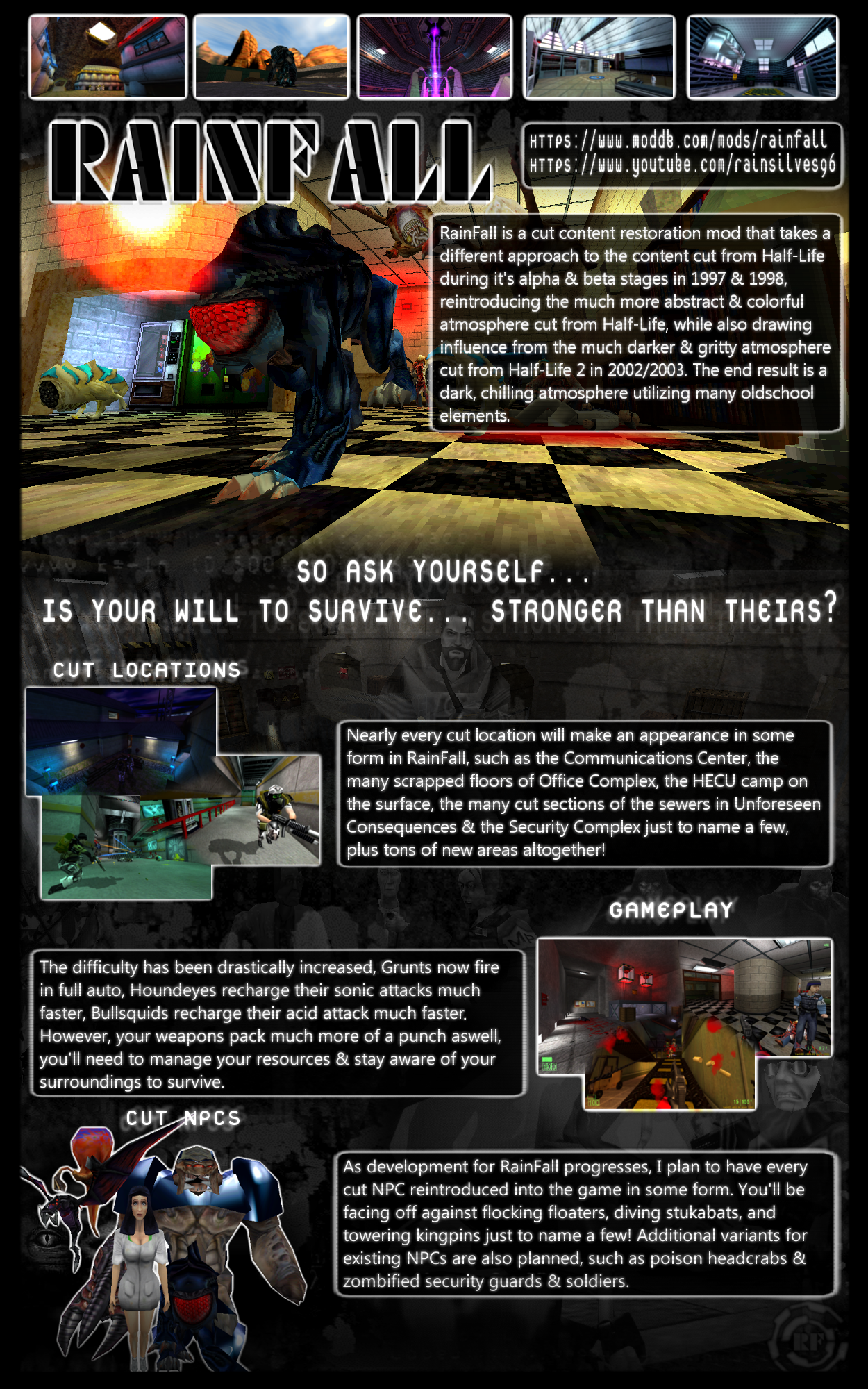 "So ask yourself- Is your will to survive... Stronger than theirs?"

The original premise of RainFall back when I first began, was to simply retexture the original assets and add new entities to the original HL1 maps using ripent. However, it soon became clear that this wouldn't be enough to accomplish what I wanted. I decided to take the mod in another direction, using many different methods, I've been able to decompile & fix almost all of the maps in the original Half-Life into actual editable source files, using the Half-Life: Source WC mappack leaked in 2003 as a base for many of RF's maps. Using these map files, I plan to reimagine the entire original Half-Life, combining many cut concepts & ideas left out of HL2 & HL1 to create a dark, chilling, & unique atmosphere.

A release date is unclear at the moment, but a (albeit, extremely outdated!) demo featuring 3 playable levels is down there in the downloads, collecting dust. Christ I need to replace that article...

When RainFall is released, I plan to ship all of the source files for everything along with the mod, reckon I oughta give back to this community some way!

Thanks to all of the following, seriously I love ya'll to death.

Xyus - Doom 3 model ports, no longer in use but still I appreciate it.

Magic_Nipples & Freeze as a whole - Helping with coding, sprites, & much more

In loving memory of Leanne Wilkins 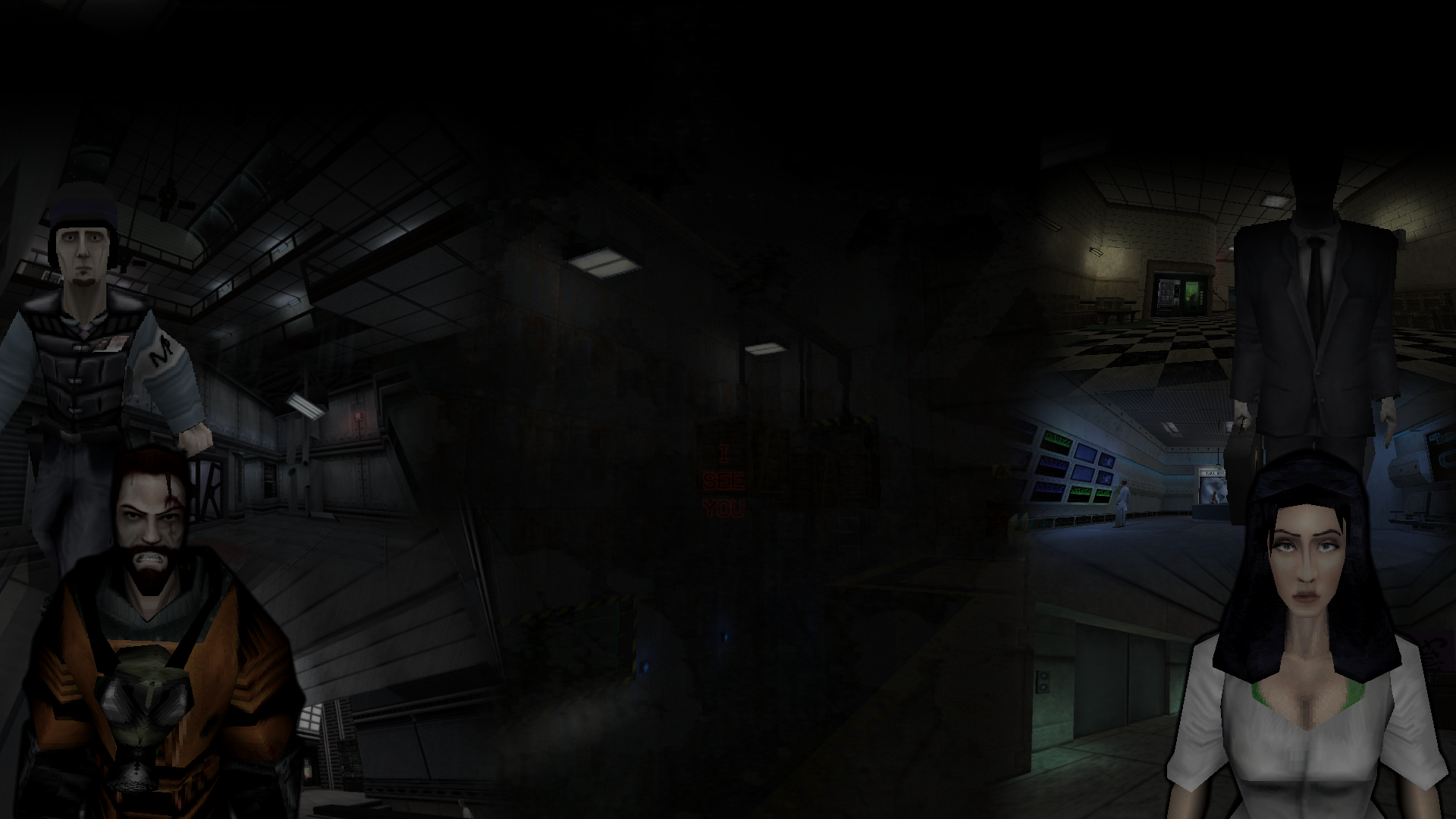 I need a break.

I'll get straight to the point.

I need a break.

With every day that passes I feel more & more stress & guilt over RainFall and how I'm not working on it, just leaving this ModDB page sitting unupdated for months, hundreds of people depending on me to deliver on this thing when I just don't have the passion or time for it right now.

Since the end of last year I've been down in a hole that I haven't been able to dig myself out of, and in this time I discovered something thats funner to work on, and a better creative outlet than RainFall ever has been for me in the years that I've had this project. It got to the point that I found myself working more & more on that while RainFall just sat here, the thoughts always in the back of my head "You need to work on this thing, this is the one people care about. You need to finish it and release it. You have to, you have hundreds of people depending on you to do this. Force yourself to do it if you have to. Whats the matter? Gonna be like every beta mod ever and reinforce that mindset that they all fucking die? Wheres that massive update you promised months ago?" you get the idea, its been keeping me up at night. Its even gotten to the point that I'm genuinely scared to make a separate ModDB page for this other project out of fear for people being angry and coming down on me for not working on RainFall. Actual work outside of modding devouring the vast majority of my freetime & slowly breaking my back isn't helping very much either.

If I'm going to work on RainFall, its going to be with passion and dedication. I can't say that I have that for it right now. So, untill that comes back to me, I think this is for the best. This thing is stressing me out too much and I just need to get this weight off my shoulders. I want to make a ModDB page for this other project so badly so you all can see what I've been doing for all this time.

I'm sorry if I let you all down, I feel like I let everyone down by not doing this sooner. Please for the love of god don't hate me for this (though I can't say I don't blame you). I promise, even if it takes years, I will come back to this and properly finish it. I just need a break, I need something different. I love each and every one of you so much for sticking by my side for the nearly 4 years I've been developing this mod, you have no idea how much that means to me & it warms my heart every time I read all of your kind comments and see all of your support, its whats kept me going all this while, and I hope it continues down the road ahead.

I'll see you all soon hopefully. Leave the light on for me.

I've been working on revamping Anomalous Materials for RainFall, and I've made a Discord server for folks to join.

The RainFall demo has been released. Two versions are available for download, and several extras are included.

Compared to what the mod is now, this is extremely old & does not represent the current state of the mod. I'll still leave it up for archival purposes...

Compared to what the mod is now, this is extremely old & does not represent the current state of the mod. I'll still leave it up for archival purposes...

I'm worried about this project more than my own :D
And would you like to create a team so that it continues to develop this mod? Or do you work alone?

Forget what I wrote, your style is unique.

this mod looks like it could've been better than even absolute zero is!

P.S do you think you will ever release what content was created for this mod? (if you don't return to it at any point in the foreseeable/unforeseeable futures)

i'm gonna see about releasing the development archive for it after i'm done with the Starlight demo, i may try to do something to go along with it, if & when i get down to sorting through it all & getting it ready for release, i'd keep an eye on HLAZ though, its gotten further than any other beta recreation mods & it has a fully playable day one released!

but it needs more people,said in update 6.5

i do too sometimes, i always look back on it & know that the experience i got working on it is what made me who i am in terms of modding today though, without rainfall i wouldn't know squat about modding, and the library worth of knowledge i have about cut content heh

one of these days maybe :)

Hi! Just checked this mod out. Hope you're well and not stressed-out on this mod right now.

if you want to see what i'm working on currently, check out my other project here:
Moddb.com

Half Life: Aliens vs Predator Half-Life