Note: requires zdoom not gzdoom Ever wondered what Punchout would be like if it was in 3D? Well now you can find out just how different it is than you might think. Dodge heavy blows, duck swinging punches, perform heavy combos on your opponents, and even train with doc! This wad contains all of the opponents from Mike Tysons Punchout and Punchout with Mr. Dream, as well as extra characters, such as Gabby Jay, Masked Muscle, Rick Bruiser, and Aran Ryan. Then, when you've defeated all your main opponents, fight the ones again who dare challenge your title. You have two attack types, pressing one will make you punch up, while pressing two will make you punch lower, the default. Tired of just being in the ring? Fight against your enemys on the streets in the secret level. and At the end of it all, you'll have to take down the most powerful boxer Mike Tyson. Note: You must run this in zdoom to work, because gzdoom messes up the weapons. This is a fangame and is not from Nintendo or offical

Punch-out is one of in my opinion one of the best Nintendo games out their. From the Arcade to the Wii, Punch-out has always been an exciting game, with knocking Glass Joe down as fast as possible, or nearly on the edge of you seat after your one knockdown away from a TKO on the current champ, it has always been a intense, pattern filled boxing game full of action. Their was always something missing though. One of the main reasons Punch-out wasn't that realistic was because you never really got too move around. Sure you could dodge all day, but you could never chase after your opponent, or lure them in for a KO. You could never back off either, you would always be standing strait in the face of your opponent. 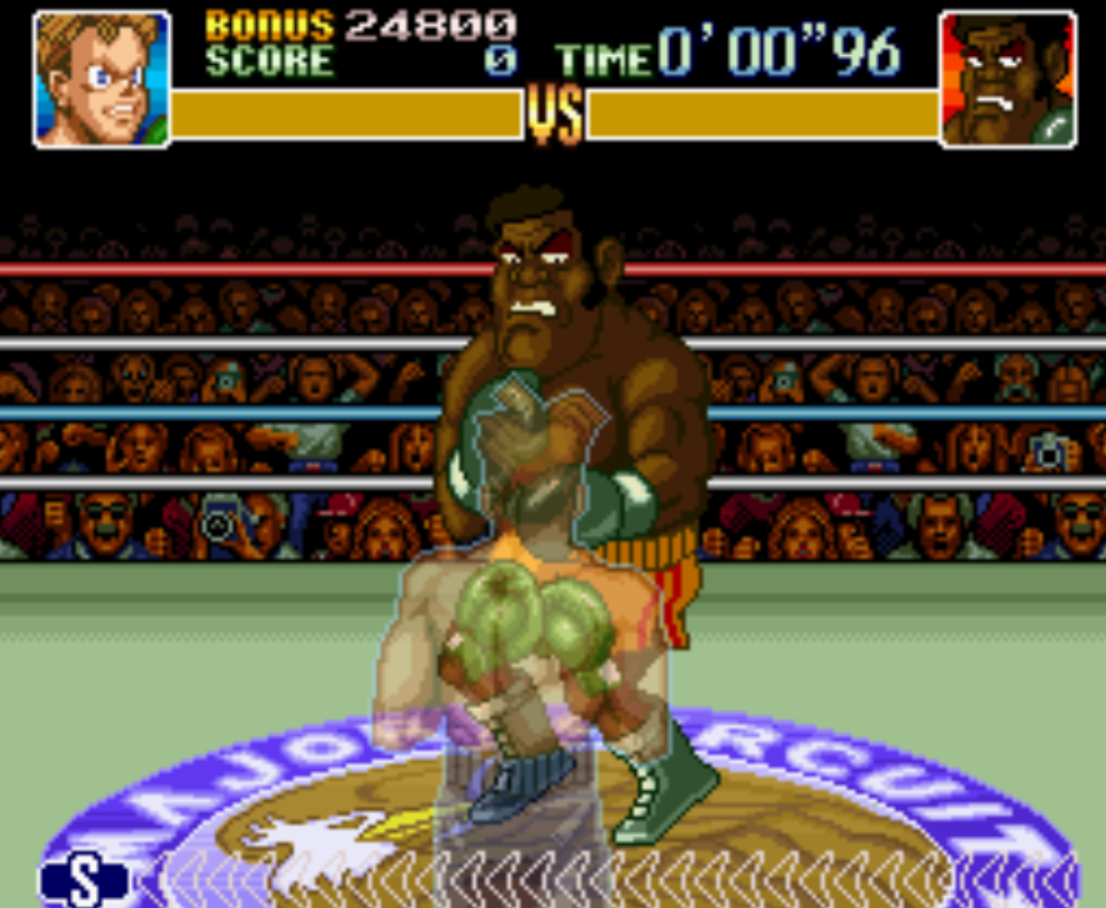 You also could never see your opponents fight each other, Leading to much speculation about how Piston Honda was under Don Flamenco, and other similar cases. So what if there was a mod to fix this? No not a Rom hack, but a mod of a game with a 2.5D Engine. A game easy to change. A game, like doom, with infighting and full control over the character. Doom has melee, and it's been refined heavily with mods such as brutal doom, Rogue Like Arsenal, and even on Realm 667. Their was even a boxing ring of Punch-out NES in Vanguards Secret level. 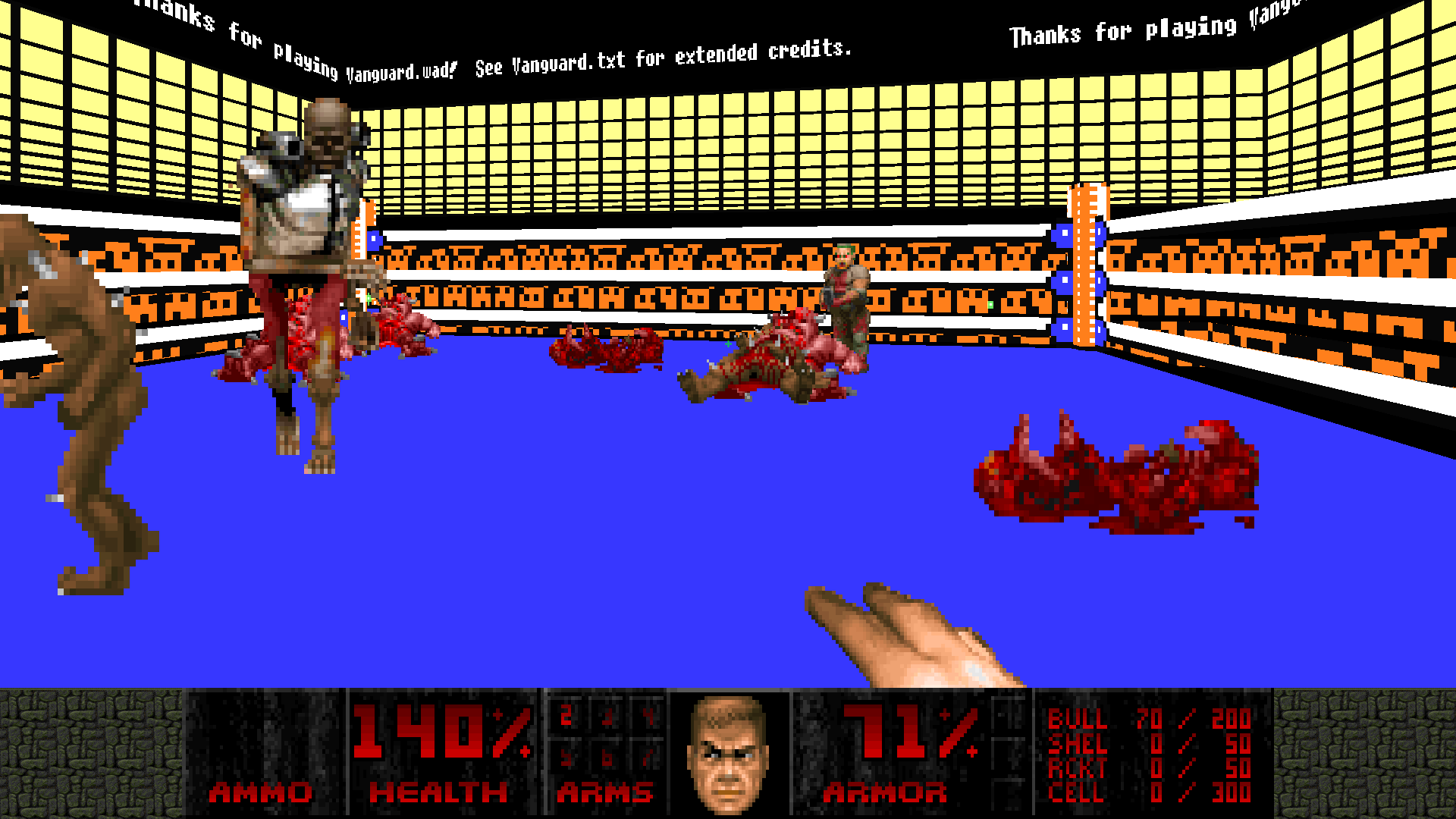 So I decided using vanguards boxing ring as a start as well as brutal dooms fist sprites, that I was going to work on Punch-out doom. I started with the Pinky Demons code, and started to edit it as a boxer. Now I had a monster that looked like Glass Joe in Vanguards modified boxing ring. It was kinda fun, but it wasn't great. I was a heavy doom modder, so I knew some acs, and I knew I would need it. I added Mario, originally there for decoration, and two different versions of melee, one for body blowing and one for jabs. With alt-fires using right punches, and having one due an uppercut when pressing reload at the write time. Then I started working on Von Kaiser, as my main goal at that point was too see two other boxers fight each other. He was pretty much the same as Glass Joe, except with different animations. I then had them fight and it was pretty interesting, and since I liked the idea, I started to add more fighters, pretty much in order of how the game goes. After Bald Bull, the 3rd fighter, I started to work on Mario, and boy it's harder than you think. Sometimes he would count once the opponent got up, some times he wouldn't stop counting, sometimes he wouldn't know when somebody got KOed or TKOed, and sometimes he would do nothing.Once He was done, I started working on Don Flamenco, Gabby Jay and Great Tiger. I wanted a way to record wins and losses though. Wins was easy, as it would just update after every win. Losses were a big pain in the butt. You see when you died I had a script that would either restart the level or send you back a level. However when you die, and change levels afterwards, you lose all inventory, so losses and wins would not be kept. I also wanted to permanently get rid of respawning, so the player could face their failures, and so enemies could do victorys. I fixed this by making the player have the buddha property, which means their health can't go lower than one, and have an acs script that makes it zoom out and make the player motionless, as well as giving him a fake death state. It also set the opponent to do a victory state, so they didn't punch you while you were fake dead. I turned this off with the Revenant secret boss. 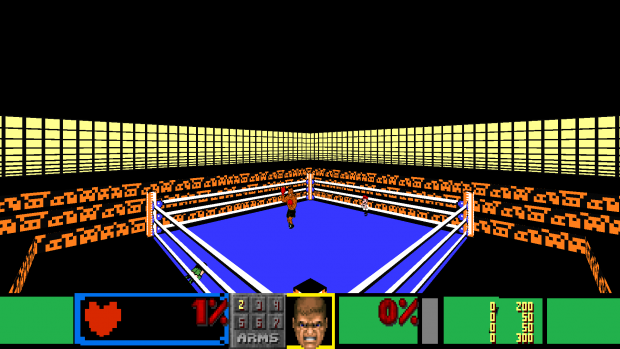 I also got rid of save states, so the player could not cheat matches. Afterward I was just working on fighters for my other maps. One of the cool things I found out though was that because I replaced the Vanilla monsters with the boxers, that they would be in the doom maps. It would be so funny to pull out a chainsaw on king hippo, a Super shotgun on Piston Honda, or a BFG-9000 on a couple of Glass Joes. That got me inspired to use that concept as my secret Level. All in all I had a ton of fun making this mod, and I hope you guys continue to play it. Thanks for the support. 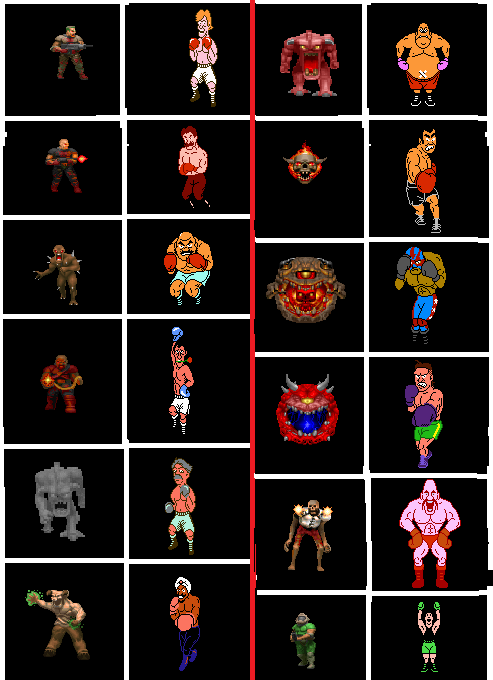 Note: requires zdoom not gzdoom Ever wondered what Punchout would be like if it was in 3D? Well now you can find out just how different it is than you...

I like a lot the mod, but I found some bugs. Like:
Sometimes, an enemy freeze and if I not punch him he just stay there withouth moving
In the levels where two enemies are fighting (I really liked that idea) You can punch the enemies while they are fighting, and they can punch you if you are nearby
And the last thing, is that for some reason, the hands sprites (when I walk) are a bit gitchy.
But is still a funny mod and a nice idea :D

Thanks, I will work on those bugs for the next update

Nice! I am waiting to the next update :D

these problems are a little more troubling than i originally thought they would. I will keep working on them, but they are currently still not fixed for the next patch. I will let you know when they are fixed.

Nice, keep up the good work

The Way Of The Sword Mount & Blade II: Bannerlord