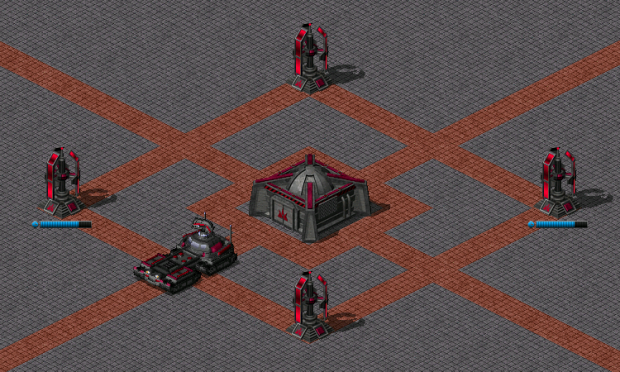 Will we see the old Technology Vault units in any way then?

Possibly in future but right now they are not available in any way.

what about the tank in this pic?

That is the Blackout Signal Inhibitor.

Glad to see the old Durandal voxel didn't went totally unused. Shame for the other three tho. Did you try integrating them to the respective faction's mainstream tech trees?

Possibly in some way in the future. As they were, only Svarog could potentially have a place since other units cover old Equalizer's and Hyperion's roles (Coalition Liberator AMOS in particular is almost literally same as Equalizer, only without anti-air).

Capturing a Crimson Crown Technology Vault, which are usually defended by base defenses or other means, grants commanders of any of the factions in coflict handful of new tools to play with.

As long as they retain control of the Vault, have a vehicle factory and a laboratory building established - a commander can construct one, and just one at a time of Crimson Crown's ace in the hole - Blackout Signal Inhibitor. As the supreme mobile information warfare weapon, Blackout will block targeting of enemy superweapons and support powers over a large area in it's vicinity, jam any enemy radar structures and captured Satellite Centers as well as reveal cloaked enemies over larger distances than other sensor-equipped vehicles or infantry. To defend itself or it's general vicinity, it is able to direct a jamming signal to any enemy unit or base defense which is susceptible to electromagnetic interference to stop them from working.

In addition to Blackout, they can deploy Prototype Disruptor Towers anywhere on the battlefield. These cause disruption in enemy communications that shroud the area around the towers from their view.
As a prototype, the effect of these towers is not as potent as those of the regular variants constructed in Crimson Crown installations, and in addition they are expected to malfunction catastrophically after certain amount of time, resulting in destruction of the tower regardless of it's condition otherwise (this 'time until destruction' is shown as a blue timer bar under the tower itself).

Development Note: The Technology Vault used to grant three distinct vehicle units, one per each faction, instead of the Blackout. Most of these vehicles were proven somewhat redundant in testing and thus abandoned in favour of a more fitting information warfare unit.