In a time where the Empire's grip on the galaxy is still tenuous, take command of early Rebel luminaries or the Emperor's closest advisors in an epic struggle to define a galaxy still smoldering from the Clone Wars. Assemble your faction's war machine from dozens of asynchronous lines, then augment it with hundreds of potential upgrades. Transform aspiring heroes into legends to provide intangible leadership to your military and government. Leverage entire planets and civilizations to their greatest potential through base building. Then, when everything is in place, plot your conquest vector. This is a four-decade strategic simulation of warfare across 120,000 light-years.

Nearly five years ago, I put out a mini-mod that featured ships with factual armaments and starfighter upgrades. In the time since, my solo project grew to involve a core team. This release offers the first glimpse of playable land combat, yet the differences with the original could hardly be more pronounced - this is a much better effort, precisely due to the people below. It was a grueling development cycle, so thanks to everyone who gutted it out. It paid off.

If you've previously installed other mods, make sure they haven't put any files in XML or Scripts folders in EaW\GameData\Data and FoC\Data. PR v1.2 is fully compatible with other mods; it just looks like certain mods are incompatible with us! 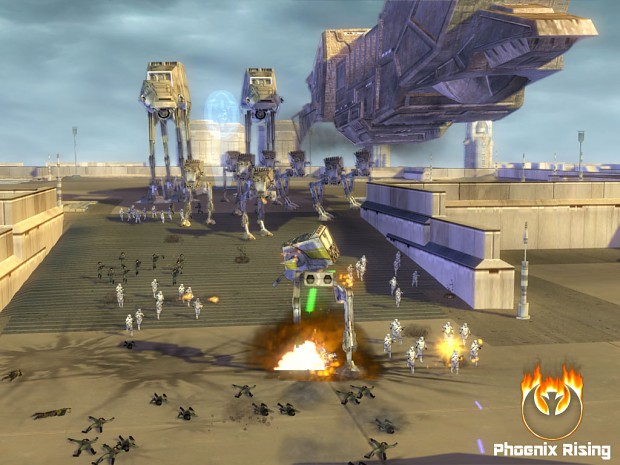 OMFG OMFG OMFG!!! THE 4 YEARS WAIT IS OVER

how lucky am i. just discovered it and the new version comes out the same day sweet!!

i still remember the days of the mini mod.....
very cool mod indeed

anyone know why gamefront keeps crashing my internet saying it was recovered then does it like 3 more times and says it cant connect to the site anymore? I cant get anything from there anymore. what happened from it downloading straight from moddb?

the modb download button only says download from gamefront, which crashes my internet on all of these mods now :(

Me too the thing will not let me go past the home page.

took forever but I got my PSP to download it. Sucks I am gonna have to do that with every mod now :(

I believe it is something to do (MAYBE) with Adobe or something. Update anything you have or get Google Chrome :P

I don't have a PSP, and I still mod ST Armada II and SW EAW. Gamefront keeps crashing on me too. Even the homepage does what you all are describing. Anybody know if Gamefront went under? I wish they'd give us at least a week to dowmload all the mods before they shut it down.

None of the ships Fire..

you cant get reinforcements in land skirmish

Land Skirmish has been disabled for now.

Chandler when I play the ships on Skirmish dont shoot... Theres just a big blob of ships the only thing that works are Tractor beams

Please go to our forums at Forums.revora.net and post detailed information about the problems you've been having. We can't provide proper tech support here.

umm, am i the only one with getting an exception on the loading screen (Where it says "Loading..." in blue letters in bottom right?)

No, you're not alone. Unfortunately.
But if you will make sure there is no XML or Scripts folder in the FoC Data folder (the data folder is in the same place as swfoc.exe) IT WILL WORK as intended.

but without XML/scripts the game doesnt run. They are in my swfoc/data folder, ihtout it nothing from the game works...

Hey guys! FANTASTIC! Waited years for this and it is finally here! You all deserve medals and a pat on the back! :DDD

If you're experiencing crashes and you are using a 64-bit OS with the Lucasarts patch, please download the compatibility patch.

I downloaded it and am getting a different crash.

this is f***ing cool

the v1.1 in skurmish the ai did not attack or if i destroyed one fighter i would of won the game

the ai isnt building anything in space skirmish

very fun game! cant believe how much work went into it during the time between releases. GJ PR team.

Hi =) I'm having a few doubts about the installation.

I also wanna ask were is paste XML, did you not include it?

You don't need to overwrite 1.1 unless you're running out of storage space, the installer will put 1.2 in a separate folder.

What do you mean by paste XML?

Thanks for the help =) I install the game and it creates a paste "Data", inside it has art, audio e text and three files, megafiles, config and maps. Once i tried to play the game crashed so i downloaded the fix patch. I've tried again and this time it didn't crashed but the game was incomplete, i saw some menus etc but no ships etc etc. So i went to see the paste of the mod and i noticed that by comparison to other mods and the original game itself and even with the old version o PR, it misses some pastes, one of them being the XML paste. I hope I've been clear in my explanation, give me some feedback please =) hug

I see. The XML files are in the config file. I'm not sure why the mod is running but not working 100%. The patch you download should have created an XML folder in the Data folder with the two files that are in the patch.

Yeah i believe you but what now? Can you help me? Could you create another way of installing the game, like in a RAR file?

That won't make any difference. You might want to try reinstalling EaW and FoC.

can this be put on desura?

Hey Chandler on GC when the game gives you an option to begin battle or auto resolve when you attack a planet, I sometimes can't choose neither of those options because there unit icons over the buttons, which blocks me from clicking the buttons. Can you fix that plz.

That's not a mod bug it happens in any mod or normal if you have to many units.

Hey chandler what is your email address so I can send you the screen shot of the bug?

I some tiems like to play with the xml files if i get bored, like making my fav ships buildable in a couple of seconds. But i could not find them in the download would you be able to tell me how to find them? also to state teh obvious this mod is great.

got linked to this mod from the PETROGLYPH FB page... will try it out.

HELP. every time i start phoenix rising it crashes it does not do this with republic at war or any other mods

Im completely lost as to how to install this.

I have EAW and FOC, both updated.
Ive installed all versions of pheonix, Space, 1.1, and 1.2.
I used the 1.2 shortcut and it gives me a parsing error.
I'm lost on the deletion of these XML's and scripts, the only XML in my phoenix dirs were the megafiles xml. And why would there be anything of this in my EAW directory at all if im installing this on FOC?

i like your game very much but are you going to do more with it or is it finished now?

i installed it correctly but when i launch it it says its having perception or something troubles and fix to that?

guys i got got a little prob when i satrt the game after 5 seconds of loading it crashes what should i do ?

Does it work on windows 8?