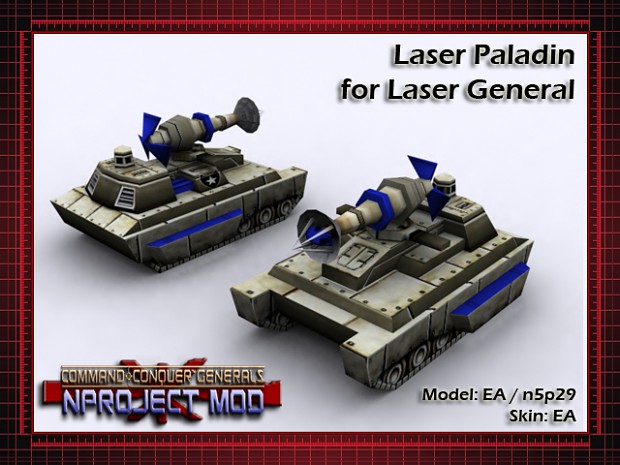 Will the Main/Vanilla Factions also get their own improvments?
Like new units only for the main factions?

well, there are already some new units available for vanilla factions, but there might be no exclusive units for them. well, that's why they called "vanilla" faction. :P

The model's good, but in my opinion, the focusing dish on the front just seems a bit cliched, maybe you could alter it slightly?

I'm following the original design of Laser Crusader and Laser Turret model style. that's why the turret looks like that. :P

better than the one made by SWR

its realy cool, especialy the ability, i've always wanted the lazer general to have more than just the lazer tank. but at the same time i wish there where a default lazer unit for US, its almost like the lazer general pops all his lazer weaponry out of nowhere while all other factions already had the weapons and strategy that each of theyr generals focus on in the original faction, like the toxin tractor and the toxin general.
i think it would be cool if the US had a lazer tank of some sort from the start besides the crusader and paladin, and the lazer general has an improved lazer tank and a cruzader and paladin with lazer abilityes but still with cannons.(i was thinking the paladin would have the lazer ability you guys made for it and the crusader would be upgraded to have a lazer instead of a cannon while its lazer weapon will still be weaker than the lazer from the lazer generals improved lazer tank).

oh and just so that the lazer tank isnt redundant when the crusader has lazer weapon, it can have an electromagnetic shield tha reduces the damage that your units which are close by to it would take from atacks. ^^

Finally I got this unit free from the old borrowed ShockWave model.
Even look similar with the their model (maybe because the turret shape), I made this from the scratch. I hope this new model have more "paladin feel" in it.

I've also planned to give Laser Paladin new ability: Charged Attack.
Instead firing a stream of laser, Laser Paladin charge the laser for a short time, and firing it in one big blast. It have higher damage, larger area of effect, and longer range. However, the tank only can use this once a while due to barrel overheating.
This ability is a nice addition for Laser General as he don't have any artillery.