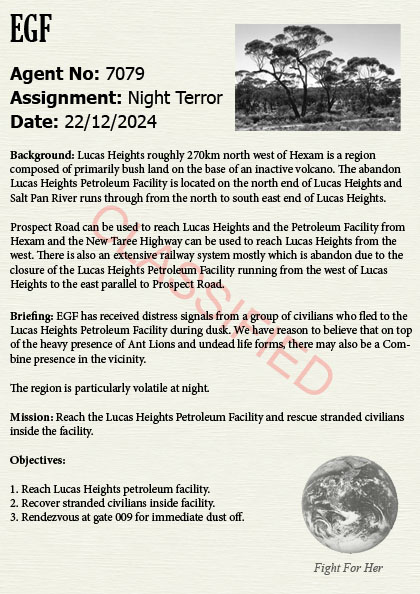 Night Terror Is Back

After a brief hiatus (due to other commitments), work has once again begun on Night Terror and I'm super excited!

Over the next few weeks during my school exams, I will be reviewing my plans for Night Terror and refining the direction this small singleplayer experience is heading in then work on actual level design and content creation for the mod.

I won't be releasing any new screenshots at this moment although it is tempting, but instead I'll just reiterate over my plans and goals for Night Terror and hopefully give some insight to people who may be interested in Night Terror.

What is Night Terror?

In Night Terror I will be focusing on quality and not quantity (unless where talking about the quantity of quality). The plan is not to create a long experience but a compelling, highly polished one.

How long will Night Terror be?

I'm not exactly sure at the moment, but you shouldn't expect to get any more than 20-30 minutes of gameplay.

Back in 2008 I had conceived of a grand plan for Night Terror involving the player driving up mountainous terrain to reach the facility, the player entering deep into the facility and an ending to the story.

As with most of my ideas, I get carried away and aim for more than I can achieve. I have cut back on many of my ideas with great difficulty and chosen a small portion of my idea to flesh out.

There is the possibility for work to continue on Night Terror in an episodic manner, much like Minerva.

Why is Night Terror going to be so short?

Firstly, it's difficult for an individual to create a long singleplayer experience especially with such an emphasis on quality, in the Source engine and most other modern FPS engines at least anyway. I greatly admire all those designers who have somehow managed to do so.

I also have many other commitments and life in general which leaves me little free time. I would love nothing more than to be able to work on Night Terror every day and see it reach that initial idea but it just isn't possible.

What can I expect from Night Terror?

You can expect a high quality short singleplayer experience which includes fun gameplay in nice environments with great ambient sound.

When can I expect to play Night Terror?

I would like to see this project released before the end of the year.

What is this ‘commitment' that caused development on Night Terror to pause?

I was working on a Flash game for a school project. Once again, the game was probably too ambitious and I was working in a tight deadline.

How committed are you to finishing Night Terror?

I'd love to finish it. I'm extremely pleased with the development of Night Terror and have high hopes for it; I think this will be my best level design work to date!

Unlike some past projects, motivation has remained relatively high.

Do you really have screenshots of areas we haven't seen?

Yes, a few. But because this mod is so short I have to be careful with what I show as to not spoil the whole mod.

Thanks for taking the time to read the above information or at least this part. Stay tuned!

I haven't posted any content since I announced this mod on ModDB but rest assured, the development is going strong but perhaps not as fast it could be.

I would like to announce that I have positions available for work on the mod. If you are a talented individual who would like to do some work for this...

Huh, the download for this is no longer available (It was on filefront)

Wonder if it'll be put back up, I wanted to play it again.

Hey, I just played the Beta for this you released on PlanetPhillip. It was excellent! Superb level design and very creepy atmosphere!

The mod is looking really good. I'm so glad to see this kind of quality around. Keep up all the great work !!!

Nuh mate. I've put this mod on hold until maybe May or early June so I can finish another project I'm working on for school.

I didn't post it here because I didn't think it was a big deal if I paused development for 3 months.

Rest assured, I'm very pleased with how the development of this project is going and I'm determined to finish it!

I can see this mod in moddb.com too.
Me and aaron_da_killa are from the www.snarkpit.com