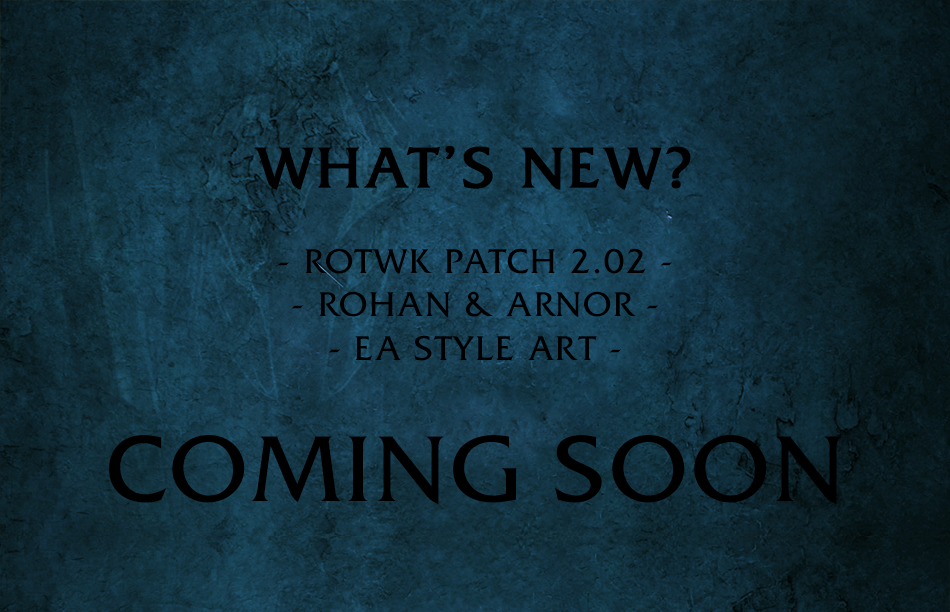 Long time no see everyone. First, I should say I apologize for the long hiatus. It has been 3 years since the last update and 3 years since I basically dropped off the face of the planet. During that time I figured out that college is a lot harder than I originally thought. However, that said, I decided 6 months ago to take a year off. Now that I have settled into a pattern for work and I know more so what my schedule is like, I have more time to dedicate to modding again. That said, a week ago I started modding again.

Well, I am a little bit rusty, but I already have a plan in place. The current state of the modification is poor what with the patch changes and the difference in the community compared to a few years ago. That said, the first big change is essentially to scrap everything that was released 3 years ago and move the entire mod from being stand alone to being a ROTWK 2.02 Modification. This was not an easy task. However, it has already been done and it has a modular design so that when new patches come out it will be easy to upgrade the mod.

The modifications main goal remains the same, to complete Rohan and Arnor the way EA intended them to be completed. Rohan has already been readded to the game, with some needed bug fixes from the first release. Arnor is currently in the works, one building is already complete and you should see an update within a week for more details on that.

I know it sounds lame, but remember, this modifications goal is to complete what EA didn't in ROTWK. That said, we are sticking true to this style and we are currently working incredibly hard to make the Arnor Building style be unique but also nostalgic.

Lastly, I would like to say that it is not just "I" anymore, however, it is "we" because at the beginning of this past week I reached out to some fellow mod creators and I have put a small team together to keep the motivation alive and kicking. We look forward to sharing with you what we have been working on. Thank you for the comments and reviews over the past 3 years and the few private messages I have gotten. They were not in vain and we look forward to keeping you updated and or seeing you in our discord.

It is my pleasure to announce the first official first release for stand alone mod...

Update in regards to the Sneak Peek vs. Actual Release and other miscellaneous content.

This is a fixer that will fix basically any issue one may encounter including but not limited to: 3:20 Autodefeat, Not launching, and other issues.

This is the MEE Mod CD, it is needed if one does not own ROTWK.

It is my pleasure to announce the first official release for stand alone mod The Lord of the Rings, Middle-earth Expanded

Hi guys, I'm new on this world of moda. How do it work, this mood? I'd like to play it

Hello, war of the ring is working with this mode?

Firstly, could you tell me if you are planning on separating separating Elves out into Imladris/Lothlorien/Mirkwood and possibly Dwarves too?

Secondly, will this be compatible with 2.02?

Thirdly, why did you choose to separate Arnor/Gondor instead of group them under 'Reunited Kingdom' or 'Two Kingdoms'?

Fourthly, with the factions that are separated, will there be any new units/buildings (I would imagine so since Rohan for e.g. would be pretty barebones)?

Tyestor Rohan was already mostly completed by EA, Arnor was also separated by EA as well. New buildings for Arnor, MINOR building edits to Rohan. Rohan will have some new units. Arnor will be completed in EA style. Meaning, simple graphics etc. The mod will be 100% compatible with 2.02. We have no plans on separating other factions at this point in time.

i actually like that the graphics arent super amazing, because now I can finally play a mod on my 2004 PC

The Desolation of Arda Battle for Middle-earth II: Rise of the Witch King