Lost Dragons is a multiplayer total modification aiming to bring out a new thrilling gamemode for Arma3 . Our concept is futuristic objective based team warfare with randomly generated map elements to ensure every game is a unique experience with completely new set of units, weapons, structures and terrain. 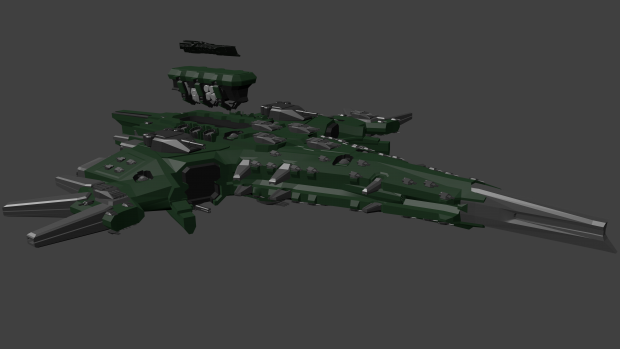 This is seriously looking like a sweet mod, just hope my PC can cope with awesomeness... ;)

Thanks man! I hope that too.. xD So far so good, but it may explode when we add all the details..

Can we have a screenie of this ingame, in flight, from the ground? Wallpaper material :D

All in good time. :D Its not quite yet ready for taking it ingame.

Beause of course it will get interior, corridors, control rooms and some awesome sh*t (reactors and hangars) to blow up, isn't it ?

Yes it will :D The whole shabang! No point making it that big otherwise!

So I quite liked the AR-42 revision.

This is GLORIOUS! Quite the fine job representing the dragon theme in my opinion.

I do feel it has one too many turrets aesthetically speaking however, but hey if the desire was to provide as much dakka as possible mission accomplished.

Thanks Para! :D Great to hear you like it!

The turrets are not set in stone as they will be attached as separate objects so the amount may change. But as you said goal was to make it the biggest and badassest ship ever!

For a little variation I've done some more work on the Dragon Ship and also a thought came in to my mind that while using the Warrior class battleship as a control unit sounded like a great idea, I've decided against it because the plan had some holes in it.

The Warrior ships have been around for a while and the Dragons represent the pinnacle of technological advancement so it does not make sense to use the old ships as control units. Thus I made a new ship to fit the role!

This releases the Warriors to be used as weapons (If one can get one to work) and makes the planned progress of the gamemode a bit more straightforward.