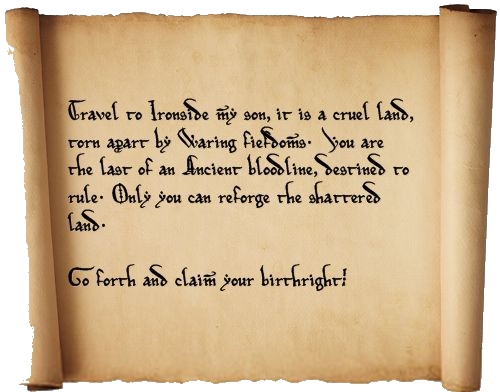 Forewarning, I am a coder and modeler, I am not an artist though and I have had real trouble making the textures, and some of them were too detailed slowing down the game, so I had to pixel-ate them a bit. So if you have complaints about the textures, then I am sorry, but its not really my area of expertise.

The bulk of the development for this mod has been completed, so I am starting a code freeze, there will be no further new features for the first release. I am now focusing on polishing in the content to make it as bug free as possible. Remaining Tasks

Moddb.com
Some swords in the game come from the above OSP pack.
Wheene

Armoured Horses/half Cat/Yes More Horses Are all by Wanderer
Author: textures put together by me- Wanderer949
Author: and the mesh and texture sheet is by Njunja
Author: wanderer

All other new weapons and Armour I made from the Base Mount and Blade Warband models or Custom models I made by hand.
All of the new textures are from Cgtextures.com.

History to the Mod

1247 years ago the land of Ironside was under the control of a monstrous race of creatures called the fury. They ruled over all beings from humans to giants and even the Weregan's of the marble lands. They keep us as slaves to build their castles. The Fury realised the value of human intellect and got them to add their voice in there councils. That's when a man named Ohm convinced the Fury that a great wave of water was coming and that the only way they could survive was by hiding underground. The Fury believed Ohm and moved all there race into a great underground city and the fury went into and eternal hibernation, only when the great city door opened the sunlight peered in they would awake. As a precaution the Fury brought Ohms Family underground with them to ensure his loyalty. However Ohm made the ultimate sacrifice and left his family die in the ground with the Fury so mankind could be free.Ohm then built a huge fortress around the City doors and placed a permanent guard there. All the Solders were made swear an oath to forever defend their fortress from all who threatened them. Be it solders or Kings. No one was allowed enter. Ohm called them the Fredan's. Ohms Brother Kane soon raised high among humans as a great warrior and he quelled all the other races like the Fury before them except for the Weregan's. So Kane Built a great wall to keep the Weregan's in the Marblelands.When all the other races now served humans their numbers were quelled to ensure loyalty. Kane rose to be the first king of Ironside. He built the City of Pella to forever house the Kings of Ironside and for 1000 years humans' reigned supreme. They built many great cities and forts. However the eastern part of Ironside was largely ignored by the Kings of Pella as they grew Fat and worthless. So under the command of General Titus, the east rebelled. With the entire eastern army and Kane's fortress in the mountain valley made them hard attack. So the current king, Kane the 16th gathered all the army's of the lowland, the highlands and the costal cities and marched for the east. When they reached the Fredan's western fort of Sin, the Kings army was not allowed to enter. The King was so furious he ordered an attack on the fort. The seige went on for three months. The Fredan's had a self sufficient empire behind there walls. When the king realised how futile his attack was he finally swallowed his pride and marched south to the other great mountain pass of Rigrain and was unopposed by the men of the mountain, when they reached Kane's wall the rebels were waiting. The Fool king kane the 16th's entire army was destroyed by the Dragon solders of the east. The rebels let the king live and he returned to Pella with his honour shattered and he died a failure soon after the rebels declared themselves a free empire called Rebela. For another 100 years east battled west, it left the once great Pella weak. When King Kane the 19th was murdered along with his entire family it left the once great line Kings broken. Pella was in disarray as everyone pressed their claim to the throne. General Trollack of the Southern Highlands left the city with his whole garrison and returned his home of Bluetern and renamed it Trollack and declared himself King of the south lands. His army occupied all the forts along the Devon River, putting a wall of men, stone, water and steel between him and the north. As a result Lord Serkot Sat on the throne as a Steward until the rebels in the south had been quelled. Seeing their chance the lands of the north all declared independence from Pella. This left the Land of Ironside completely shattered and for the next 147 years the lands of Ironside have spilled each other's blood with no end in sight....

This a basic tut on how to use TME(thorgrim map editor) for creating a map for your own mod. Im not saying this is the right way, i just couldnt find...

Very small patch file. It is however non save game compatible sorry :( Just unzip and copy paste over your existing Ironside folder. Sorry for any inconvenience...

Release Of Version 1. I am sure there will be bugs. I will fix anything game breaking or annoying. Just post the bugs on the page or the forum WITH steps...

Wanting to play this mod, though Ive heard some bugs are an issue. :(

I have some free time on my hands and have decided to try and fix the existing issues and make some enhancements. ETA unknown...

took you long enough to respond (by the way, this is not Swifte)

I just started a new game and recruited dune recruits from the town and the recruits are invisible please help.

Once you start walloping a few enemies with the Trollack battle rod there's no going back - best cavalry weapon ever!

This is literally the worst Mod I've tried with M&B. Seems no matter where you start you get taken prisoner. In 16 attempts I haven't managed to even get to a village to recruit help without getting jumped by soldiers. With no money to by gear or enough soldiers to even survive. The smallest attack came from 28 enemy. Pointless. I like a challenge, I don't like pointless.

Thanks for your honesty

This is an amazing mod, one of the best I've seen. I really like the new weapons, armors and factions. It's funny how people always want freelancer, but the beginning of this mod is DIFFICULT. Personally, I like the challenge of starting a party with low money and tough bandits. Tons of fighting and some nice role play retained from Native. The factions are really balanced with large armies and sturdy garrisons (no factions eliminated as of day 325). It reminds me of an early Crusader mod I played (Crusader SS-SD); overall a bit better I'd say. My only suggestion (for both) might be to boost player party size a bit faster to match up with enemy armies, but I haven't tried campaign easy, I prefer campaign normal (recommend the following settings to all relatively advanced players: C Normal; DP 1/2; BS 150; DF Normal; CS Fastest; 107% overall).