Wind of the War

Here，I recommend a great mod to you --- the Wind of War
It's a sub-mod of Custom Commander made by Chenwz，but it have a foreandafter change. the world of the mod is Europe ，North Africa and Middle East.
As you now，1453，it's a begining of the new era：
“Mid Age End，and The Renaissance Begins.
War，war，never change，and never...
From the Western Europe to East，the War keep going and never stop.
the Renaissance，it's not only the renewal of Art but the dawn of martial revolution.
Even the Middle Ages is end，but the wind of the war is just begining.” 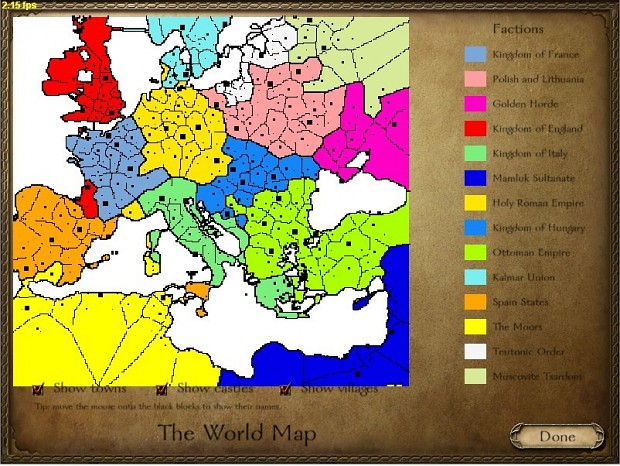 Features:
Many historical items include horses，armors，weapons and firearms8 new high-level NPCsuse the codes of Custom Commander（many but not all）add the codes of Diplomacy
add the PBOD——Pre-Battle Orders & Deployment and make some continuations.the PBOD include many functions such as shield attack and bodyguard...
The author make many troops based on historical troops（but not all，he is not a historian after all）
develop the born system，it will decide the relationship of some party，and some more influence of some functions.

develop the town and castle
there is new military architecture，you can cost to recruit automatic.you can even enlist high-level troops in high-level barracks.and there also are many new economic architecture，so you can get more tax.
special skills
most high-level troops（include the noble ，NPC and special troops） have own special skills.these special skills can change the battlefield sometime.Of course，the player also have special skills，but player only can use one skill in the same time.And the skill have some demand such as born ，character skills
difficulty level
the mod have 4 levels of difficulty level，you can change it anytime.in different difficulty level ，the party size of enemy ，tax and lord’s income will change.
the Badge systems
player can get all kinds of badges（most of them are trophy）the badges can exchange good items which are unsell and hard to buy）you also can use it to gamble and strengthen your bodyguards.
the change of arena
go to arena，player can use own weapons and horse.player also can give more ante（and a special ante，when you win，you can get a random item）.the member of arena also change.and every turn，if you win，the relationship of your partners will upgrade.
the change of Real sword fighting
the prize depend on the number of kill.and the member of the fighting wear light armor.If you want a premium fighting，you can enter a random scene and use random weapons and fight with random enemies.and when you win，you can get random items.
you can loot people in towns
when you succeed，you can get items and money but it will reduce your honor.

This mod also has many more functions，I can't piont everyone of them.it is very popular in China，so，I hope you can like it.

wind of the war

there is a bug when you enter the castle room, you go flying

I have run-time error every time... what other thing I need besides this mod, for it works fine ?... or, for what warband version is this?

Single Player
Tags
Embed Buttons
Link to Wind of the War by selecting a button and using the embed code provided more...