It is said the Empire of the Septims was born when a man became a god by conquering a whole continent. Among those who opposed Talos were the Bretons. Those vanquished in the battle of Sancre Tor did not all join Tiber Septim. Some fled his domination. Led by Grégoire de Sistre, they founded a new kingdom, New High Rock, in a remote area.
Shadows blends with light in the fate of this land. Noble knights serve tyrannical lords; learned enchanters hold conclaves in high towers while necromancers plot malevolent schemes in dark vaults; paladins and priests fight horrors spawned by the Old Forest. Here, ancient legends are still alive and mingling with new epics.
In his castle, an old king worn out by years of feudal wars witness his reign’s twilight. Who will wield Saarthul, the sword of Grégoire de Sistre, to restore glory and unity to the kingdom of New High Rock? Will you be the next king? Or will you only be one more name on the long list of victims of the War of the Broken Sword?
“I Am the King!” will make you travel in an immense region between Skyrim and High Rock in which dwell numerous wonders and dangers in its vast cities, castles, woods and dungeons. Overcome its perils and rise to the kingdom’s elite by sword, magic or scheme in a setting blending Western Middle Age and Elder Scrolls lore.
RSS Articles 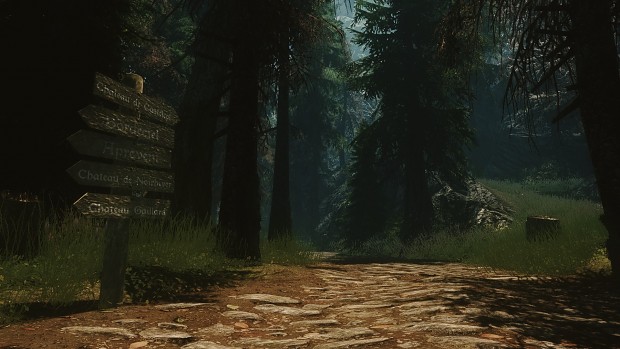 Tomorrow, in partnership with the Mundus Bellicus forum, we will begin exploring the Penthiver area at 6 pm.

Together, we will explore the region where the story of "I Am the King - Chapter 1: Penthiver" takes place.

Prepare your hiking boots, the road will be long!

5 years since Skyrim came out, and after all this time, we now want to share with you an old project. With some other news and informations, we want to...

A fan always expects, and he is right, to test the product, the mod. Even if there will be some delay, he is now able to estimate the release date of...

One of the main criticisms that could be made about LRCM was certainly its unrealistic ambition. In order to move forward and allow ourselves to finish...

On the Internet sphere

To those people loving lore, history, literature, or just reading something, your desires will be fulfilled, as you will be able to learn more about “I...

This is the first show case of some armour which will be available in the mod "It's Me The King". Here is a partial plate armour worn by some rich robber...

not a single piece of news since a long time ago but the page got updated some time ago so anything new?

When it's finished... which is hypotetical at this stage.

I don't mind if the mod is dead but can you release the mod as it is like the guy who did CangLoong City (though he released it on a Chinese website). It's still fun to explore the towns and cities even if its empty, a few armours and weapons would sweeten the deal.

I waited for over 5 years for this mod and literally just found out it's dead... This makes me very depressed and so angry because this was literally the 'this is it, this is my dream' mod, that i was going to set aside a freaking week for and play ceaselessly until it finally became stagnant... it's so sad to finally find out that i'm the last person to know it's gone and not coming back... I hope that maybe, just maybe, they'll at least release the unfinished version or something...

I would love to utilize the Medieval European house resources. I pray someone still has them. Would it be possible for someone to release a modders resource pack for this or email them to me?

If the project has been abandoned, it would still be amazing if they would release the *unfinished* version of the mod to the public. In that way all the hard work the developers put in wouldn't have been for nothing. Maybe someone even picks up the mod from there and completes it (although that is unlikely).

To everybody who are waiting this mod, I have unfortunately to announce you that is no more being developed, since at least one year.. I wish it was coming one day or another but that's not going to happen..

Well? Its been a few months since you said we would get an update/upload. Is the mod dead

No frequent updates is the sign of a mod author who's not in good modding spirits or is too busy to work on this project. It takes no time to let people know what's going on but there has been nothing here for a while. The mod is dead.

Hi! Actually it is nearly dead, but I will make a update to let you know how we will continue. Probably we will publish the mod in its actual state and see if modders can join us to work on it. Otherwise it will be dead for sure.

How about you see if you can merge into Beyond Skyrim?

Single Player
Twitter
Tags
Embed Buttons
Link to I am the king ! by selecting a button and using the embed code provided more...