"In a futuristic world, a strict regime has eliminated war by suppressing emotions: books, art and music are strictly forbidden and feeling is a crime punishable by death. Cleric John Preston is a top ranking government agent responsible for destroying those who resist the rules. When he misses a dose of Prozium, a mind-altering drug that hinders emotion, Preston, who has been trained to enforce the strict laws of the new regime, suddenly becomes the only person capable of overthrowing it"

The modification is loosely based on the movie "Equilibrium" with the main focus of the work being based upon implementing a new combat system similar to the "gun kata" seen in some of the action scenes of the movie. The "Gun Kata" allows the player to take on several adversaries at the same time with dual weapons and gun them down in unison, much like what we see in the action movies of today where the hero wields dual handguns and shoots at different targets with each hand. This sort of stylish gun battle is what you can expect to see once the mod is released to the public.

The mod's focus is pure action and style, if you like shooting enemies and gunning them down in the coolest way possible then this mod just might be what you've always been looking for!

So first of all, allow me to introduce myself. My name is David Rico, and I am the project director for Rebirth. Of course, seeing as this is an indie game, I also wear many hats, such as 2d artist, Particle Effects creator, SFX guy, Animator, and Programmer. Mainly though, I am a programmer so most of my posts will likely revolve either around that, or around progress updates as new features are added to the game.

Some of you may have played the last thing I released to the public, a Max Payne 2 Total Conversion titled "Hall Of Mirrors". HoM was a conversion based on the movie Equilibrium, focused entirely on the implementation of a stylish combat system similar to the one seen in the movie.

Anyways, since then, I sort of had to buckle down and do a bunch of Real Life stuff, ending with me currently working as a Software Developer during my day job. At night, my job is managing the wonderful team trying to bring this game to life, as well as coding and internet-yelling at people to get work done. Mostly coding though, owed to the fact that we have a great team full of dedicated folks who somehow manage to juggle work, RL, and working on this game in their offtime, unpaid. I cannot say enough about the team.

Now, enough about us, let's get down to business!

Let's start with the basics. If you want of an idea of what the game will be like, you may want to read about some of the games and works that influence us as developers. Here's a short list of games and movies/books that influenced us:

You may look at that feature list at the top of our page and say "Egads! These guys are crazy, this isn't an 8bit sidescroller!"

Yes, we are all too aware that this will take a lot of work, and have already scoped out most of the project, and are actually nearing a single player prototype. Yes, it would be far easier to go "oh we're indie, here's an 8-bit zelda throwback clone with some zombies and stuff" and call it a day. But I personally don't really think being indie means we get to skimp out on art. Yes, we don't have anywhere near the resources someone like Epic may have, but the graphics must fit your game, and our game's theme is gritty, dark, and dangerous, and 8-bit graphics and cubes just simply aren't very threatening, at least not to me. You can only do so much to make a cube skinned like Cthulhu look threatening. 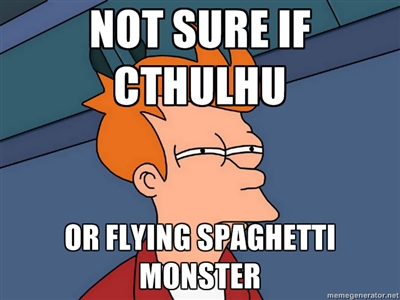 I have a pet peeve. I hate people who announce stuff as soon as they think it up. There's nothing worse than hearing about a game or movie, and learning that its 10 years away from becoming a reality. In addition, being the realist that I am, I also know that the majority of indie games/projects die a horrible flaming death within the first few months when inexperienced people learn that yes, making games is a lot of hard work, and that no, you can't be an "idea guy" unless you have a ton of cash to throw at people.

As such, I come with good news. We didn't just start this thing a week ago. We've been working on it for a few months already, went through an engine switch, restructured the team, and all the joys of indie game development. We are now working steadily and adding new features as well as art every week and a lot of core gameplay systems are in prototype stage.

We will talk more about this later, for now just know that we are steadily making progress and have set up internal milestones, the first being an internal proof of concept simple prototype, to make sure the gameplay ideas we're throwing around are sound, and fun. Nothing sucks more than finding out your game sucks after two years of work, right?

Any game with RPG elements usually has a GUI and inventory of some sort, and we are no exception. I have some interesting ideas on how to do the GUI for the game, but for now, we needed a prototype to test all the systems related to your inventory. As such, I put my sub-par art skills to work and quickly wipped up an inventory window, some item icons, and a HUD to use for development. I expect a lot of these will change later in development (I am even considering not having a HUD at all and letting players know what's happening by looking at their character). Anyway, just keep in mind these are very much a WIP as we are not even at alpha stage yet: 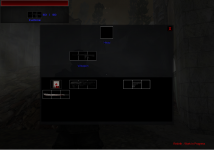 In the picture above, you can see a few things. First of all, I toyed with the idea of having a grid for your inventory. I quickly shot the idea down, after remembering how much I hated grids in inventories. I much prefer an UO type inventory, where you can just throw stuff into a bag and you are limited by carrying capacity, not "space" like in Diablo. As such, expect to see us use some sort of inventory that lets you carry anything, up to an X weight max, determined by your stats/character.

In the current iteration of the inventory, you can simply drag and drop items from the bag into your equipment slots. Dragging a rifle into the weapon slot, equips your weapon, as you'd expect. Dragging it form the equipment slot to the bag, unequips it.

You may also consume items by right clicking them. These may be food, water, health, etc. Ammo is simply held in your inventory and used up by weapons as needed, currently. More complex systems may be implemented later, but for now, simplicity is key while we prototype our gameplay.

Looking above, you see our health bar and equipped item bar. Like I said, I'm toying with the idea of removing these later on, and allowing you to see how hurt you are based on how bloodied your character actually looks in the game.

Anyways, I hope you all enjoyed our first post. I know its fairly verbose, but I figured that since we sort of just popped up a few weeks ago, people may be interested in knowing more. Expect me to update this more frequently. I'll do my best to showcase features as we go. After all, isn't the beauty of indie games the fact that they're mostly transparent?

Until next time, please tell your friends about us! Nothing inspires us more than your support!

I am working to reunite the Hall of Mirrors team again for another modding effort. It is my hope that the quality of our next release will not only match...

Well its been a good while and I'm not sure if anyone is still watching this. But essentially, life has taken a hold of my time and has rendered me unable...

It's been a while since we released HoM to the public. After quite a bit of well deserved rest, the team has started to discuss the possibility of...

Hello everyone, As some of you may already know, HoM has been entered into the Independent Games Festival modding competition this year. We are not sure...

The modification is loosely based on the movie "Equilibrium" with the main focus of the work being based upon implementing a new combat system...

A video showcasing an intense gunfighting scene from the Hall of Mirrors mod.

How do you use the swords in the original story?

kotaku posted an article about it and mentioned the mod

This is really cool. I like it better than MP1 kung-fu mod!

GUN KATTA
YOU CAN NEVER HAVE ENOUGH KATTA

I loved the movie, love the mod!!