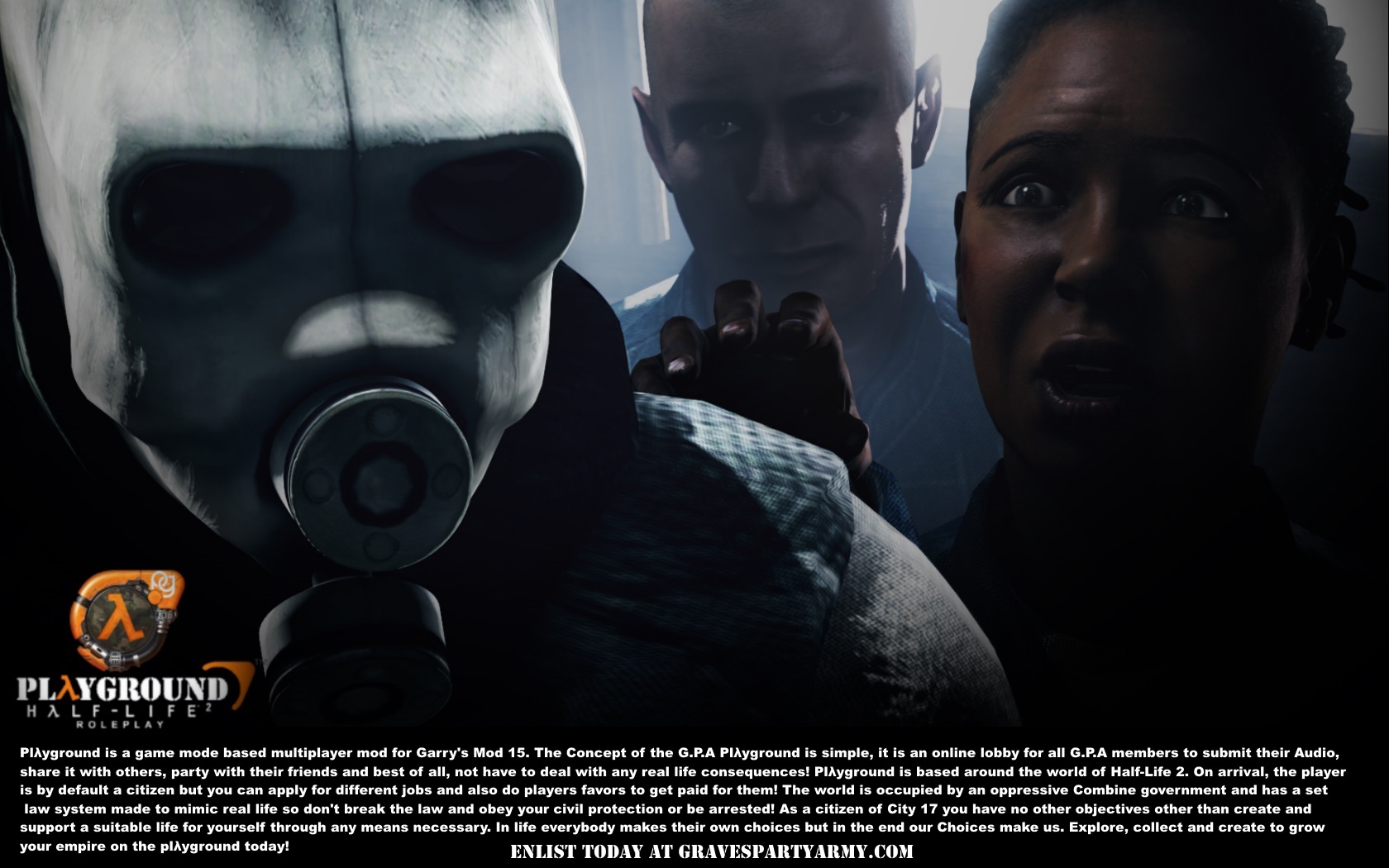 Playground 3.0 is the next unreleased version of Playground, all previous versions have been discontinued. Playground is a half-life 2 role play project unlike any other, it is a stand alone gamemode developed for players who want to create their own playground severs or connect to an existing playground sever. The goal of playground is to deliver the most realistic half life role play experience to the players on our network while leaving room for the player or host to change and integrate any specific addons, missions, weapons, npcs or items he or she may want to add to complete their specific playground sever.

The latest version also adds new maps, items, and tools all based around the original Half Life universe. For more information read our articles here:

Playground has many added RP elements aside from traditional Dark Rp such as custom NPCs including merchants that will buy and sell weapons, items, ect, and the features you'd expect in a co-op rpg game—such as HUD way points and built in bank accounts are all packed in.

We have a "full-release" version of it up and running, and are planning to release it at some point this year. Like our Facebook page below to see what we've been working on, and get instant notifications on updates, features, and more.

"Playground is designed to be a platform that gives the experience of the game running in a whole new engine with many new dynamics." - Mike Graves.

Playground 3.0 is under development. The new version contains over 500 various additions and changes. More to be announced soon!

Playground now uses ATMs as well as cash in game and has a new system for handling small bank loans.

Playground is both an online and offline gamemode for Garrys Mod where our community can play, grow together, and listen to our audio via ☆ Graves Party...

If you want to check out playground 2.0 you can support the project and we will gift you access, its only $10 to support our team! All supporters will...

Download Playground V 1.1 No donation required, although its only $10 to support our team! IMPORTANT!!!: Remove your current garrysmod folder and then...

This is a [G.P.A] Playground windows media player skin so you can listen to all your favorite G.P.A Mixes in style! To use open the folder and run the...

Web page and download links are currently down for maintenance! We will be back up and running shortly, sorry for the incontinence! This mod is NOT DEAD its still under development ;)

I understood everything about this mod, except for the first few lines. What do you mean GPA members have a lobby to share audio and to party and what not? That is not part of the game and just the lobby? What would be the point of that? I am confused. Then again most things from Garry's Mod I do not understand. The rest of it with the gritty feel and just trying to survive day to day sounds interesting though.

The G.P.A stands for Graves Party Army, it is an entertainment organization that I operate and we give out free copies of Playground to all of our customers from the events we throw so that they can play together and grow our community :)

Links are currently down! will be back up by first of next month!

HAHA your telling me! Really wish I could but its really hard to be able to get stand alone rights. Mabey one day Garry Newman will let me use his game in combination with my game mode as a stand alone. *fingers crossed*

I love this game me and my friend have been playing this for as long as I can remember him working on it! Glad to see it's final out to the public! Have fun guys!!!