Napoleonic Wars is a multiplayer DLC (Downloadable Content) expansion pack for Mount & Blade: Warband featuring the last years of the Napoleonic Wars. Experience the thrill of Napoleonic warfare first hand - Take part in the invasion of Russia or fight the French at Waterloo from the front line! Side with one of the six supreme European powers from the era and choose from and more than 395 unique units to play. Fight on the battlefields of one of the most accurate and detailed Napoleonic war games ever!

Battle Cry of Freedom is now Free To Play (Sorta) 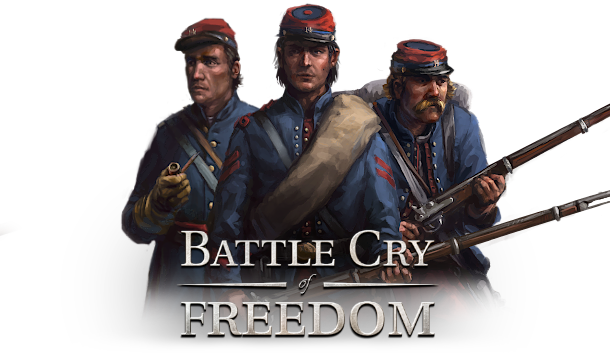 Hello there everyone! With the Steam Summer Sale currently going on you'll now get a chance to play Battle Cry of Freedom for free!

Although the Demo will not be time-limited and allows you to play for as long as you want, it will only include a select number of playable classes. These classes will be limited to the Enlisted and Officers of the 13th Virginia and 20th Maine, plus the Color Bearer of these Regiments.

You will not be able to play any other regiment or branch. Artillery, Enginers, and the Ambulance Corps will also be locked away. Modded content, such as the Age of Napoleon mod or the First World War and Space Eras will also be available to players in a limited fashion.

Are you interested in attending huge organized Linebattles with hundreds of players? Then join our Discord and enlist with one of the Regiments (Clans) hosting organized events!

We will be hosting another large-scale Linebattle Event.
The Event will take place on the 26th June at 9:00 PM CET (3:00 PM EST).

This will be the perfect opportunity to stress-test our Server again- We managed to reach 500 players last time. Our Server can now theoretically hold up to 750 players, however, we do not know where the current practical limit is, so we urge everyone to attend the event! Let's find out how many players we can get on the Server before it starts to be noticeable!

Any Regiment is welcome to attend! Pre-Event Signups can be done here: CLICK ME

The Rules for the event can be read here.

We are happy to announce that the 8thVA and Thomas Legion are starting an 1863 Grand Campaign Civil War Event 8pm EST/1am GMT on Saturdays starting June 25th!

The Campaign Event will allow each team to decide how to win the American Civil War by picking where to attack and how to gain territory. The campaign map will include Virginia, West Virginia, Maryland, Delaware, and parts of Pennsylvania with many modded maps to represent these areas.

Each team takes turns deciding what tile to attack and how to achieve ultimate victory. The map contains 38 tiles each with its own unique terrain and perks.

Each Saturday an hour-long battle occurs to determine if a tile is taken or successfully defended. The map includes the states of Virginia, West Virginia, Maryland, Delaware, and Southern Pennsylvania. Each team has a limited amount of Artillery and Sharpshooters, make sure to use them carefully! Capture the enemy colors to gain points! Bonus cards are also a feature, these can be earned in specific battles and allow for various hidden actions!


We hope to see you on the battlefield soon!
/Flying Squirrel Entertainment

Today we release another large patch for Battle Cry of Freedom, introducing an all-new Era and Score system as well as the Prussian Faction for the Age...

Hello everyone! Today marks the release of Battle Cry of Freedom's most ambitious and largest update yet. After almost a month without updates, today's...

Battle Cry of Freedom! - Big Update on May 15th!

The latest update for Battle Cry of Freedom will release in just two days, on the 15th of May! We also have some news regarding several Linebattle Events...

A lot of people have asked me about the uniforms in v3, so here is the file you need to download, so that you have a good uniforms when you play.

The installation remains the same as the old versions: steam/steamapps/common/mountblade warband/modules/napoleonic wars/Textures Place all the "new ui...

A lot of people have asked me about the sword animations in v3, so here is the file you need to download which is from the first version of the mod, so...

A lot of people have asked me about the smoke in v3, so here is the file you need to download which is from the first version of the mod, so that you...

At the request of a large number of people, here is the last full version of powder and cartridge mod before the publication of mini-patch improving the...

I just want to know what program do you use to create mods for this expansion?

Is there actually a single player mod for napoleonic wars..? / Why does nobody use the models and the files to create such thing..? They would be a great addition to mods such as L'Aigle, wouldn't they..? Cheers

Today is a sad day.200 years ago the Great Emperor of France , Napoleon Bonaparte saw his dream end in Waterloo, but his legacy will forever be in our hearts.

Briliant stand-alone exp pack.It's excelent if you're in regiment.Trust me and buy this game !!! Its worth !!!

Hello. When I got NW on steam (On a Mac) I joined a Regiment. After a while I was given admin pass on some servers. The problem is when I tried to Press u or i to do admin / internal chat the bar popped up. I typed a recruitment message in but when I pressed enter nothing happened. I tried internal admin chat and the same thing. I tried global/team chat and it worked fine. Any advice?

It's hard to explain to people who haven't played Mount & Musket and participated in the community-organised line battles, what the game is really about. Mainly because there really isn't anything else like this on the market today to even compare it to. Line battles. So, Mount & Musket had a community of thousands of players who participated in weekly and daily line battle events hosted entirely by the community themselves. They re-enact line battles as they would have been at the time…